From top left, clockwise: butter chicken momo, Jhaneko chicken momo, mo mein, Chhola samosa at Momo To Go Kathy Tran
As of the moment when I’m submitting this article for publication, I’ve eaten 201 meals at Dallas-area restaurants in 2019. That is, well, plenty by anybody’s standard. And that diet, along with the ever-increasing stock of great Dallas restaurants, made narrowing down a selection of my top 10 favorite plates very, very hard. 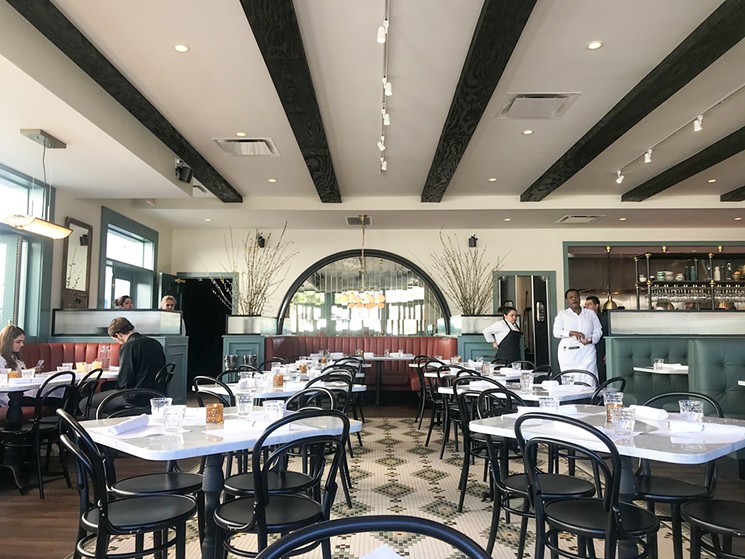 The interior at Beverley's on North Fitzhugh Avenue
Beth Rankin
Honorable Mention for Best Food of Which I Was Only Allowed One Bite: The double cheeseburger at Beverley’s

My friend ordered the double cheeseburger. She let me try one bite. The dry-aged beef, Tillamook cheddar, caramelized onion and ultra-intense “special sauce” (it has bone marrow in it) hit me like a bowling ball, but if bowling balls were made of happiness and tasted like a meaty epiphany. Grease, the good kind, ran down the side in a cheerful cascade. My brain’s decision-making apparatus was overriden by burger lust. Then my friend took it back and wouldn’t let me have another taste.

Beverley’s is so loud that my ears popped while dining. The noise is painful. But if you go soon, and if you see a guy sitting at the bar wearing over-ear noise-canceling headphones, showing the bartender a flash card that says BURGER PLEASE, well, you’ll know who it is. 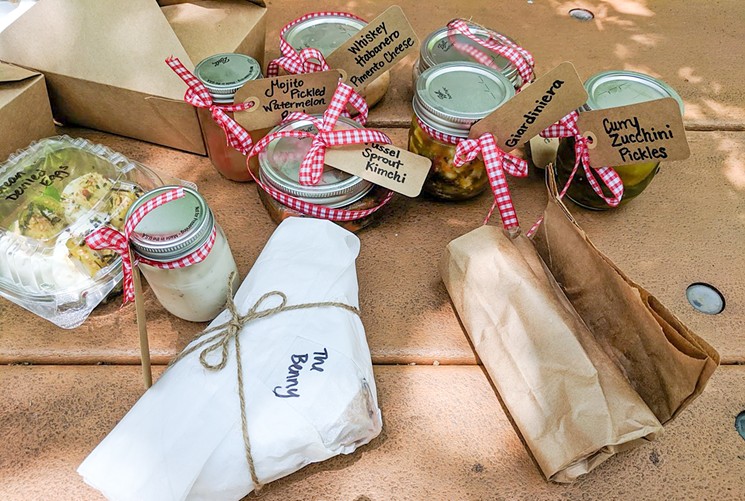 An enormous picnic spread from Butler's Cabinet in Fort Worth, which will soon expand to Dallas.
Brian Reinhart
Honorable Mention for Best Leftovers: A picnic basket by Butler’s Cabinet and Josh Harmon

When Butler’s Cabinet expands to Dallas next year, y’all might want to check if they continue the picnic basket catering situation they pioneered in Fort Worth. Ours — which I should point out was meant for two people — contained two sandwiches, four deviled eggs, a jar of pimento cheese, pickles, kimchi, pickled watermelon rind, whipped lardo, bacon pate and crostini. Oh, there was dessert, too. We lived off the contents for literally days. And if that’s not enough, we got to keep the jars and the insulated basket itself.

Nova is a regular spot for people who live around West Davis Street.
Alison McLean

10. Shrimp and Grits at Nova

What an abundance of shrimp! And what a rich, Cajun-style gravy they come in at Nova, Oak Cliff’s neighborhood diner. There’s a lot of andouille sausage in the gumbo-like stew that adorns these grits. It’s irresistible comfort food. 9. Jhaneko Momo at MoMo To Go

I spent a lot of 2019 eating Nepalese dumplings in Irving, like the spicy hot-sauce-slathered “chili momo” at Peak Restaurant and Momostop, and momos served in a bowl of broth at Cafemandu. But my favorite is jhaneko momo: dumplings that, immediately after they’re cooked, get tossed and coated in a mix of ground spices. Try them at their best at MoMo To Go, in a gas station on Northgate Drive. How do they make tacos stay so crispy in a pool of so much salsa? That’s the magical miracle at Maskaras Mexican Grill, where tacos ahogados are a specialty of the house. “Ahogado” means “drowned,” which is pretty much what happens to these perfect little creations of carnitas and corn tortilla. If you ask, they’ll serve the dish with colored tortillas that form a Mexican flag. 7. A “Spring Roll” and Other Goodies at Mot Hai Ba

At a special one-night-only dinner in August, Mot Hai Ba chef Peja Krstic teamed up with Fauna chef Peter Barlow to explore the crossovers and exchanges between French and Vietnamese cuisines. There were grilled sea creatures, a fiery seafood curry, clouds of liquid nitrogen and a 21-layer crepe cake. What sticks out in my memory, though, was Krstic reinventing the “spring roll” as a cucumber gelatin sheet wrapped around fresh crab salad.

If I’m remembering correctly, the white crumble was freeze-dried coconut milk. I’m not sure. There was a lot of wine on the table. When we open the Dallas Sandwich Hall of Fame, some of the plaques will be no-brainers. The Toddfather barbecue sandwich at Cattleack; the Italian Stallion and muffuletta at Jimmy’s Food Store; the torta cubana from El Rincón del D.F. (which is temporarily closed due to tornado damage); the patty melt at BrainDead Brewing; oh, and the lemongrass pork banh mi at Sandwich Hag.

Everything about this sandwich is the real deal. Tender, house-marinated pork; slices of jalapeño, which always seem to be twice as spicy as the jalapeños at my grocery store; homemade garlic aioli that squirts out to give the devourer a garlicky mustache; all in fabulous bread that shop owner Reyna Duong buys every morning from Quoc Bao Bakery in Garland. This is the kind of sandwich I order to go, then tear into before putting the car in reverse. Please note that chomping down on a bite of pork, cucumber and aioli while steering one-handed out of the parking lot onto South Lamar Street is, actually, not smart. It’s still early, but Ebesu, a new spot in downtown Plano, is looking like a potentially elite member of our Japanese food scene. We’re talking top five in the region. I’ll have a full review in early 2020, but for now, just know you should be driving to Plano and ordering ryoshi meshi, a $24 platter of three sake boxes filled to brimming with brilliantly vinegared sushi rice and slices of raw tuna, yellowtail, salmon and white fish.

That flavor party gets even better as Ebesu adds even more garnishes, including two kinds of fish roe. $24 may sound like a lot, but there are three of these glorious boxes, so you can share them with two friends. Or don’t share them. Think of it as a character test. 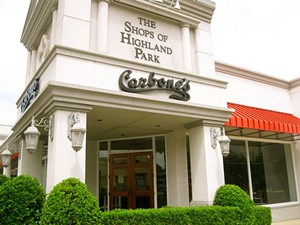 Sunday gravy is called that because Italian grandmothers of folklore made it by tending to a stewing pot of sauce all day Sunday. The interpretation at Carbone’s tastes, well, exactly like that. It’s served with funky curlicued creste pasta, and it is glorious.

When people talk about “deep” flavors, they usually mean complexity. When I talk about the depth of flavor in this Sunday gravy, what I mean is that I want to dive into a pool of it and live there. 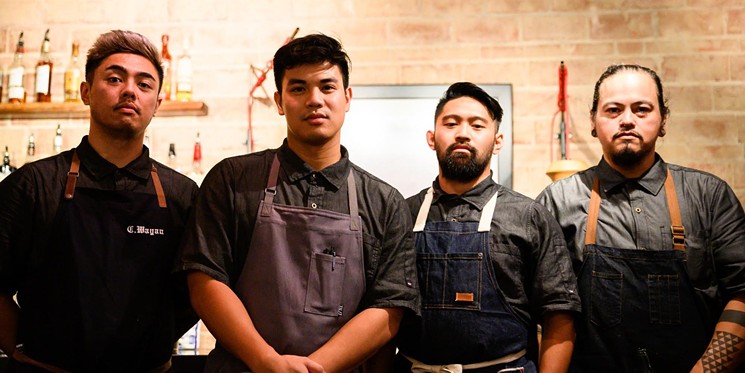 3. A Taste of Dallas’ Future at HagFest

A band of brilliant young chefs came together at Four Corners Brewing Company this year for HagFest, which helped eliminate medical debt for Reyna Duong (whom you may remember from the No. 6 spot on this list). The result was a glimpse into Dallas’ culinary future. Khao Noodle Shop was there with congee, and Duong scored a collaboration with Cattleack Barbeque, which has now appeared on this list three years in a row.

Momo Shack, a Nepalese dumpling pop-up that visits local breweries, served their excellent goods. But two Filipino startups, Ulam Modern Filipino Kitchen and Not Your Lola’s, stole the show with dueling riffs on pork belly. You’ll be hearing a lot more in 2020 about all of these businesses. They’re going to make Dallas an even more incredible place to eat. The most surprising meal I had this year was in Allen. Yes, Allen.

Stephan Pyles recently took his restaurant Stampede 66 on the road to this suburb. But the real destination dining in town is at Spice Thai Cafe, which from the outside looks like just about every other Thai restaurant in the Dallas area. Inside, though, ask for the Thai menu, which has only recently been translated into English. It’s a two-sided sheet of paper full of menu items that, in some cases, you can’t find anywhere else within 50 miles.

Look for stir fried crispy pork belly and green beans, or the lime-herb bomb that is the shrimp salad. Too Thai Street Eats in Carrollton serves hoi tod, a crispy pancake filled with mussels, but Spice Thai’s version has an airy lightness that’s almost like tempura batter.

The Thai menu isn’t secret, but it’s also not online, unless you count photos uploaded to Google Maps by the unofficial one-family Spice Thai marketing crew of Shane and Melissa Stephens. Study their photos, then make the drive north.

1. Pastas at Homewood and Sachet

Here is a flaming hot take that is going to inspire hate mail: Our city’s best pasta dishes are not at Italian restaurants. They’re at Homewood and Sachet, which crank out from-scratch noodles and surround them with ultra-seasonal bounties. Menus at these two spots, both on Oak Lawn Avenue, change pretty frequently, but expect unusual shapes, focused flavors and showerings of texture-adding ingredients like breadcrumbs or crispy pancetta.

Some of this year’s winners included Homewood’s cappelletti, a pasta folded into little hats and stuffed with spicy sausage and ricotta and served in Parmesan broth; a pasta with clams and clam sauce, also at Homewood, that beats many old-school Italian joints at their own game; Sachet’s ultra-comforting beef short rib ravioli topped with shards of crispy kale; and Sachet’s decadently spicy spaghetti alla arrabbiata with nuggets of lobster.

Writing that sentence made me hungry. Can we go eat now?
KEEP THE DALLAS OBSERVER FREE... Since we started the Dallas Observer, it has been defined as the free, independent voice of Dallas, and we'd like to keep it that way. With local media under siege, it's more important than ever for us to rally support behind funding our local journalism. You can help by participating in our "I Support" program, allowing us to keep offering readers access to our incisive coverage of local news, food and culture with no paywalls.
Make a one-time donation today for as little as $1.