Burgers With Benefits and a Fair Living Wage: the Best Chain Restaurants in Dallas-Fort Worth 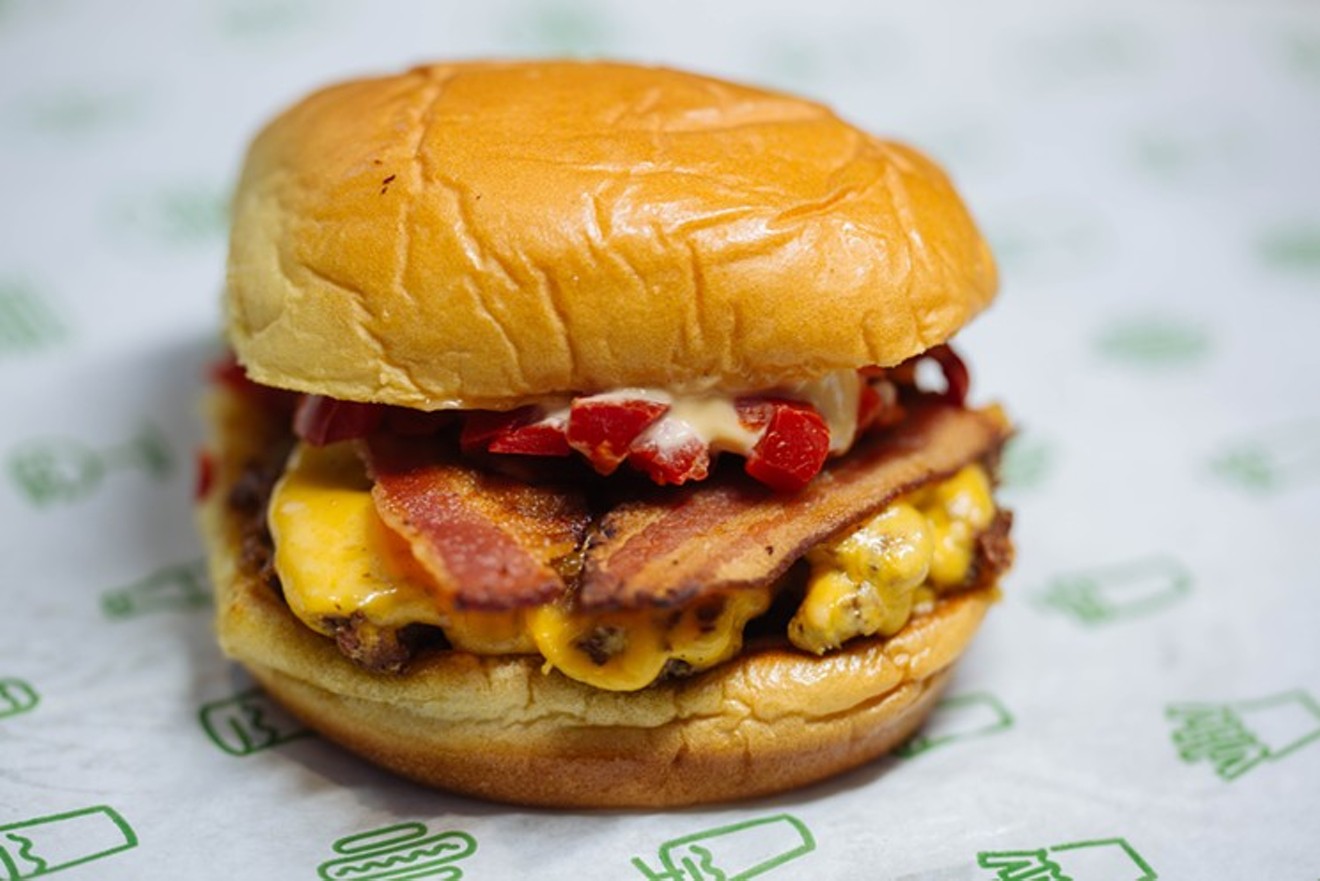 It's more than just burgers: Shake Shack also offers employees 401(k) matching and health insurance. Kathy Tran
In a city burgeoning with privately owned, chef-driven restaurants that are too often short lived, it’s easy to overlook Dallas' quality chain restaurants. Often viewed as low quality, unoriginal and unhealthy, chains are omnipresent for a simple reason: They’ve mastered the formula of meeting customer demand while also making a profit, and they’ve honed it so well that it can be replicated again and again, regardless of location. While chains can get a bum rap, sometimes deservedly, some serve great food while consistently keeping their ledgers in the the black.

But beyond profits and good food, corporate restaurants sometimes come with another perk: executives who create business models that are fair to employees. Historically, the hospitality sector has not been kind to those working in it. The server minimum wage has been $2.13 per hour since 1991, and there is no imperative to pay non-tipped employees more than the federal minimum wage.

Food preparation and restaurant serving is the lowest-paid profession in Dallas County, according to MIT’s Living Wage Calculator statistics, and getting employer-sponsored health care is rare. Server wages are made up of unpredictable tips, and many line cooks work at what is considered to be a poverty wage, meaning full-time employees could not fully support themselves while living in the county in which they work.

Chain restaurants have a unique opportunity to reinvent the traditionally top-heavy corporate model into places where people want to work, but the company's bottom line may suffer slightly. Some CEOs understand that investing in their workers nets an intangible profit beyond the monetary because happy, healthy employees provide better customer service and, not surprisingly, yield lower turnover rates. Basically, some CEOs grasp the radical notion that employees are people.

These are Dallas’ best national chain restaurants that are serving food you want to eat and offering their employees easy-to-access health benefits on top of fair wages, with starting hourly pay close to what MIT calculates as a livable wage for a one-adult household in Dallas County: $11.15 per hour. 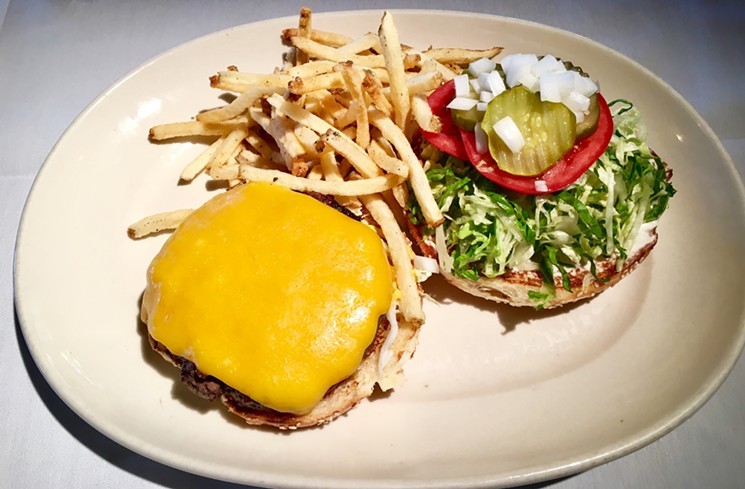 The Hillstone Cheeseburger and Kennebec fries for $17.
Nick Rallo
Hillstone
Named America’s Favorite Restaurant by Bon Appetit, the Hillstone Group is an example of everything done right in this business. Known for flawless attention to details, such as refreshing half-full cocktails with a new chilled glass, tables that are drilled into the floor so they never totter and a varied menu that consistently comes out tasting as good as, if not better than, a vogue chef’s food, Houston’s, Hillstone, R+D Kitchen and the newly opened Honor Bar make up the Dallas map of what has been rightfully called America’s best-run, most-loved chain.

Because the company shuns press, both initially for Bon Appetit’s coverage as well as this article, it’s hard to know exact details of its benefit package. A job search on its website, however, reveals that hosts start at $18 per hour with health and dental insurance available. Servers are also eligible for full benefits, enjoy a permanent weekly schedule and are treated to family meals on each shift. Even more surprising than the pay and benefits, Hillstone will hire servers with no experience, presumably because they’re easier to train. 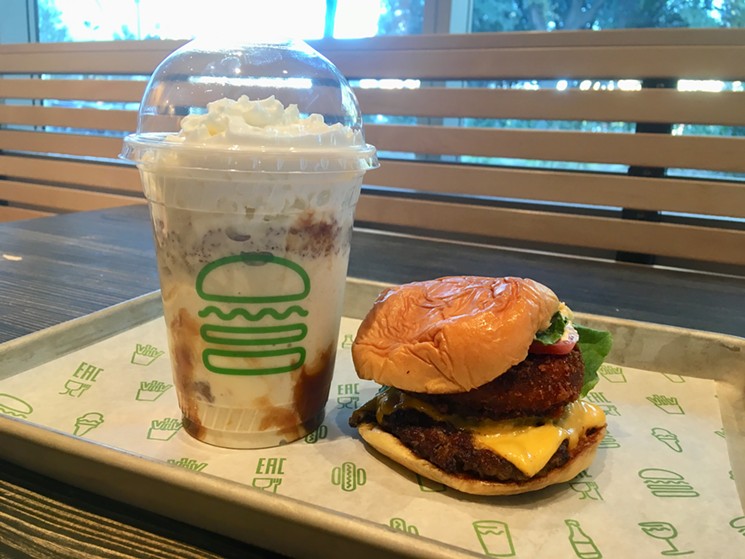 Shake Shacks often utilize ingredients from independent, locally owned businesses in each market where they operate. Dallas' Shake Shack uses ingredients from Dude, Sweet Chocolate, Pecan Lodge and Emporium Pies.
Amanda Albee
Shake Shack
This international chain with a cultlike following that includes President Barack Obama and Lorde began as a hot dog cart in Madison Square Park in 2001. When the now-famous founder, Danny Meyer, expanded it into a permanent kiosk that drew consistent daily lines, he realized he was onto something big.

Headquarters describes its cheeseburgers as classic '50s style. They're made with 100-percent all-natural Angus beef that’s ground each night and sandwiched between a non-GMO Martin’s potato roll. There are also gluten-free buns and a vegetarian roasted portobello option.

Each Shake Shack is unique to its respective area, and menus often include fare from local family-run restaurants. Dallas' Uptown location is the only place you can get the Link Burger, a cheeseburger topped with a Pecan Lodge jalapeño cheese sausage link. It also offers beers from DFW breweries and custard concretes blended with ingredients from Dude, Sweet Chocolate and Emporium Pies.

Line cooks start at $11 per hour, and all employees are eligible for health insurance, a pre-tax transit payment plan, short-term disability and a 401(k) matching program after three months. Managers go on an annual team-building retreat as well. Shake Shack further demonstrates its goal of being a community hub by hosting Shack Track & Field. On the second Tuesday of each month, people of all ages can meet for a 3- to 5-mile community run along the Katy Trail that includes a free drink on the Shack upon return. 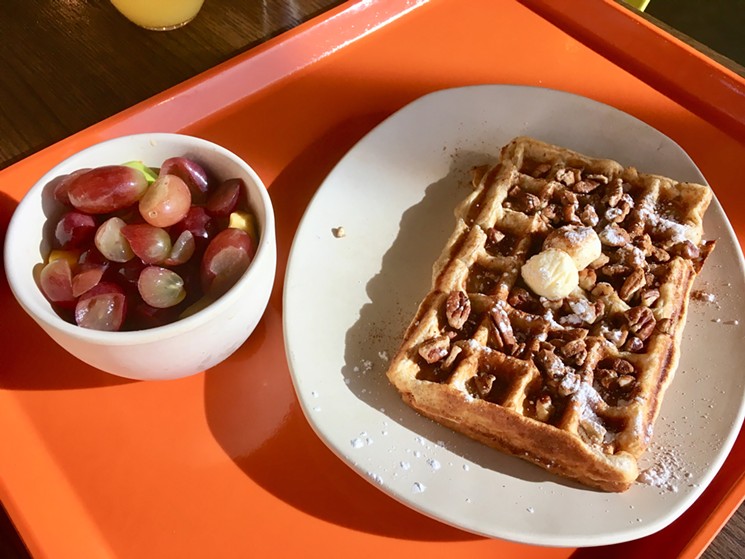 Modern Market serves quick, healthy fare all day, and full-time employees get full benefit packages.
Amanda Albee
Modern Market
This Boulder, Colorado-based chain’s motto comes from advice found in Michael Pollan’s The Omnivore’s Dilemma: "Eat food. Not too much. Mostly plants.” Its menu touts food made from scratch with ingredients delivered from farms, not factories, and caters to every diet: vegan, celiac, paleo, raw, South Beach, high-carb, low-carb and low glycemic index. Calorie counts are visible on the menu and are included on receipts, with full nutritional grids available upon request.

Modern Market is open for breakfast, lunch and dinner, and counter service makes it possible to get a fast, square meal at most any time of day. It may also be one of the cheapest places to drink in Dallas, with $2 glasses of house wine and $4 pints. Kids eat free after 5 p.m. Sundays and Mondays.

Self-described as a meritocracy, Modern Market starts its employees at $10.75 per hour, and they get frequent raises. Employees get a free meal with every shift and a 60-percent discount when they bring their friends and family in to partake. In addition, full-time employees get full benefit packages. 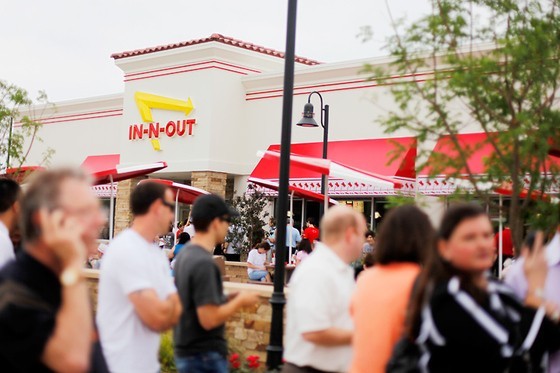 At In-N-Out, employees start at $12 per hour.
Patrick Michels
In-N-Out
Without determining who makes the best burger of In-N-Out and its Texan rival, we know which company would be the best to work for. In-N-Out offers a starting $12 per hour wage, and even part-time employees are eligible for vision and dental insurance. Whataburger, on the other hand, starts employees at a fluctuating rate of $7.25 to $10 per hour, depending on qualifications and store location.

In-N-Out’s store managers, who are promoted from within, make a handsome average salary of $120,000. Whataburger’s managers make between $31,000 and $49,000, according to Glassdoor, a website where employees anonymously review employers and share wage information. On top of the competitive pay, all In-N-Out employees receive paid vacations, free meals and a 401(k) program.

In-N-Out — established in 1948 by Harry Snyder, who held the roles of purchaser and cook, with his wife Esther as accountant — was California’s first drive-through hamburger stand. After closing, Harry worked in his garage to invent the first two-way speaker box so guests wouldn’t have to leave their cars to order. Thanks to him, we can order drive-thru in our pajamas, and parents can serve dinner to kids without leaving the car. Snyder’s core values were cleanliness, quality and service, and he believed his associates, as all employees are called, should be treated as family. Additionally, the burgers aren’t bad. 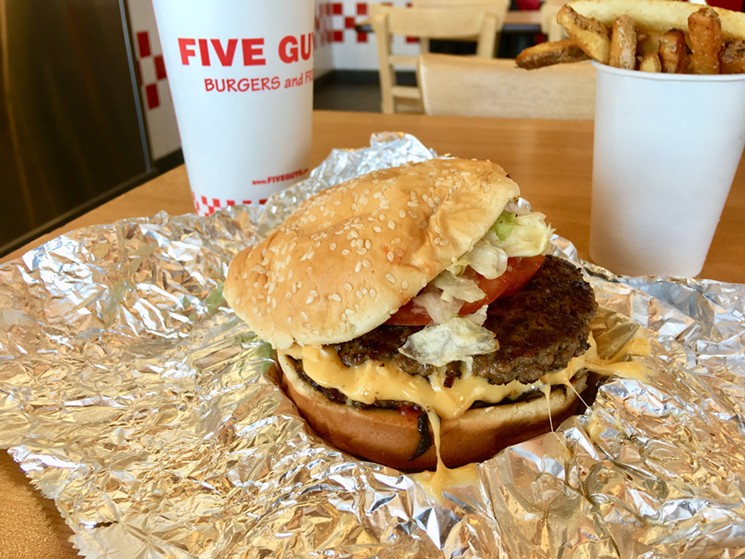 At Five Guys, entry-level employees make about $10 per hour, and full-time employees get health, vision and dental insurance.
Amanda Albee
Five Guys
The Murrells of Arlington, Virginia, gave their five sons a post-high-school ultimatum: go to college or open a business. Choosing the latter turned out well for them, especially after Five Guys sold 300 permits in the first 18 months after beginning to franchise. Today, there are 1,500 locations with another 1,500 in development.

Fun fact: Shaq, an avid investor, owns 155 locations. Maybe he likes the unlimited free toppings on the burgers, a rule that also applies to milkshake mix-ins, or maybe it’s the hand-formed patties that aren’t frozen. Five Guys adheres to strict rules for food prep — the award-winning peanut-oil french fries come only from Idahoan potatoes because of their density, and there are no timers in the kitchen since good cooks know when it’s time to flip.

Entry-level employees make about $10 per hour, and full-time employees get health, vision and dental insurance. There’s also daily opportunity for bonuses; if secret shoppers who come twice a day to every location give a thumbs up, the store gets $200 to $300 to split among the crew working that shift. Lastly, employees who get promoted to managerial positions get paid sick leave. 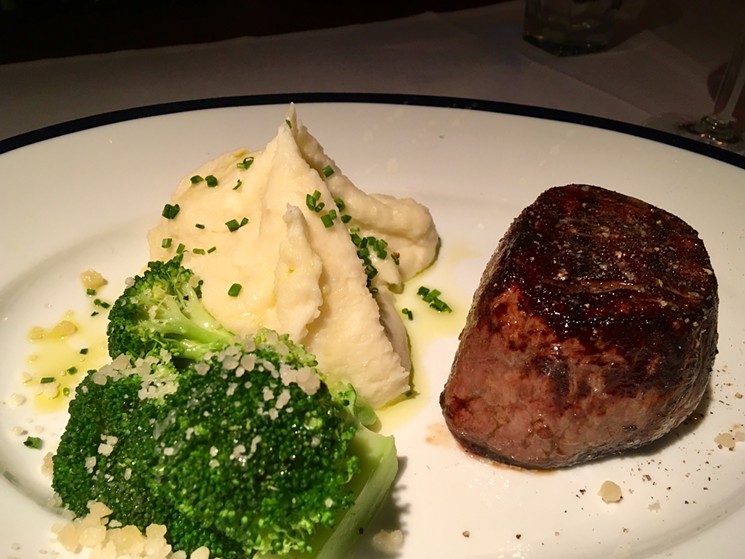 Affordable steaks aren't the only reason to love Texas Roadhouse — employees who work 32 hours per week are eligible for full benefit packages.
Amanda Albee
Texas Roadhouse
Texas Roadhouse, based in Mesquite and Garland, is probably the chain-iest of the chains on this list, but it’s hard not to like a place that carries a basket of hot yeast rolls and cinnamon butter to the table as customers are seated. Buckets of in-shell peanuts for snacking and affordable hand-cut steaks are easy to like as well. It's decidedly Western, so servers break out in line dances throughout the night, and many restaurants still have a “Willie’s Corner” with photos and signed memorabilia from former spokesman Willie Nelson.

Longevity is a badge of pride within the institution, and employees wear name tags that show their years of service as “Roadies." Roadies who work 32 hours per week are eligible for full benefit packages. Furthermore, managing partners, who are typically promoted from within, can earn up to 10 percent of store profits on top of their annual salaries with a $50,000 investment.

The company also features an employee outreach program named after its mascot, Andy the Armadillo. Employees can contribute as much or as little as they want from each paycheck to help their fellow Roadies whose families need help with medical or funeral expenses. And rather than fixed shifts, employees can choose the hours that work best for their schedules, a rarity in the service industry.