A Remodel and New Kitchen Bring Energy Back to Tillman's Roadhouse

The remodeled dining area brings back life to Tillman's Roadhouse. Kathy Tran
For years, Tillman’s Roadhouse felt like it was playing second fiddle. As crowds swarmed other Bishop Arts restaurants on Friday nights and Sunday brunchtimes, Tillman’s often seemed a little neglected. A brutal no-star Dallas Morning News review in 2012 didn’t help. Among my friends, the restaurant was known, at best, as a backup plan for when the wait at Oddfellows grew too long.

Jeffrey Kollinger, owner and head chef of Tillman's Roadhouse
Kathy Tran
When new owners, brothers Jeffrey and Ross Kollinger, purchased Tillman’s last summer, they appeared to be aware of this reputation. The first order of business was a remodel of the hunting-lodge-for-bros interior and a total makeover of the kitchen. Chef Michael Morabito was brought in to hit the reset button on the menu, while the Kollingers revisited the decor. The result is a little strange: a brash, over-the-top restaurant that, behind all its swagger, serves some good food that nails the basics.

The concept of the new Tillman’s Roadhouse is, admittedly, one that tries my patience: a Texas roadhouse, but “elevated.” The wood-paneled interior fairly glows red under the neon light of a Dallas Pegasus, and on busy nights, the restaurant gets unbearably loud. A few years ago, I went on a dinner date to Tillman’s and we spent the whole meal smiling at each other, unable to talk. Recent remodeling hasn’t fixed that.

Fried okra, served whole, at Tillman's Roadhouse
Kathy Tran
The changes to the menu are dramatic but not surprising: burger, pork chop, quesadilla, fried okra. Well, it might be surprising that the shrimp and grits clock in at a mighty $28. And it is perplexing to see language as eye-roll-inducing as “Chef Michael’s Inspired Daily Soup.” Grand language is a signature of Michael Morabito, who previously had jobs with Dean Fearing, at Hibiscus and as executive chef at a large, never-completed Alaskan copper mining site. His LinkedIn page features quotes like “I am an incredible Executive Chef” and humblebrags like “I had the best cooking job west of the Mississippi” (at Caesars Palace in Las Vegas), plus the story of the time he cooked backstage for Van Halen.


The concept of the new Tillman’s Roadhouse is, admittedly, one that tries my patience: a Texas roadhouse, but “elevated.”

But get this: The food at Tillman’s exceeds all expectations. Take those fried okra ($10): They’re terrific, served whole and crusted in crushed pecans. A pimento cheese dip was similarly hedonistic before it got removed from the menu in early spring. The seafood plate of sea bass and shrimp impressed us even more, the bass seared brown yet fork-tender, the shrimp flawlessly fried with a breading meant to evoke hush puppies ($34). Underneath, the Tillman’s kitchen added a mixture of Brussels sprouts and parsnips that would be good for converting Brussels haters; sauté anything in this much butter and it will taste special. 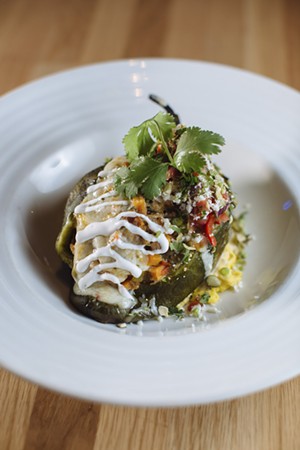 Chile relleno stuffed with carnitas and covered in pepitas
Kathy Tran
There’s also a clever, slightly charred crepe filled with creole dirty rice, which is a satisfying multi-textured carb party. It comes, however, under distinctly weird grilled quail ($25), which tastes good dressed up in a pomegranate marinade, but has the chewy mouthfeel of overcooked meat. To be clear, it’s not actually overcooked, or undercooked for that matter. What’s happening is that the quail spends too long in the marinade and its tissue breaks down – that’s why the safely prepared bird looks as pink inside as a rare steak.

That, and a newspaper-gray side of sage and pepper with hints of mushroom ($7), are the only major missteps we found. Tillman’s is doing even better at brunch, with a huge bowl of huevos rancheros ($17) that’s got good depth of flavor, plenty of black beans and serious spice, plus a terrific chile relleno ($14) stuffed with carnitas and covered in pepitas, nuts and other texture-giving garnishes. Underneath the chile, though, was an unappealing, overcooked cilantro omelet.

Brunchtime’s Instagram star is a generous fried chicken portion draped in two long bacon slices and served on a Texas-shaped waffle ($15). Yes, it’s silly, but although the Tillman’s chicken batter would be perfect with a bit more spice, this is one dish where silliness doesn’t hurt. Go ahead and indulge, especially when the silliness comes paired with serious work to get the food right.

Indeed, the restaurant as a whole embraces its over-the-top side, shamelessly flaunting its Texas pride. Away from the meal itself, that can get a little annoying. Tillman’s menu seems geared to irritate; how many people know offhand that CFSS stands for chicken-fried steak sandwich? The bar area is undecided as to whether it’s sports-oriented; the impressive list of American and scotch whiskeys is matched by a pretty dull selection of wines, all available by glass and bottle, almost all available at the nearest Kroger.

The Texas-shaped waffle topped with fried chicken, bacon and powdered sugar
Kathy Tran
The atmosphere at Tillman’s is all about superficial style; that’s why, as good as the food almost always is, it’s mostly served using the time-honored tactic of Piling Stuff On Other Stuff. That quail is a perfect example: quail piled on a crepe, with chewy sweet potato “chips” piled on top of the quail, with greens piled on top of the chips, and pomegranate seeds tossed on top to finish. The first step in enjoying this meal is to raze the edible skyscraper.

But, as much as I can complain about the focus on liquor to the detriment of beer or wine, or silly menu puffery like “Tortilla Soup Tribute #4,” or the occasional loudness, or the prices that often feel a bit too high, or the underseasoned, lackluster burger ($16), I have to concede that most of the food is pretty awesome. Every so often, I get a wistful feeling about that pecan-crusted okra, or the simple excellence of the seafood.

Truthfully, this restaurant’s flaws are not so hard to address. The kitchen is doing rock-solid work, and the waitstaff is accommodating and professional. Tillman’s may be calibrated for the Snapchat set, but they’re serving up respectable food.

So sure, grab that Texas-shaped waffle. Go ahead, pay a little too much for shrimp and grits. At Tillman’s, indulgence can pay off.