The State of Barbecue in Dallas: The Old Guard, Revolutionaries and Social Media A beautiful barbecue spread from Smokey Joe's BBQ Kathy Tran
At its core, barbecue is a study in heat and time and the transformative powers of both to turn something raw and unappetizing into something eminently desirable and sublime. Similarly, we've watched Dallas' barbecue scene transform over the years like a brisket after an all-night cook. Texas' barbecue lore is steeped in small towns, while bigger cities like Dallas were rarely thought of as meccas of good barbecue.

But with the resurgence of the Central Texas-style of barbecue that ignited the "craft" barbecue revolution, Dallas' barbecue scene naturally evolved, and over the past decade or so, we've watched the city birth barbecue joints now mentioned in the pantheon of greats. While the city's barbecue history may not stack up to the Hill Country's, it's still home to long-running spots. These old standbys, along with the restaurants that took root in the barbecue boom, influence the upstart barbecue joints that are still writing their own stories before our eyes. In the first decade following the turn of the century, Dallas’ barbecue scene was a big city melting pot. Part of this stems from barbecue’s Texas roots. If you find someone who grew up in Texas, chances are they had a barbecue restaurant in their town that was the go-to. And as Texas native and current Observer food editor Lauren Drewes Daniels once explained to me, “Small towns don’t eat other small towns’ barbecue." (Editor's note: especially if we play them in football.)

Dallas is a big city, and big cities meant catering to the masses, not the small towns where celebrated Texas barbecue made hay. Chains like Dickey’s, Spring Creek or even Dallas native Sonny Bryan’s serve barbecue that feeds the masses, but without the artistry. That’s not to say Dallas didn’t have gems.

In 1976, John Reaves opened Big John’s Barbecue on the corner of Lemmon and Mockingbird, and after a fire in the pit room filled the restaurant with smoke, he renamed his restaurant Smokey John’s.

"Since the '70s, the essence of who our dad was and the service he provided is still the same," says Brent Reaves, who along with his brother Juan, took over their father's restaurant. "Those intangible things are the reason why people become repeat customers."

In 1978, James Meshack opened the first of four eponymous barbecue joints in southern Dallas. Meshack’s daughter Donna took over the Garland location when her father died suddenly in 1986. And in the Cedars, Tennessee native Clarence Cohens brought his own Memphis-style barbecue influences to Texas when he opened Baby Back Shak in the late-90s.

While spots like Smokey John's, Meshack's and Baby Back Shak have their history, it doesn't mean they're immune to change.

"We have had to step our game up. Our brisket process only takes three times longer than it did 10 years ago," says Reaves. "We’ve changed some of our family recipes to create more flavor. We didn’t want to be left behind."

These and many other restaurants still practiced the art of barbecuing and built their own loyal followings in a time before social media, when the internet was past its infancy but still a toddler. Things would change soon enough. 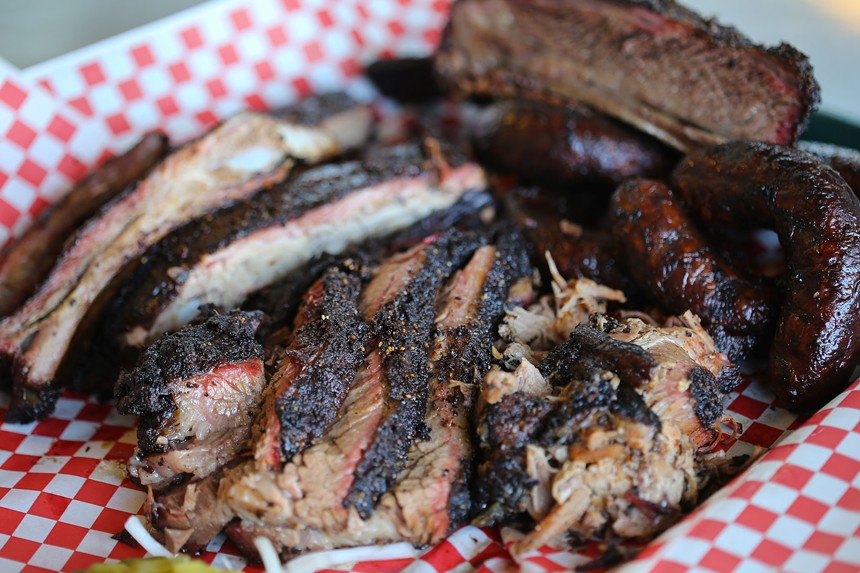 It used to take years of hard work for a barbecue joint to gain a loyal following. Then came social media. A new generation of pit masters came onto the scene, and what they lacked in provenance, they made up for with dedication to the way barbecue had been made by the old masters. The timing was perfect, as the internet had birthed a new type of food fan, one who shopped in farmers markets, drank craft beers and shared their findings on social media. Barbecue had gone viral.

Barbecue’s boom swept up the new joints and old ones alike. Pecan Lodge put Dallas on the barbecue map in 2010 with lines that snaked through the Dallas Farmers Market and a nod from Texas Monthly as the second-best barbecue in the state in 2013. Pecan Lodge's start came after Justin and Diane Fourton quit their jobs as consultants to open a barbecue catering business. While catering built their reputation, the Fourtons learned of the City of Dallas' plans to redevelop Shed 2 of the Farmers Market into a specialty food building. Pecan Lodge's modest counter in Shed 2 quickly became the center of the Dallas barbecue universe. Around the time their reputation started its meteoric rise, other soon-to-be Dallas barbecue legends were in their infancy.

Cattleack Barbecue was a time filler during retirement for Todd David — a catering operation in a small warehouse in Farmers Branch. Customers eventually convinced him to open for lunch one day a week. David's barbecue was good, but he struggled with getting consistent quality beef from his suppliers.

"I just wasn’t thrilled with the bigger companies, and just how up and down their products seemed to be," David recalls. His supplier told him about a ranch in Central Texas raising Akaushi beef, one of the four breeds known as wagyu. After getting his hands on HeartBrand's wagyu brisket, David knew he'd found the consistent quality he was seeking.

In the Design District, Maple and Motor’s Jack Perkins launched Slow Bone, promising quality barbecue for the masses. Barbecue's booming popularity meant long lines and quick sellouts at places like Pecan Lodge and Lockhart's. Perkins claimed to have solved the riddle and promised extended hours with no sellouts and no selling of yesterday's leftovers. Perkins had plenty of experience running Dallas' Maple & Motor burger restaurant, but the foray into barbecue was uncharted ground for the restaurateur. Not long after opening, Perkins hired longtime Dallas chef Jeffrey Hobbs to bring a chef's sensibility to the barbecue world.

And in Fort Worth, Travis Heim had started doing pop-ups to scratch his meat-smoking itch, which turned into the lauded Heim Barbecue food truck in 2015. Brisket burnt ends were already regarded as a bite of barbecue nirvana, but Heim turned the burnt end on its head when he began curing seasoning cubes of pork belly then blasting them in his smoker. Heim's bacon burnt ends became the talk of the town, and Heim's success led to a Dallas location in 2020.

As much as we think barbecue’s popularity might some day peak, we’ve given up trying to predict when it’s going to happen. New entrants jump into the fray with regularity, influenced by the successes of their forerunners as well as the legendary names in the business. But with a cuisine so rooted in tradition, the question becomes one of how to stand apart.

For some, like Kris Manning’s Smokey Joe’s BBQ, that meant relearning everything he knew about barbecue after buying his father’s restaurant in 2013. Manning added a pair of new offset smokers to the restaurant, then painfully removed the old steel and brick smoker his dad built in 1985.

"They kept causing fires," Manning said, having realized he couldn't risk his restaurant because of sentimentality. While being conscious of his customer base who loved his dad's barbecue, Manning knew he would need to evolve to stay relevant.

“Growing up, I would go to my dad’s restaurant, and I would never go eat at other barbecue places,” Manning told us in 2020. “Now that’s what I love to do, is go to different barbecue places." Manning's success has come from keeping his long-time customers happy while turning out barbecue that has fans across the area raving.

For other newcomers, barbecue is being blended with other cultures and cuisines with excellent results. In 2018, Zavala’s Barbecue in Grand Prairie taught us that brisket can still be stellar when you serve it with tortillas and his magical green salsa. Blending Zavala’s Hispanic heritage with Texas’ signature cuisine yields impressive results. And in East Dallas, Loro brings a touch of Asia to Texas from chefs Tyson Cole of Uchi and Aaron Franklin from Franklin Barbecue. Helmed by masters of their respective cuisines, Loro blends two styles of cooking in new and imaginative ways.

While we're certainly students of tradition when it comes to Texas barbecue, the history of the fare, itself a melding of traditions and cultures, is something we'll always respect, especially when a barbecue joint shows that level of pride in the menu. But it's hard to ignore where barbecue is heading, as yet more merging of cultures and cuisines is producing barbecue that's still top-notch with unique twists that yield something new and exciting. Texas is a big state, and at our big barbecue table, we're thrilled when both old school and new school joints have a seat to share their stories.

Read here to learn what we consider to be the essential barbecue of Dallas.
KEEP THE DALLAS OBSERVER FREE... Since we started the Dallas Observer, it has been defined as the free, independent voice of Dallas, and we'd like to keep it that way. With local media under siege, it's more important than ever for us to rally support behind funding our local journalism. You can help by participating in our "I Support" program, allowing us to keep offering readers access to our incisive coverage of local news, food and culture with no paywalls.
Make a one-time donation today for as little as $1.