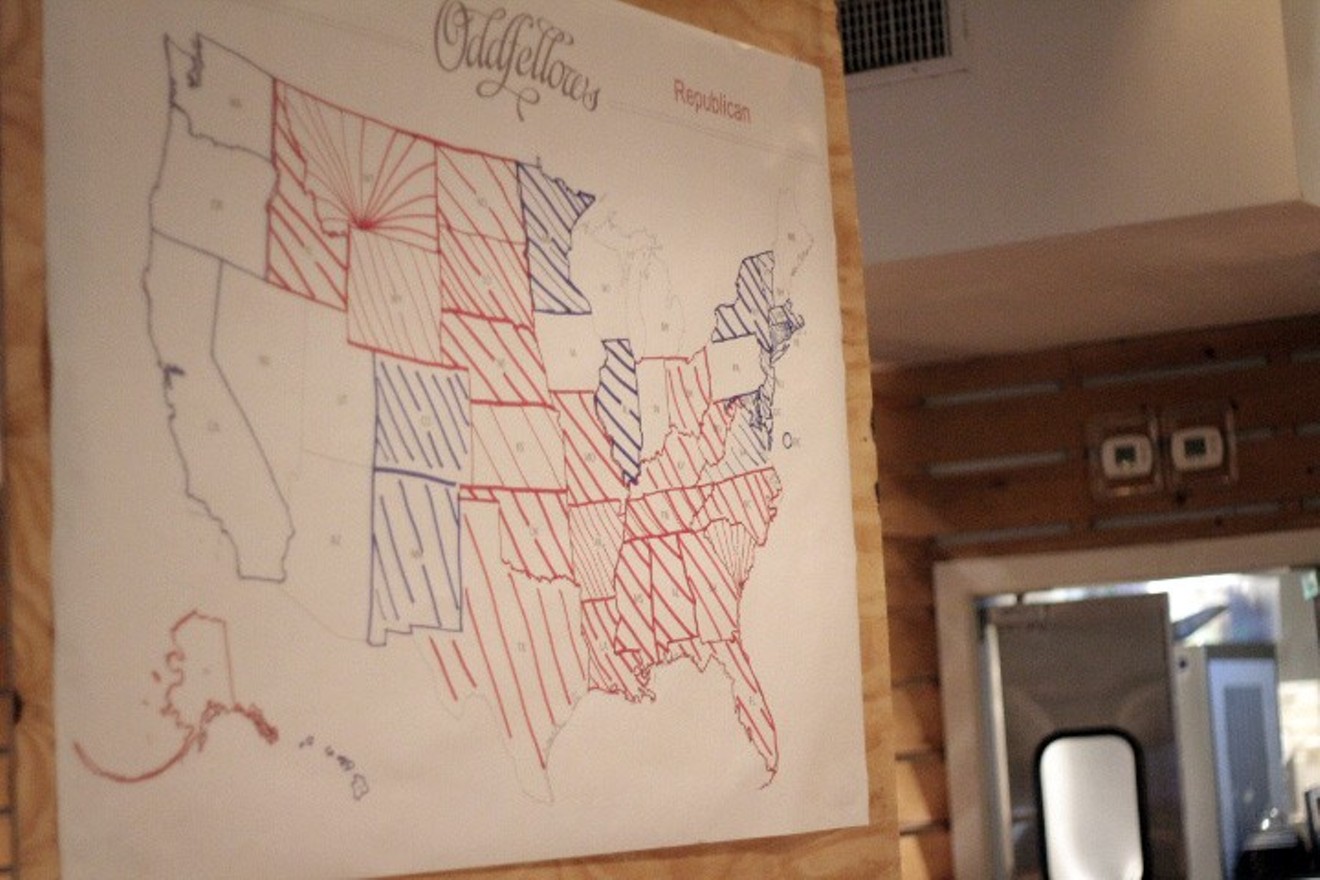 Oddfellows goes all out for election night watch parties in every major election, much like they did here in 2016. Ijeoma Onyekwe
With unprecedented voter turnout in this year's midterm elections, there's a lot of electricity in the air today — and a lot of people who may feel compelled to sip an adult beverage or two while watching the returns come in. With all the attention on the Texas midterms, there are more election watch parties than ever. While there are a lot of events at hotels and churches, we've focused on parties at Dallas bars and restaurants. When watch parties are obviously partisan, we've noted as such in the event details.

If your bar or restaurant is hosting a party that we've missed, email [email protected] and we'll add the event to the list.

Stonedeck Pizza Pub
2613 Elm St. (Deep Ellum)
Stress-eat some pizza at Stonedeck while you sip $2 Lone Stars. The party kicks off at 9 p.m.

Mac's Southside
1701 S. Lamar St. (The Cedars)
Too nervous to watch every moment of the returns? Mac's Southside will host trivia early in the night and says they'll offer food and drink specials throughout the evening, starting at 7 p.m. This is a bipartisan event, but the crowd tends to skew Democrat.

Libertine Bar
2601 Greenville Ave. (Lower Greenville)
Life, Libertine and the pursuit of happy beers: Libertine kicks off its party early, at 4 p.m., with two special beers on draft: BrainDead Brewing's Frog IPA and Four Corners' Heart o' Texas red ale. Show your "I voted" sticker (or a selfie from early voting) and get either brew for only $3. You'll also get 10 percent off your bar tab with proof of Texas voter registration.

Oddfellows
316 W. 7th St. (Bishop Arts)
Oddfellows is known for its massive election night parties, and this year is no different. Watch the returns on the big screen with sound while you sip half-priced draft beer and cocktails on special. Oddfellows' party isn't overtly advertised as leaning Democrat or Republican, but the crowd at this Bishop Arts bar and restaurant tends to skew Dem on election night.

The People's Last Stand
5319 E. Mockingbird Lane (Mockingbird Station)
The People's Last Stand does not claim to be Republican nor Democrat, but the Mockingbird Station cocktail bar does believe three things that "every sane American can agree on," according to their Facebook event page: "1. Kanye West should not be elected president. 2. The Earth is not flat. 3. Every vote in every election matters." The bar will have food and drink specials all night.

Double Wide
3510 Commerce St. (Deep Ellum)
Double Wide is hosting a special election night edition of Two-Steppin' Tuesday. Drown your sorrows or celebrate victory to the sounds of classic outlaw and old-school country, western swing, rockabilly and Americana from 9 p.m. to 2 a.m. There's no cover and $2 Lone Star and $5 Pendleton Whisky all night.

Easy Slider
2701 Main St. (Deep Ellum)
It's not a secret as to who this Deep Ellum burger joint is rooting for; the restaurant has been a Beto fan gathering spot throughout the election. The party starts at 7:30 p.m. on election night.

Round-Up Saloon
3912 Cedar Springs Road (Cedar Springs)
The Stonewall Democrats of Dallas are throwing an election night watch party that kicks off as soon as the polls close at 7 p.m. They'll be showing both state and national returns on multiple screens. 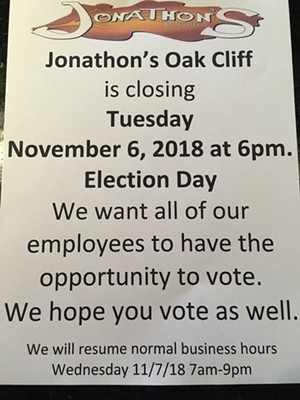 Some restaurants, like Jonathon's in Oak Cliff, are closing early to enable their employees to vote before the polls close.
Courtesy Jonathon's Facebook page
RHBQ
9810 N. Central Expressway (North Dallas)
John Turner, a Democrat running for Texas House District 114 in North Dallas, is hosting a watch party at RHBQ starting at 6:30 p.m. on the patio at RHBQ.

Sundown at Granada
3520 Greenville Ave. (Lower Greenville)
Nathan Johnson, a Democrat running for Texas Senate District 16, is hosting a watch party (with free drinks and "light bites") on the upstairs patio at Sundown at Granada starting at 6:30 p.m.

Jack Mac's
19009 Preston Road (Far North Dallas)
Looking for a bipartisan election watch party? Jack Mac's has you covered. They'll have live coverage on every TV and on the big screen.

Punk Society
2723 Elm St. (Deep Ellum)
If you feel more like drinking and dancing than keeping your eyes glued to the TV, Punk Society will have cheap drinks, loud EDM and no cover. The after-party starts at 10 p.m.

Ten Bells Tavern
232 W 7th St. (Oak Cliff)
Curl up with the kitties of Ten Bells while you watch the returns and sip $3 wells all night long.

Yummy BBQ & Burgers
8300 Preston Road, Plano
From 8 p.m. to close, everything on the menu is 15 percent off and Yummy will be screening live election coverage.

Chicken Scratch/The Foundry
2303 Pittman St. (West Dallas/Oak Cliff)
If you're looking for an official Beto watch party with fried chicken, craft beer and a killer patio, Chicken Scratch is the place to be. The event kicks off at 7:30 p.m.
KEEP THE DALLAS OBSERVER FREE... Since we started the Dallas Observer, it has been defined as the free, independent voice of Dallas, and we'd like to keep it that way. With local media under siege, it's more important than ever for us to rally support behind funding our local journalism. You can help by participating in our "I Support" program, allowing us to keep offering readers access to our incisive coverage of local news, food and culture with no paywalls.
Make a one-time donation today for as little as $1.