Val’s Cheesecakes' Owner Has Something to Say: Vote

But this week, he decided to change that.

“I have resisted, for the past five years, of bringing up any political views, any religious items, anything that doesn’t have to do with cheesecake really, anything that is creating conflicts, that can create a type of argument. I try to avoid that with my business,” he says.

The catalyst? The death of George Floyd, whose cries for his late mother while a police officer jammed his knee into his neck ignited something in Jean-Bart.

“I literally broke down in tears because I have a story with my mom,” Jean-Bart says. “George Floyd was yelling and crying for his mom. It is pure terror, it's pure horror, mixed in with this hope, even though he knows his mom passed away, there’s still this hope his mom hearing him can get him out of this.

Finding My Voice: Val's Cheesecakes has been a daily tribute to my mother over the past 7.5 years and rightfully so. As I continue to grow as a human being, I find it crucial to also find my voice and communicate what is important to Val. These days my heart has been asking how can I leverage social media equity, leverage the local and state voting power, and leverage community resources. This is why I've been posting more about the values and initiatives that are important to me as well as trying to maintain a cheesecake business. To start the process, I started @LeverageDallas and will be routing my community organization posts, stories, efforts to that account and then return to a more cheesecake bakery feed with a touch of social awareness with @ValsCheesecakes. (please follow @leveragedallas )! - @LeverageDallas is in its infancy and the next steps needed are: forming the entity legally, building a functional website, and most importantly leveraging Val's and Val's Cheesecakes "resources". I need your help and would appreciate feedback or "resources" to construct a solid foundation for this endeavor! I know what a community can accomplish and I am the product of our beautiful #DFW community on all levels...Thank you ????????! - #foodhallatcrockettrow #hallcrawl #foodie #nomnom #food #dfw #dfweats #bigd #dallasfoodie #dessert #valscheesecakes #dallas #fortworth #dallasfood #fortworthfood #dallaseats #fortwortheats #local #local4local #sweetdisposition #cheesecake #cheesecakes #dallasdessert #fortworthdessert #dallasdesserts #fortworthdesserts #foodhallatcrockettrow #crockettrow7th #crockettcraves #crockettrow


“My Instagram, the past history, the writings, it's never been about my own views. So these days I am literally working on finding my voice, because I know my mom would appreciate that, she would if she was here, she would say, 'Hell yeah,' so it's very important for me these days not only to talk about cheesecakes and to not only honor my mom, but to find out who Val is,” he says.

As food critic Brian Reinhart wrote this week, when people around food vocalize opinions outside of the industry, people complain. Especially if they disagree with you, you'll hear, “Just stick to the food.”

But Jean-Bart is pushing forward because he's looking to do something that goes beyond indulging in a dessert: He wants to get you to vote.

With Leverage Dallas, he's aiming to bring people together and to have conversation. But the big thing he's about in this effort is to rally people to vote, especially in local elections.

“Lawyers, doctors, political people, they come and get cheesecake. I have Trump supporters, Biden supporters — all kinds of people show up to get a cheesecake. And when they are in the store or at the window, some of them, I do know their political views,” he says. “It's amazing at that moment at the window or inside of the store, they are talking to each other, they’re all having a good time, they’re all proposing to each other: Try this, try that, put the sea salt on top of the turtle.

“It's suggesting that telling another person, ‘Give it a try, try something else, let's work on another perspective on another flavor,’ so why couldn’t that be translated into greater conversations?”

He's hoping to bring that phenomenon under the umbrella of Leverage Dallas, where people who have large social media followings can utilize their equity, as Jean-Bart puts it.

And then, get people to vote. 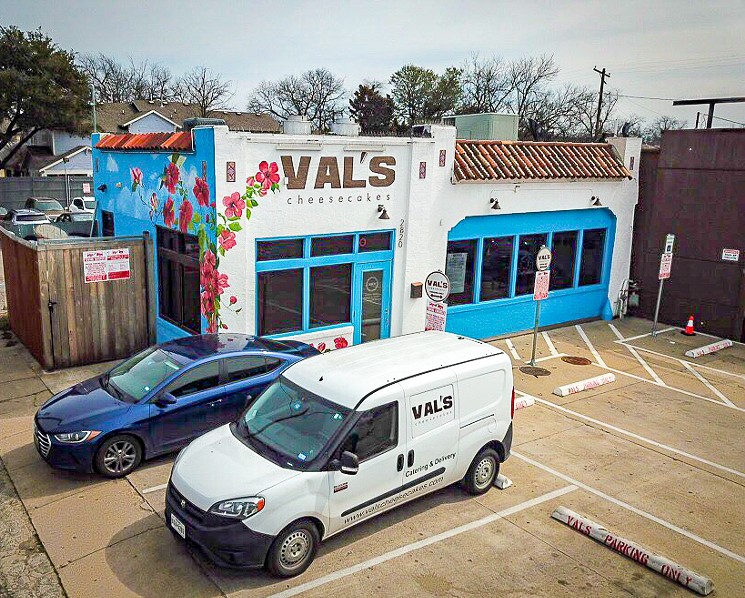 Val's Cheesecake on Lower Greenville
courtesy of Valery Jean-Bart
In fact, Jean-Bart has been participating in recent protests in Dallas — you'll know it's him because he's the one shouting, “Are you registered to vote?" “Go vote in March.” “Nov. 3 will be the biggest march.”

Jean-Bart is meeting with people to figure out the next steps: organizing the effort, possibly becoming a nonprofit, etc. Right now, he's raising money to give to five organizations — ones that are still being selected but will focus on equality. The goal is $10,000 and after one day, the total was $3,571.

He has a question for many of us who give a shit about things that affect our daily lives from local governance.

“So many people in District 2 don't know how much impact they can have if they vote,” he says. “Why is it? There must be a reason. What is the disconnect between voting at the council member level? Why are people not interested in that?”

Maybe he'll find out.
KEEP THE DALLAS OBSERVER FREE... Since we started the Dallas Observer, it has been defined as the free, independent voice of Dallas, and we'd like to keep it that way. With local media under siege, it's more important than ever for us to rally support behind funding our local journalism. You can help by participating in our "I Support" program, allowing us to keep offering readers access to our incisive coverage of local news, food and culture with no paywalls.
Make a one-time donation today for as little as $1.