All About The Grind: Big Al's Smokehouse BBQ Has Served Up Solid Barbecue for 49 Years And Counting

Big Al's Smokehouse BBQ has been a Dallas landmark for 49 years and counting. Chris Wolfgang
"It's all about the grind."

So says Lauran Weiner, owner of Big Al's Smokehouse BBQ in Dallas, And though we're talking about the simple salt and pepper rub that Big Al's uses on its brisket, we could just as easily be reflecting on the work that Weiner and her team do to keep her family's barbecue churning along as they approach 50 years in business.

Weiner's father was Al Plaskoff, a meat salesman at Farmer's Meat Market in downtown Dallas in the '70s. He sold beef and pork to the big barbecue restaurants of the day. In 1973, Plaskoff had a chance to buy Loren Brown's BBQ on Inwood Road. Brown was one of Plaskoff's customers, and according to Wiener, was concerned that the opening of DFW Airport and the forthcoming Wright Amendment restricting flights from nearby Love Field would cripple his business. Instead of taking an order for the week's meat, Plaskoff made an offer the buy the restaurant.

Lauran Weiner is the owner of Big Al's Smokehouse BBQ.
Chris Wolfgang
"My dad asked him how much he wanted for the restaurant and was down here with a check that afternoon," Weiner told the Observer.

In 2008, Paskoff moved Big Al's up the street to the current location, 3317 Inwood Road. After Weiner and her family moved back to Dallas, she started helping in the restaurant in 2013. Originally on the catering side, she eventually assumed more responsibility as her dad got older. Plaskoff passed away in 2018, and Weiner took over the business.

"I feel a responsibility to this place," Weiner said. "Between our customers and the people that work here, it really is a family." 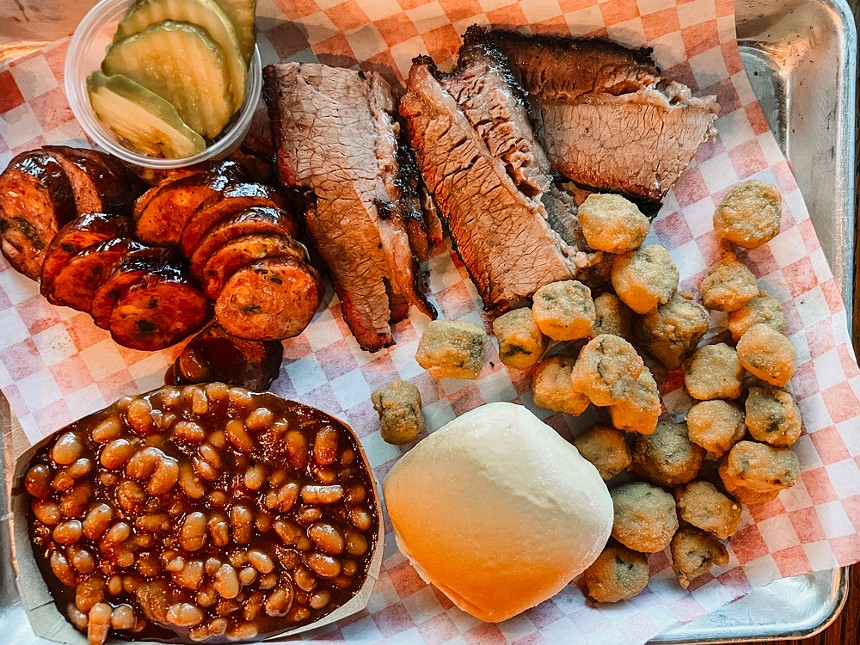 Sampling the hits: a two-meat tray with beans and fried okra hits the spot.
Chris Wolfgang
Weiner's commitment to keep Big Al's quality at a high level starts with the proteins, of course. On a recent visit, two of us each ordered our own two-meat plate ($16), one with brisket and a jalapeño cheese sausage, the other with turkey breast and pulled pork. Our lean slices of brisket were delightfully tender, if sliced a touch on the thin side. Big Al's brisket doesn't have that big pepper bark like a lot of craft barbecue spots, but that's by design.

"I can only eat about two bites of that style," Weiner said. "Ours has a little fat left, but just some salt and pepper and smoked with wood."

The sausage (sourced from Rudolph's in Dallas) had the appropriate snap and spice combo, and we were pleased to see turkey breast on the menu. Big Al's version is succulent and smoky and would make a killer sandwich (which you can get for just nine bucks). Pulled pork comes pre-sauced, which might make the purists mad, but it's delectable nonetheless.

Big Al's won't sell you a four-meat four-side tray, but a pair of two-meat trays fits the bill nicely.
Chris Wolfgang
Sides are all made in-house, with clear attention to detail. Deviled eggs taste like your grandmother's backyard picnic, and the barbecue beans have the kind of flavor that only hours of simmering can produce. The macaroni and cheese is kicked up with bits of dried onion, and the okra is fried to order and served up a perfect golden brown.

Inside, Big Al's has the quintessential barbecue decor: red walls, wood tables and lots of memorabilia on the walls, including photos of Big Al, his family and the patrons who have kept the lights on for almost 50 years. Since taking over for her father, Weiner has put in a lot of work behind the scenes, improving recordkeeping and ordering while still trying to keep the restaurant much the way her father ran it. That means having enough food to accommodate everyone who comes in, open to close.

"Being a business owner is not what I expected," Weiner said.

Big Al's may not be an Instagram-worthy destination like the newer generation of barbecue big names, but Weiner gladly holds her food up next to anyone's. And coming out of the pandemic, Weiner tells us that Big Al's had its best year ever in sales. So, yeah, the hard work of running a restaurant can be a grind, but for Weiner, there's a payoff in turning out barbecue that she and her staff are proud of.

"I think our food is as good as it's ever been, and knock on wood, we're still here every day," she said.

Big Al's Smokehouse BBQ, 3317 Inwood Road. Monday – Saturday, 10:30 a.m. – 8 p.m.; closed Sunday.
KEEP THE DALLAS OBSERVER FREE... Since we started the Dallas Observer, it has been defined as the free, independent voice of Dallas, and we'd like to keep it that way. With local media under siege, it's more important than ever for us to rally support behind funding our local journalism. You can help by participating in our "I Support" program, allowing us to keep offering readers access to our incisive coverage of local news, food and culture with no paywalls.
Make a one-time donation today for as little as $1.