Trompo's Bishop Arts location is set to open around the middle of September. Luis Olvera
For a while now, District 6 in Dallas has been home to some of the best tacos. Specifically, that’s right down to West Dallas.

Part of that adoration goes to Trompo, a taqueria sitting on Singleton Boulevard that Bon Appetit named a best new restaurant in 2016.

Today, Trompo owner Luis Olvera is looking a bit south, back to where his business first began.

“I’m from Oak Cliff, and before I did open the location in West Dallas, I was doing it in my backyard for two years, and that’s how the Oak Cliff Trompo was born,” he says.

And that’s where it’s returning when he hopes to open the Bishop Arts location around Sept. 15.

The new taco stand sits in what was once ChildCareGroups’ North Oak Cliff location — relevant because an early childhood facility involves an interesting design for multiple businesses.

“My layout is, you come to the window, you order, pick up and pay at the window, and the seating areas are all common space for Black Swan Yoga, myself and the other tenants that are there; you can take it to go or hang out in the green space my landlord is working on,” he says.

This past Thursday, Olvera hosted friends, family and media to take a look at the space. The building has been painted a lovely bright white, and a mural welcomes visitors toward the taco stand.

While the GPS for the address takes you to the front, you’ll want to enter (by foot) off of South Bishop Avenue. Or, do like we did and make new friends asking where Trompo is. A preview event for a popular spot meant food ran out quickly, but one reveal included a trompo burger slider ($4.50 at the new spot). 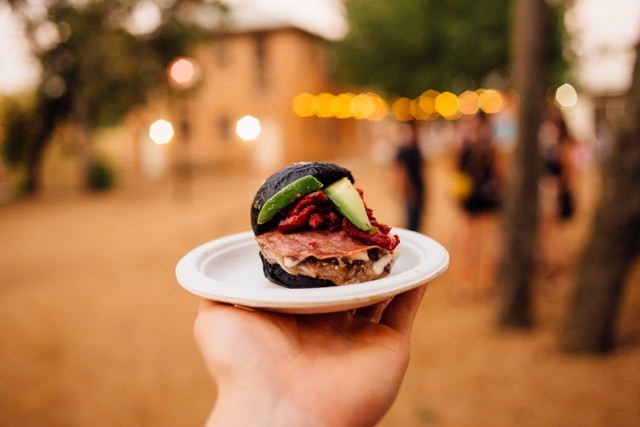 New to the Trompo menu at the Bishop Arts location: a trompo slider.
Nathanael Gassett
On this you’ll get carne de res, trompo, salami, mozzarella and aguacate — a welcome change-up from the tacos so many people already love.

The rest of the menu has what you expect: tacos, quesadillas and elotes, the latter of which was available at the recent preview. Now, I’m a fan of elotes generally, but the pulverized Taki chips on this one make it particularly memorable.

One difference on the Bishop Arts’ menu is the tacos mañaneros.

You can experience this for yourself (he’ll do a variety) from 10 a.m. to noon Saturday and Sunday each week — and that’s the only thing on the menu you’ll find at that time.

“It keeps all of my guisos fresh,” Olvera says. “Brunch is, typically, a restaurant has leftover food and they make it work for brunch ... My way was, no, let’s do some fresh guisos that we can rock, and hopefully everybody will enjoy them.”

As Trompo (Bishop Arts) is set to open around the middle of the month, Don Julio will come to the space for the event from noon to 6 p.m. Sept. 16. Celebrating Mexican Independence Day, they’ll join Olvera for a taco giveaway while Mexican artist Claudio Limon paints a custom mural. The blue and orange work will depict the restaurant owner’s story in being named one of the best taco spots in the country.

Expanding to North Oak Cliff has been a long time coming for Olvera, who was originally supposed to open Trompo’s first storefront in the area, but when that fell through, the business moved to Singleton. He kept trying for a location in Oak Cliff, but it seemed more and more opportunities slipped away from him.

As the last deal fell apart, his real estate agent connected him with developer Michael Nazrian, who was working on the former childhood center building.

“All the stars aligned, and that leads up to today,” Olvera says. “We’re not yet green-tagged but we’re almost there.”

While Oak Cliff is home for the restaurateur, Bishop Arts is different from West Dallas.

“Most people, especially those of us that were there before Bishop Arts was a thing, have seen it swallow up some small businesses ... it’s a loaded question,” he says. “We kind of have the idea that Bishop Arts isn’t about lunchtime during the week, so that’s going to be very interesting because I have been very fortunate — everybody from across the river comes to eat at Singleton, so I have no idea what to expect. I would like to think that my landlord partnered with me to kind of satiate a need that we have in the area, which is to have an affordable space to do lunch.”

Trompo sits in the part of Bishop Arts where traffic is a little more accessible parking-wise as buildings expand but not all tenants have filled in yet. In an area where tacos can creep up around $3, Olvera is aiming to stay focused on what he intended when he started supplying tacos at backyard events.

“I did the smallest increase that I could. ... Just because I moved to Bishop doesn’t mean I need to charge a fortune for it,” he says. “My tacos are not cheap, they’re also not the most expensive. I love the fact that Mexican cuisine is starting to get the right light under it; I respect that. My business model at the end of the day is that I’m a street taco vendor. It’s got to stay street for me.”

Trompo, 407 W. 10th St., Dallas (Bishop Arts). To get Trompo's tacos before the North Oak Cliff location opens, go to 839 Singleton Blvd., Suite 150 (West Dallas).
KEEP THE DALLAS OBSERVER FREE... Since we started the Dallas Observer, it has been defined as the free, independent voice of Dallas, and we'd like to keep it that way. With local media under siege, it's more important than ever for us to rally support behind funding our local journalism. You can help by participating in our "I Support" program, allowing us to keep offering readers access to our incisive coverage of local news, food and culture with no paywalls.
Make a one-time donation today for as little as $1.