What Makes a Hidden Gem? We Hit the Road to Find Out

Who doesn't like meat on a stick? Pork belly (left), beef (middle) and lamb (right). Hank Vaughn
Guiqiao Chen will never forget the day in 2010 when she was working inside her small food truck in New York City and a tornado hit. Things didn’t go well.

“In that moment, it’s very windy, the food truck rolls over, I’m stuck below, I can’t move,” Chen recalls. A lot of people, some of whom were customers, rushed over to help her. They got her out from under the truck. They saved her life. “I always remember that,” Chen says.

Since then, Chen moved to North Texas and has opened two locations of Fat Ni BBQ – brick-and-mortar – where she serves street food from her native China, including house-made noodles and succulent skewers of grilled meats and vegetables.

When she was starting her new life in Texas, "sweet customers," as she calls them, came to her aid in different ways. They helped her acclimate to her new city, meet new friends and find a church.

At Fat Ni BBQ, guests can watch sticks of meat cook over hot coals on an open grill just behind a window in the kitchen. Fat sizzles over flames, and whiffs of smoke float over the glass.

This could be dangerous information, but Fat Ni is open until 2 a.m. every night of the week, except Tuesday. If you’re inclined to late-night munchies, you may find yourself dreaming of the $3 skewers. Do you really need three sticks of grilled lamb at midnight? Of course you do.

Chen is a self-taught cook who says she dreams of Fat Ni BBQ being famous one day. It might not be famous yet, but the restaurant is certainly a gem, a happy discovery almost as satisfying and fulfilling as the food itself.

Who doesn’t like a little hidden-away restaurant, perhaps off the beaten path and often fulfilling an otherwise underrepresented food niche? A spot that shines a light on the owner's unique personality, offering an experience infused with culture, and of course, amazing food.

Dallas, like many modern cities, is replete with sterile cookie-cutter strip malls, seemingly thousands of Starbucks and Subways. The sameness can be daunting and at times soul-crushing. We’ve pulled together a dozen or so hidden gems, like Fat Ni BBQ, that can restore one's faith in a way that the latest offering from Arby's simply cannot. The Lao sausages at Ly Food Market are hidden gems.
Hank Vaughn
Usually, hidden gems end up being family affairs, where the extended family pitches in and works the counter and grill, which is perhaps one of the reasons such places survive years, if not decades.

The Southammavong family is one such example. They own and operate Ly Food Market, a Lao restaurant and grocery store in southwest Dallas. Philip, one of the older sons, often works the counter. His mother, Ly, along with his father, Kam, started the location as a simple grocery store, but after customers repeatedly asked his mom how to prepare a given dish, she started hosting cooking demonstrations using a camping stove at the back of the store.

Eventually, word of mouth created such a demand for her cooking demos that the family built a small kitchen, and then an even larger kitchen. Now, the restaurant is the main focus of what was once just a grocery store, and Philip’s younger brothers also pitch in, as does their grandmother on occasion. At one point Philip went to college, but in the end he came back to the family business. He’s invested in its success. 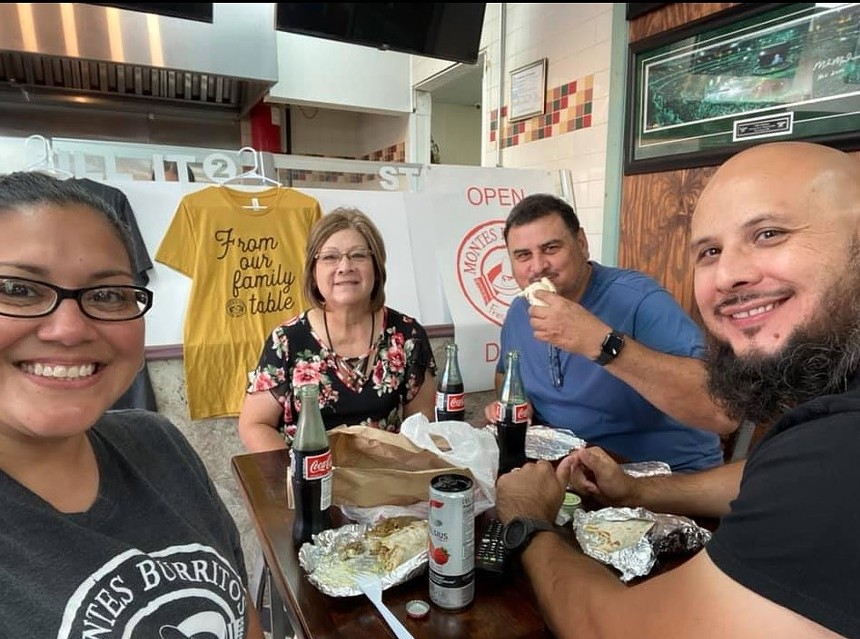 Rachel and Aaron Montes sit down with original founders (and parents) Armando & Paula Montes.
Courtesy of Montes Burritos
Similarly, Montes Burrito is set inside a Shell gas station in North Dallas. Originally, Armando Montes started this concept as a Mexican restaurant in Hillsboro and expanded to six locations. A couple of years ago, his son, Aaron, and daughter-in-law, Rachel, decided to open their own locations where they’d focus just on burritos.

There aren’t enough family members to fill out all these locations, but some of Aaron and Rachel’s children will help out at the burrito spot, manning the counter or running deliveries. And although the burrito spot is its own thing, sometimes Armando will stop by.

“Yeah, he'll come in and check on it. He was here last month. Like quality control. He makes sure the recipes are on track,” Aaron Montes says.

A common trait at many of these small, under-the-radar restaurants is a sense of family that extends to customers. We were enjoying a hamburger at one of these hidden gems, Crown Grocery and Deli in Oak Cliff, when a customer walked in. Owner Ibrahim Dalgamouni immediately lit up and called him by name. He asked where he’d been and mentioned that he hadn’t seen him in a long time. They chatted for 15 minutes before the customer finally picked up his to-go order.

Just be ready to occasionally wait for your food to be prepared at these gems. This isn’t a McDonald’s drive-thru, after all; good things take time. People seem content to wait patiently for their food, and the quick camaraderie that develops among the patrons only adds to the charm.

Our most recent visit to Big Daddy Convenience Store was no exception, as the aisles of the grocery store filled with people awaiting their baskets of fried chicken.

"I'm at Big Daddy's. Big Daddy's! You've never heard of Big Daddy's?" a customer asked incredulously into his mobile phone. Suddenly, we all were members of a secret fraternity of good eats, and woe to anyone who didn't get that.

We've gathered a small sampling of places that one would be wise to try out while they remain relatively hidden. After all, Jimmy’s Food Store was at one time considered a hidden gem, but have you tried to find parking there lately?

Find Dallas' essential hidden gems here.
KEEP THE DALLAS OBSERVER FREE... Since we started the Dallas Observer, it has been defined as the free, independent voice of Dallas, and we'd like to keep it that way. With local media under siege, it's more important than ever for us to rally support behind funding our local journalism. You can help by participating in our "I Support" program, allowing us to keep offering readers access to our incisive coverage of local news, food and culture with no paywalls.
Make a one-time donation today for as little as $1.