Christi Erpillo (left) and Johnna McKee Paige Weaver
Sisters Christi Erpillo and Johnna McKee of Winter Family Concessions are the team behind two of this year’s biggest dishes at the State Fair of Texas: Fernie’s Hoppin’ John Cake with Jackpot Sauce, this year's Best Tasting – Savory winner in the Big Tex Choice Awards, and Fernie’s Orange You Glad We Fried It?, a finalist.

Winter Family Concessions has been a mainstay at the fair for 48 years.

“It all started with Mother and Daddy just trying to get some cash to go to Las Vegas, and here we are, almost 50 years later,” McKee says. Now they have five stands, including their indoor outpost called the Dock, located in the Embarcadero building.

The Winter family has a history in the restaurant business. Erpillo and McKee’s grandparents owned a café and a soda fountain in Dallas.

“In the early days, we didn’t realize what a legacy this was going to be," McKee says. "We just thought we were out here selling nachos for extra, fun money. But when Mother and Daddy brought funnel cakes in, around 1980, and then with the Big Tex Choice Awards, now we’re realizing we are really something out here." 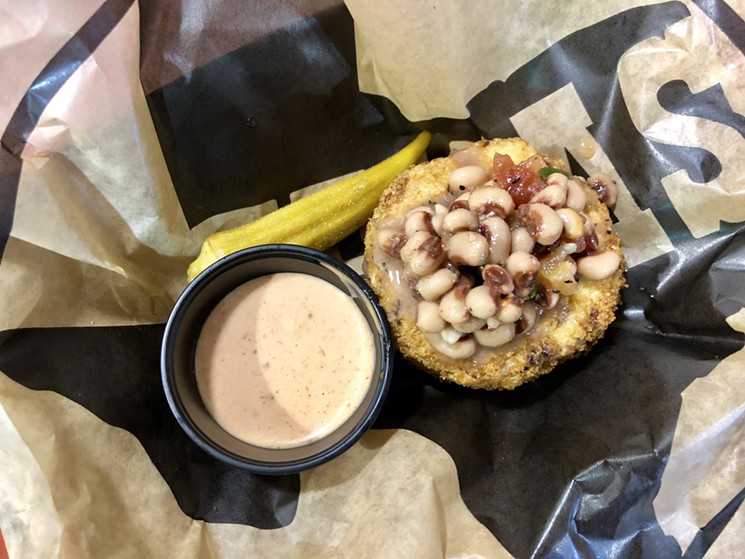 Fernie’s Hoppin’ John Cake with Jackpot Sauce, this year's Best Tasting – Savory winner in the Big Tex Choice Awards.
Paige Weaver
Their mother, Fernie, is 92 and still regularly comes to the fair to supervise the operation and greet guests.

“She’s a little legend out here," McKee says. "She watches everything. ... If food isn’t going out right, she’s sitting right here, telling us."

They take pride in their food.

“We’re not going to be one of those one-hit wonders," McKee says. "Our menu still has nachos. We still have the roast beef sandwich, red beans and cornbread. We’ve had the fried grilled cheese sandwich on the menu for 10 years."

Erpillo is the creative brains behind recipe development.

There's still one more week for the fair, but the sisters are already thinking about next year’s Big Tex Choice Award entries.

The Orange You Glad We Fried It?, an empanada-like pastry filled with chiffon orange cake, whipped cream and orange preserves.
Paige Weaver
In creating new dishes, they try to remain true to what their parents established, while also staying relevant. The sisters have created an effective working partnership over the years.

“We call each other the CFOs. She’s the chief frying officer, and I’m the chief financial officer,” McKee says. Their other sister, Joanne Czerwinski, does a lot of the bookkeeping work, as well.

It really is a family business. McKee went into labor 31 years ago while making funnel cakes. Her son now runs two of their outdoor stands. Her daughter is a hair stylist full time but helps out Wednesday through Sunday. McKee’s grandson named their Orange You Glad We Fried It? dish.

Additionally, they have 85 employees this year.

“We try and hire from around the community as much as we can,” McKee says.

Erpillo also established State Fair Cares, a program that donates food to homeless shelters, food pantries and churches after the fair is over.

“We got all the other concessionaires to donate their leftover food," Erpillo says. "The day after the fair, we have all these 18-wheelers come up and all the concessionaires come up on their golf carts, just giving food away. It really makes a difference.

“This is our heart and soul. For 24 days, 300 hours, we say ‘you can do it.’ That’s really the hard grit of it. We’re totally, 100 percent female-owned and operated. We’re showing the boys out here a thing or two,” says Erpillo. “There is a big boys club out here. You don’t have to be a man out here in this industry to make it. I think we’re doing OK,” adds McKee.

The State Fair of Texas runs through Oct. 22.
KEEP THE DALLAS OBSERVER FREE... Since we started the Dallas Observer, it has been defined as the free, independent voice of Dallas, and we'd like to keep it that way. With local media under siege, it's more important than ever for us to rally support behind funding our local journalism. You can help by participating in our "I Support" program, allowing us to keep offering readers access to our incisive coverage of local news, food and culture with no paywalls.
Make a one-time donation today for as little as $1.
Paige Weaver
Contact: Paige Weaver