Zoli's Pizza Is Reborn in Addison, in All Its Topping-Stacked, Grease-Free Glory 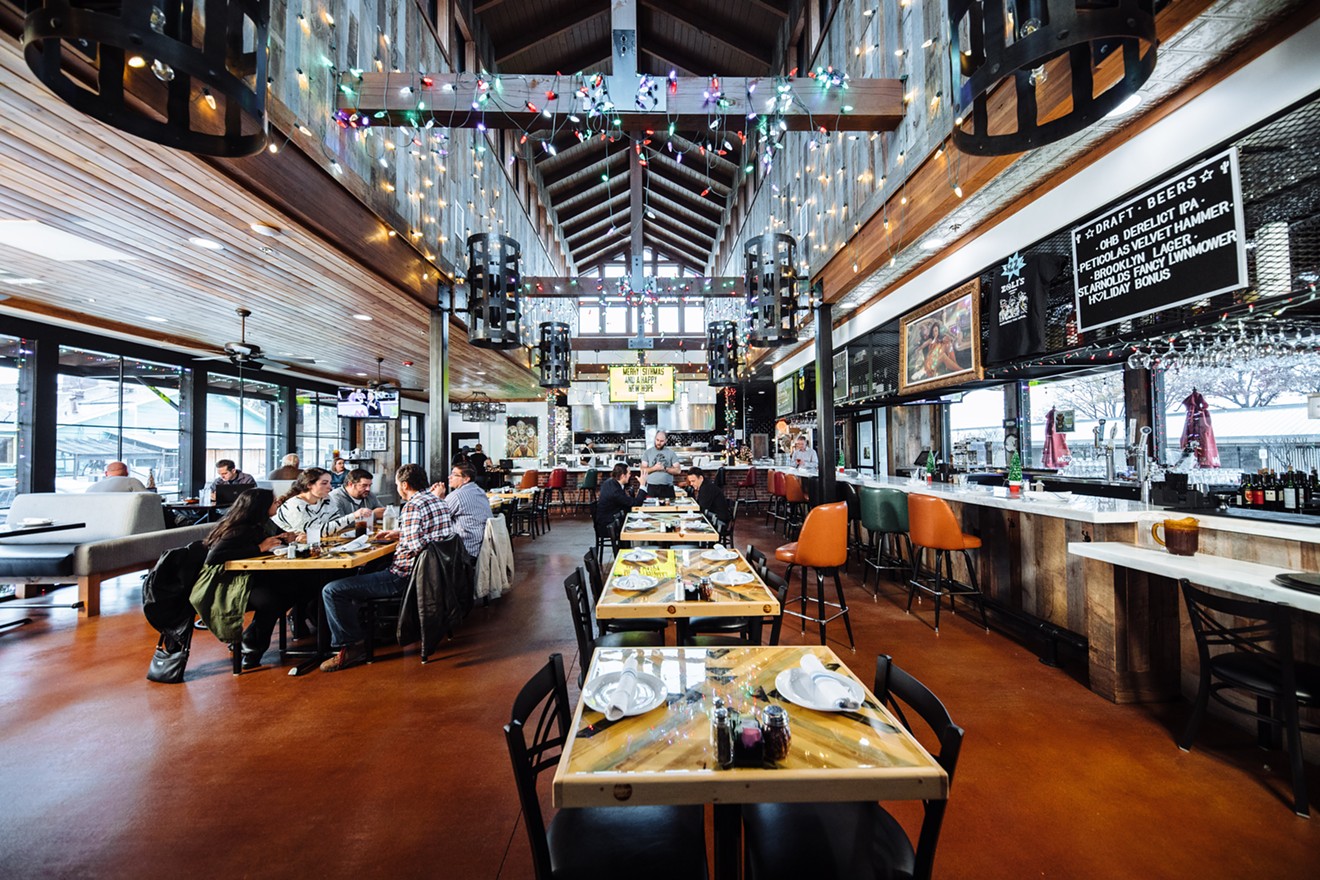 Kathy Tran
The pizza-making at Zoli’s is righteous. Hold up a slice of the thin-crust round pie. Notice how the crust is crisp  all the way through to the center. No matter how many toppings Zoli’s loads onto its pizzas, the middle never gets soggy or goes limp. Toppings don’t slide off. No matter how fatty the ingredients are, the slice will not shine with grease. Few things are as satisfying as the little flash of euphoria at breakfast the day after a pizza run, pulling leftover Zoli’s out of the box and noticing that the remaining slices didn’t leave behind grease stains.

Zoli's pizza master Lee Hunzinger has been making pizzas since he was a teenager.
Kathy Tran
That’s a testament to the hard work and diligence of Zoli’s pizza master Lee Hunzinger, a New York native who started making pizzas as a teenager in his parents’ restaurant more than 30 years ago. He’s been with the restaurant since its original life as a small, snarky, by-the-slice joint in Oak Cliff renowned for its wild inventions, like meat wreaths, a caloric Christmas catering tradition. That location, given the boot by money-hungry developers, is now reborn in Addison in a blaze of deep-fried, marinara-slathered glory.

As much as Zoli’s projects a sassy, saucy attitude, Hunzinger takes his vocation extremely seriously. Yes, it’s funny to sit under a massive painting of the Last Supper with Star Wars characters instead of apostles, all of them eating pizza instead of breaking bread, and yes, the menu descriptions are lighthearted. (“All pastas served in a bowl as big as your face.”) But without Hunzinger and his crew turning out great food, the Zoli’s attitude would be a gimmick.

Choosing a favorite Zoli’s pizza is a little bit like taking a personality test. I’m especially fond of the Lil’ Troy ($15 round, $17 square pie), with spicy, craggy meatballs, thin racing stripes of cherry pepper, vodka sauce and a generous blizzard of breadcrumbs that toast up nicely in the blazing-hot oven. (Another sign that Zoli’s does things right: The sauce and cheese, by some miracle, don’t get the breadcrumbs soggy.)

A now-infamous Zoli's painting shows Star Wars characters feasting on pizza for the Last Supper.
Kathy Tran
If the Cattleack BBQ brisket pizza special is on offer, get it. It’s a hot firecracker of a pie, with jalapeño peppers dancing around the clumps of brisket, which look like pulled beef and still taste of smoke. And the crust is even better than Zoli’s usual because it’s dusted with sesame seeds. Why don’t more pizza joints put sesame on the crust? Why doesn’t everyone?

On the other hand, maybe my favorite is the chicken bacon ranch pizza ($16), on which Zoli’s balances chicken, pickled jalapeños, a dusting of parsley, a spiral of ranch dressing and pieces of bacon so huge that some of them are better described as pork belly slabs. The ingredients play perfectly together: a tug of sweet, a stab of spice, the fragrance of parsley, a bomb of fatty pork. And the crust, coated in sesame, caraway and poppy seeds, is another reminder that not enough pizza places are thinking creatively about topping the edges of their pies.

Zoli's Christian Pescroni ($17, or $15 for the round version) is generously laden with thick-cut pepperoni and jalapeño pesto.
Kathy Tran
Another specialty at Zoli’s — maybe a surprising one — is square pizzas with thicker crusts and slightly burnt edges. When I was a kid, our local pizzeria called this Sicilian style, and some of my first food memories involve cheese crisping up into bubbly brown points along the edge of a Sicilian pan. At Zoli’s, we sampled the Sicilian lineup via the Christian Pescroni ($17, or $15 for the round version), loaded with an excess of the kitchen’s superb thick-cut pepperoni. This isn’t the kind of amateur pepperoni that slides off and leaves a yawning tomato-sauce hole. It’s pepperoni for grown-ups. But I wish the jalapeño pesto brought a little more consistent heat, and Sicilian pizzas are, because of their thicker dough, not nearly as good the next day as their round-crust brethren.

Into every life a few vegetables must fall. Luckily, the salads here are terrific: generously loaded with ingredients but dressed with restraint. Whether we ordered the “big” salad with mozzarella, cucumbers and Italian dressing (small $5, large $9) or the chopped salad that adds salami and red peppers to the mix (small $6, large $11), the salad always compelled second helpings. Zoli’s uses darn good mixes of greens and knows just how much dressing is enough without going overboard.

It doesn't overthink the appetizers, either. It knows just what we want. Mozzarella sticks? Yes, but in ball form, with the kind of softness that frozen sticks with bad cheese will never have ($9). The zucchini fries ($9) are perfectly tender, crisply breaded and oh-so-unhealthy.

The CBR pizza is topped with mozzarella, roasted chicken, bacon, pickled jalapeños, parsley and jalapeño ranch on an everything-bagel crust.
Kathy Tran
In a bowl of pasta carbonara — the sinfully rich preparation featuring bacon and an outrageous amount of cheese and pecorino — my favorite element is the breadcrumbs that give this pasta a little crunch and contrast ($12). There are sandwiches, too, most notably the Big Shirley ($14), which contains just about every Italian deli meat, cheese and veggie stuffed into a long sesame roll. The sesame seed flavor comes through, and the meats are bold, too, which helps offset the unexpected difficulty of eating a sandwich in which all the fillings have been turned sideways.

The Big Shirley ($14) is packed with Italian deli meat, cheese and vegetables on a sesame roll.
Kathy Tran
Zoli’s sells desserts, but neither I nor any of my dining companions ever had room left in our bellies to try one.

It feels almost silly to be reviewing a pizza place this beloved, this celebrated and this willing to poke fun at itself. But there is still subtle room for improvement — in more consistently hitting al dente on the pastas or adjusting spiciness levels on some of the pizzas. The Cattleack brisket, for instance, fights against a mighty onslaught of hot peppers.

But reviewing Zoli’s is also sensible because not everyone in Addison knows and loves this place the way Oak Cliff does. I hope the good people of Addison like meat and have elastic waistbands in their pants.