Get Hitched for Free at BrainDead Brewing on Valentine's Day 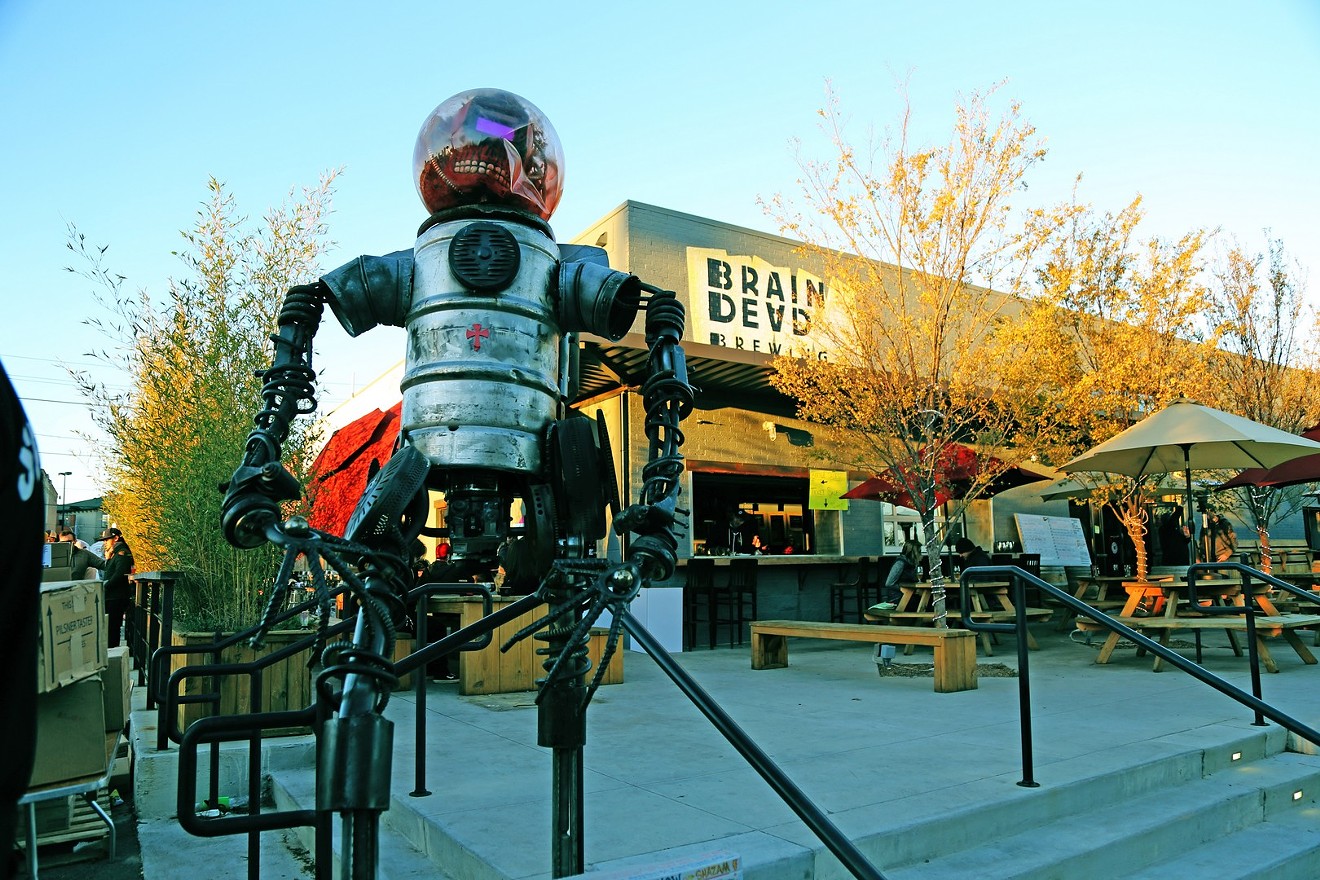 This statue outside of BrainDead Brewing could be the official witness for your wedding. Roderick Pullum
Weddings can be stressful, money-sucking pains in the ass, but Deep Ellum's BrainDead Brewing has a solution. If you and your future spouse are willing to go without some of the usual luxuries associated with weddings, you can get legally married at the Main Street brewpub between noon and 10 p.m. on Valentine's Day.

BrainDead's event coordinator, Keven White, will officiate. He became a legally ordained minister in the Universal Life Church on a whim when he was a teenager. "This will be the first time I'll put it to use," White says.

Each couple that takes up the brewpub's offer will also receive some free swag, including two beers, a bottle of the BrainDead Brewing beer of choice and a special batch of wedding cupcakes prepared by executive chef David Peña.

Couples can register with White and BrainDead Brewing by emailing the brewpub at [email protected] with the phrase "MARRY ME" in the subject line and the time on Valentine's Day when they'd like to get married. All couples must obtain marriage licenses before White performs their wedding ceremonies.

"I have a basic script, but I'm willing to tailor that to whatever they want." — Keven White

"I have a basic script, but I'm willing to tailor that to whatever they want," White says. "It can be as easy as 'we are gathered here, say your vows, kiss each other' and boom, we're done in five minutes. We can have them walk through the restaurant as they walk down the aisle. The idea is for it to be a very casual approach to a wedding, but we're willing to work with whatever requests they want."

White says the idea for the Valentine's Day event came from watching a friend endure the hell of preparing for a traditional wedding.

"One of my buddies got married a few months ago, and he was talking about how expensive and stressful of a process it was for both the bride and the groom with six months of planning," White says. "It struck me one day: Wouldn't it be cool if you could just offer something that's just a step above going to the county clerk? Someplace where you can still get married but still make it ... inexpensive?"

White announced the offer to marry couples at BrainDead Brewing on Facebook last Thursday. The response was positive, but he's still waiting for couples who are willing to take the plunge.

"We have had quite a few people talk to us and say, 'Hey, it's super short notice, so I can't do it, but I appreciate what you guys are doing and it's a cool idea,'" White says. "So the response has been very warm so far."

White says he hopes couples will take him up on the offer because he's excited about marrying them.

"The idea of being able to usher two people who love each other into the next stage of their lives is an honor and a privilege," White says. "I wouldn't be surprised if a pastor said they weren't a little nervous before they did it, but I'm more than excited to do this."