DJ Willie Trimmer teamed up with a former Dallasite living in Belize to throw a music festival that benefits a good cause. Roderick Pullum
Veteran Dallas DJ and promoter Willie Trimmer has served as an ambassador for the Dallas house and techno scenes for nearly two decades. Through his promotion company 12InchPimps, he’s organized parties, managed DJs and held down several residencies himself. Now he’s leveraging his experience and connections to start the four-day Festival of the Sun & Moon in San Pedro, Belize.

Andy Caldwell, DJ Dan and Hatiras will headline the 20-artist lineup at the inaugural festival, taking place April 6-9. The U.S., Canada, England, Germany and host country Belize will all be represented, and Texas alone will have 6 artists on the lineup: Andy Austin, Girlbot, Nate Nelson, Stetra, DJ Dilly and Trimmer — all from Dallas — plus Zekk from El Paso.

A portion of the proceeds from Sun & Moon will benefit two nonprofits: the San Pedro Aids Commission and Raise Me Up. The latter is run by a former Dallasite and works to help the poor in San Pedro; the group's latest project is building a shelter for women and children.

We spoke with Willie Trimmer about how the music festival came to be.

When did you visit Belize for the first time?
click to enlarge 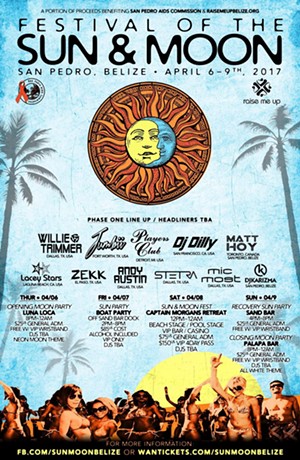 courtesy Sun & Moon
I first visited Belize a year ago for my friend DJ Andy Austin’s birthday and fell in love with the island town of San Pedro.

What other connections do you have in Belize?
On my first visit we went to a hotel/restaurant there called SandBar and I found out I knew the owner, Brittney O’Daniel, from back in Dallas. She used to run the old Fedora in One Arts Plaza, and Tryst above Gillies back in the day. She runs a non-profit in Belize called Raise Me Up and she was just awarded Person of the Year on the island for her charitable work. The organization has done a ton for the island. They started a food bank, they help teach children to read, now they’re trying to build a shelter for women and children.

How did the concept for the festival come about?
I went back last September for my birthday with a ton of friends and DJ buddies. We did a mini club, yacht and beachside tour. It went over well so she said we should do a festival on the island to help raise money for the shelter. I throw parties all the time so this seemed like a perfect fit; a party for a purpose.

How did you all decide on the name?
As far as the name Sun & Moon, it’s a four-day festival of day parties and night parties so it’s pretty straightforward. On a deeper level, [although] I’m not a religious person, I do appreciate that the sun gives us life and the moon our tides. But instead of praying that this children’s shelter gets built I decided to actually do something about it.

What are you looking forward to the most?
Playing with some of my idols like DJ Dan, Hatiras and Andy Caldwell, along with some of my DJ buddies on the beach — and just the fact that we’re able to help the people here makes it really special. Belize's beaches will host 6 Texas artists, of 20 playing.
By dronepicr, via Wikicommons


KEEP THE DALLAS OBSERVER FREE... Since we started the Dallas Observer, it has been defined as the free, independent voice of Dallas, and we'd like to keep it that way. With local media under siege, it's more important than ever for us to rally support behind funding our local journalism. You can help by participating in our "I Support" program, allowing us to keep offering readers access to our incisive coverage of local news, food and culture with no paywalls.
Make a one-time donation today for as little as $1.
Roderick Pullum
Contact: Roderick Pullum