Bacon, Egg and Dreams: The Best Breakfast Sandwiches in Dallas Meet BOB. He's a breakfast sandwich with sausage, egg and cheese at The Grape on Greenville ($9). The Grape

Some of the best possible sandwiches happen in the morning. When a gently-flipped egg, yolk just intact enough to hold on through the first bite, spills onto the bread horizon beneath butter-simmered ham, you can rest easy knowing that you've got it all figured out.

Nothing matches the happiness of sitting down to a cup of coffee and knocking back a bacon-loaded, yolk-running, soft-breaded breakfast sandwich. Here are our favorites in Dallas. Unmelted American cheese for the win at Bubba's.
Nick Rallo
Bubba’s Cooks Country's biscuit sandwich with bacon
6617 Hillcrest Ave.
If one of New York’s iconic breakfast foods is bacon, egg and cheese on an everything bagel (they do a weird thing with ketchup), then Dallas’ must be the bacon, egg and cheese on a soft, buttery biscuit. It’s the essential combination of Texas guilty pleasure and hangover cure. We own this breakfast sandwich. At Bubba’s, you get one passed through your car window. You don’t even really need to be wearing pants if you're stealthy. A long dash of crisp bacon, a fold of egg and an unmelted slice of American cheese do the trick; the biscuit will melt the cheese for you. This breakfast dream costs less than three bucks. Nick Rallo
Latin Deli's Peruvian pork sandwich
701 Commerce St. and 5844 Abrams Road
Unlike on Dallas streets, fastidious construction is welcome in breakfast sandwiches. There’s nothing worse than a floppy egg jailbreaking the sandwich onto your shirt 20 minutes before a morning meeting. Latin Deli’s construction is savant-like, especially in their delicious Peruvian pork sandwich. The pork is thick-sliced, pan-fried and stacked under a soft-poached egg with a golden yolk. A zap of yellow mustard wakes up the soft bread. Paired with their long, sugar-spiked fries, it’s one of the simplest, best-executed sandwiches in the city. 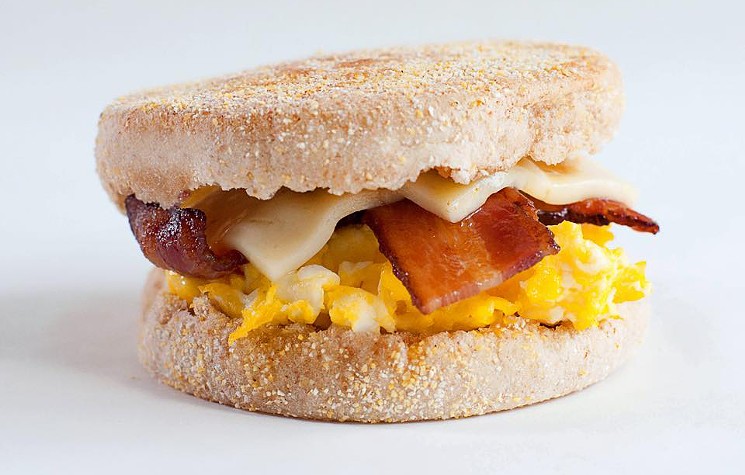 A toasted English muffin surrounds the breakfast sandwich at Start.
Courtesy Start Facebook
Start's bacon, egg and cheddar sandwich
4814 Greenville Ave. and 4023 Lemmon Ave.
If you’re reading this from a Starbucks line, you’re doing it wrong. After all, last year, Starbucks earned an F-grade for using meat produced using antibiotics. Start uses eggs that taste like dewy grass and morning rooster calls; their eggs are from cage-free hens and the bacon is antibiotic- and nitrate-free, too. The bacon comes crisp, and a melted slice of white cheddar adds a stern saltiness to everything. It’s bolder and better than anything that has McMuffin in the name. A sunny-side up egg over scratch gravy.
Jonathon's
Jonathon's chicken and biscuit
1111 N. Beckley Ave.
Any breakfast sandwich list obviously needs a chicken and a biscuit. At Jonathon’s, the chicken is brined in buttermilk that’s hit with Tabasco. It’s deep-fried, the gravy scratch-made. So are the biscuits, which means everything is right with the world for the few minutes you’re eating this sandwich. The sunny-side egg bats this sandwich into the sky. Use any extra biscuit halves you might have as a pillow to nap after breakfast.

next
KEEP THE DALLAS OBSERVER FREE... Since we started the Dallas Observer, it has been defined as the free, independent voice of Dallas, and we'd like to keep it that way. With local media under siege, it's more important than ever for us to rally support behind funding our local journalism. You can help by participating in our "I Support" program, allowing us to keep offering readers access to our incisive coverage of local news, food and culture with no paywalls.
Make a one-time donation today for as little as $1.
Nick Rallo
Contact: Nick Rallo