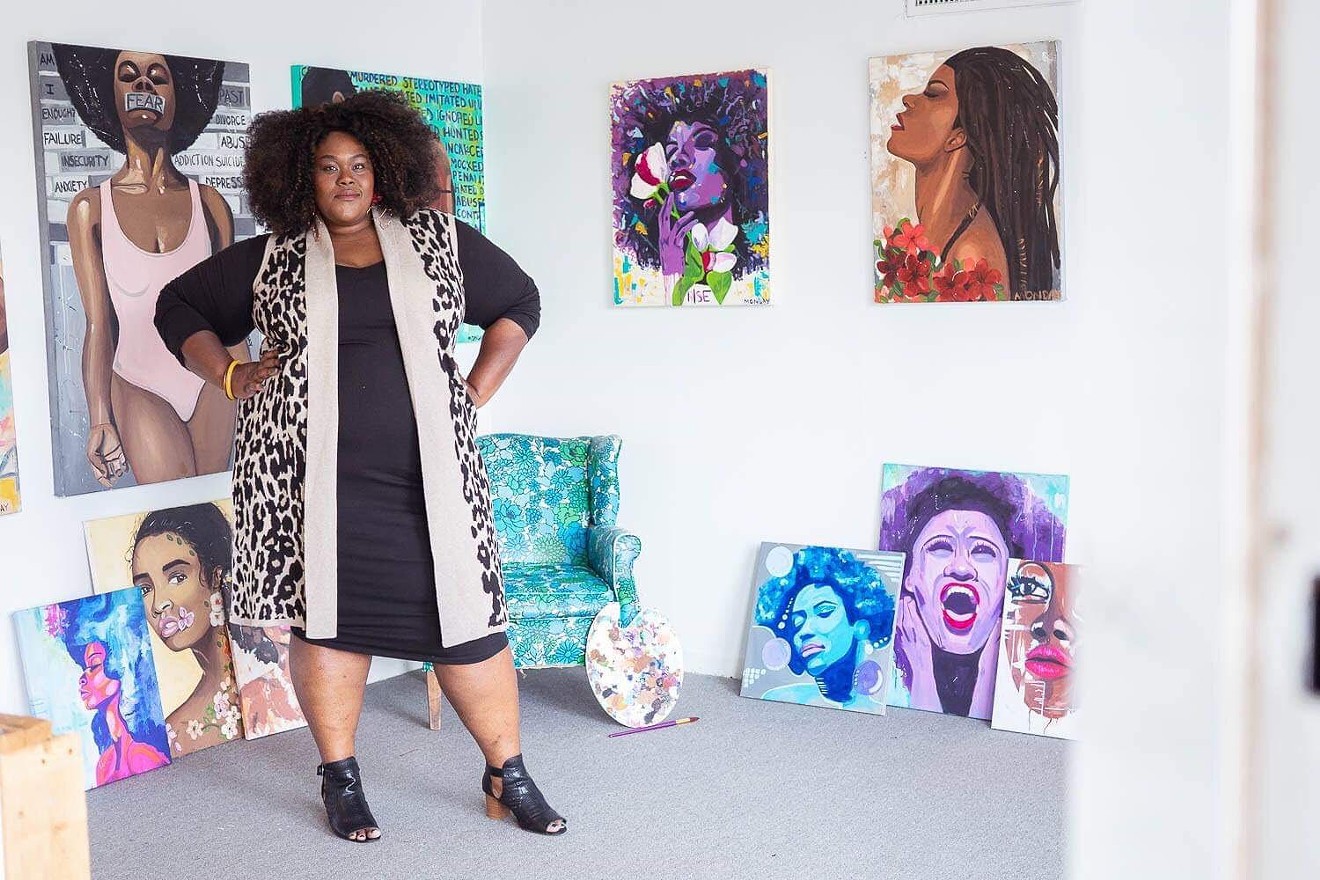 Dallas artist Stacie Monday paints African American women in a striking array of blue, purple and red because that’s how she sees them and that’s how she wants them to see themselves.

“I love to celebrate the different hues that we have,” she says. “When I look at us, I see blues and reds. I see all these different things and I think that’s what makes us beautiful, so that’s what pushes me to experiment with some colors.

“I want to paint a black woman, but I want to paint her purple, and she’ll still know she’s a black woman because her features will be there. It’s a journey of being unapologetically black and of saying it’s OK to embrace who you are, embrace your culture and your community.”

Monday began painting in 2014. At the time, she was a young mother looking for a new purpose.

“I started doing some soul searching,” she says. “I’m a spiritual person, and I felt like God was leading me to be an artist. I really hadn’t dabbled with art too much, so it was just kind of out of left field. I didn’t really know where to start.”

She painted late at night when everyone else was asleep, teaching herself with YouTube tutorials and doing a lot of abstract art.

“I was going off the notion that God wanted me to be an artist, so I assumed I could only paint like Jesus or scriptures,” she remembers with a chuckle.

After a couple of years, Monday felt stuck in the same routine and wanted to branch out, but it wasn’t until she received encouragement from a therapist that she actually found the courage to try.

Her therapist helped her see that making women feel beautiful and uplifting them were positive things.

“That was in 2016, and I feel like she just kind of set me free,” Monday says of those sessions. “Since then I have been creating black art and my goal has been: What is important to me? What is it that I wanted to see growing up? I like to use women who have natural hair, because that’s something that I have and that I didn’t see a lot of.”

Watching her daughter grow up and question her identity were motivation for Monday to create the art that Monday wished she had seen when she was a girl herself.

“She goes through issues," Monday says of her child. "Which is crazy because she’s only 6, but going to school and seeing the other girls, she will sometimes feel like she doesn’t like her hair or she doesn’t like her skin color... She’ll say she wants ‘peach’ skin, so I paint for her because I want her to see that she is beautiful just the way that she is.”


“It’s a journey of being unapologetically black and of saying it’s OK to embrace who you are, embrace your culture and your community.” — Stacie Monday

Developing her style has been a process, but there is one thing Monday's art has always had. “My artwork has always been colorful,” she says. “I love color and experimenting with it, so it has been evolving from that.”

Now Monday has two murals in Dallas, one at the Bath House Cultural Center in Dallas and the other at the Mag & May Apartments in Fort Worth. Her work is also featured in the African American Museum in Fair Park. The feedback she's gotten from her work let her know that she's on the right track.

“I feel like the response I’ve gotten is my confirmation that women do want to feel beautiful and like we’re worthy of being the subject of art,” she says. “A common response is, ‘Wow this person looks like me,’ or ‘I feel represented’ or ‘This makes me feel beautiful.’ It’s a way to make women feel beautiful without being oversexualized, which is something that I think we definitely are.

“It makes you feel like you are worthy enough of being the subject, of being in the art world because you just don’t see it enough. So when you do see it, it makes you feel good about yourself.”

But it hasn’t all been positive.

“Sometimes people will say, ‘Oh I think you’re racist because you only paint black women,’” Monday points out. “I get a lot of that. I guess some people feel left out, but if a white artist only paints white women then nobody says anything.

“People will ask me, ‘Why is that all that you paint?’ Or sometimes when I try to approach galleries they’ll say, ‘Oh so you only paint black women and that’s it?’ Like that’s not a good enough subject. And because of that, that’s why I continue doing it.”

Because of that type of resistance, Monday has begun to see herself as both an artist and an activist.

“I feel like the purpose, the reason I’m doing this is that I’m changing that negative stereotype that I feel black women have — the angry black woman, bitter, all these negative connotations,” she says.

“I like to paint black women in a feminine way, in a celebratory way because I don’t think our femininity is seen that way. I’ve been blessed to meet so many black women who are so soft and so different from what the world sees us as. So for me, I’m trying to show that part.”

Overall she has been pleased with how well her message connects with people. One fan, Q McDonald, said it perfectly in a Facebook review: “Her art reaches my soul and heals it a little, because loving her work helps me love things about myself.”

Monday says that’s a pretty typical response and what she hears during art shows or through social media. Monday has been experimenting with mixed media and going back to dabbling in abstract.

“I’m pairing portraits with abstract, because I’m thinking more about my own personal journey and trying to find myself, my genealogy, my history,” she says.

“It’s definitely a soul search thing that I’m going through, wanting to tell my story more and talk more about things that we go through in our community. Something a little deeper, I would say. I’m exploring what African Americans deal with as far as identity. That’s what my next series is going to be about.”
KEEP THE DALLAS OBSERVER FREE... Since we started the Dallas Observer, it has been defined as the free, independent voice of Dallas, and we'd like to keep it that way. With local media under siege, it's more important than ever for us to rally support behind funding our local journalism. You can help by participating in our "I Support" program, allowing us to keep offering readers access to our incisive coverage of local news, food and culture with no paywalls.
Make a one-time donation today for as little as $1.