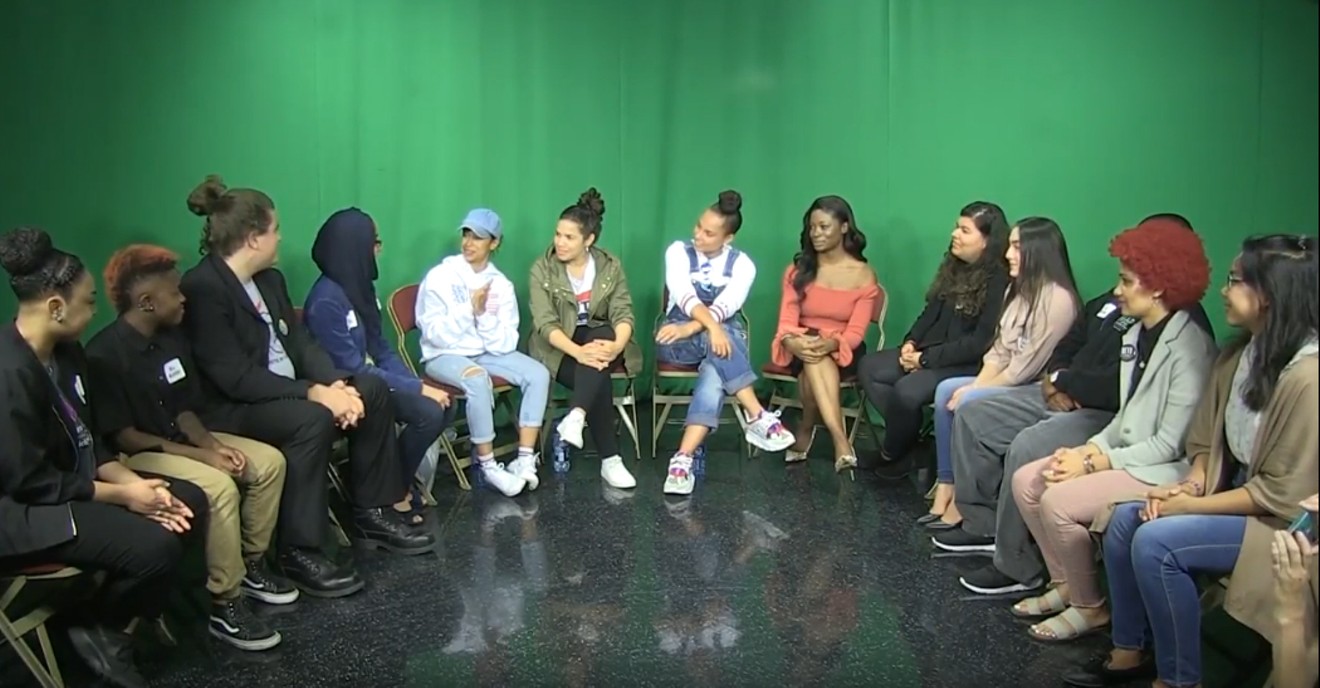 Left to right, Liza Koshy (in cap), America Ferrera and Alicia Keys spoke with student leaders at Richland College on Oct. 23. The three celebrities held a rally on campus to encourage students to vote. Richland ChronicleTV
Actress America Ferrera, singer Alicia Keys and YouTube personality Liza Koshy hosted non-partisan rallies at both Richland College and Skyline High School in Dallas to encourage young people to vote in this year’s midterm elections. And though Kelly Sonnanstine, Student Government Association adviser at Richland College, said the event had been in the works for a while, she just found out last week.

“That was Wednesday at 4 o’clock, last Wednesday,” Sonnanstine says was when the Texas State Board of Education’s Student Voter Initiative called her to say Ferrera was coming to campus. “Thursday they called me at like, 4:45 and they said, ‘Oh yeah, Alicia Keys and Zoe Kravitz are going to come, too.’”

The weekend was hectic for Richland’s SGA and their adviser (as it also was for Kravitz, who was unable to attend the event as planned). By the following Tuesday, all three celebrities, as well as some student leaders, spoke on campus. Sonnanstine says the event went off without a hitch, and she was even able to organize a roundtable discussion featuring the three celebrity guests and student leaders.

“Let me just tell you, those ladies were amazing," Haya Qazi, Richland’s SGA president, says. "They were so gracious. They came in and they each talked about what voting meant for them and what voting meant for us. Frankly speaking, they just wanted us to know that they were grateful for our efforts and they wanted us to encourage the students around us to vote because our voice matters and we should stand up for it.”


“I would love to vote and it kills me to see so many people who don’t vote because they feel like their voices aren’t heard when they vote or it’s not easy for them.” — Haya Qazi

Qazi, a lawful permanent resident who cannot vote, was one of the student leaders who spoke at the rally. Edward Sesay, a recently naturalized citizen and SGA's vice president, also spoke. For having the occasion sprung on them, things went surprisingly smooth, likely because Richland’s SGA had been advocating the vote before the fall semester had even begun.

“Our student government has been working really hard on stuff, and half of our student government, they’re not even citizens, they can’t vote,” Sonnanstine says. “But they just feel like it’s so important for people to be able to vote, especially the ones who can but don’t.”

After the end of spring semester at Richland, Sonnanstine says she met with Qazi as she was heading to vote in May’s primary election. The SGA adviser invited Qazi to join her as she cast her ballot.

“When I got up there, I was like, ‘I don’t care if she watches me and sees which button I push. Do you care?’“

Qazi says seeing how simple the voting process was inspired her to encourage her peers to head to the polls. Over the summer, Richland’s SGA began organizing an event for National Voter Registration Day and coordinated with the League of Women Voters to reach the entire campus. Over a little more than a week, more than 1,000 students were registered to vote on Richland’s campus thanks in part to the SGA.


“I would love to vote and it kills me to see so many people who don’t vote because they feel like their voices aren’t heard when they vote or it’s not easy for them, and I want it to be easy for them,” Qazi said during the discussion. “I want them to feel like they should vote.”

Ferrera plans on visiting more schools across the country, most likely with celebrity friends in tow as was the case in Dallas. It was only in March 2016 when the Sisterhood of the Traveling Pants star spoke to a mostly empty ballroom about the importance of encouraging young Latinos to vote during SXSW. Had that room been as packed as Richland was Tuesday, maybe more Latinos would have voted in 2016. According to the Pew Research Center, fewer than half of Latinos eligible to vote actually did.

“We know the truth about our lives; we know the issues that we live in our lives, and that is what politics is,” Ferrera said. “We have been taught to feel like our lives are somehow this thing outside of what politics is and there’s this big iron door and you only get in there with a law degree and a lot of money, and that’s not the truth. The truth is the air we breathe is political, the water we drink is political, your school tuition is political … our lives are impacted by every single decision that our elected officials are making, but they don’t look like us and they don’t live lives likes us and that’s wrong. That’s just fundamentally wrong.”
KEEP THE DALLAS OBSERVER FREE... Since we started the Dallas Observer, it has been defined as the free, independent voice of Dallas, and we'd like to keep it that way. With local media under siege, it's more important than ever for us to rally support behind funding our local journalism. You can help by participating in our "I Support" program, allowing us to keep offering readers access to our incisive coverage of local news, food and culture with no paywalls.
Make a one-time donation today for as little as $1.