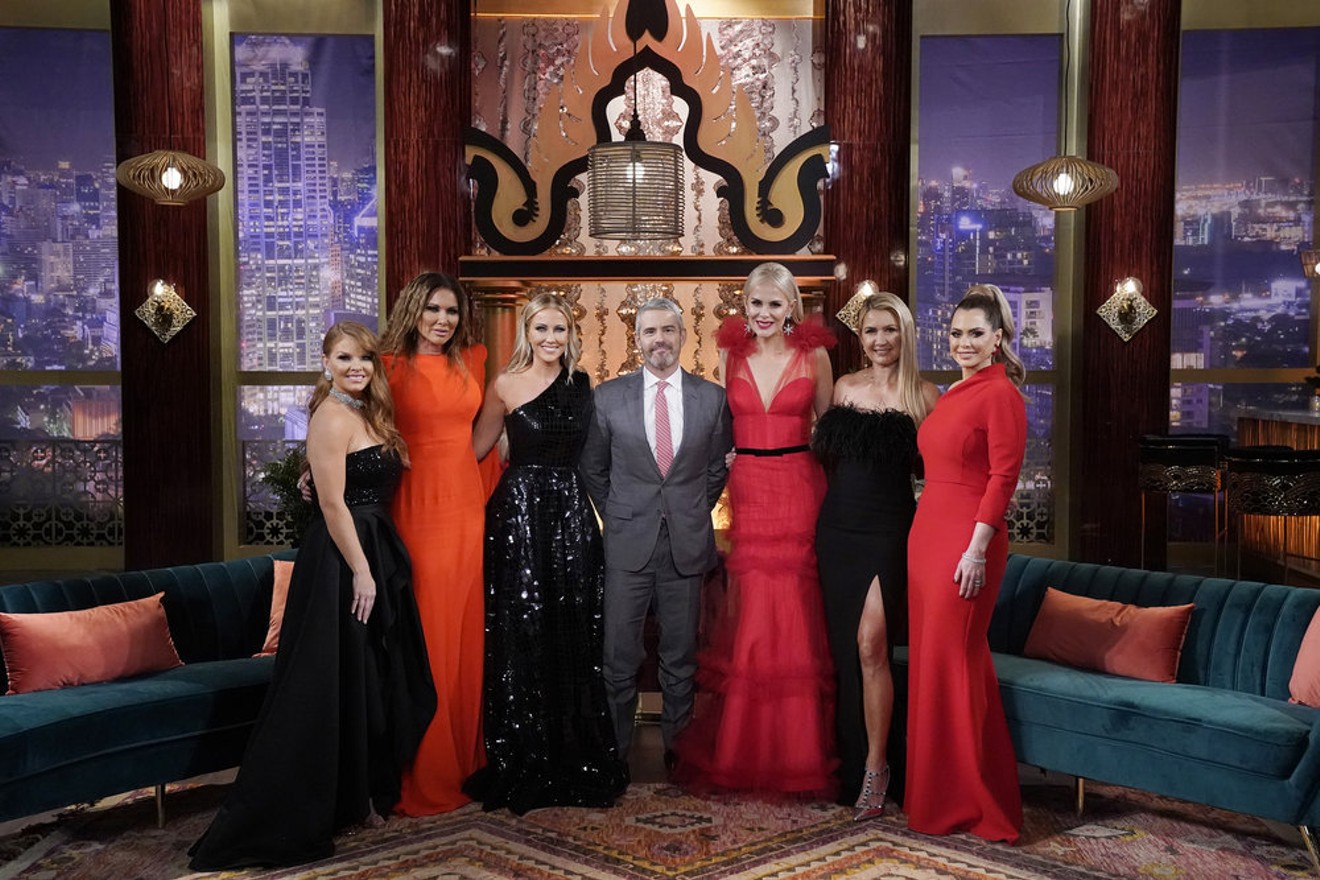 
In a tweet Saturday, Andy Cohen, Real Housewives executive producer, told a fan that the upcoming season of The Real Housewives of Dallas is a "really good season. V excited about it. Surprising."


Considering RHOD is a reality TV show made up of mostly white women who drink Champagne during the day and fight about Dallas society and who and who doesn't belong in it, we can't think of much that would "surprise" us. Throwing wine glasses and cussing one another out and crying because they only have $200 in the bank isn't exactly surprising at this point. Some things would be, however.

They get along the entire time
A surprising season of any Real Housewives show would mean that all the housewives get along perfectly fine and come together for one worthy cause. Imagine this: The housewives realize they've been taken advantage of by Andy Cohen for fame and money and their personal and professional lives have been torn apart, so they all band together and quit the show out of protest. Yes, that would be surprising.

They social distance and wear masks the entire time
It would be surprising if throughout the entirety of the season, we never seen any of the women's mouths because they have masks on the entire time because they care more about their own safety and that of others, instead of looking good on TV. Viewers will be like, "I couldn't tell if that blonde housewife was smiling or frowning because she was wearing a mask and also because she has so much Botox, I can't really read her facial expressions!" And then someone else will be like (most likely in a tweet), "Yeah, they're filming in the middle of a global pandemic that has killed 200,000 Americans and scientists advise people to wear masks to slow the spread of the virus, haha, and yeah, Botox be like that sometimes, haha." Haha, yeah, that would be surprising!

They shut down production because they realize it's not safe
Imagine: Around episode 2, one of the blonde housewives looks at her fellow blonde housewife and says, "Hmm, this is kind of dangerous, no?" And the other housewife says, "Are you saying it is dangerous or it isn't dangerous because when you ended the question with 'no,' it confused me." And then the first housewife yells, "SHUT UP. GET OUT OF MY HOUSE. WE'RE IN THE MIDDLE OF A GLOBAL PANDEMIC. WE SHOULD NOT BE FILMING A REALITY TV SHOW ABOUT WHAT IT'S LIKE TO BE RICH HOUSEWIVES IN DALLAS." And then the production team, camera crew, producers and stars of the show run out of the housewife's home because they realize how silly this all was and the season ends after two episodes. Yes, Andy Cohen, that would be surprising!

They reflect heavily on the BLM movement
This year, the Black Lives Matter movement was in full force with people protesting around the globe demanding cops be held accountable for the killings of Black people. Social media also responded with many people posting a black square in honor of BLM (we think), as companies and people began to take a hard look at how their own white privilege has benefitted them. What would really surprise us if during Season 5 of The Real Housewives of Dallas, the cast, which has not had a Black woman in it since its inception, had an open and honest conversation about their own racist views and how they could do better at being anti-racist. That would surprise us, Andy Cohen, you're right!

There's a murder
Someone ends up dead. And then the dead person's ghost haunts them. Yes, that would be surprising. Until then, we'll expect the same Champagne-fueled celebration of white housewife-ness.

No word yet when season 5 of RHOD will premiere.
KEEP THE DALLAS OBSERVER FREE... Since we started the Dallas Observer, it has been defined as the free, independent voice of Dallas, and we'd like to keep it that way. With local media under siege, it's more important than ever for us to rally support behind funding our local journalism. You can help by participating in our "I Support" program, allowing us to keep offering readers access to our incisive coverage of local news, food and culture with no paywalls.
Make a one-time donation today for as little as $1.