Dallas Artists on the Ways the Pandemic Has Forever Changed Art 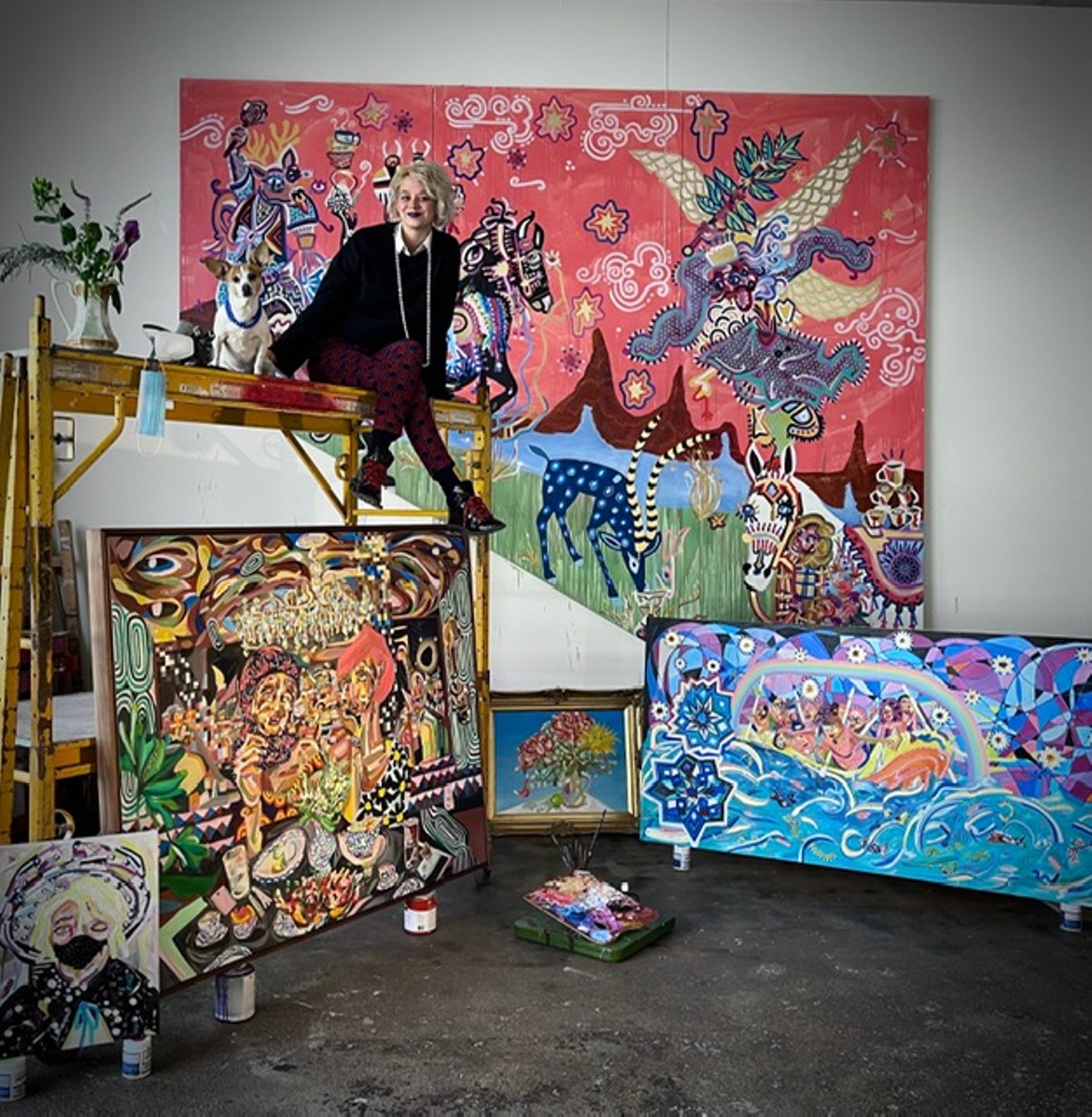 Artist Kelsey Heimerman makes timeless works in her Dallas studio. Joey Brock
Although they have never met, artists Kelsey Heimerman and Dudley Sanders have more in common than they know. At the same time, the two Dallas based painters could not have more contrasting lifestyles: Heimerman lives and paints in a beautiful loft in the hip part of Exposition Park, while Sanders tucks himself away to work in a shed behind a house he owns in Duncanville.

Heimerman’s social media presence is a work of art itself, while Sanders doesn't have an Instagram account. Both artists are successful painters living the life of an artist in the midst of a global pandemic.

In 2020, the two painters experienced a surge of creativity and interest in their works. Sanders has sold paintings to private collectors for as much as $8,000, while Heimerman landed two of the biggest commissions of her career: large-scale murals for Highland Park Presbyterian Church and Avoca Coffee in Fort Worth.

The secret to their individual success is simple: both artists paint everyday.

“The first thing I think of is coming down here and getting to work," Sanders says. "I just get up and go to work seven days a week. Within the last year, I’ve completed maybe 50 or 60 paintings, so my output hasn’t really changed. What I was doing five years ago, I’m still doing today.”

His studio is lined with his oil paintings both wet and dry. Most of them are turned to face the walls when finished. Others remain in various states of completion on a single easel. Sanders’ work is often classified as abstract expressionist and he cites Francis Bacon and Pablo Picasso as some of his favorite artists. He seems almost as prolific as Picasso, judging by the amount of work in his studio, where Sanders sticks to his daily routine as a means to success.

“The trick is to not stop," he says. "You have to have a routine, and that can apply to everything in life. When everything hit, I found myself exploring a lot more mediums. The immediacy of what I am doing has also changed. ”

“A big takeaway is the urgency of life ... Every single second should mean something because death happens literally in a blink of an eye." Dudley Sanders

Heimerman’s commitment to her output mirrors Sanders'. Her loft is sparse with little besides her work and supplies. Wet oil paints and brushes cover the few pieces of furniture she keeps in her space. She takes a long pause to contemplate the question about how the pandemic has affected her work.

“I was already an introverted person working all the time, but with the pandemic I’ve made artwork about wearing masks, both literally and figuratively," Heimerman says. "I want my work to be a conduit of positivity and light. Ultimately, that’s what makes us feel better, even when the world around us seems to be in chaos.”

Heimerman describes her work as “visionary worlds and distorted portraiture.” She's a figurative painter and product of the University of North Texas art department, which rarely produces a figurative artist. She paints her subjects and caricatures ambiguously for a very particular reason.

“I’ve spent a lot of time thinking about it," she says. "I’m a narrative painter, a portrait painter and a white female. I paint ambiguously because of an inherent soul feeling I have to do better, be better and be a stronger representation of people as a whole.”
click to enlarge 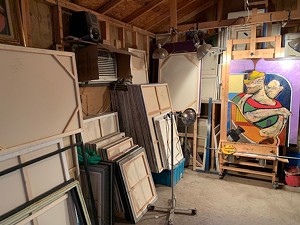 Dudley Sanders' paints every day at his studio in Duncanville.
Scott Tucker

For many people, 2020 saw positivity and light wane. On top of the pandemic, race relations, financial duress and political upheaval ravaged most of the free world. The ever-present reminders of sickness and death were undeniable. For Sanders, the year hit especially hard after he lost his brother to a longtime illness in October.

“A big takeaway is the urgency of life," the painter says of 2020. "Every single second should mean something because death happens literally in a blink of an eye. It has sped up my work and truthfully with my brother passing, painting has become my life. There is a mindset in this world that’s got to change.”

Both artists hope that the slow-down from the pandemic is a lesson in the triviality of competition among artists, as the light at the end of the tunnel could mean a future shining with creative exploration and a friendly playing field.

“The competition between artists is terrible," Sanders says. "We were becoming less of a community every day. Hopefully, the pandemic will teach us to let our guard down, value one another and help each other out.”

Heimerman agrees with this notion and also remarks on the new pace of life that COVID-19 afforded the world in its wake.

“I like how it’s slowing everything down," she says. "Life was just like a carousel that was never going to stop. We now are learning how to just be with ourselves, and that’s a positive thing. It’s realigning people's priorities and with that comes expansion and growth.”

When speaking on the ways art captures a particular time in history, Heimerman and Sanders project their works 100 years into the future and contemplate the immortality of their life’s work.

“That’s what's special about being an artist; the work will outlive them," Sanders says. "Only time will tell, only through hindsight would I be able to say if my work was affected.”

“I want to look back at 2020 and know I worked hard,"  Heimerman adds. "Ultimately, the world gives back what you put into it.”
KEEP THE DALLAS OBSERVER FREE... Since we started the Dallas Observer, it has been defined as the free, independent voice of Dallas, and we'd like to keep it that way. With local media under siege, it's more important than ever for us to rally support behind funding our local journalism. You can help by participating in our "I Support" program, allowing us to keep offering readers access to our incisive coverage of local news, food and culture with no paywalls.
Make a one-time donation today for as little as $1.