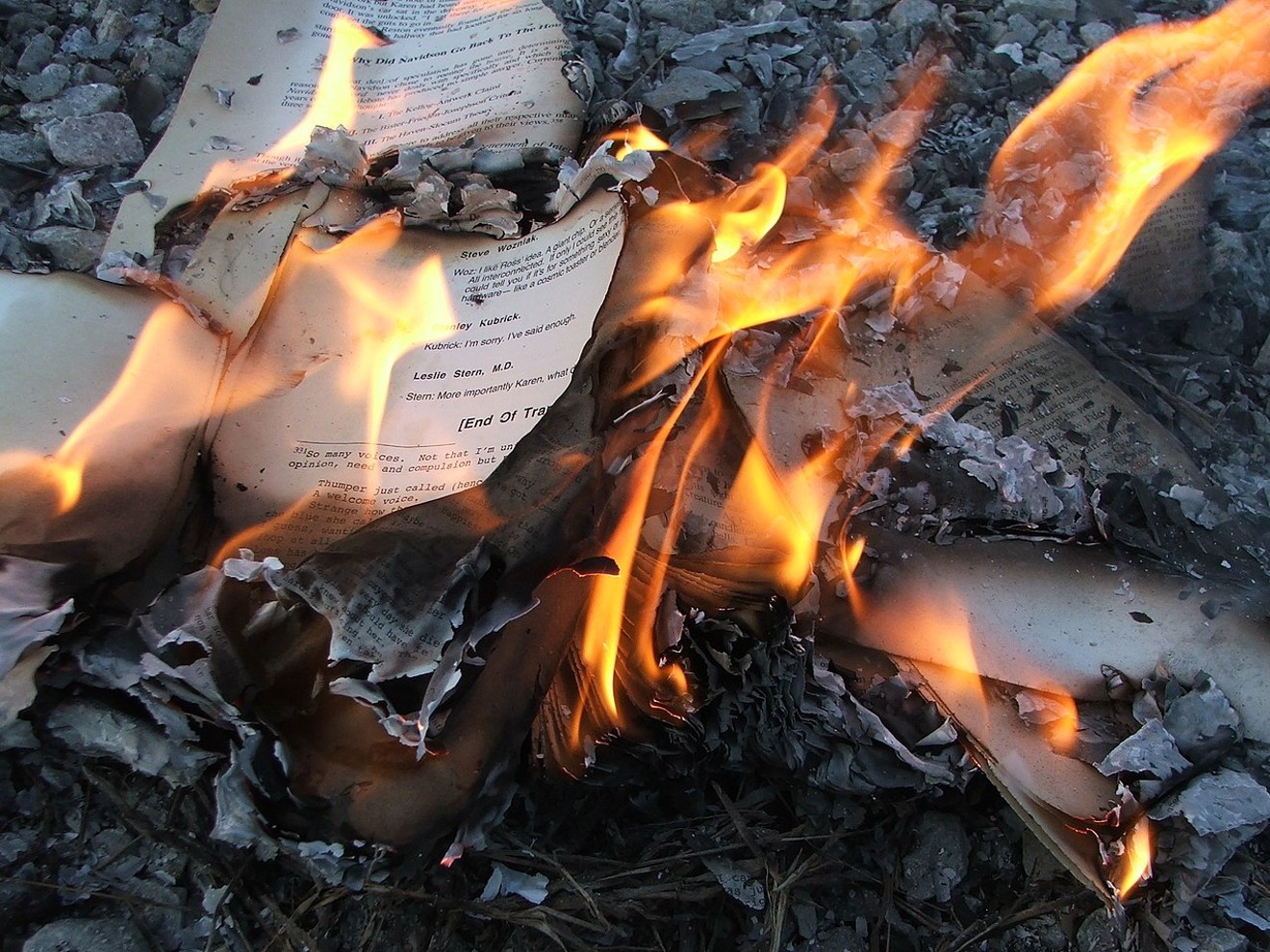 You don't have to use real fire to have a book burning. Wikimedia Commons
Some parts of the world, such as Grapevine and Colleyville, got a huge jump on Banned Books Week by ... well, banning books. They probably don't understand how it works.

Banned Books Week is the time of year when libraries all over the country call attention to and spark discussions about  public and government entities like the North Texas school districts that have tried or succeeded in removing books from shelves.

The Dallas Public Library system is getting a head start on Banned Book Week by highlighting titles that often show up on prudish librarians' and politicians' no-no lists of naughty books. DPL is holding special pub-style trivia challenges about banned literature and holding open discussions on censorship.

Melissa Dease, the communication and youth service administrator for the Dallas Public Library system, says Banned Book Week isn't just about highlighting books that are on banned lists across the country. The public library's "Books Unite Us" campaign aims to educate people on their rights to read what they choose, especially at public libraries.

Some of the special events around Banned Book Week include a trivia contest and open forum on banned literature at 1:30 p.m. on Friday, Sept. 16, at the Kleberg-Rylie Branch Library and at 7 p.m. on Friday, Sept. 23, at the Wild Detectives Bookstore and Coffee Shop. The events are sure to feature books that regularly show up on banned book lists, such as Ray Bradbury's ironic dystopian tale Fahrenheit 451, Maya Angelou's moving I Know Why The Caged Bird Sings and Art Spiegelman's Pulitzer-winning graphic novel about the Holocaust, Maus. A school board in McMinn County, Tennessee, banned the latter last January, which only increased its sales and popularity.

Groups such as the American Civil Liberties Union of Texas created a special student hub to inform parents and kids of their rights to freely read, access information and participate in other school and community activities in response to this and other instances of censorship.


"When you look at the history, when you look at historical lists of different titles that have been banned over the years or challenged over the years, a lot of people are surprised to see things that are considered classics that had been challenged in the past," Dease says. "We had a banned book challenge bracket on Instagram where we'd have people complete a survey of picking which of two different banned books that they liked the most and narrowed it down to our 'winners' and that's the basis for our trivia and book discussion events this month."

The J. Erik Jonsson Central Library in downtown Dallas is hosting a special exhibition through Sept. 30 in conjunction with its series "Big D Reads" to celebrate author and former Dallas Observer columnist Jim Schutze's book The Accomodation: The Politics of Race in an American City, now republished and sold by Deep Vellum 35 years after its tumultuous release. The original printing of the book in 1987 ended after the Dallas City Council's intense pressure to stop its publication and dispersal because of the book's dark dive into the racist roots that fueled violence and censorship throughout the city of Dallas for decades.

Sadly, book censorship has not subsided with time. Almost a year ago, Texas Gov. Greg Abbott started an unprompted order through the Texas Association of School Boards to remove books from school libraries across the state that he deemed as containing "inappropriate content." Districts such as Grapevine/Colleyville ISD followed with bans on Scholastic Book Fairs and removals of library and teaching materials that discussed "critical race theory and other systematic discrimination ideologies," "gender fluidity and gender theory" and a very broad definition of "pornography," according to school board records.

"There's a lot of it happening around the country and other parts of Texas," Dease says. "As libraries, we're particularly sensitive to it this year."
KEEP THE DALLAS OBSERVER FREE... Since we started the Dallas Observer, it has been defined as the free, independent voice of Dallas, and we'd like to keep it that way. With local media under siege, it's more important than ever for us to rally support behind funding our local journalism. You can help by participating in our "I Support" program, allowing us to keep offering readers access to our incisive coverage of local news, food and culture with no paywalls.
Make a one-time donation today for as little as $1.