That may not be the only thing the GCISD is trying to keep out of its schools. A policy proposed last spring could also target transgender students.

A set of guidelines called the Classical Social and Emotional Learning (CSEL) Policy, proposed to the GCISD board of trustees back in April, lays out the exclusion of certain books, materials and other instructional resources for students and teachers that discuss "critical race theory and other systematic discrimination ideologies," "gender fluidity and gender theory" and a broad definition of "pornography," according to school board records.

The guidelines also prohibit trans students from participating or competing in athletic events that are "designated for the biological sex opposite to the student's biological sex."

"I'm both conservative and Christian and one thing to note is that people from all political parties in our community are pretty upset with this new board majority," says Grapevine parent Mindy Russell. "Their current actions are neither conservative nor Christ-like. They are more along the lines of authoritarian behavior."

However, GCISD board vice president Shannon Braun wrote an editorial on the right-leaning news site The Dallas Express, owned by Ashford Hospitality CEO and Republican campaign donor Monty Bennett, describing the "transformation" of the district, which includes the elimination of 18,500 unspecified vendors that "poisoned the minds of children" and "sexualized our children."

"The board should not have to engage in this type of housecleaning but for too long the old guard sat back and encouraged the use of these types of materials," Braun wrote. "Not anymore."

Attempts were made to reach each of the GCISD's seven board members for comment on these issues but none offered a response on the record.

The district released a statement regarding the book fair cancellation, blaming Scholastic for not providing adequate documentation of the books it planned to put on sale. Scholastic Book Fairs offer up to 50 percent of proceeds back to participating schools, depending on final revenue totals, according to the Scholastic website.

"In the spring of 2022, there were books mis-merchandised by the vendor and students purchased books with content that was not age appropriate," the GCISD's statement reads. "After this occured [sic] and as a precaution, remaining book fairs were also put on hold for the end of the school year."

GCISD's statement blames Scholastic for not ensuring that the titles it sold at school book fairs would meet the district's requirements. The statement did not elaborate on those requirements and did not reply to questions about the titles they found objectionable. 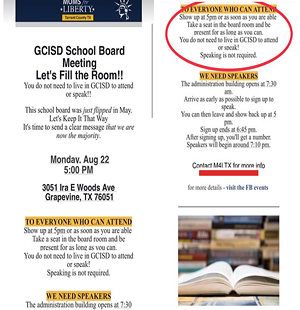 A flyer distributed by the Tarrant County chapter of the growing, nonprofit group Moms for Liberty. The group, known for championing conservative causes for parents' rights, urges members to show up in droves for Monday's meeting of the Grapevine/Colleyville Independent School District board meeting because "This school was just flipped in May. Let's keep it that way. It's time to send a clear message that we are now the majority."
Courtesy of Facebook

"In working with the vendor, we made requests to ensure that the sale of books that were not age appropriate would be avoided in the future," the statement reads. "Those requests included that the vendor provide a comprehensive list of the books that would be for sale at the fairs 14 days in advance, and at this time, the vendor has not offered assurances that they could comply with our expectations."

Anne Sparkman, a spokeperson for Scholastic, says the company is "disappointed" with the GCISD's decision to terminate their relationship. She also denies the district's claims that the book fair company did not try to address the district's concerns.

"When we were made aware of mis-merchandising during the fair experience, we of course immediately apologized and also investigated what more could be done to help avoid similar situations in future," Sparkman wrote in an email. "Adult Bestsellers are included at the request of customers, so that teachers, volunteers, and the broader community can shop. Given the volume of shoppers browsing the book fair, titles are sometimes picked up, browsed, and mis-shelved."

Some parents are speaking up against the school board and the measures, which some describe as censorship. Their grassroots efforts include the Protect GCISD website and the Moms4GCISD Facebook group, both of which are supported by the nonprofit group the Texas Bipartisan Alliance.

Protect GCISD has raised several areas of concerns about the school board and district's actions over the last four months, some of which have put them in the national spotlight. Most recently, the district fired Colleyville Heritage High School principal Dr. James Whitfield, the district's first African American principal, for speaking out against racism in the wake of the murder of George Floyd and for a letter he wrote to the school which noted that education is "the key to stomping out ignorance, hate and systemic racism."

Rachel Wall, the vice president of the Texas Bipartisan Alliance and mother of a Grapevine student, says the district's right-wing influence over the operations of the school curriculum and faculty has created a nickname among parents.

"Nobody's responded with what the policy is they expected from these book vendors," Wall says. "The word is that Scholastic executives have basically what they would consider to be progressive statements on social media and they decided that would not be appropriate because it would be reflected in the book choices they made."

"The board should not have to engage in this type of housecleaning but for too long the old guard sat back and encouraged the use of these types of materials. Not anymore." – GCISD board vice president Shannon Braun


The grassroots efforts are also being mobilized by citizens who support the new school board including some who aren't parents of students in the GCISD. A flyer distributed by the Tarrant County chapter of Moms for Liberty, a conservative nonprofit group known for packing school board meetings across the country to protest mask mandates and curriculum issues covering the history or teaching of LGTBQ rights, racial discrimination and science that contradict religious principles or doctrine, urges members to attend Monday's school board meeting in Grapevine.

"You do not need to live in GCISD to attend or speak!!" the flyer reads. "This school board was just flipped in May. Let's Keep It That Way. It's time to send a clear message that we are now the majority."

Wall says the only policy they've been able to determine came from the April school board agenda outlining the CSEL policy. Parts of the policy described the prohibition of materials and teachings that include any lessons of "meritocracy or traits such as a hard work ethic are racist or sexist or were created by members of a particular race of group to oppress members of another race or group," "the delivery of slaves and the advent of slavery in the territory that is now the United States."

"The issue for me is they're taking the choice away from us," Wall says. "[The board] ran on platforms of giving parents a choice, like if they want parents to have a choice of wearing a mask to school, but what they're doing is taking away my choice to let my child buy what books he wants to buy. My family can afford to go to Barnes & Noble's and buy books he wants to read, but the benefit of Scholastic is offering a reasonable price for families who can't afford to buy them that book."

The policy also specifically prohibits any instructional use or sharing of The 1619 Project, an initiative by The New York Times Magazine that aims to "reframe the country's history by placing the consequences of slavery and the contribution of Black Americans at the very center of our national narrative."

Section 3 of the policy outlines material that forbids any study, instruction or use of materials "adopting, supporting or promoting Gender Fluidity" across the district. It also targets student athletes who wish to participate in athletic activities.

The policy calls for the removal of any such materials found on district property. The policy does not prohibit "students from forming student-led groups or otherwise discussing such issues in private forums," according to the policy outline.

However, the policy establishes athletic guidelines in which "the district may not allow a student to compete in an interscholastic athletic competition sponsored or authorized by the district that is designated for the biological sex opposite to the student's biological sex."

"The district will not promote, require or encourage the use of pronoun identifiers for students, teachers or any other persons in any manner that is inconsistent with the biological sex of such person as listed on the student's birth certificate or, if not available, in a similar used legal document," according to the policy.

Braun wrote in a more recent editorial for the Dallas Express that the board will not budge on these and other recent issues implemented at the board level.

"We will not back down," she wrote. "We will not slow down. Too much is at risk for us not to embrace this moment."

Russell says these sweeping policy changes are transforming her children's schools and the district into from something wholesome into something harmful. These and other changes in personnel and policy affect her children's ability to get the kind of quality education she expects when she sends them off to school regardless of their political or religious affiliation.

"GCISD was an amazing destination district and it's being dismantled by a board majority who seems to have forgotten about the primary client that it serves: our children," Russell says. "My oldest child is a GCISD graduate who's currently at college on an academic scholarship. Education is important to my family."
KEEP THE DALLAS OBSERVER FREE... Since we started the Dallas Observer, it has been defined as the free, independent voice of Dallas, and we'd like to keep it that way. With local media under siege, it's more important than ever for us to rally support behind funding our local journalism. You can help by participating in our "I Support" program, allowing us to keep offering readers access to our incisive coverage of local news, food and culture with no paywalls.
Make a one-time donation today for as little as $1.