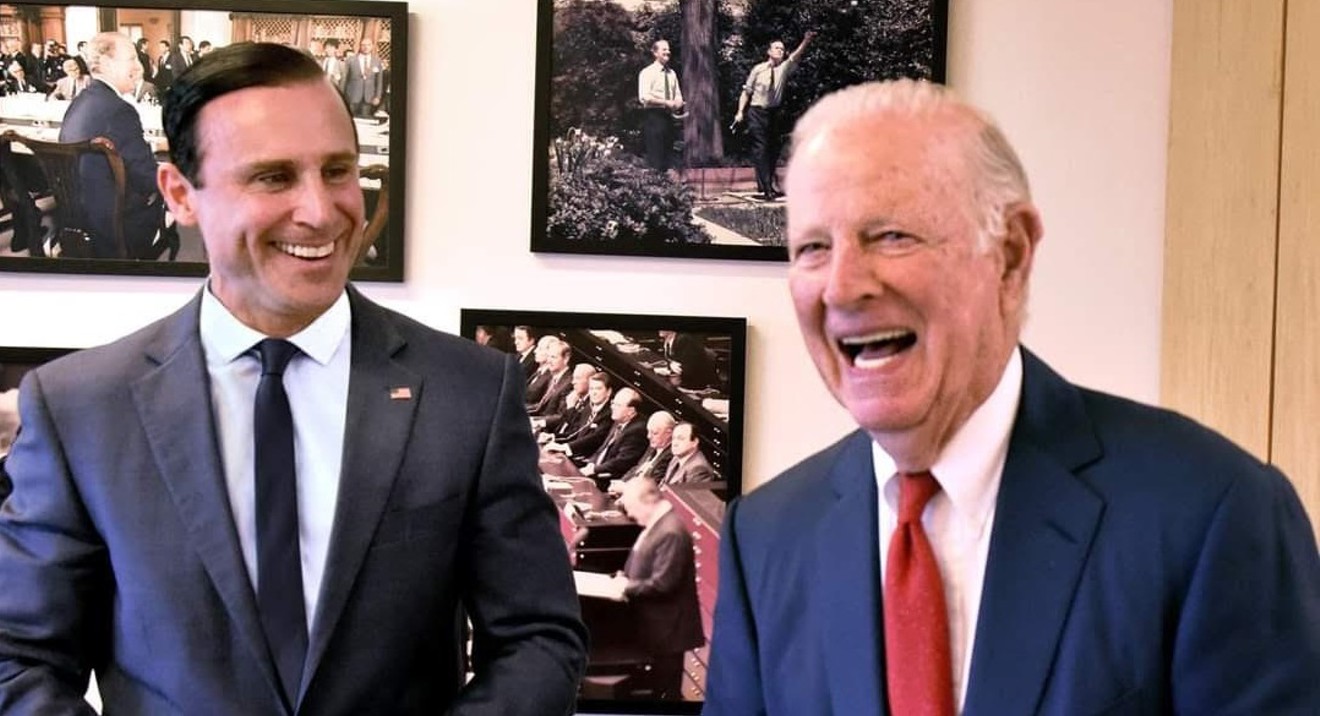 Author Charles Denyer with former Secretary of State James Baker lll, one of the subjects of Denyer's book Texas Titans. David Valdez
By chance, two Texans teamed up for a tennis doubles match. It would be the beginning of a decades-long friendship, and a powerful one in terms of politics.

“They went back-to-back men’s doubles championships by helping each other with their own weaknesses,” says Charles Denyer, author of Texas Titans. The book details the personal and professional relationship between former president George H. W. Bush and former Secretary of State James Baker lll, and is due to come out Nov. 17.

“By themselves, they may not have been the best singles player,” Denyer says. “But together as doubles, they were effective.

“They both knew in the political world they were much more effective together than they were apart,” Denyer continues, adding that Bush had reached out to Baker to help run his Senate campaign in 1970. “Though he lost, they continued nearly a quarter-century relationship in the political arena that was quite successful.”

Although Bush died before Denyer’s book project began, he’s met with Baker, now 90, for extensive interviews along with associates and key members of the Bush Library and the Bush Foundation, who provided edits for the book he says took about two years to write.

In his book, Denyer weaves a parallel tale of the two men, both of whom had enlisted in military service — Baker in the Marines and Bush a naval aviator — for a story he says hasn’t been told in the manner and detail he wanted to convey it.

“These two men and their actions came together as necessary,” he says, adding that outside of Houston, most people aren’t aware of the close relationship between the two. The author delved into it from the beginning when they were paired as tennis doubles partners at the Houston Country Club, where they were both members.

“What was Jim Baker doing when he was chief of staff to President Ronald Reagan?” Denyer asks. “George H. W. Bush, at that time, was vice president. And when Bush was president, what was Baker doing as secretary of state?

“[Ross Perot] prided himself on Men’s Warehouse suits and driving his own car and having lunch and grub with the regular people. He felt Bush thought he was above that and didn’t live on the level of the average person.” –Charles Denyer

“Time and time again the president leaned very heavily on the advice and the strategies of his foreign policy team, which was obviously headed by the Secretary of State James Baker,” he says. "It just goes to show you how their relationship on a personal and political level was very effective. A lot of the policies put forth was spearheaded and put forth by Baker.”

Denyer, who grew up in the Woodlands of North Houston and has also lived in Dallas’ Munger Place Historic District, is not involved in politics himself, he says, but writes about it as a side gig. Texas Titans, which has a foreword by former Vice President Dick Cheney, is his third book.

Denyer points out how Bush had “been knocked down many times.” He lost a Senate race in 1964, another one in 1970, and he lost to Ronald Reagan in the 1980 presidential primaries. Although he had won back-to-back congressional races in the 1960s, by the time he was chosen as vice president on the ticket with Reagan, he had experienced plenty of defeats.

“The true character of the man just kept getting up and fighting and moving forward,” he says. “Obviously, his biggest defeat, the one we all know about, was his loss to Bill Clinton, at the time a little-known governor from Arkansas. That one hurt him.”

Eventually, Bush and Clinton were able to put aside their political differences, Denyer says, and became good friends. However, Bush did carry a great deal of animosity toward Ross Perot, who had also entered the race stripping away votes, a fair number of them from Republican voters, he says.

Perot thought Bush took advantage of his Texan-hood and used Texas as “almost a carpetbagging way to go to the White House,” says Denyer, noting that although Perot was a billionaire, he “prided himself on Men’s Warehouse suits and driving his own car and having lunch and grub with the regular people. He felt Bush thought he was above that and didn’t live on the level of the average person.”

Denyer hopes Texas Titans will give readers a sense that even “in this contentious and dysfunctional political climate that we’re all in, stability still can reign,” he says. “Trust and competence are still paramount, and we can still believe in the goodness of serving the country.”
KEEP THE DALLAS OBSERVER FREE... Since we started the Dallas Observer, it has been defined as the free, independent voice of Dallas, and we'd like to keep it that way. With local media under siege, it's more important than ever for us to rally support behind funding our local journalism. You can help by participating in our "I Support" program, allowing us to keep offering readers access to our incisive coverage of local news, food and culture with no paywalls.
Make a one-time donation today for as little as $1.