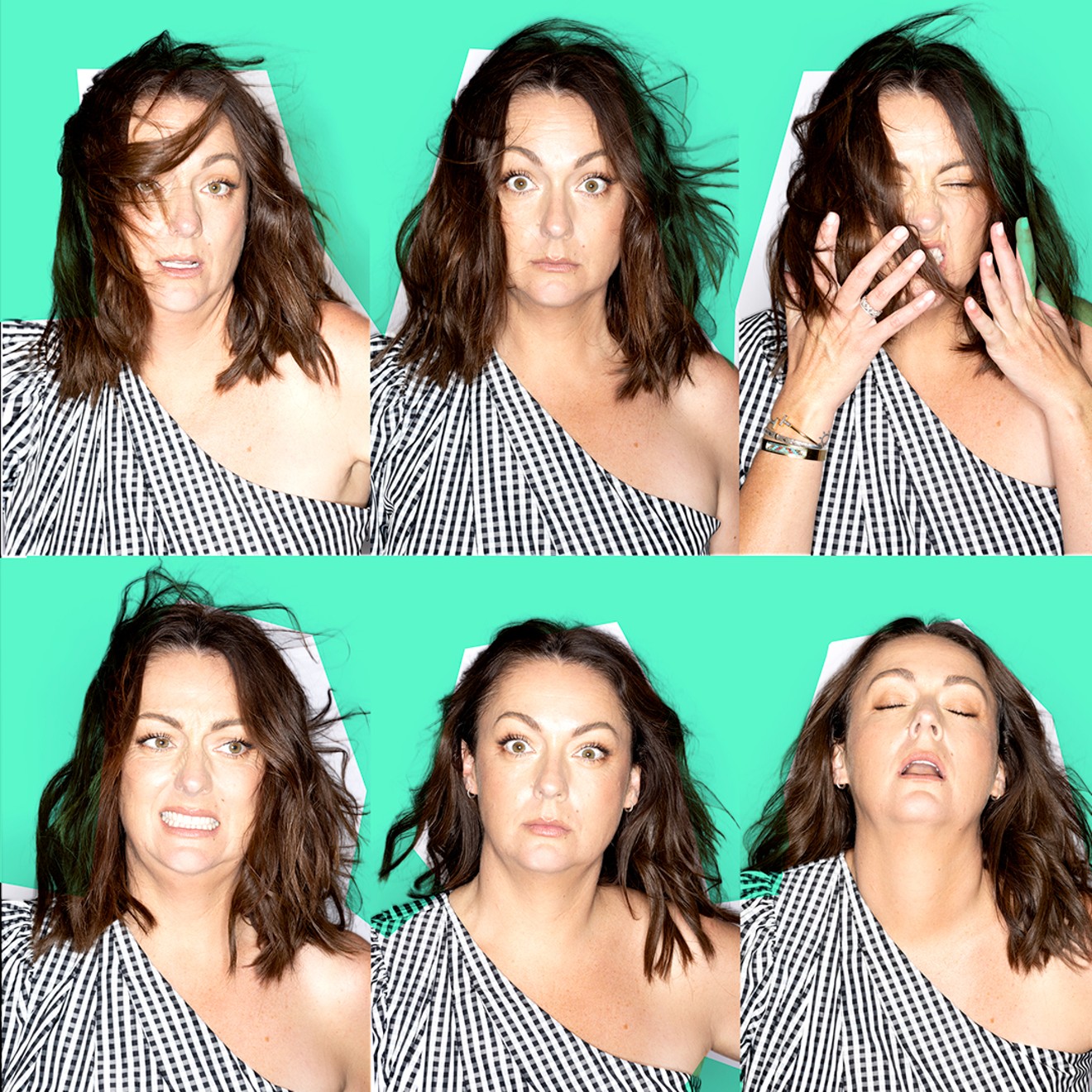 Celeste Barber says "Fine, Thanks" and more this Friday at the Winspear. Courtesy of AT&T Performing Arts Center 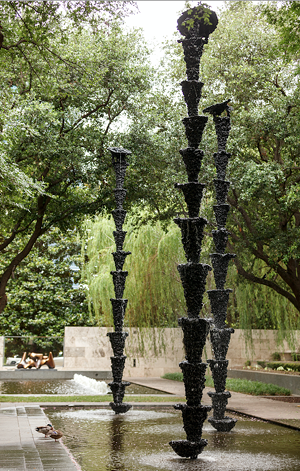 Lynda Benglis, Bounty, Amber Waves, Fruited Plane, 2014.
Kevin Todora
Lynda Benglis at Nasher Sculpture Center
With soaring fountains and captivating, rotund sculptures, Lynda Benglis has energized the Nasher Sculpture Center (2001 Flora St.) with overwhelmingly large works. The physicality of the exhibition is inspiring, humbling and a bit nostalgic — some of the bronze work is based on Benglis’ earlier ceramic pieces. They also have a bit of glitter. These are the last few weeks of the Benglis exhibition and it would be a dazzling error to miss seeing it before it’s gone Sept. 18. Admission is $10. For more info, visit the Nasher website.

David Koechner at Plano House of Comedy
This weekend is a real scheduling conundrum for comedy fans. One where you think, “These managers must not talk to each other. AND Jay Pharoah is at the Improv?!” Fortunately, Thursday gives you the best of the movie sidekicks with David Koechner (Anchorman and Todd Packer in The Office) bringing his own magic to the stage up against Kevin Hart at the AAC (but more on that later). See David Koechner at 7:30 p.m. Thursday, Aug. 11, at Plano House of Comedy (7301 Lone Star Drive, Plano) or various other showtimes Friday and Saturday (including Office trivia with Todd himself). Tickets and show details are all online. Twisted Pearl brings the jazz down from Chicago.
Courtesy of Twisted Pearl
Twisted Pearl at Arts Mission Oak Cliff
The thing that catches the eye most about the 7:30 p.m. performance Friday, Aug. 12, at Arts Mission Oak Cliff (410 S. Windomere Ave.) isn’t that the three young musicians are blown in from windy Chicago, or even that they’re offering up the Dallas premiere of William Flackton’s four viola sonatas (although, that’s pretty cool). It’s that they touted a concert of lesser-known music for low-pitched instruments. Immediately, we needed to know more, wanted to hear more and were excited there’d be free parking. With the program  High on Style, Conor Lyons (harpsichord), Zoe Douthit (cello) and Timothy Holman (viola), explore the confines of time in timeless music. It’s pay-what-you-want so don’t miss it. Find more info online.

Celeste Barber at Winspear Opera House
Instagrammers look sharp. She’s here. She’s crossed several ponds to be with us. Australian Queen of Comedy Celeste Barber has accepted the latest challenge to go on tour and floor us with laughter. She may not be parodying any ridiculous models in ridiculous poses, but her stand-up is worthy of our attention. And we’d say that even if she wasn’t one of "Variety’s 10 Comics to Watch" in 2019 (about the time she was raising $51 million to support the Rural Fire Service and Brigades Donation Fund when Australia was hit with devastating bushfires). She’s a force. And sure, we’ll say you can try to decide between two other comics tonight, but the real deal is at the Winspear at 7 p.m. Tickets are available online.

Neal Brennan at the Granada/
Kevin Hart at the AAC
Now, here’s a real comedy toss-up. Both headliners have offended their share of different audiences; both have made a huge impact on comedy and both are in the same Chase Freedom credit card commercial. Friday night offers up Kevin Hart at American Airlines Center in Victory Park and Neal Brennan at the Granada Theater (3524 Greenville Ave.). As of now, both shows are a challenge in terms of tickets, so if you don’t already have them you may have to sell plasma or something (or just see Hart on Thursday, which is a bummer for Koechner fans — see how hard this is?). Find out more about your options via Ticketmaster or the Granada. 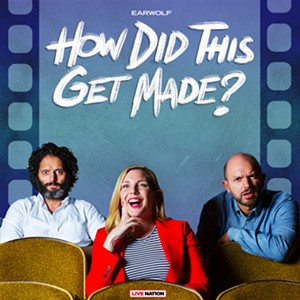 The podcast goes live to roast the best of bad cinema.
Earwolf Media
How Did This Get Made? On Tour at the Winspear
"So bad it’s good." That’s the way we’d describe many of our favorite movies. And apparently, that’s how Paul Scheer (The League), Jason Mantzoukas (The League, Brooklyn 99) and June Diane Raphael (Grace & Frankie) describe their favorites too. So much so that they’ve crafted an award-winning podcast about them called How Did This Get Made? Of course, you probably already know that since it’s one of the most popular podcasts around. Join them at 7 p.m. Saturday, Aug. 13, as they bring the casting live to the Winspear and dig deep into An American Werewolf in Paris. Get a question answered or help create a song in a once-only experience. Tickets start at $25.50, available online. 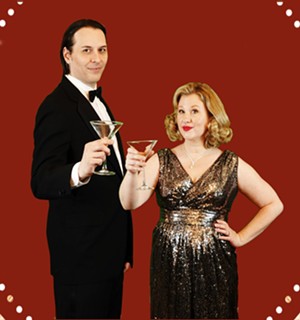 Private Lives features Travis Cook as Elyot Chase and Lauren Morgan as Amanda Prynne.
Jennifer Stewart
Private Lives at Arts Fort Worth
Stolen Shakespeare Guild is bringing the romantic, the tawdry and the kinda-paranoia-inducing to Arts Fort Worth (1300 Gendy St., Fort Worth) with Noel Coward’s Private Lives. Honeymooning with their new spouses, exes Elyot and Amanda meet again and find an old flame still burning. In a move that is somehow both modern Lifetime movie and classic Coward, they cut and run, eloping with each other. It should work out great, right? Sort of, but not really, and yet not terribly? It’s great for an audience, though. See for yourself as the play runs through Aug. 28. Tickets are $20-$28, available online.

Breaking Bad-iverse Trivia at Alamo Drafthouse Richardson's Glass Half Full
If you’re anything like us, you’re currently freaking out about having only one episode left ever of Better Call Saul. You’re planning your rewatch of Breaking Bad, so that you can hit El Camino one more time before firing up BCS yet again. And you’re wondering if anyone could’ve predicted that the legendary Carol Burnett would class up the joint even more in Saul’s last season. If you know who Skinny Pete is, shudder at the thought of making poison from beans, or feel like Walt Jr. deserved a better car every time the opportunity presented itself, then get to the Glass Half Full in Alamo Drafthouse Richardson (100 S. Central Expressway) at 2 p.m. Sunday, Aug. 14, for Geeks Who Drink’s Breaking Bad-iverse Vol 1. Trivia. Find out rules and more online. Waterworks (ha) in anticipation of Monday’s finale are perfectly acceptable.

Marvel-ous Night of Comedy at Hyena’s Dallas
Ever seen Iron Man do a set of stand-up? Or Scarlet Witch? Think Thor might handle a heckle better than Captain America? Find out at 8 p.m. Sunday, Aug. 14, at Hyena’s Comedy Nightclub (5321 E. Mockingbird Lane) during the Marvel-ous Night of Comedy. Fully costumed comics (Liem Smith, Chris Hopkins, Monna, Joey Johnson and others) do stand-up as their favorite superheroes. There’s also a roast and a costume contest so audience members are encouraged to don their most indestructible primary colors. It’s $15 in advance or $20 at the door, so get online.

Meso Maya's House Marg is on Visit Dallas' Margarita Mile.
Visit Dallas
Margarita Mile with Visit Dallas at various locations
Many people know that the margarita is an awesome drink, plentiful in most parts of Dallas. But lots of folks don’t realize that thanks to Mariano’s, Dallas is also the home of the frozen margarita. It’s only right then that Visit Dallas has perfected the margarita tour: The Dallas Margarita Mile. We like frozen margs, but aren’t frozen in time, so now there’s an updated, self-guided digital pass to help you check in, enjoy the best margaritas and maybe even score some swag. Check out sips at Meso Maya, Taqueria La Ventana, The Rustic, Beto & Son, Gloria’s and many others. Make it a Margarita Monday. Visit the Margarita Mile online to get started.

United to Learn book drive at Interabang Books
School is starting back up and that means this one universal truth: Teachers are spending their own money to stock their rooms with supplies, books and random stuff kids need. Let’s help remove one thing from that equation by heading over to Interabang Books (5600 W. Lovers Lane) and donating in increments of $10 to the United to Learn fundraiser to help local teachers fill up their shelves with awesome books for inspired young readers. Interabang has a great selection of children’s and YA books if you’d like to pick up some to donate to your neighborhood school directly. Or if you can’t swing by, donations to the fundraiser may be made online through Aug. 31.
KEEP THE DALLAS OBSERVER FREE... Since we started the Dallas Observer, it has been defined as the free, independent voice of Dallas, and we'd like to keep it that way. With local media under siege, it's more important than ever for us to rally support behind funding our local journalism. You can help by participating in our "I Support" program, allowing us to keep offering readers access to our incisive coverage of local news, food and culture with no paywalls.
Make a one-time donation today for as little as $1.
Merritt Martin
Contact: Merritt Martin