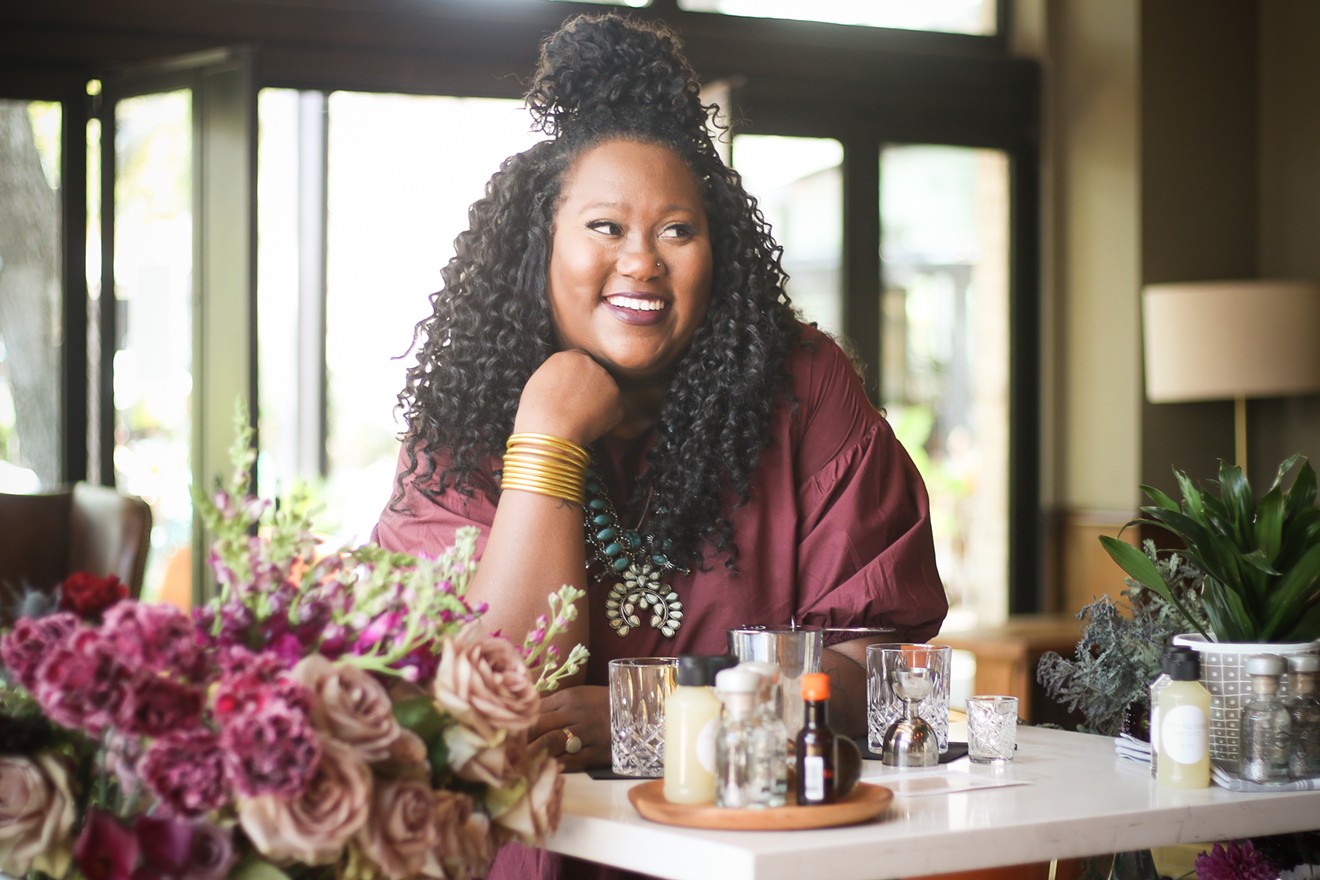 Bree Clarke's pretty tables are at the center of chats about ugly truths. RC Photography
It’s hard to chart exactly how Bree Clarke got to where she is now, but it’s easy to understand why. Since 2017, she’s been hosting workshops on tables that she crafted, talking to white women about diversity.
Her journey started years ago and actually had more to do with what she didn't have rather than what she did. Clarke and her husband, Carlos, endured some trying times early in their relationship. At times, they lived out of their car or slept on an air mattress.

The couple pushed through, and when they started a family, there was one thing in particular Clarke wanted: a kitchen table. The furniture piece may have been a simple wish, but it functions as a central role in many families.

“When we first got married, I couldn’t afford a farmhouse table,” Clarke says. “They were trending, and I saw them everywhere, but they’re so expensive. So, I started making them.”
Making farmhouse tables led to a career. Eventually, she and Carlos started selling them through Facebook and Clarke became known as “The Table Lady.” As her craft grew, Clarke started decorating the tables with floral arrangements for photoshoots and events.

As a natural extension, she tried to get involved in the wedding and event planning industry in Dallas, but never felt welcomed.

“There aren’t many brown girls and especially any that build farmhouse tables and do woodworking,” Clarke says with a light laugh. “I would see all these tables and all these beautiful style shoots, but I would never see any women of color actually participating in the style shoot.”

As her business and talent grew, Clarke says she felt that her tables were wanted, but she wasn't.

That’s when Clarke created The Iman Project, which includes workshops on inclusion and diversity.

“We need to talk about including everybody, no matter the color of their skin, and create that place for everyone,” Clarke says.

Clarke also saw a big disconnect in the Dallas community.  “People connect online, but offline it was fake,” Clarke says.

She felt there was a need for intentional communication.

“So I told Carlos, why don’t we create the tables for the community ...  meaning we share these ideas and workshops and DIY moments on the tables. So, that’s how 'On the Table Workshops with a Purpose' came about.”

Like a lot of things that Clarke is involved with, the workshops blossomed.

“The workshops became bigger than the furniture," Clarke says. "We still do our furniture because they basically got us here, so they’ll never go away. But, it’s mainly the workshops now. And the workshops led to the studio."

Now they share the space with other people who want to do workshops, pop-up markets, podcasts or release parties.
click to enlarge

Since the COVID-19 pandemic has spoiled in-person workshops, Clarke has moved to virtual connections.

About once a month she’ll post a virtual workshop online; tickets usually sell out in an hour. Local customers pick up kits to go along with the workshop at her studio. Or if it’s a national workshop, she ships the kits out.

When the day and time arrive, her guests log onto her site for a workshop that might include another artist guiding the group through a lesson in candle making or flower arranging, but the conversation is focused.

Clarke, who has two elementary-aged kids of her own, was in tune with the type of conversations communities were trying to have in June, after George Floyd's killing sparked civil unrest around the country.

“Everyone was about uncomfortable conversations, amplifying Black voices, the hashtags, the black boxes, et cetera," she says. "But, as we got further along, July, August ...  then we started hearing less and seeing less. So, the whole point of my workshops is to keep those conversations going. And to make them less uncomfortable, so you can have them more within your family and community. And that way it can grow."

Bree leverages her large following, which she points out is mostly white women, to create a bridge for this important dialogue.

Clarke explains that August was the first time she’s hosted a virtual workshop where the women literally stopped what they were doing and gave their full attention to her.

Clarke says that it was the first time the women didn’t see the flowers, but just saw her.

“A Black man had to stop breathing for me to breathe, for me to be heard and understood, and that’s really sad and it bothers me a lot," Clarke says, "but also as a silver lining it opened up eyes for others to see what people of color are experiencing. That’s what my workshops are all about."

Her goal with the back-to-school workshop was to open up the conversations for parents to have with their kids. Clarke clarifies that her intention isn’t to teach someone else’s child anything, but rather give parents the tools to share with their own families.

“I have a huge following that is mostly white. So, I want to make sure that I’m still having those conversations so that when they do go back to their communities, and their schools, and their PTA meetings that they’re still amplifying their voices,” Clarke says.

You can follow Clarke's Instagram page for more about what diversity and inclusivity mean to her, as well as her many projects that Clarke is working on.
KEEP THE DALLAS OBSERVER FREE... Since we started the Dallas Observer, it has been defined as the free, independent voice of Dallas, and we'd like to keep it that way. With local media under siege, it's more important than ever for us to rally support behind funding our local journalism. You can help by participating in our "I Support" program, allowing us to keep offering readers access to our incisive coverage of local news, food and culture with no paywalls.
Make a one-time donation today for as little as $1.