Choose Your Chill Level for a Spooktacular Teen (and Tween) Halloween The scares are vintage at Dallas' Old City Park. Courtesy of Old City Park
It's easy to sell Halloween to young children and adults. The little ones get to trick-or-treat, and the adults get to drink at slutty themed parties. But there's one demographic that's harder to impress — generally always, but especially with a holiday centered on candy, ghouls and pumpkins. When entering a dirty, dark maze full of overly grabby actors loses its luster, what’s an adolescent Halloween fan to do? North Texas offers a variety of prime, teen-approved activities that’ll satisfy every level of scare. Here are the best local Halloween events guaranteed to get kids of all ages into the spirit of the season. The only thing going on in Frisco that's scarier than Frights'n Lights is probably going to Ikea with your significant other.
Kendall Morgan
Frights’n Lights
Riders Field, 7300 Roughriders Trail, Frisco
If your kids aren’t quite ready for a haunted house, take ‘em to Frights’n Lights in Frisco instead. Billed as the “Ultimate Halloween Adventure in Texas,” this fest was made to fill the gap between basic pumpkin patches and blood-and-gore haunted houses. Kids can ride a giant bucking pumpkin, wander through a not-so-scary Headless Horseman Haunted Hay Maze or strike a pose in one of the Insta-worthy sets. If you splurge for a VIP pass, your charges will also take home a new cavity’s worth of sugary treats. Although the event skews heavy on lights (not so much the frights), we can see it being a hit with tweens while Mom sips wine at one of the many bars stashed around Riders Field. Say hello to Herman and all the other Munsters in Waxahachie.
Kendall Morgan
The Munster Mansion
3636 FM 813, Waxahachie
If your kids loved the recent Munsters reboot on Netflix, take them on a private tour of the frightful family’s abode in Waxahachie. A labor of love from owners Sandra and Charles McKee, this Munster Mansion is a note-perfect re-creation of the house from the beloved '60s sitcom. The McKees watched each episode over and over to painstakingly craft the sets with real and reproduction props, including the coffin phone booth, Grandpa’s lab and Spot the Dragon’s lair under the stairs. It may be booked for 2022, but it’s never too early to reserve a spot for next Halloween. Homeowners in the M Streets neighborhood in Dallas and Watters Creek in Plano go all out with Halloween decorations.
Kendall Morgan
Skelly Spotting
Swiss Avenue
M Streets between Central Expressway and Greenville Avenue
Kessler Park
Watters Creek, Plano
Dallas is light on the leaf peeping, but there’s nothing stopping teens from pre-gaming for trick-or-treating with a nightly neighborhood tour of the best décor in North Texas. Swiss Avenue is famed for its lavish displays, but Kessler Park in Oak Cliff and the M Streets off Greenville have upped the spook stakes in recent years, as has the Watters Creek area in Plano. Count how many Halloween enthusiasts managed to get their hands on that 12-foot-skeleton from Home Depot. Those masks are pretty creepy at Old City Park.
Courtesy of Old City Park
Ghosts With the Most
1515 S. Harwood St.
Who doesn’t love getting up close and personal with the paranormal? At Dallas Heritage Village in Old City Park, visitors can (hopefully) engage with unseen presences during a "Paranormal Investigation Tour." Or opt for the Park’s Victorian Spectre Tour to learn more about its “wild, weird, mysterious and creepy history.” 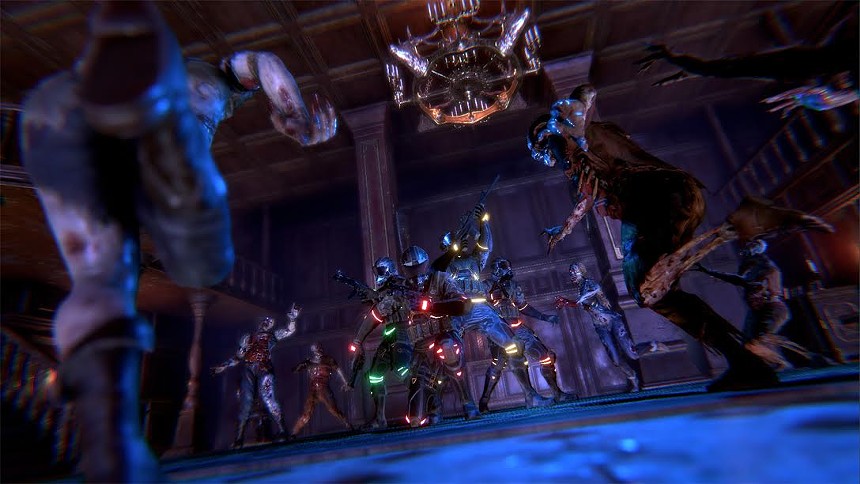 Enjoy 3D zombie hunting at Sandbox VR.
Courtesy of Sandbox VR
Undead Adventure
5321 E. Mockingbird Lane, No. 110
Anyone who has watched The Walking Dead has probably thought, “These people are idiots; I’d totally survive a zombie apocalypse.” Well, we’ve got news: You probably won’t. But just in case, hone your teen’s zombie-killing chops at Sandbox VR. Up to six players choose their preferred weapons, suit up in high-tech VR gear and start slaying the undead in one of two eerily lifelike adventures, Deadwood Valley and Deadwood Mansion. Choose the Amber Sky 2088 experience if annihilating aliens is more their thing.

TikTok Terrors
2201 E. Road to Six Flags St., Arlington
If there was ever a Halloween event made for this social media platform, it would be the annual Fright Fest at Six Flags. Trepidatious teens will opt for the rides and avoid the roaming ghouls across the park, while the brave can explore six new scare zones plus “Monstertainment” live shows. But if the kids choose to up the creepy quotient, add on a Haunted Attraction Pass to hit up six haunted areas ranging from a BBQ blood shed to a ghostly murder mansion. Don’t forget to share the scare for all the hearts!

Spooky Staycations
1321 Commerce St.
109 W. Exchange Ave., Fort Worth
The Adolphus Hotel isn’t just a chic and elegant downtown landmark, it’s also reportedly haunted by countless victims who have fallen down the elevator shaft (among other untimely deaths). And Miss Molly’s Hotel in Fort Worth — a former boarding house and bordello — is full of saucy spirits who love to flush the toilets and flick off the lights. Why not book a room in one of these hotels for a family Halloween staycay? Don’t forget to pack your EMF reader to make some new friends while the veil is thin.
KEEP THE DALLAS OBSERVER FREE... Since we started the Dallas Observer, it has been defined as the free, independent voice of Dallas, and we'd like to keep it that way. With local media under siege, it's more important than ever for us to rally support behind funding our local journalism. You can help by participating in our "I Support" program, allowing us to keep offering readers access to our incisive coverage of local news, food and culture with no paywalls.
Make a one-time donation today for as little as $1.