This June, Massive Dinosaurs Will Shake the Ground of Grandscape 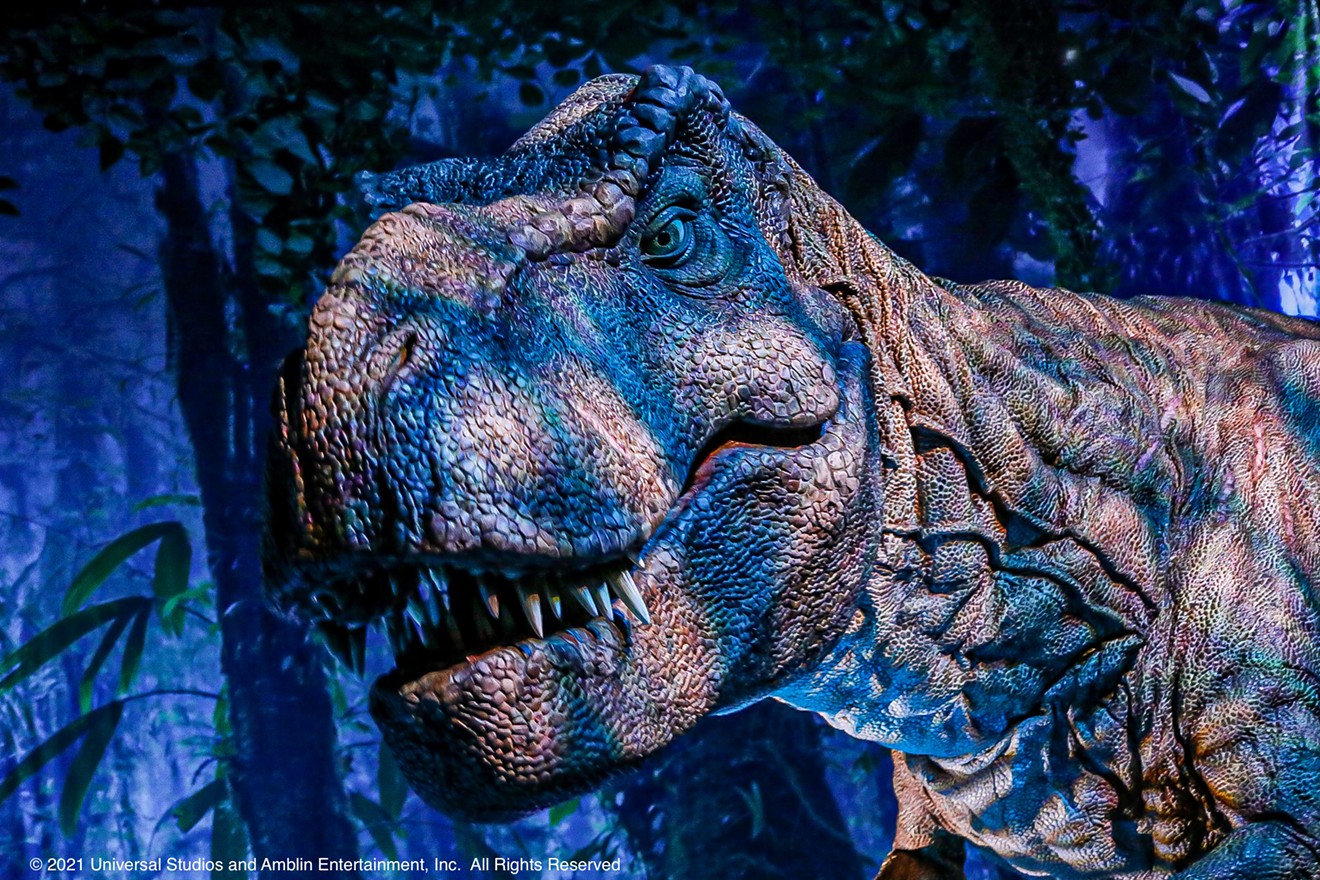 Jurassic World: The Exhibition © 2021 Universal Studios and Amblin Entertainment, Inc. All Rights Reserved.
Without the Jurassic Park and Jurassic World films, humanity would have never learned the perils and pitfalls of playing God for the betterment of the theme park industry. Of course, the lessons from the movies may not stop the next batch of stubborn scientists with a tablespoon of dino DNA from trying anyway, just because they think they're smarter than fictional characters. Has Jeff Goldblum taught us nothing?

A new touring attraction called Jurassic World: The Exhibition shows what a live dinosaur zoo would look, feel and sound like but without all the unnecessary carnage and liability risks when the creatures inevitably overcome their constraints and human captors.

The exhibition opens June 18 at the Grandscape center in The Colony and will run until September 5. Tickets are available through the tour's official website.

The 20,000 square-foot experience aims to replicate the environment of a real-life dinosaur zoo complete with a virtual ferry ride to Isla Nublar and the chance to walk through the giant arch doorway that made Ian Malcolm remark, "What do they got in there, King Kong?"

"For us, we want to bring visitors into Jurassic World as opposed to sitting in a seat and watching Jurassic World," says Stephen Shaw, the founder and co-president of Round Room Live, which produced the Jurassic World exhibition. "Guests truly are able to imagine what it would be like to be an attendee at Jurassic World and walk amongst these breathtaking creatures."

The exhibition will house several life-size animatronic replicas of the dinosaurs from the films, including a 40-foot-tall brachiosaurus, a meat shredding Tyrannosaurus Rex that sports a 4-foot long jaw of finely sharpened teeth and the crime against genetics known as the Indominus Rex.

Guests can meet, pet and have their picture taken with Bumpy, the baby ankylosaurus from Jurassic World: Camp Cretaceous.
Jurassic World: The Exhibition © 2021 Universal Studios and Amblin Entertainment, Inc. All Rights Reserved.
The attraction also contains a replica of the Hammond Creation Lab, where guests can see baby dinosaurs crawl out of their eggs and even get close enough to pet some of the creatures including Bumpy, the baby Ankylosaurus from the Netflix animated series Jurassic World: Camp Cretaceous.

Guests can even get dangerously close to a herd of adult raptors held in form fitting muzzle restraints to prevent them from planning a sneak attack and eating you while you're still alive.

"Being able to get up close and personal with these dinosaurs is the magic," Shaw says. "These enhanced, animatronic dinosaurs look and sound as real as you could possible get."

"We're really excited about bringing this to a market like Dallas," Shaw says. "In every market we've brought this to nationally and globally, the show has sold out."

Visitors to the new Jurassic World: The Exhibition attraction at Grandscape in The Colony will walk through the park's iconic doors where they are greeted by a 40-foot-tall brachiosaurus.
Jurassic World: The Exhibition © 2021 Universal Studios and Amblin Entertainment, Inc. All Rights Reserved.
KEEP THE DALLAS OBSERVER FREE... Since we started the Dallas Observer, it has been defined as the free, independent voice of Dallas, and we'd like to keep it that way. With local media under siege, it's more important than ever for us to rally support behind funding our local journalism. You can help by participating in our "I Support" program, allowing us to keep offering readers access to our incisive coverage of local news, food and culture with no paywalls.
Make a one-time donation today for as little as $1.