Dora Reynosa, aka By Zeneth, is filling Dallas' walls with her art. Elesé Arias
Artist Dora Reynosa stands in front of a canvas propped up by an easel, and the world falls into the distant background. In that moment, it is only Reynosa and her inner child, for whom she produces playful, abstract designs.

Reynosa's paintings are made up of precise, delicate linework that securely envelops the bold bright colors and shapes that dance along the canvas. Her art serves as a visual exploration of the inner child, she says, who provokes healing, nurturing and joy.

“A lot of us forget what it was like to feel that joy, to feel that carelessness and to have hope in the world that we live in,” Reynosa says. “I like to create that opportunity for people. My paintings create the opportunity to think about what these colors mean to you, what this movement means to you, what this free spirit and fluidity means to you.”

Known artistically as By Zeneth, the vibrancy in Reynosa’s acrylic paintings are reminiscent of Mexico’s neighborhoods where homes, like the one belonging to her grandmother, brighten up the landscape with lime green exteriors and Pink Panther-colored interiors — a stark contrast to the muted concrete landscapes of American cities.

Reynosa reimagines a childlike frankness through abstract designs inspired by modernist compositions, Mesoamerican glyphs and the human need for expression. This April, her artwork will grace the back of Deep Ellum’s The Factory as the latest addition to the mural project known as the Deep Ellum Foundation’s Blues Alley. Reynosa’s abstract rendition of a saxophonist will pay tribute to Dallas’ blues roots. It will stand alongside Romanian artist Dan Colcer’s mural of Erykah Badu. Reynosa’s mural will put a stamp on the city that saw her rebirth.

Reynosa’s artistic roots first sprouted when she was only 3 years old. In her hometown of Acuña in Coahuila, Mexico, Reynosa was introduced to the visual arts by her father. As a toddler, he exposed her to coloring techniques using one-hand single strokes ingraining in her young mind the importance of the artistic process. When she was 4, Reynosa's parents divorced and she used art to grasp onto her distancing relationship with her father.

Reynosa says that cartel violence and crime made life in Mexico unbearable for the young family. Her mother sought refuge alone in the U.S. in 2005, leaving Reynosa and her older sister behind. In 2006 at the age of 11, Reynosa and her sister would flee Mexico to join their mother in La Porte, Texas.

“The culture shock was crazy,” Reynosa says. “We didn't speak English. There was a big, big difference in the way that things looked. Everything was so repetitive and beige.”

Reynosa's uprooting from the comforting familiarity of Mexico brought on a dark emptiness that would follow her into adolescence. Her home in the U.S. was in a makeshift space; Reynosa and her mother and sister slept in the living room of a family friend. In the years following her move, Reynosa struggled with her identity and with depression. She reacted by rebelling.

“A lot of people didn't like being labeled as Mexican,” Reynosa says. “It's the stigma that we're undocumented, or we're here to steal jobs or take advantage of a system, and I became very knowledgeable on what it was to be undocumented. I didn't think I was going to be able to go to college ... until 2012.”

On June 15, 2012, President Barack Obama announced the Deferred Action for Childhood Arrivals (DACA) policy, which allowed individuals under the age of 31 who migrated to the U.S. as children prior to turning 16 and resided in the U.S. since June 2007 to get a two-year stay. Reynosa’s future shone with new opportunities.

“DACA has enabled roughly 832,881 eligible young adults to work lawfully, attend school, and plan their lives without the constant threat of deportation,” according to the American Immigration Council.

Reynosa left La Porte in 2013 to attend the University of Texas at Arlington’s architectural design program. Without a creative outlet, she leaned on alternative methods to navigate her new environment. 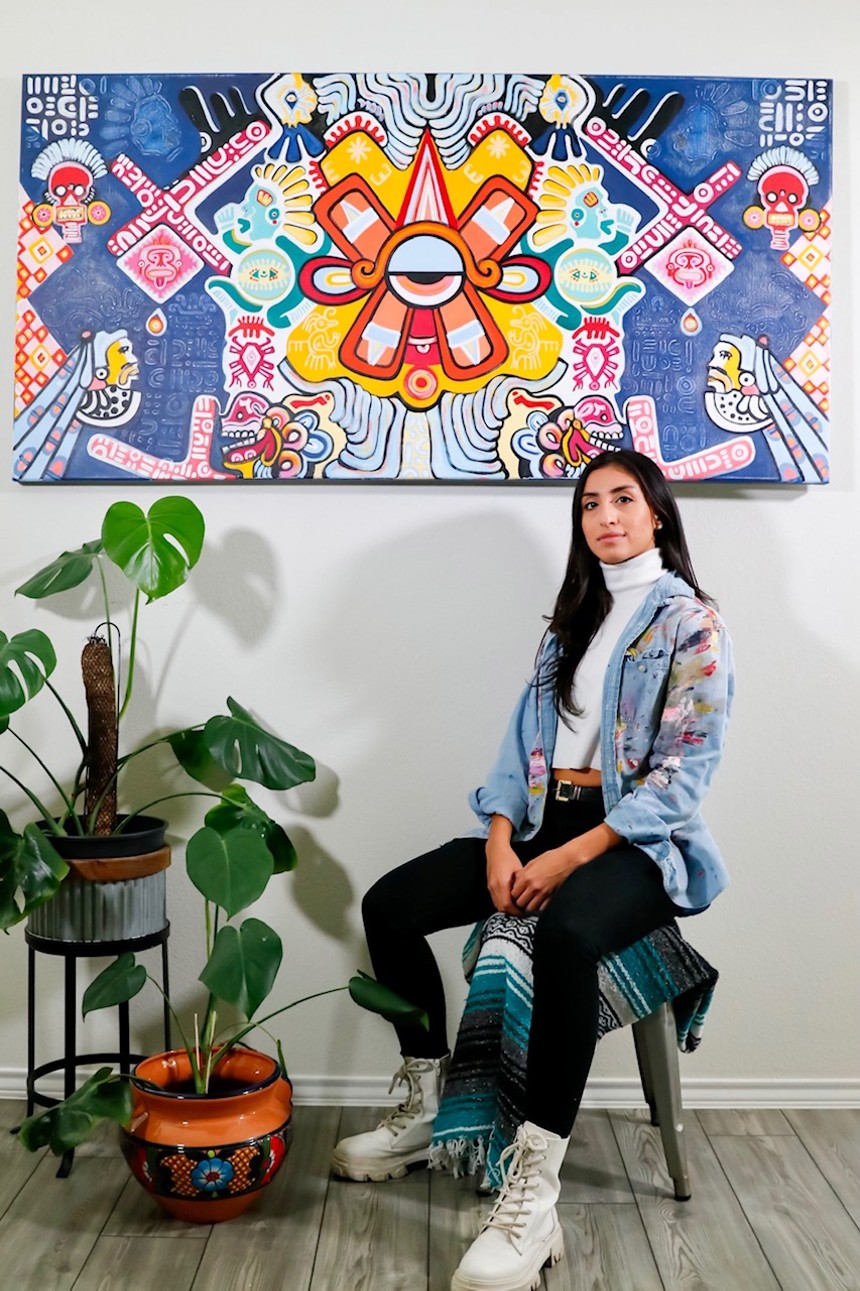 Artist By Zeneth overcame trauma and addiction thorugh art.
Elesé Arias
“I wanted people to know that I was special, that I wasn't anybody to be neglected and I wanted people to know that I was there,” Reynosa says. “I was a kid that really just wanted to be the center of attention and that was because I was so emotionally neglected. As children that's something that we need … Otherwise, you end up with behavioral issues as you grow up, which I did, I ended up with a lot of behavioral issues that I didn't understand at the time.”

Reynosa’s college life was landmarked by alcohol and drug-fueled partying. Her rage and self-sabotaging behavior sent her grades and relationships plummeting. Her future began to slip out of grasp. Sexism in the architectural field, college pressures and untreated trauma led Reynosa to develop an alcohol and drug dependence that would tip the scale.

“I wasn’t supposed to be alive right now, I had made a choice to end my life in 2018 and after a failed suicide attempt I felt even worse,” Reynosa said in a recent Instagram post. “I still didn’t know how to love, how to accept love or how to stay happy. I didn’t know that life is a full spectrum of emotions, they are not good or bad.”

After a hospitalization, Reynosa went through psychiatric evaluations and in-patient treatment. That following week, she picked up a paintbrush for the first time in years.

With bandaged wrists in a makeshift home gallery, Reynosa created a space of healing and began to reinvent herself as an artist. Each brush stroke nuzzled away at the pain she had suppressed through her assimilation to American culture in the midst of generational trauma. She immersed herself in artistic expression. Her first painting was a bold, bright abstract beacon reclaiming her future.

Shortly after, she was commissioned to create "Yaya," a one-line painting of a woman’s figure. That line would set the groundwork for the signature By Zeneth line work.

Today, Reynosa is only a semblance of the person she once was. Her family and friends continue to be reacquainted with this new version.

“I'm still getting to know this girl,” Denisse Carrera, Reynosa’s college friend says. “We're literally two different people from who we were when we first met. We both left our old selves.”

Carrerra credits Reynosa for her resurgence and success.

Reynosa now nurtures her inner child through her artwork with an emphasis on the image of an eye in many of her pieces. The eye serves as a tangible confirmation of being seen and valued. In her works, she wants to convey healing, at an affordable price.

By Zeneth now sells artwork throughout the U.S. and internationally to Japan. Several of her murals adorn the walls of Dallas. Recently, Reynosa collaborated with Houston artist Amanda Phingbodhipakkiya on a mural for Houston’s Asia Society Texas Center.

Reynosa was welcomed into the cafeteria of Beck Elementary in Garland this month with children chanting her name as she began to paint a mural. She hopes to raise mental health awareness for youth through community outreach. Her goal is to collaborate with Dallas organizations and businesses to create a community mural where children and adults can nurture developmental trauma symptoms with artistic self-expression.

First, she will celebrate her own triumph by contributing to Blues Alley.

“They say people don't change,” Carrera says. “Well, I don't believe that. Dora is living proof that people can change.”
KEEP THE DALLAS OBSERVER FREE... Since we started the Dallas Observer, it has been defined as the free, independent voice of Dallas, and we'd like to keep it that way. With local media under siege, it's more important than ever for us to rally support behind funding our local journalism. You can help by participating in our "I Support" program, allowing us to keep offering readers access to our incisive coverage of local news, food and culture with no paywalls.
Make a one-time donation today for as little as $1.