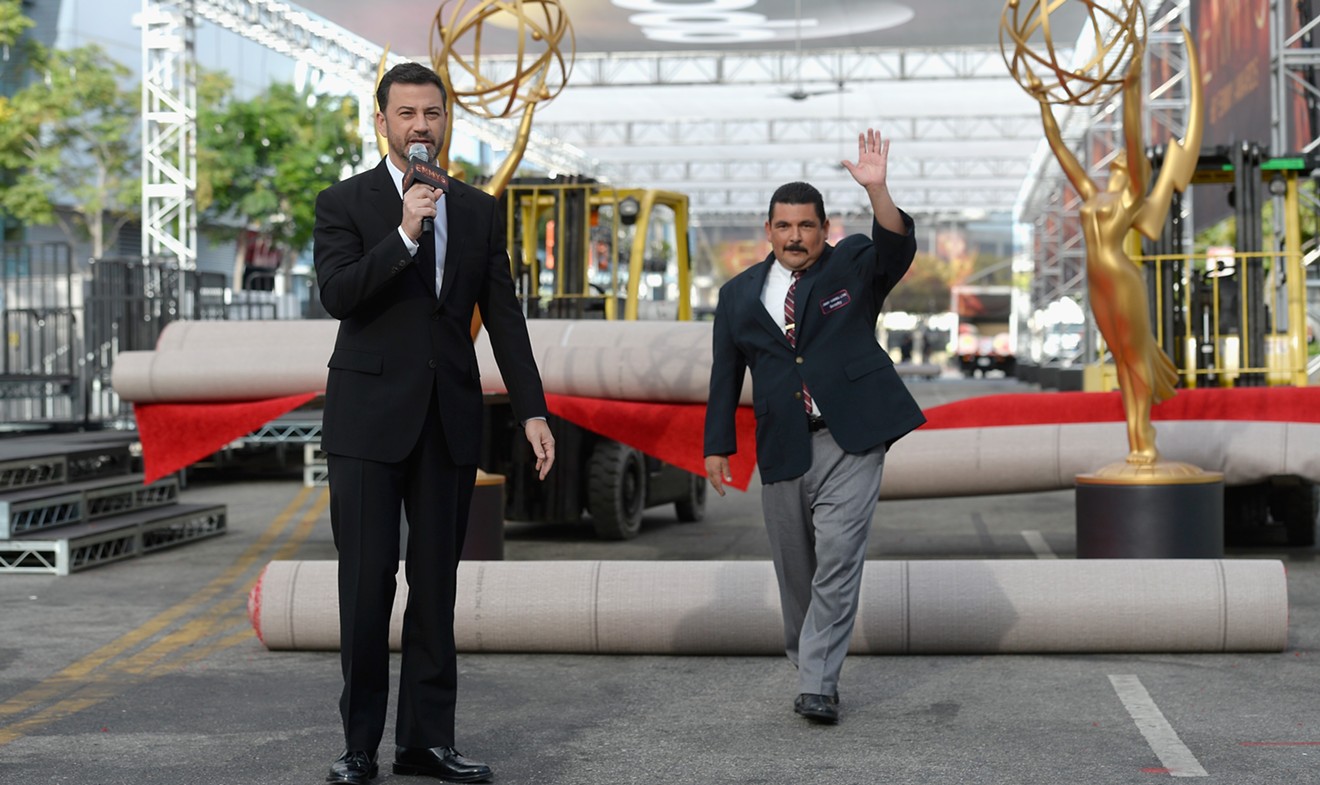 Late-night host Jimmy Kimmel and hilarious pal Guillermo, who's always up for anything. kens5.com
Hollywood is making a quick stop in Dallas by way of the Guillermobile. Patrons stopping in the Skillman Mariano’s Hacienda will not only be treated to the restaurant’s classic Tex-Mex — served in Dallas since 1971 — they might also catch a glimpse of Jimmy Kimmel Live! fixture Guillermo, as he makes Dallas one of his four destinations on his comedy tour for the late-night show.

Mariano Martinez, owner of Mariano’s, says he was excited to receive a call from the show asking if they would be interested in welcoming Guillermo as one of his limited stops for Kimmel, but after not hearing back from production for a period of time, he assumed the show had picked another destination. Martinez remembers that the moment he stopped waiting for a call, the word came that his restaurant had won the coveted spot, beating out the flashier State Fair.

“That right there in itself was an honor,” Martinez says. “That they picked Mariano’s over the State Fair of Texas, with all the activities and the corny dogs, and Big Tex and everything else. I don’t know how they made that decision, but I’m just happy they did.”


“That right there in itself was an honor. That they picked Mariano’s over the State Fair of Texas, with all the activities and the corny dogs, and Big Tex and everything else.” — Mariano Martinez

There’s no word on exactly what Guillermo will be doing when he arrives to Mariano’s, but it’s safe to assume the staff and anyone within reach of the security-guard-turned-TV-sidekick, should stay on their toes. Guillermo interviews are known for catching those under the spotlight off guard in the most unexpectedly hilarious ways. 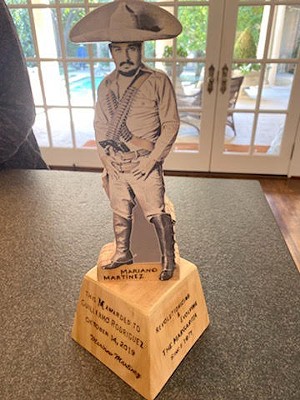 Martinez's version of an Emmy, which he had made for Jimmy Kimmel Live! sidekick Guillermo
Mariano Martinez
Dallas is the first stop of Guillermo’s four-city tour leading up to Kimmel broadcasting a week of shows from New York. Dallas makes the first stop, on Oct. 14, followed by Chicago on Oct. 15, Pittsburgh on Oct. 16 and Philadelphia on Oct. 17.

This won’t be the first time Martinez has had network TV camera crews in his presence. In 2011, Nightline ran a profile on Martinez, as the successful restaurateur owns two Mariano’s and five locations of La Hacienda Ranch spread across North Texas. Martinez  is also known as the inventor of the frozen margarita machine. At the time Nightline interviewed Martinez, his original frozen drink dispenser had been placed in the Smithsonian National Museum of American History. Martinez proudly says the machine is still on display next to Julia Child’s kitchen in the D.C. museum.

Martinez says Kimmel's producers did not ask for anything out of the ordinary prior to their arrival for filming, but always the gracious host, Martinez is prepared to greet Guillermo with a present.

“I made a special little Emmy for him,” Martinez says. “In Spanish the letter M is pronounced Emmy, so it’s a little mini Tex-Mex Emmy. I had a friend of mine carve it out of wood … and it has my picture wearing a Mexican revolutionist outfit, for revolutionizing the margarita industry. And then you unscrew my head and sombrero, and it’s got a little hidden tequila thing.”

Martinez estimates the filming should take place around 6 p.m., and the footage will air later that evening, giving everyone a chance to see a slice of Dallas given the Hollywood treatment.
KEEP THE DALLAS OBSERVER FREE... Since we started the Dallas Observer, it has been defined as the free, independent voice of Dallas, and we'd like to keep it that way. With local media under siege, it's more important than ever for us to rally support behind funding our local journalism. You can help by participating in our "I Support" program, allowing us to keep offering readers access to our incisive coverage of local news, food and culture with no paywalls.
Make a one-time donation today for as little as $1.