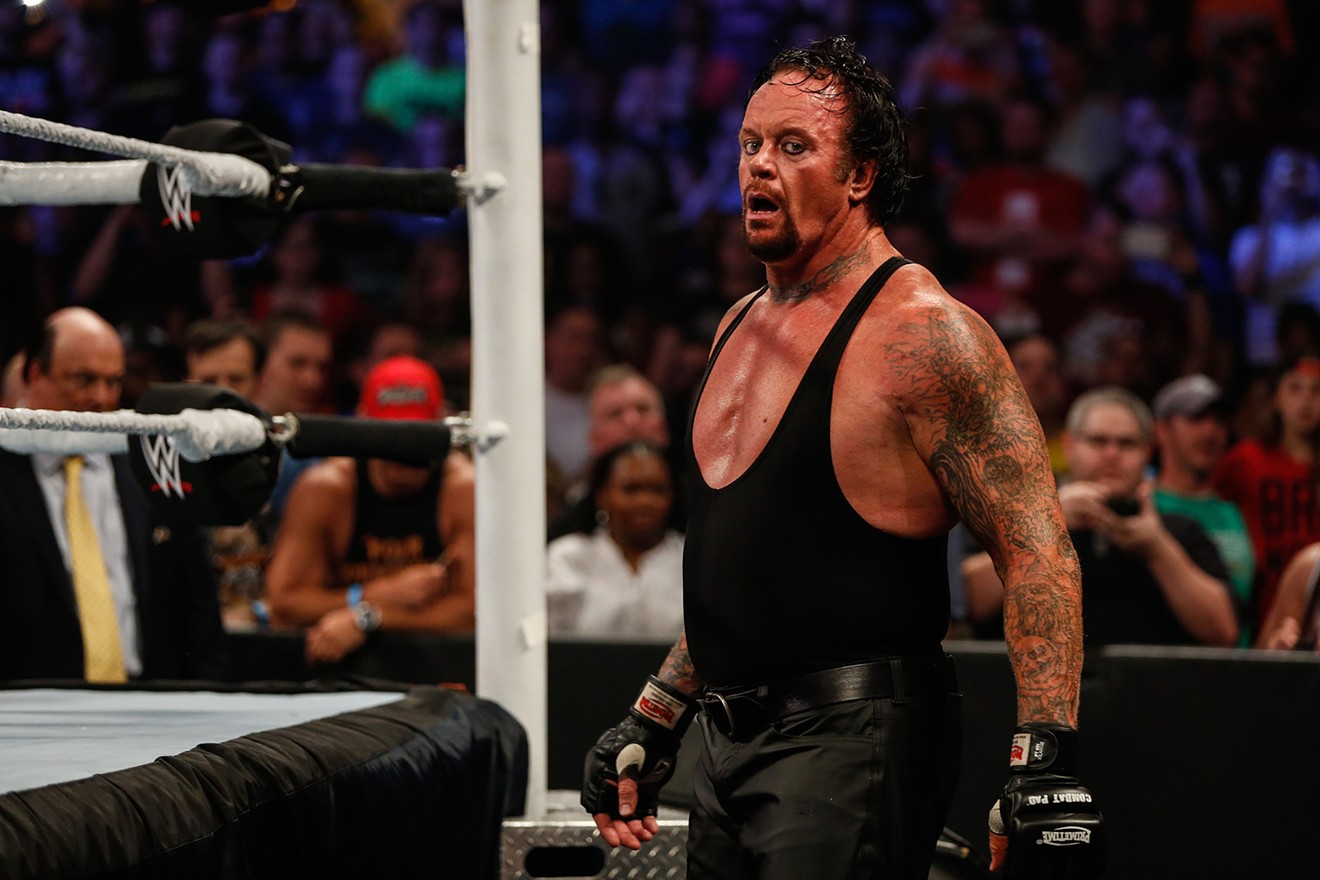 Texan Mark "The Undertaker" Calaway will be inducted into the WWE Hall of Fame after a 30-year run. JP Yim/Getty
One of the most popular wrestlers of all-time, The Undertaker, a Texas native whose real name is Mark Calaway, will be inducted into the WWE’s Hall of Fame at a ceremony held at the American Airlines Center on April 1, two days before WrestleMania kicks off.

The Undertaker’s illustrious wrestling career got its start in 1987 in the heart of Downtown Dallas at the wrestling mecca known as the Dallas Sportatorium, where he wrestled as Texas Red. The Sportatorium and the World Class Championship Wrestling are best remembered for hosting the bitter match between two rival teams: the hometown team Von Erich Family and the Fabulous Freebirds, but it was on a summer day in 1987 when Dallas wrestling fans witnessed Texas Red make his debut in a match against Bruiser Brody.

After World Class Championship Wrestling merged with another local wrestling promotion, The Undertaker began wrestling in World Championship Wrestling (WCW) under the moniker “Mean” Mark Callous, primarily in tag team and mid-card matches. The story goes that management in WCW was never as keen on Calaway as a main draw, except for WWE (then known as WWF) head honcho Vince McMahon.

In 1990, Calaway made his WWF debut as The Undertaker at the Survivor Series event. As a gimmick, The Undertaker character never should have had the longevity that he did. Standing nearly 7 feet tall, Calaway dressed like a Western mortician with purple gloves, walked slowly (he would sometimes take up to 10 minutes to enter the ring), as his manager, Paul Bearer, carried around a mysterious urn that would somehow give The Undertaker the strength and power to overcome his opponents. Even in the cartoonish world of WWF in the late '80s and early '90s, it was a little much.

But credit has to be given to the man behind the gimmick for making it last for 30 years and for becoming one of the most popular and recognizable wrestlers of all time. This past weekend, The Undertaker made a surprise appearance at the Bad Bunny concert in Dallas to a chorus of screaming fans.

WrestleMania and The Undertaker are pretty much synonymous. From 1990 through 2020, The Undertaker was on the collector cards for WrestleMania all but three times. His final match before retirement was against AJ Styles in the cinematic Boneyard Match at WrestleMania 2020. Calaway compiled 25 wins at the event including an unprecedented 21-0 run that wrestling fans refer to as “The Streak.” The last WrestleMania in Dallas back in 2016 saw The Undertaker defeat Vince McMahon’s son Shane in a brutal Hell in a Cell cage match.

WrestleMania weekend is beginning to come into clearer focus with this announcement of The Undertaker headlining the 2022 Hall of Fame. The already confirmed title matches for the weekend include Roman Reigns vs Brock Lesnar in a title-versus-title match, Ronda Rousey against Charlotte Flair for the Smackdown-branded women’s championship, and RAW Women’s Champion Becky Lynch going against Bianca Belair. And with rumors buzzing about a possible one-night-only in-ring return by the Texas rattlesnake Stone Cold Steve Austin as well as rumors of former AEW vice-president Cody Rhodes signing with WWE, wrestling fans have a lot to be excited come April.
KEEP THE DALLAS OBSERVER FREE... Since we started the Dallas Observer, it has been defined as the free, independent voice of Dallas, and we'd like to keep it that way. With local media under siege, it's more important than ever for us to rally support behind funding our local journalism. You can help by participating in our "I Support" program, allowing us to keep offering readers access to our incisive coverage of local news, food and culture with no paywalls.
Make a one-time donation today for as little as $1.