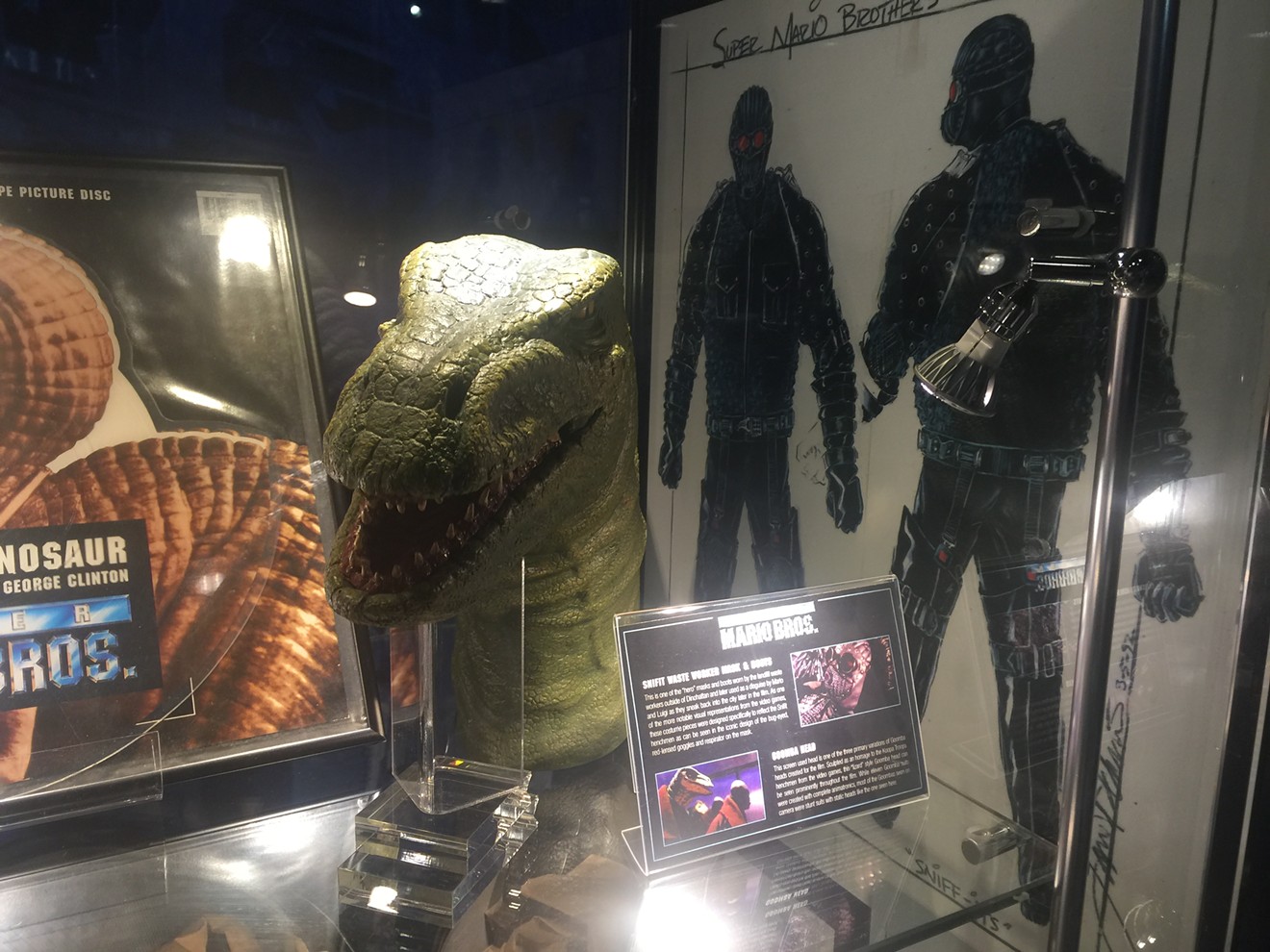 The National Videogame Museum in Frisco obtained a number of props used on the set of the 1993 film based on the Nintendo video game Super Mario Bros. such as this Goomba head for one of two new exhibits. Danny Gallagher
Where would the gaming world be without the advent of virtual reality technology and the 1993 film Super Mario Bros., the first mainstream film based on a video game? We definitely wouldn't have cool, futuristic headsets like the Oculus Rift and PlayStation VR, and video game movies would be worse if Super Mario Bros. hadn't set the bar so low no matter how hard director Uwe Boll has tried (BloodRayne, Far Cry, Postal).

The National Videogame Museum in Frisco unveiled two new wings of their massive collection that pay homage and chronicle the history of virtual reality and Super Mario Bros., complete with some very rare artifacts and interactive exhibits.

John Hardie and Sean Kelly, two of the founders along with Joe Santulli, say the exhibits contain items from their massive video game collection and donors who loaned the items for display. The virtual reality exhibit is the more interactive of the two new exhibits, with working models of several VR display consoles and technology that guests can play such as the PlayStation VR, the 1980 arcade version of Atari's first-person tank shooter Battlezone and Nintendo's infamous Virtual Boy, a goggled game console released in 1995 that became one of the company's biggest commercial failures. Ashley Wolff of Plano plays Virtual Boy Wario Land on Nintendo's Virtual Boy console at the National Videogame Museum in Frisco in their new exhibit on virtual reality technology.
Danny Gallagher
"It's a big thing these days," Hardie says about VR gaming. "Everyone's getting into it and everywhere you look, there's some kind of VR."

The history of the gaming industry's exploration of virtual gaming, however, goes back much further than the Virtual Boy. Kelly says it took a long time for game engineers and creators to create technology small and affordable enough to be sold on the mainstream market with playable games.

"VR's the newest big thing, but it's been around a long time," he says. "They've been trying to get it right for 30 years and what we have works pretty well but it's not perfect."

One of the earliest attempts to produce VR-style technology for home gamers came from Atari in 1984 with its Mindlink System. There are only two Mindlink prototypes in existence, Santulli said during a tour of the museum before its grand opening in 2016.

"It was supposed to read brainwaves to control the game," Kelly says. "Of course, it didn't work but they spent so much money developing it and didn't realize it didn't work. So they scrapped it after spending all that money."

The VR exhibit also includes some artifacts that gamers from the '80s and '90s might be more familiar with, such as the Power Glove, Mattel's gloved controller released in 1985 for the Nintendo Entertainment System. Mattel claimed the Power Glove could let players control just about any game using the movement of their hands, but the controls were very problematic and often imprecise to the players' movements. The museum's collection not only includes an original Power Glove but also a rare prototype developed by VPL Research that Hardie says he obtained "from a friend, that we just got in the mail."

Just across from the VR exhibit, the museum's new Super Mario Bros. showcases an impressive collection of props and costumes from the 1993 film starring Bob Hoskins and John Leguizamo. The two played Brooklyn's most famous plumbers Mario and Luigi, who cross over to an interdimensional, industrial hellscape where people evolved from dinosaurs, the populace is under the thumb of the evil King Koopa played by Dennis Hopper, and a mystic shard of a meteorite grants powers to whoever possesses it. The film was panned by critics and gamer audiences, who didn't like its loose interpretation of the game. Universal Pictures is working on a proper film adaptation of the Super Mario Bros. universe with Nintendo, Illumination Entertainment and the game's creator, Shigeru Miyamoto, according to a report from IGN.


The props and costumes are on loan to the museum from film collector and archivist Blake Dumesnil. According to a placard accompanying the exhibit, Dumesnil says he first saw the film artifacts when he was 9 years old during a visit to the Disney-MGM Studios theme park in Orlando, Florida. The Super Mario Bros. film had just been released in theaters to very low acclaim. Dumesnil says the movie "was anything but the colorful, fantastical world of Super Mario Bros. as we knew it."

"Audiences found themselves thrown into a dark, gritty, dystopian world with subtle references to the games and characters sprinkled throughout a convoluted plot about dinosaur evolution," Dumesnil's placard reads. "It was a bizarre film — and I loved every minute of it."

Dumesnil started tracking down props and costumes from the film to preserve them for gaming history. The exhibit includes such items as two pairs of Thwomp Stomper Boots that help the film characters jump as high as the Mario Brothers do in the video game, a "Bullet Bill" bullet, a latex Goomba head, the fabled meteorite piece, several of the Mario Brothers' plumbing tools and a dress worn by actress Samantha Mathis, who played Princess Daisy in the film.

"I sat down two nights ago and put the movie in and I only got about 10 minutes into it," Kelly says with a laugh. "It's bad but it still ties in with video games, because it's the first video game movie and that's kind of cool." 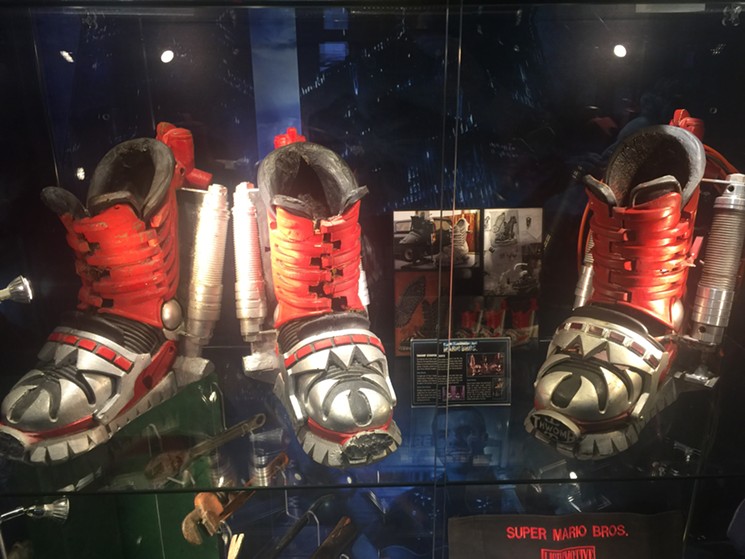 Film archivist and collector Blake Dumesnil loaned several props from the 1993 film Super Mario Bros. to the National Videogame Museum, including the Thwomp Stomper Boots worn by members of the film's cast.
Danny Gallagher
KEEP THE DALLAS OBSERVER FREE... Since we started the Dallas Observer, it has been defined as the free, independent voice of Dallas, and we'd like to keep it that way. With local media under siege, it's more important than ever for us to rally support behind funding our local journalism. You can help by participating in our "I Support" program, allowing us to keep offering readers access to our incisive coverage of local news, food and culture with no paywalls.
Make a one-time donation today for as little as $1.