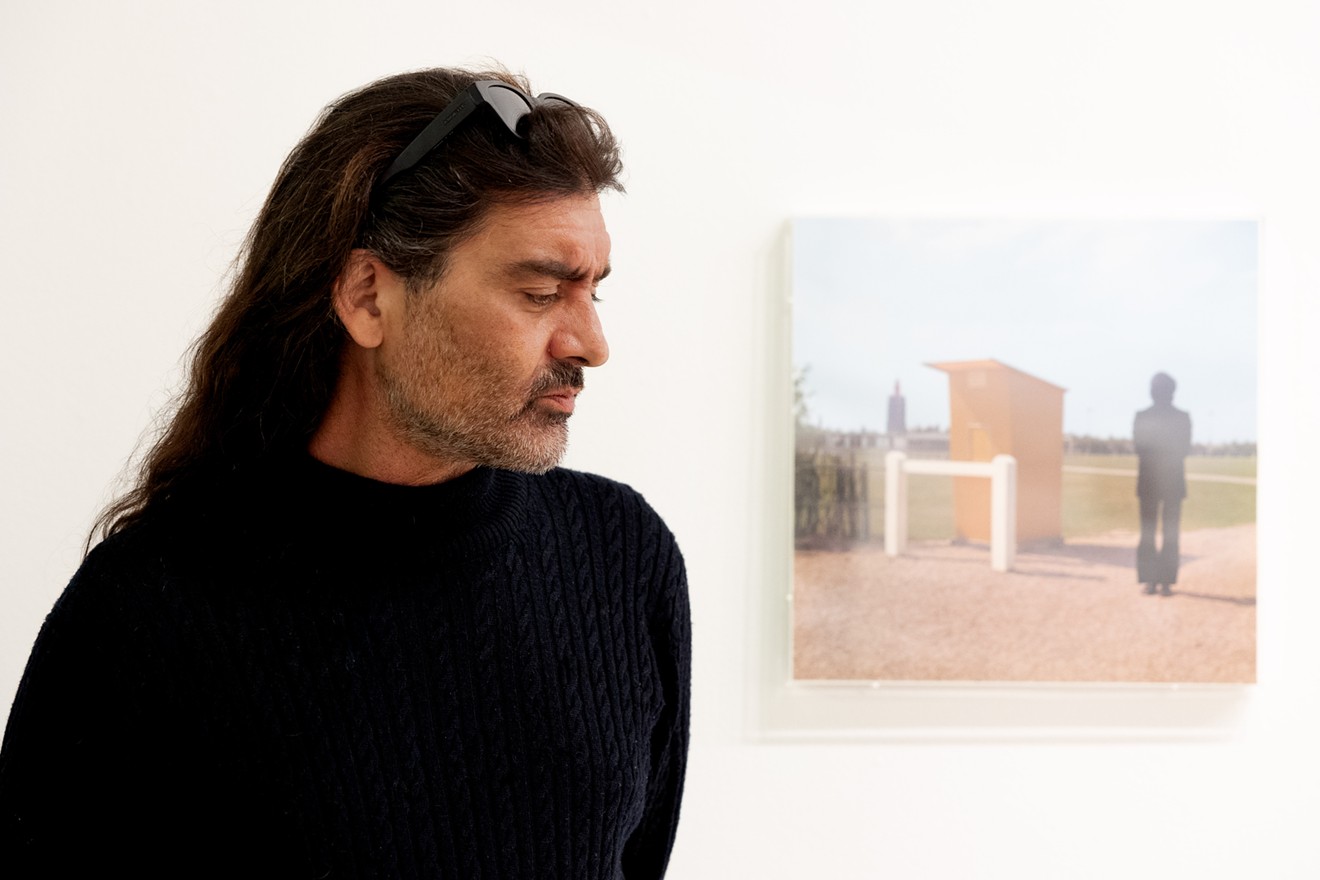 David Quadrini Andrew Sherman
David Quadrini is a hard man to pin down. The gallerist, curator and artist has spent the past few months carefully choosing pieces for a truly remarkable show at the new gallery Meliksetian Briggs in Dallas, showcasing the works of critically acclaimed Dutch artist Bas Jan Ader.

The show, opening on Saturday, Jan. 14, is the first Dallas exhibition Quadrini has curated in six years and it shows how far both he and the Dallas art world have come over the past few decades.

Originally from New York, Quadrini moved to Texas as a child after his father took a job at Texas Instruments, where he worked for more than 20 years. Doing all he could to get kicked out of Jesuit College Prep as a teenager after not being able to attend Booker T. Washington HIgh School for the Performing and Visual Arts, Quadrini happily found his way to art school, enrolling in the prestigious Rhode Island School of Design. After completing three semesters studying art at RISD, Quadrini bounced around to several schools before finishing his degree at the University of North Texas in 1992. He worked jobs at Neiman Marcus, Whole Foods and even MTV designing sets before going on to found Angstrom Gallery, ushering in a new era of Dallas art, and redefining what it meant to be both an artist and an art curator.

“I was very lucky when we started Angstrom Gallery. We were really a non-gallery, but our main hope was to get our artists to be able to quit their jobs. When picking artists for shows I was always thinking, ‘I wish I had made that’ and that’s when I signed them up right away,” Quadrini says about his artists.

Angstrom Gallery ran from 1996 to 2012 with several pauses from 2006 onwards as Quadrini relocated to Los Angeles to run another space and work as a special projects curator. Angstrom openings were a mix of both high- and low-brow culture, as posh East Coast art critics could be seen mingling with Deep Ellum musicians attending art shows for the free beer. "Art is the thing that keeps the human race OK," says David Quadrini, who is curating the inaugural exhibition at the new Meliksetian-Briggs gallery in Dallas.
Andrew Sherman
Quadrini had a great relationship with some of the best musicians in Dallas and even contributed the cover art for Denton band Brutal Juice’s major label debut, Mutilation Makes Identification Difficult (Interscope). On another occasion, the late Austin-based musician, artist and friend of Quadrini’s, Daniel Johnston, accidentally asked Quadrini’s mom for a joint at an art opening. Angstrom was a freewheeling creative scene where important contemporary artists such as Ludwig Schwarz, Mark Flood, Erick Swenson and Ryan Trecartin all contributed their work to mint the space’s legendary status. But after stellar and consistent programing, in the end Quadrini saw himself as more of an artist and curator than an art dealer and closed Angstrom to a very disappointed Dallas crowd.

“I didn’t want to pretend that I had the personality type to monetize an artist’s work to be able to live off of it,” Quadrini says. "I never wanted to control the destiny of artists. I’m much happier talking to my artist friends and gallery friends and helping put the two together."

After shuttering his Dallas gallery, moving to Venice Beach and curating several West Coast shows, Quadrini was given more opportunities to work with some of the most famous artists and collectors alike. After a decade in Los Angeles, the artist was once again called back to Dallas.

"I personally have always found his work to be the convergence of two things, absurdity and poignancy.” - David Quadrini on the art of Bas Jan Ader

Six months ago, Quadrini received a call from Anna Meliksetian of the Los Angeles-based gallery Meliksetian-Briggs with exciting news. The gallery was opening a second location in Dallas (150 Manufacturing St., No. 214) and wanted Quadrini to curate its inaugural exhibition. The exhibition would showcase works by the famous contemporary Dutch artist Bas Jan Ader, including some never seen before, as Meliksetian-Briggs represented the late artist’s estate.

“We wanted David because he’s an artist and we really wanted to show this work from an artist’s perspective,” says Michael Briggs of Meliksetian-Briggs.

It was perfect timing for Quadrini, as he had already hoped to one day have an opportunity to curate an Ader show. The show ultimately shaped into a retrospective.

“The show is a mini retrospective and takes from his entire body of work, back to some of his very first shows,” Quadrini says.

The story of Bas Jan Ader is a peculiar one. In July 1975, the Dutch artist took to the sea in an attempt to cross the North Atlantic Ocean in a 13-foot pocket cruiser named Ocean Wave. The artist’s journey was the second part of a three-part project titled In Search of the Miraculous. He was due to arrive in England three months after his departure, but nine months later Ader’s boat was found unmanned just off the coast of Ireland.

Ader’s work is considered revolutionary in the realm of conceptual art. He was heavily influenced by existential philosophers, Dutch artists and the works of Marcel Duchamp. His most famous piece, "I’m too sad to tell you," consists of a 3-minute black-and-white film of the artist crying, several photographs and a post card mailed to his friends with the inscription "I'm too sad to tell you."  It’s a potent piece of work and widely considered a major achievement in postmodern Californian conceptual art.

“It’s three minutes of crying, and it feels like it’s an hour. It’s definitely in a time when men didn’t cry, when men weren’t celebrated for displaying those kinds of feelings. He was very much interested in creating a new art form,” Quadrini says.

Ader bounced around different art schools before immigrating to the United States and graduating from Otis College of Art and Design with a BFA in 1965. He met his wife, Mary Sue Ader-Andersen, while in school, and after marrying settled into a quiet life in California teaching and creating.

Ader’s parents were Dutch ministers who lived through World War II. His father was executed by Nazis for hiding Jewish refugees just 10 miles from the German border when Ader was a child. This event greatly affected Ader’s work and fueled his obsession with gravity, falling, existentialism and the absurd.

In the mid-'60s, Ader made several famous pieces consisting of films depicting himself falling off and into different objects including a roof, from a bicycle into a canal and from a tree into a muddy stream. His obsession with both gravity and a point at which one experiences a loss of control both excited and dumbfounded viewers.

“In my opinion, his falling videos were a meditation on failing or getting hurt. I personally have always found his work to be the convergence of two things, absurdity and poignancy,” Quadrini says.

Another of Ader’s important  installation pieces, "Thoughts unsaid, then forgotten" (1973), has never been properly shown until the upcoming Dallas opening. With direct access the artist’s estate, notes and specific instructions, Quadrini says the piece will be properly shown.

“The most influential is 'Fall 1' and 'Fall 2,' then 'Thoughts unsaid, then forgotten'. We are all obsessed with this piece. It’s the center of the show and it’s never been installed correctly,” Quadrini says.

With more than 20 pieces including mixed media, photographs, paintings and art installations, Bas Jan Ader’s Dallas debut 48 years after his untimely death could be considered nothing but miraculous itself. By showing such a rare and prestigious body of work paired with one of Dallas' most beloved contemporary art curator/tastemakers at the helm, Meliksetian Briggs is making quite a statement for its Dallas debut, once again proving that Dallas is fertile and fit for world-class art.

For Quadrini, it’s another feather in his personal headdress of accomplishments before moving full steam ahead on the environmental project he and his late father, David Quadrini Sr., had been working on before his father's passing in August 2022. For his next project, Quadrini received a patent on an idea to clean and replenish the world’s polluted waters.

“Our goal since 2017 is intended to refill Lake Mead forever. We’re going to do this crazy sculpture in the desert that can make as much fresh water as we want. Right now is the moment for it and that’s going to be the most useful thing I ever do,” Quadrini says.

If anyone has the energy, luck and persistence to do so, it’s David Quadrini. His views on art and artists also haven’t waned in the meantime.

“My position is that I love all artists. I love the artist personality and the artist mindset, and do believe that art is the thing that keeps the human race OK,” Quadrini says.
KEEP THE DALLAS OBSERVER FREE... Since we started the Dallas Observer, it has been defined as the free, independent voice of Dallas, and we'd like to keep it that way. With local media under siege, it's more important than ever for us to rally support behind funding our local journalism. You can help by participating in our "I Support" program, allowing us to keep offering readers access to our incisive coverage of local news, food and culture with no paywalls.
Make a one-time donation today for as little as $1.