Stevie Witkowicz, left, plays Ronnie and Rhonda Durant, right, plays Danny in The Roof, a loving, satirical tribute to Tommy Wiseau's infamous cult film The Room that's a disaster movie in the other sense of the term. Danny Gallagher
Films like Troll 2, Plan Nine from Outer Space and Birdemic: Shock and Terror have amassed global fanbases for their terribleness, but The Room has become by critical standards the Citizen Kane of "best worst movies."

The Room doesn't just aspire for greatness and fails. It falls so hard that the force of the thud busts through the inner core of the Earth. Science fiction and horror duds like Troll 2, Plan Nine and Birdemic fail in entertaining ways because half the deck is already stacked against them. They don't have access to anything above low-grade special effects, so the film has already drowned before the bad script and acting can help submerge it in a sea of mediocrity.

The Room is a romantic drama that doesn't have space aliens or flesh-eating monsters in the script, but it sinks even faster.

It's not just its unintended comedic style that makes it an epic cult classic among cult classics. It's a testament to the passion of artists who plow ahead with their vision in spite of their limited talent, knowledge, training, technical ability or total lack of dramatic instinct.

"I think what's different from The Room is they didn't have the money to make a good movie, and it's not some wildly absurd concept. Trolls 2 is absurd from the top down," actor Micah Henderson says. "The Room resembles a movie you would actually care about."

Pocket Sandwich Theatre's parody play of Wiseau's epic disaster The Roof is bad on purpose, and it's acquired an equally impressive cult following among the popular theater's late-night lineup because it doesn't just re-enact the film for fans who can recite it from memory. It makes its characters and scenes more self-aware of the madness and confusion swirling around them. 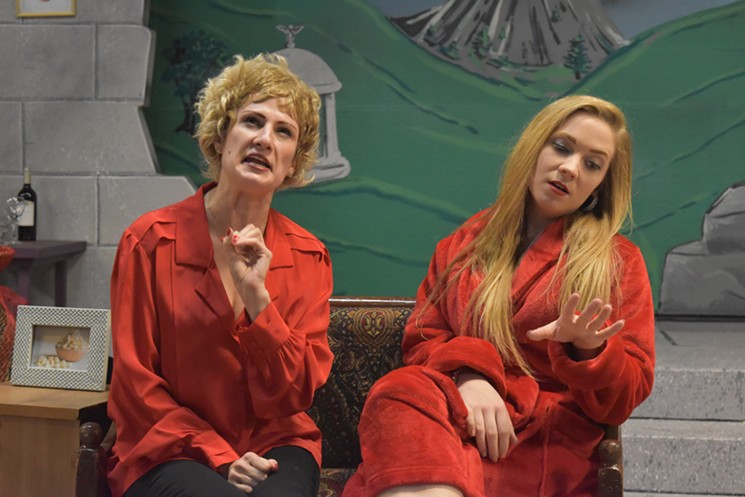 Trista Wyly, left, and Shay McDonald star in Pocket Sandwich Theatre's parody of The Room called The Roof, which premiered last year.
courtesy Pocket Sandwich Theatre
"How do you make a parody of something bad that it would inevitably become good?" says director Jared Seman. "When I was looking for adaptations, I found that colleges were doing it straight, and that's a recipe for disaster. We just throw everyone up on stage and point out the glaring issues like talking about [Claudia's] breast cancer that never comes back."

The Roof premiered last year around the same time as James Franco's film, The Disaster Artist, which tells the story behind The Room's making. The play became its own cult hit among Pocket Sandwich's theatergoers, who sold out several performances and made it the most popular late-night show at the venue. The show returns for a second run starting Friday, Feb. 1, with six shows to accommodate its massive fan following.

"When we first launched it last year, The Disaster Artist was coming out and the response was amazing," says actor Stevie Witkowicz, who plays Ronnie (not Donnie). "It's a crazy feeling to purposely do a bad show."

Henderson credits the show's creation to producer Jeny Siddall, after they saw a midnight screening of Wiseau's film on the big screen. Seman started putting together a script based on his and the audience's observations of the film's biggest flaws and foibles along with some of The Roof's most memorable moments like Lisa's bizarre neck bulge, the high-pitched chirping instead of just calling someone "chicken" and Wiseau's ear-bursting cry, "You're tearing me apart, Lisa!"

"It's a crazy feeling to purposely do a bad show." – Stevie Witkowicz


"There are so many of these things where I couldn't change them and after a while, I forgot," Seman says. "I thought I made some of them up."

The Roof tells a near similar story as The Room of a successful, unintelligible banker named "Ronnie" whose fiance "Lena" gets bored with their romance and decides to seduce his best friend "Mack." The other characters who either try to expose, exploit or explain this lackluster love triangle venture in and out of scenes with plausible explanations or reasons and give over-the-top speeches that only create more problems and puzzling looks. The big difference is Seman's characters are more self-aware of their shenanigans except, of course, for Ronnie.

Most of the characters in the show play bigger personalities to their characters' film counterparts, which sounds like a low bar to clear, but acting on purpose is a challenge because it carries the comedy in ways other comedies don't.

"There's a difference between playing a bad actor and bad acting," says Shay McDonald, who plays Lena in the show. "It's the style of the melodrama. You lean into the bad acting really hard and that's what creates a lot of the funny in the show."

Witkowicz says portraying Wiseau's unaware character felt weird because of its cult pop culture status. Wiseau's undetermined foreign accent and unexplained screaming become an impression that everyone thinks they can do. So he says, "It felt weird stepping into these shows because he's such an iconic character."

"Almost all of Stevie's performances comes from the movie," Seman says. "He's the straight man carrying the movie onstage, and everyone else is just responding to what he puts on the stage. The biggest challenge of it is because every single scene of the movie has something iconic or truly weird we couldn't miss. You don't straighten the eyes on a Picasso." 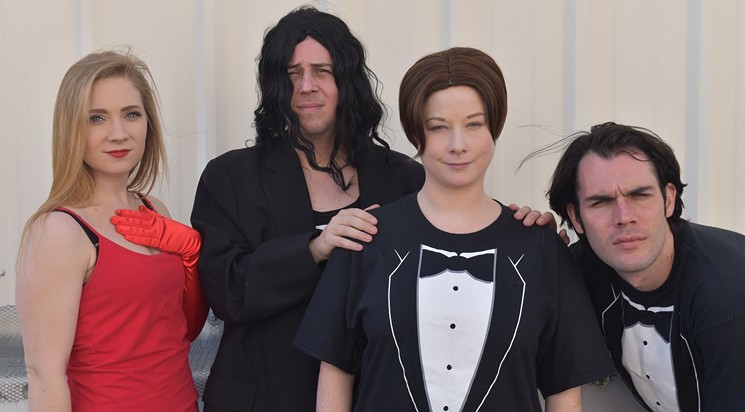 (From left) Shay McDonald, Stevie Witkowicz, Rhonda Durant and Micah Henderson return to their Room-esque roles in Pocket Sandwich Theatre's second late night run of The Roof that starts Friday, Feb. 1.
courtesy Pocket Sandwich Theatre
KEEP THE DALLAS OBSERVER FREE... Since we started the Dallas Observer, it has been defined as the free, independent voice of Dallas, and we'd like to keep it that way. With local media under siege, it's more important than ever for us to rally support behind funding our local journalism. You can help by participating in our "I Support" program, allowing us to keep offering readers access to our incisive coverage of local news, food and culture with no paywalls.
Make a one-time donation today for as little as $1.