Road Trip to Big Bend: Is it Worth the 8-Hour Drive from Dallas? 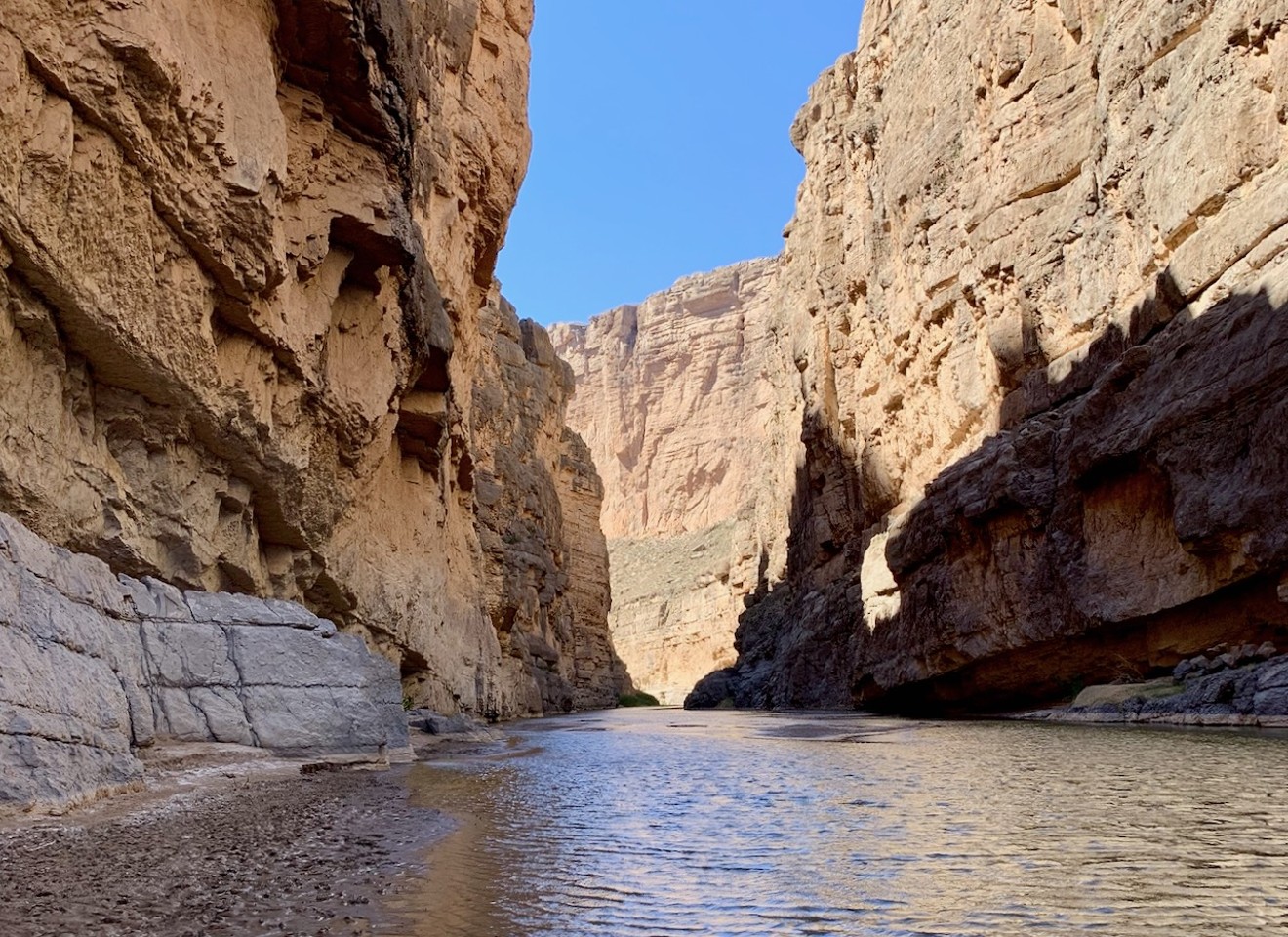 Inside Santa Elena Canyon, which is about a mile walk down an easy trail. Mexico is on the left, the U.S. is on the right. Lauren Drewes Daniels
Eight hours in a car is a long time. Especially for people who live in a city where just running an errand can take an hour. A 45-minute commute is sadly kind of common. So planning a vacation that starts with an eight-hour car ride will be met with a big fat sigh and no-thanks smile from your family. It's especially daunting when Love Field is an easy conduit to any number of beachside resorts with a swim-up bar, in about half that time.

But none of those places are the wild, mysterious and hauntingly beautiful land of Big Bend National Park, which sits right here in your very own WAY-back backyard. The contrast of the Chihuahuan Desert and the stunning Chisos Mountains all carved by lava and ice and ocean is bizarre and stunning. The park itself is pristine. Packs of javelinas trot around and coyotes yip at night. The stars outnumber the people there 10 quadrillion to one. The isolation is refreshing.

So, short answer: Yes, Big Bend is worth the drive. After a couple of trips here are some tricks to doing it well.

Take off the night before. Sweetwater is just west of Abilene, about a three-and-a-half-hour drive from DFW. It’s a good stopping point with pretty cheap (and clean) hotel rooms, plus the free hot breakfast at the La Quinta is legit. So, plan on leaving around 6 or 7 p.m. the night before your real vacation begins, paving the way for a more manageable four(ish)-hour drive the next day, which means you'll be pulling into Terlingua around noon, giving you plenty of time to explore that day.

After you blissfully get past Midland and Odessa you'll dive south and the landscape quickly changes. It's nothing but fields with oil and gas equipment poking out of the land. White trailers and trucks are the only inhabitants, and they're either pumping oil or meth or both. 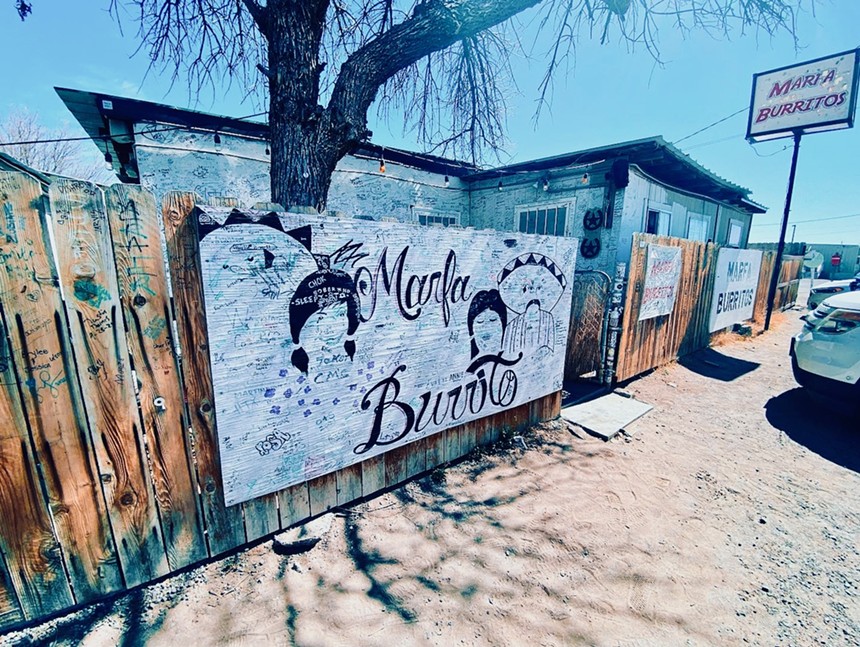 The menu is simple; four burritos are on offer. They're made fresh and then you can write all over the walls.
Lauren Drewes Daniels
If you feel like checking out Marfa, hold through for lunch at Marfa Burrito, a very casual local spot (cash only). If you’re a fan of Schitt’s Creek, you’ll love this funny little town; there’s even an apothecary. Wrong Marfa is a boutique of mid-century tchotchkes, curated jewelry, art, books and $400 charcuterie boards. Esperanza Vintage and Art is a resale shop that's a bit flamboyant. If you're there in the evening, check out the restaurant at the historic Hotel Paisano.

After all that, the drive from Alpine Texas to Terlingua, which is a tiny town on the west side of the park, is one of the most beautiful drives I’ve ever been on. There’s one point where you’ll descend into the desert floor and it literally has a steady stream of dirt devils skimming the land. There will be a lot of "Wow, look at that, take a picture," on this portion of the drive.

What you decide to do once you hit Big Bend is a toy box of options. You can drive for three days and still not see it all. You can hike trails in the desert or mountains, or take a canoe down the Rio Grande with a guide as Anthony Bourdain did (he also ate at Marfa Burrito). But the highlight tour includes a one-mile hike down the Santa Elena Canyon. Do this. Walls of limestone soar 1,500 feet above a sliver of the Rio Grande. It’s magnificent. (See photo at top.) If the river is running low enough you can wade over to Mexico. 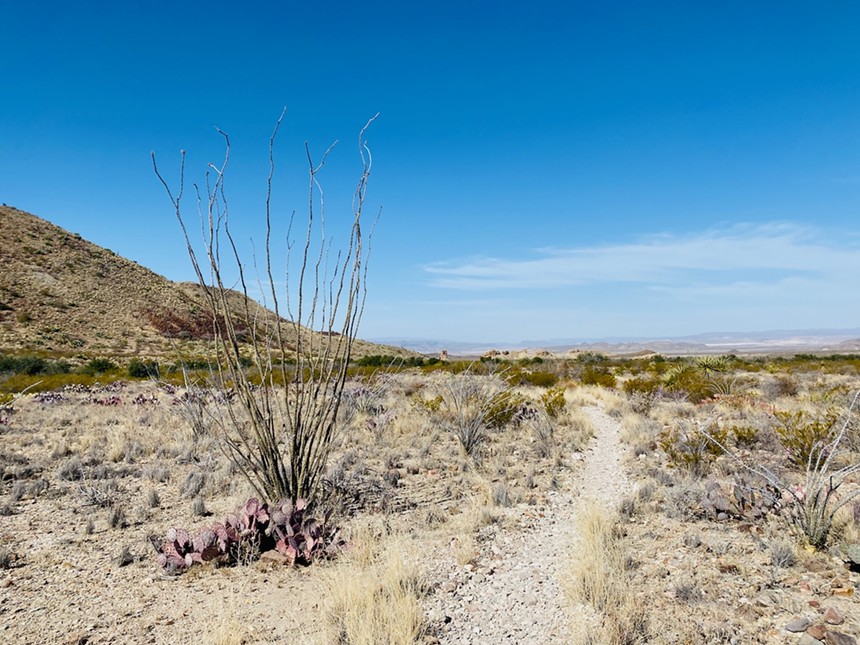 The Chimney Top Trails is about 3 miles out in the desert grasslands to a volcanic dike that stretches across the desert floor.
Lauren Drewes Daniels
We also hiked the Chimney Top Trails past some rolling hills that lead to sandstone rock formations carved by time and wind. From the chimney stacks, we could see Santa Elena Canyon and a whole bunch of beautiful nothing.

There's nothing high-level about a lot of these trails, just be smart. And you don't ever have to leave your car if you don't want to.

Big Bend National Park operates a border crossing to a tiny Mexican village called Boquillas. We’ve never been, but we met a couple from Indiana who had gone recently and loved it. You’ll need your passport to visit. They have small boats and ferry visitors across the river, then it's a short walk to the village where a park ranger told us the entire economy is based around visitors from Big Bend. Go hungry. And thirsty. It's the only place within an hour that serves beer.

For lodging in or around Big Bend, it depends on how far out you’re planning (spots book up months out) and your personal preferences. We planned late for one trip and stayed at the Desert Air Motel in Sanderson where the only place to eat was the gas station across the street. We got ramen noodles and popcorn for dinner and oddly loved it. This is just sort of how it's done out here — you make do with what you have and honestly it's sort of a relief. 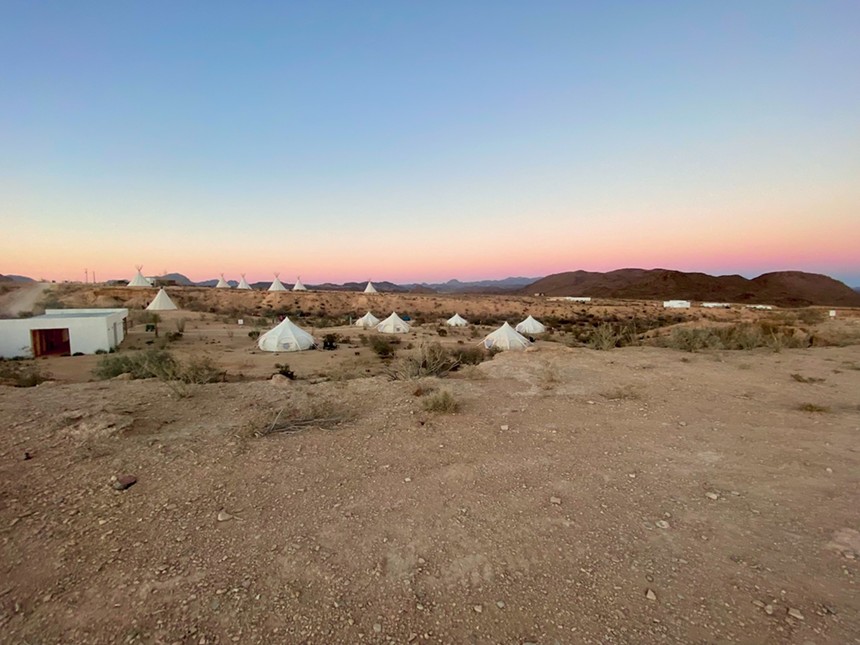 Basecamp Terlingua is sort of like glamping.
Lauren Drewes Daniels
Another time we stayed in a lotus tent at Basecamp Terlingua, which was cool, but we also weren't crazy about it because the tents are very close together and people (from Dallas) pile in two or three kids in with them, so what we thought was a quiet couples’ glamping retreat turned out to be a tent stay in the middle of a playground.

If you want to stay in the park, the lodges have an old-school Clark Griswald-trip vibe. Or camp in a tent if you're hardcore like that. Sleeping under the stars in Big Bend will likely be a night you'll never forget. You’re at the center of it all here. 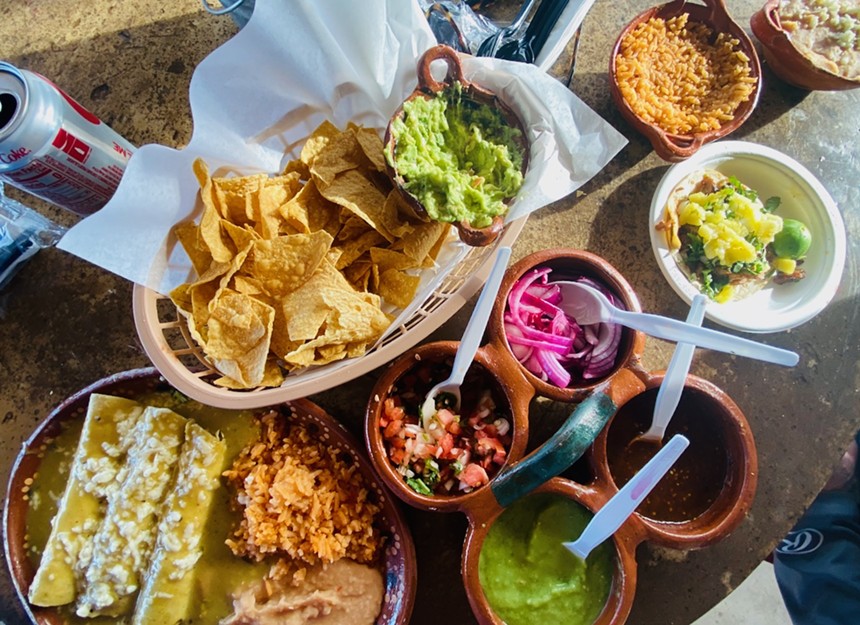 Enchiladas, tacos and guacamole from Taqueria el Milagro in Teralingua were perfect.
Lauren Drewes Daniels
Again, pickings are slim for meals. We tried to get into the Starlight Theatre in Terlingua one night, but they were packed so we went to Taqueria el Milagro and had some dang good enchiladas and guacamole. The gas station in Terlingua has a café and a nice staff who will help you find whatever else you may need. We packed two of their breakfast tacos for a hike one morning and they were great.

Oddly, the trip back never feels long or dreadful because at that point you’re so mesmerized by the constantly changing and immense landscape. It’s so desolate you’ll drive for hours and not see anyone. Except for a state trooper, who will pull you over for doing 81 in a 75. Also a border patrol officer will soon pull up behind him along with another unmarked forest green truck with tinted windows. (Three trucks for six miles over the speed limit is a little weird. But the trooper was nice, checked our license and insurance then let us go with a warning.)

To break up the trip back, book one night in the Indian Lodge at Fort Davis, as seen here in the distance from a look-out point.
Lauren Drewes Daniels
Our last night in the desert southwest we went up to Fort Davis and stayed one night in the rustic Indian Lodges in the Davis Mountains. There's more hiking to be done here, and people who are good planners should book a spot at a star party at the McDonald Observatory. Here, reservations book months out. We'd had a long day so just headed into town for more dang good enchiladas and OK wine (BYOB) at Cueva de Leon. 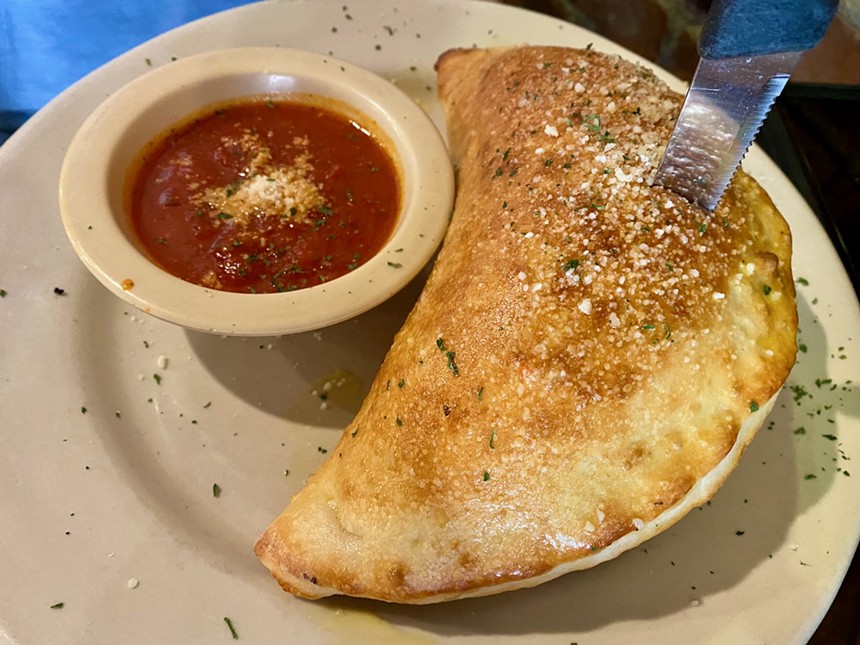 A stromboli worth its own trip.
Lauren Drewes Daniels
It's highly recommended for your trip back to avoid going back through Midland and Odessa again. Instead hit Interstate 10 and set your Waze to Brady, Texas. Brady is the geographical center of Texas. Stop for lunch at a restaurant on the square called Joe’s Italian Restaurant and order the stromboli. So, what does Brady know about Italian food? A lot it turns out. Like an amazing amount. This honestly was the best stromboli we've ever had and the bread rolls and a plate of chicken Murphy were equally as good. Literally maybe good enough for its own trip.

We rolled back into southwest Fort Worth at the same time President Joe Biden did last week, his motorcade creating an absolute traffic nightmare. The last 20 miles of the trip were almost comical. A guy was so mad about the traffic he literally got out of his car, slammed his door as hard as he could then got back in his car. We all need to get out of town every now and then. Maybe leave tonight.
KEEP THE DALLAS OBSERVER FREE... Since we started the Dallas Observer, it has been defined as the free, independent voice of Dallas, and we'd like to keep it that way. With local media under siege, it's more important than ever for us to rally support behind funding our local journalism. You can help by participating in our "I Support" program, allowing us to keep offering readers access to our incisive coverage of local news, food and culture with no paywalls.
Make a one-time donation today for as little as $1.