The Best (and Worst) Fictional Lawyers 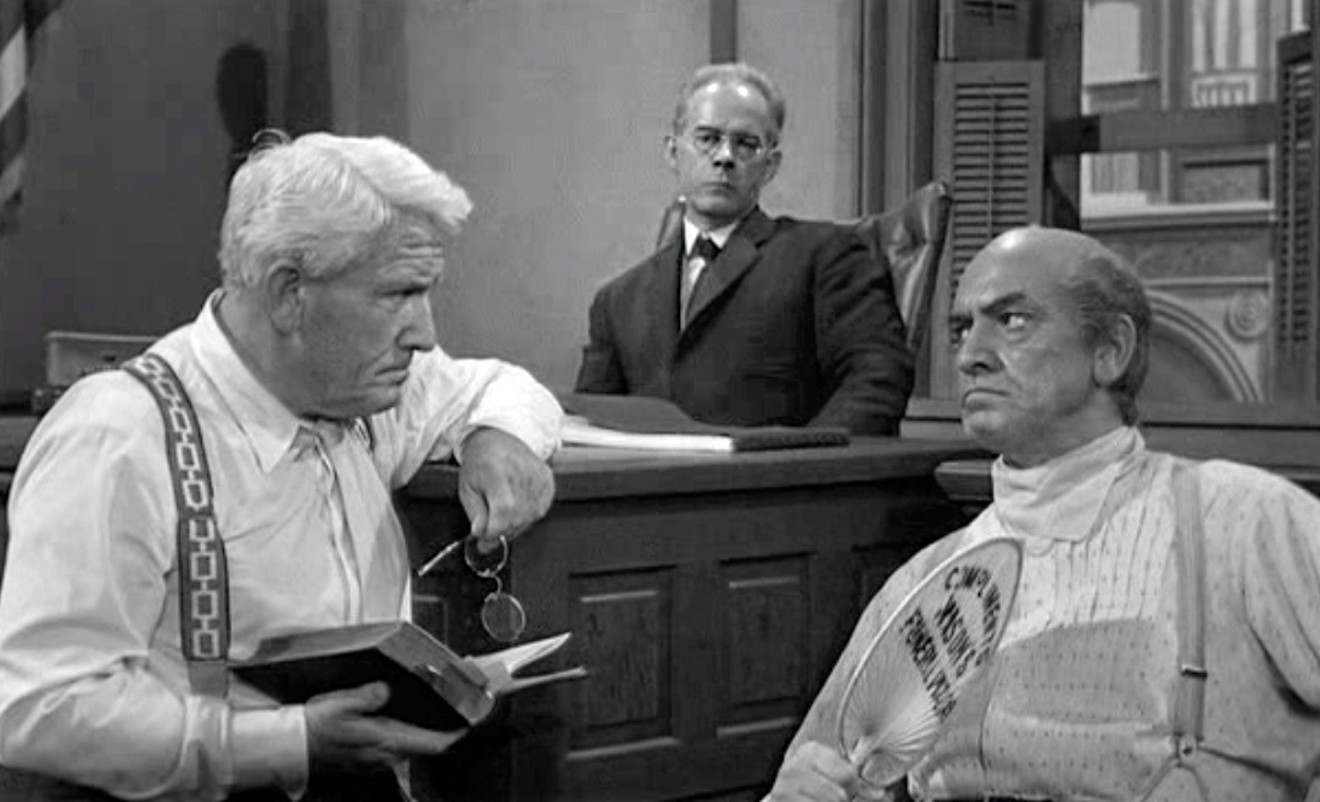 We'll take Spencer Tracy; Frederick March not so much (from Inherit the Wind). Metro Goldwyn Mayer
In the early 21st century, psychologists began to identify the “CSI effect,” in which people’s perception of law enforcement protocol became largely based on what they saw on network television programs. Of course, there are a fair number of discrepancies between television and reality; real-life criminal cases aren’t solved in 45 minutes like in a Law & Order episode, and there’s no FBI agent as good-looking as David Boreanaz on Bones.

Film has also colored the public's perception of justice, particularly when it comes to lawyers. Courtroom dramas have been popular since the early days of cinema, with films such as The Passion of Joan of Arc and Young Mr. Lincoln being some of the earliest examples. It’s safe to say that there’s a fair amount of dramatic license being taken when it comes to bringing these complex legal proceedings to screen.

Although many of the most popular courtroom films are the ones based on true stories, such as On the Basis of Sex, Marshall, Just Mercy or this year’s Trial of the Chicago 7, we also love the fictional lawyers based purely on filmmakers' imaginations. These film lawyers can be just as wholesomely good or cynically shrewd as the plot demands them to be.

In the realm of fictional lawyers, there are extremes on both ends: inspiring attorneys we’d happily hire, and the corrupt ones we wouldn’t trust to get us out of a parking ticket. Here’s our take on these famous movie lawyers.

Hired: Mickey Haller in The Lincoln Lawyer
Matthew McConaughey’s comeback started with his role as a whip-smart attorney who works out of the back of his car. Smart, connected and morally conscious, Haller is willing to defend a guilty client but makes sure they face the consequences for their actions.

Out of order: Rusty Sabich in Presumed Innocent
OK, we all love Harrison Ford, but shady prosecutor Rusty Sabich is too busy handling his own proceedings to focus on helping anyone else. Also, shouldn’t the city’s top criminal lawyer have suspected his wife all along?

Hired: Andy Beckett and Joe Miller in Philadelphia
Jonathan Demme’s 1993 masterpiece provides us with not one but two outstanding lawyers we would trust with our lives. There’s Andy Beckett (Tom Hanks), the young attorney who's fired from his law firm after they discover he has AIDS, and Joe Miller (Denzel Washington), Beckett’s initially bigoted rival who has a change of heart when Beckett hires him. Two lovely men who stand up for the voiceless.

Out of order: Kevin Lomax in The Devil’s Advocate
Yeah, we probably wouldn’t want to hire the guy that works for the LITERAL devil though we hear that in real life Keanu Reeves is extraordinarily nice.

Hired: Lt. Daniel Alastair Kaffee in A Few Good Men
“You can’t handle the truth!” Jack Nicholson spits at Tom Cruise’s character Daniel Kaffee in the most famous scene in A Few Good Men. It takes a good lawyer to get Nicholson riled up, and Kaffee is the type of idealistic do-gooder who isn’t afraid to hold those in power accountable.

Out of order: Nora Fanshaw and Jay Marotta in Marriage Story
Divorce can get pretty ugly, and the two divorce attorneys in last year’s Marriage Story are the type of aggressive, nasty lawyers who amplify the worst tendencies of both parties involved. Watching Laura Dern and Ray Liotta trade insults may be entertaining, but we wouldn’t want either of them handling any of our custody battles.

Hired: Rudy Baylor in The Rainmaker
John Grisham adaptations were quite popular in the '90s, with films such as A Time To Kill, The Pelican Brief, and The Client all turning into major blockbusters. Of all of the young Grisham protagonists, Matt Damon’s Rudy Baylor in The Rainmaker is by far the most wholesome and adorable. But Baylor isn’t just there to help old ladies cross the street — he’s also saving abused women, outsmarting wiretappers and bringing down a corrupt insurance company. Plus, he’s best friends with Danny DeVito, and that’s a quality all lawyers should have.

Out of order: Fletcher Reede in Liar Liar
So, uh, the superpower to only tell the truth maybe isn’t what you want from your lawyer. As fun as it is to watch Jim Carrey’s ruthless lawyer grow a heart of gold in this family favorite, we suspect that Carrey’s manic antics and aversion to lying would grow a little more tiring once he’s back in the courtroom.

Hired: Atticus Finch in To Kill A Mockingbird
There’s little that can be said about Gregory Peck’s performance that hasn’t been said before; the American Film Institute even named him the greatest movie hero of all time. The legendary character from Harper Lee’s novel is brought to life by Peck in a performance that embodies the greatest empathy and humility that screen characters can reach. There’s not a lot more hyperbole we can add, but we’d be lucky to have Atticus Finch defending us.

Out of order: Martin Vail in Primal Fear
Here’s another lawyer who is a little too clueless when it comes to his clients. It's clear early on that Martin Vail (Richard Gere) has no idea what to do when it becomes evident that his client, altar boy Aaron Stampler (Edward Norton), is a sociopath carrying murderous secrets. We’re going to leave Vail to piece that one together and take our business to someone else.

Hired: Fred Gailey in Miracle on 34th Street
This man definitively and empirically proved, in a court of law, that Santa Claus exists. That’s an impressive feat, and we think Gailey has it in him to help us out in more than one tricky situation.

Out of order: Michael Clayton in Michael Clayton
If we’re a shady lawyer caught in over our head with a simultaneous class action lawsuit and mental breakdown, we’d be lucky to have George Clooney’s handsome fixer on our case. Everyone else? Best not get involved with the corporate conspiracies and moral baggage that hiring Clayton would come with.
KEEP THE DALLAS OBSERVER FREE... Since we started the Dallas Observer, it has been defined as the free, independent voice of Dallas, and we'd like to keep it that way. With local media under siege, it's more important than ever for us to rally support behind funding our local journalism. You can help by participating in our "I Support" program, allowing us to keep offering readers access to our incisive coverage of local news, food and culture with no paywalls.
Make a one-time donation today for as little as $1.