I Wanna Be a Cowboy: Where To Go in Dallas-Fort Worth To Do Cowboy Stuff

Get ready to line dance. Like a cowboy. Melissa Hennings
It's inevitable and likely to happen to us all, and there’s very little any of us living in North Texas can do about it. Someone from out of town, probably from out of state, is going to come for a visit and they’re going to want do some cowboy stuff. Like, some Wild West, O.K. Corral stuff. Because in Texas, and especially here in Dallas-Fort Worth, we ride cows to work, only speak after we’ve spit a long stream of tobacco juice onto the ground and drink sarsaparilla from our Yeti water bottles.

Sure, they’ll also want to drive by the Sixth Floor in downtown Dallas, and we suppose there’s always a chance your visitors will want to swing south to Waco to worship at the base of Chip and Jo Jo’s silos. But you know it, we know it, everyone knows it — the question is going to come sooner or later: “So where does all the cowboy stuff happen?”

For those of us who grew up on the western side of DFW International Airport, such a question is one we’ve spent our entire lives answering. And we've learned about new places to include in our answers when the occasion called for it. On the surface, it’s fair to suggest that Fort Worth embraces its Western heritage more fervently than Dallas does, but there’s no doubt you can cover quite a bit of mileage to the east and west by seeking out the best cowboy shit DFW has to offer.

Dress Like a Cowboy or Cowgirl
311 N. Market St., No. 101, Dallas
It’s one thing to experience the rugged beauty and sepia-toned traditions of the Wild West, but if you don’t look the part, how fully are you or your guests really experiencing it? And if there’s a better-smelling store than a boot store, rich with leather scents wafting about, we don’t know about it. In a pinch, any Cavender’s or Boot Barn you find yourself closest too will suffice. Those big shops, full of boots, hats, belts, pearl snap shirts and everything else, are fine, of course. But for that extra bit of Lone Star flavor that can be found at only one Western clothing retailer, Wild Bill’s Western Store in Dallas is the place. The festive space is packed with not only the essentials, but plenty of tourist-ready, Tex-ified trinkets as well. And, hey, it’s just a couple-minute walk from the Sixth Floor Museum.
click to enlarge 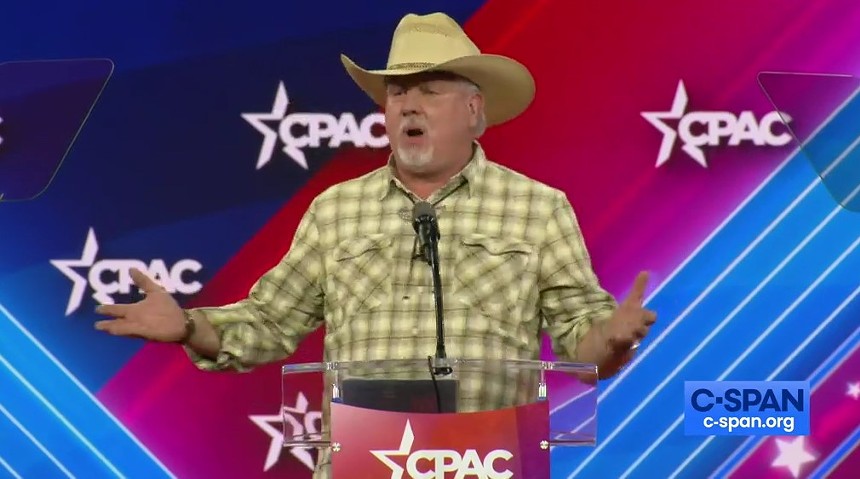 Dress like a real cowboy, not like Glenn Beck, who looked as authentic as Marty McFly in his cowboy costume, at a recent CPAC convention in Dallas.
Screenshot from C-SPAN
Go to a Rodeo
1818 Rodeo Drive, Mesquite
From June to August, catch real Western athletes at the legendary Mesquite Championship Rodeo. For over 70 years, the roughest, toughest cowboys and cowgirls have hit the dirt, spilled blood and soaked themselves in the applause of the thousands of fans who flock to every event in Mesquite. If you’re looking for some rodeo action outside of the summer months, the annual Fort Worth Stock Show and Rodeo is your best bet in January and February.

Ride Your Own Horse
4401 T W King Road, Southlake
What good is a cowboy without a trusty steed? Perhaps you’re the sort who would rather do the riding instead of watching others have all the fun. In Southlake anyone can become a cowboy during a trail ride at Marshall Creek Ranch. Hopeful wranglers can join a group ride for a 90-minute excursion, or book a private ride for just your group. And if it's time to pop the question to that special someone in a rustic, Western way, custom wedding proposals can be arranged here too.

Drive Cattle, Not Cars
131 E. Exchange Ave., Fort Worth
Just because something is touristy doesn’t necessarily mean that it’s lame. Besides, there’s a reason North Texas has a reputation as an Old West hub. It was, you know, actually the Old West, once upon a time. The Fort Worth Herd Cattle Drive, which takes place twice a day right down the middle of the historic Stockyards, is ideal for families with kids and for those visiting friends who want to see some real cowboy stuff up close without getting their own (probably new) boots too dirty.

Appreciate Cowgirl History
1720 Gendy St., Fort Worth
Since moving into its current gorgeous home in 2002, the National Cowgirl Museum and Hall of Fame has been a must-see spot on the cowboy stuff map of North Texas. It’s air-conditioned, so that’s a plus. Honoring women of the West such as Georgia O’Keeffe, Dale Evans, Sacagawea and even Supreme Court Justice Sandra Day O’Connor, this museum isn’t just about the rodeo life. A rotation of photography and art exhibitions also makes a visit worth looking into, even if you’ve been there before.
click to enlarge 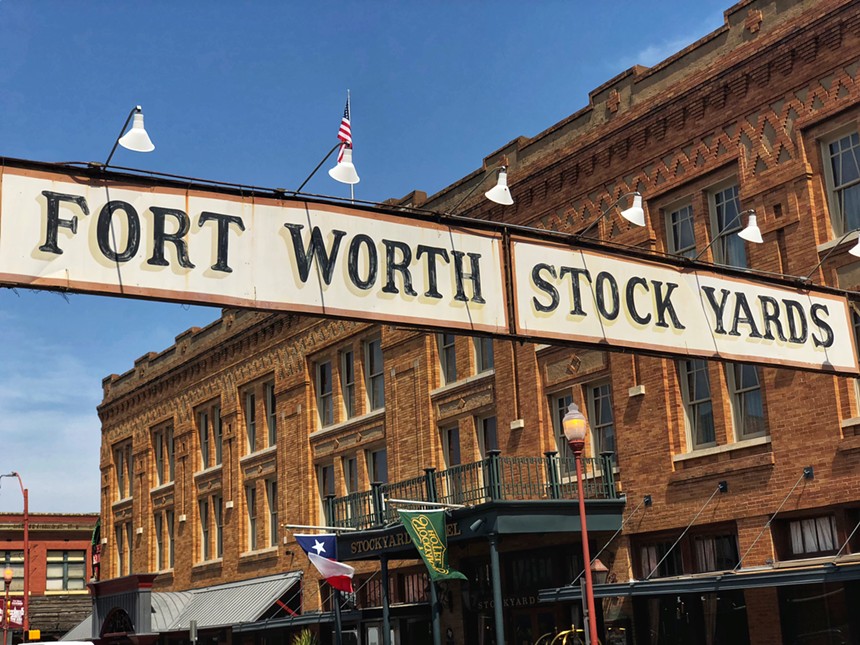 Take visitors to live their cowboy and cowgirl dreams at Cowtown's Stockyards.
chrisc39/WikiMediaCommons
Steak in the Stockyards
2458 N. Main Street, Fort Worth
It should surpise no one that the best place to eat like a cowboy, or more accurately, a cowboy who has just won a few extra bucks on the rodeo circuit, can be found in the Fort Worth Stockyards. Yes, cowboys love barbecue, and there are plenty of places to go for great 'cue around these parts. But you know what cowboys really like more than anything? A big meal with a massive hunk of prime steak. Cattleman’s Steakhouse has been a destination for Fort Worth residents of all types for many decades now. The name tells you what you need to know about the place, but the décor inside goes even deeper. It’s a blast-from-the-past time warp of the most Western kind.

Get Rowdy in a Honky-Tonk
121 W. Exchange Ave., Fort Worth
Of course, Billy Bob’s in the Stockyards is fun, and it’s big, and there’s bull riding and famous country-music stars doing their thing there every weekend. The Stagecoach Ballroom in Fort Worth or even Adair’s Saloon in Deep Ellum are also great options. But Lil' Red’s Longhorn Saloon around the corner from Billy Bob’s is as Country and Western as you can get, a gritty sort of down-home honky-tonk that can’t be prettied up the way larger, slicker joints are. Swinging live bands, couples who really know how to two-step and beer that’s as cold as it is cheap are what a cowboy really wants when it's time cut loose after dark. That’s what happens at Lil' Red’s.
KEEP THE DALLAS OBSERVER FREE... Since we started the Dallas Observer, it has been defined as the free, independent voice of Dallas, and we'd like to keep it that way. With local media under siege, it's more important than ever for us to rally support behind funding our local journalism. You can help by participating in our "I Support" program, allowing us to keep offering readers access to our incisive coverage of local news, food and culture with no paywalls.
Make a one-time donation today for as little as $1.
Kelly Dearmore