Street art icon Shepard Fairey is having a major exhibition in Dallas. Johnathan Zizzo
Shepard Fairey has built a reputation for challenging the establishment. From his early days as an outlaw street artist to his current role as a darling of the art world, he never shies away from the beauty and the dark undercurrent of American culture.

His 2008 “Hope” poster for then-Sen. Barack Obama made a moment of grassroots activism an iconic image for the ages. And his 2017 “We the People” series portraying Native Americans, African Americans, Muslims and Latina women ironically had Trump supporters at D.C.’s Women’s March lining up to take the posters home.

Emerging fully formed from the street art iconography of the late ‘80s, Fairey first got noticed for the wheat-pasted “Andre the Giant has a Posse” imagery when he was still a student at the Rhode Island School of Design. His work is in the permanent collections of MoMA, the Smithsonian and the Victoria and Albert Museum, and there are still remnants of his early punky attitude. It makes sense that both rapper Chuck D and Black Flag’s Henry Rollins flew to Dallas to hang with the artist at the Dallas Contemporary’s recent fundraising gala.
click to enlarge 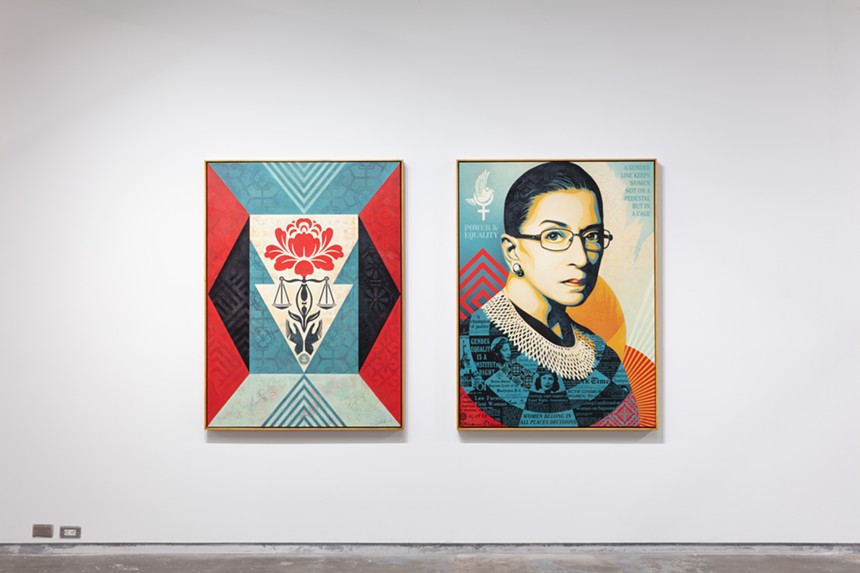 There are many recognizable figures among Fairey's works.
Kevin Todora

“[I’m inspired] by the DIY ethos of punk rock and skateboarding and then later hip-hop,” says Fairey of his work. “I’m not an appropriation artist like the way that some people say — I make my own illustrations. But I am influenced by that remix and sampling culture. The innovation of hip-hop, of taking other people’s raw materials and making something that feels brand new, fresh and exciting — that’s where I’m coming from.”

You’ll find that vibe in full effect at Backward Forward, on view at the Dallas Contemporary, 161 Glass St., through March 19. The show is a homecoming of sorts for the artist — his last entrée in the Dallas gallery was when he created a series of murals commissioned for the institution nearly a decade ago. And now he’s fully embraced inside its walls in a thought-provoking show curated by Pedro H. Alonzo. The latter has worked with the artist since his groundbreaking Boston Institute of Contemporary Art retrospective in 2009.

“It just felt like [street artists] weren’t part of the art world,” the curator recalls. “They were doing their own thing. I was very impressed with [Fairey’s] work. The thing that struck me the most was the defiance and the confrontational anti-establishment attitude and the intelligence behind it, and desire to help to confront the hierarchy of power to make the world a better place.”
click to enlarge

The art world has finally caught up with Fairey‘s imagery, which is evident in even a cursory view of Backward Forward. However, it’s up to the viewer to decide whether to pick up everything he’s putting down.

The artist addresses plenty of thought-provoking subject matter with his exhibition — the use of fossil fuels, climate change, gun control and social injustice are all present. Certain pieces are more confrontational, and others simple but equally powerful, such as a seemingly decorative work like a portrait of flowers with a subtle sticker that reads, “While supplies last.” Only a bronze sculpture of an AK-47 adorned with a single bloom hammers the point home in an obvious way.

“In a sort of more general sense, I always called my strategy the inside/outside strategy,” Fairey says of his approach. “Always have the mentality to work outside the system when the system is corrupted or hostile, but if I can infiltrate it and make it better on my own terms without being corrupted myself, I’m going to try and do that. Because, otherwise, you‘re just sitting there yelling from the margins saying, ‘Why do things suck so bad?’ I’m not going to do that because that’s not courageous.”

In the works since 2019, Backward Forward was delayed during the pandemic, but it gave Alonzo and Fairey more time to get conceptual. The curator shared books such as Yuval Noah Harari's Sapiens and 21 Lessons for the 21st Century with the artist, and Fairey had time and space to expand ideas throughout his teal, red, black and gold palate. Imagery from his smaller-scale pieces is reflected in the larger paintings, which complement the two giant murals he created onsite at the museum and the one on the street in Dallas’ East Quarter.

“What’s really important about his work is the repetition,” says Alonzo. “There are many images that are used repeatedly — you see certain flowers, you see certain faces and motifs and patterns running through the show, and that’s critical. Shepard is well aware people need to see an image at least seven times to remember it. And he wants you to remember it.”

Throughout each work, Fairey says there’s a fine line between charming and challenging the viewer.

As Fairey has evolved from what Alonzo calls his “young badass attitude” to a more seasoned approach, his technical mastery has grown as well.

“He went from a more confrontational approach to one of shared humanity and universal dignity,” says Alonzo. “He’s bringing people together in a very difficult time with all these divisive narratives with a message of hope and unity.” 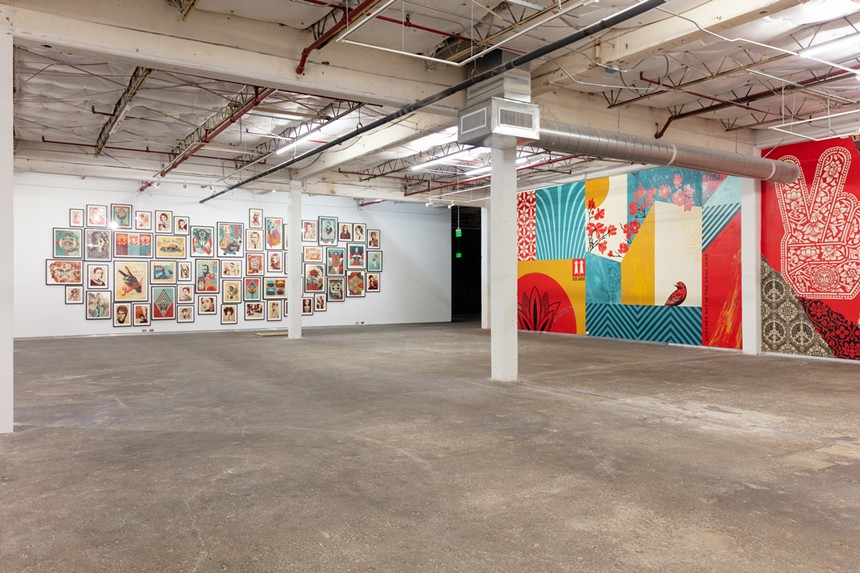 The Dallas Contemporary is having a Shepard Fairey exhibition again, 10 years after the last one.
Kevin Todora
click to enlarge 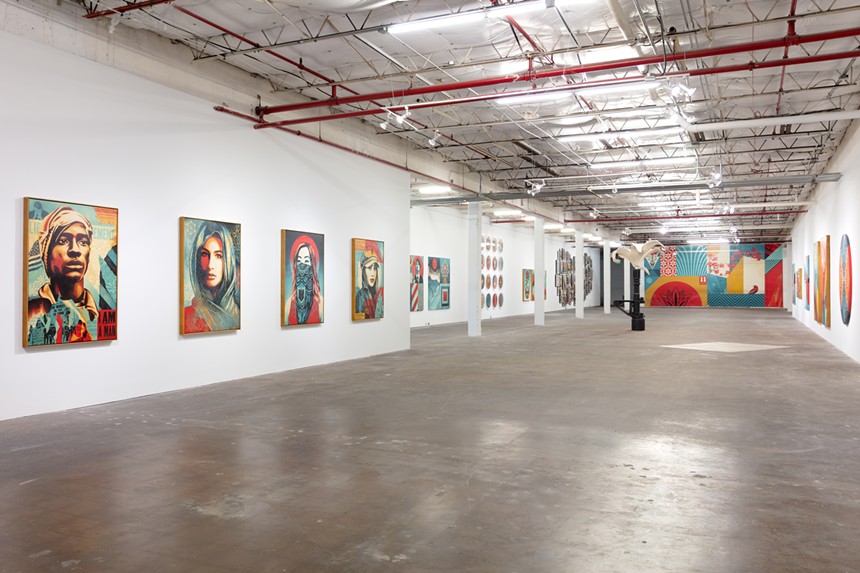 The street artist has been heavily involved with Dallas for a decade.
Kevin Todora
KEEP THE DALLAS OBSERVER FREE... Since we started the Dallas Observer, it has been defined as the free, independent voice of Dallas, and we'd like to keep it that way. With local media under siege, it's more important than ever for us to rally support behind funding our local journalism. You can help by participating in our "I Support" program, allowing us to keep offering readers access to our incisive coverage of local news, food and culture with no paywalls.
Make a one-time donation today for as little as $1.