Hot Girl Summer's Not Over: The Top Models from North Texas

It might just be easier to list the things supermodel Erin Wasson hasn’t done. Graham Denholm
Hot girl summer is drawing to a close, but that doesn’t mean we must stop admiring hot people. And in a city famed for its looks — from big hair and Neiman Marcus to Deep Ellum and punk — in a state with one of the highest numbers of plastic surgeons per capita, we’ve got plenty of hot people. Turns out, some of them become models, and some of those models move on to become movers and shakers around the world. So before the summer is truly over, let’s celebrate and admire some of the most successful models from North Texas (some boys allowed).

Chasity Samone
Oak Cliff native; seventh out of 11 children; Army veteran; Playmate of the Month (in February 2020): These are merely a few of the ways you could describe Chasity Samone, the Playboy model who plans to run for Dallas City Council. Her platform? Ending redlining and increasing access to higher education. Samone, who was born and raised in Oak Cliff and attended David W. Carter High School,  got into modeling after deciding not to reenlist in the Army. She modeled as a “Muse of the Week” for Playboy in 2016 and graced the centerfold of the magazine’s inaugural “Equality Issue.” She’s also starred in music videos for Lil Yachty and WizKid.
click to enlarge

Oak Cliff veteran and activist Chasity Samone gears up for a career in politics. But first, she's a proud Playboy playmate.
Brandon Hicks

Jerry Hall
Born in Gonzales and raised in Mesquite, a North Mesquite High School graduate and former Eastfield College student, Jerry Hall is Texas-bred through and through. She’s also a supermodel who’s graced the covers of Vogue and Cosmopolitan, gave birth to four of Mick Jagger's children (including models Lizzie and Georgia May Jagger), married Rupert Murdoch and served as a muse and model for Lucian Freud and Andy Warhol. In 2019, Harper’s Bazaar covered Hall's efforts alongside Paris Hilton, Reese Witherspoon and Alyssa Milano to help pass the Equal Rights Amendment. Her legacy is complicated and controversial enough to earn Salon columns even now. Through it all, Hall’s a Dallasite loud and proud.
click to enlarge 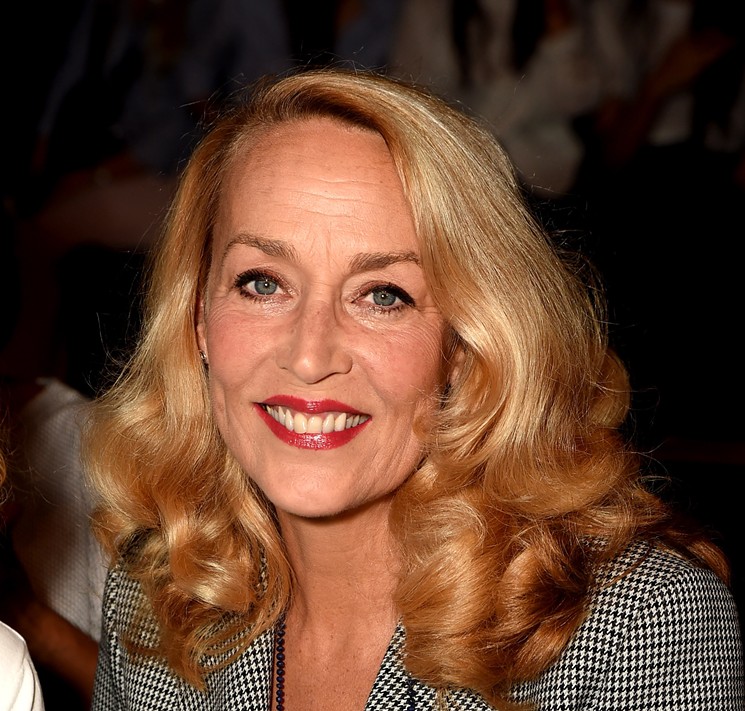 Jerry Hall was a powerhouse model who married some of the world's most powerful men. But she's also a Dallas gal.
Theo Wargo/Getty

Brooke Burns
Model, actress and game show host Brooke Burns is a multifaceted fashion model. According to CW33 and Wide Open Country, the Dallas native wanted to be a professional ballet dancer but started modeling after she tore a ligament in her leg while skiing. Burns starred in Baywatch and in films such as Shallow Hal, guest-starred in CSI: Miami and hosted the Emmy award-nominated game show The Chase, for which she was also nominated for an Emmy herself.
click to enlarge

TV host Brooke Burns got her start as a Dallas model.
Earl Gibson III/Getty
Angie Harmon
Another model slash actress slash Baywatch star, Highland Park High School graduate Angie Harmon began modeling at age 15 after winning a contest hosted by Seventeen and appearing on the cover of the magazine. According to CW33, Harmon — who has also appeared on the covers of Cosmopolitan, Elle and Esquire — was a runway model for Giorgio Armani and Calvin Klein. Harmon later played Jane Rizzoli on the show Rizzoli & Isles and Abbie Carmichael on the Emmy award-winning series Law & Order. She has three kids and is engaged to fellow model and actor Greg Vaughan.
click to enlarge

Angie Harmon got her start after winning a contest for Seventeen and went on to star on Emmy-winning TV.
Neilson Barnard/Getty

Greg Vaughan
Born James Gregory Vaughan Jr., in Dallas, according to IMDB, Vaughan was raised in North Texas and Fredericksburg and graduated from Mesquite High School in 1991. Before graduating, he began his modeling career after finishing as a finalist in a back-to-school modeling competition. After graduating, he went to Milan, Italy, where he worked with Banana Republic, Ralph Lauren, Tommy Hilfiger, Giorgio Armani and Versace. Vaughan has acted in Malibu Shores, Beverly Hills 90210, Baywatch and Days of Our Lives; for the latter performance, he won a Daytime Emmy award. He was named “One of the Sexiest Men Alive” by People magazine in 2002 and is engaged to Dallas model Angie Harmon.
click to enlarge 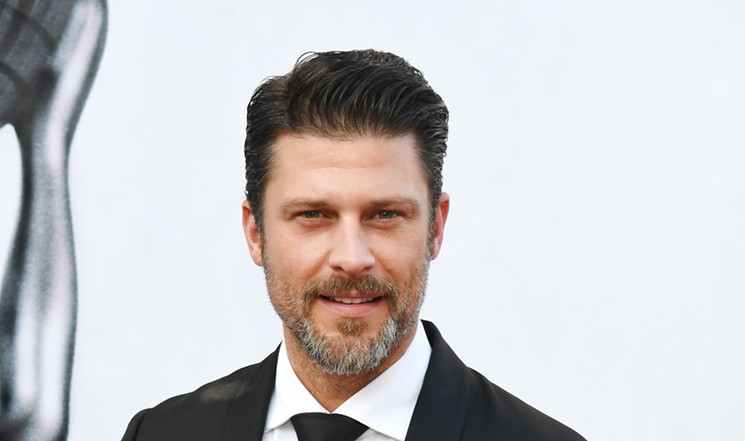 Greg Vaughan is a lucky man. He had successful modeling and acting careers and is engaged to fellow Dallas model Angie Harmon.
Paras Griffin/Getty

Chandra North
Famous for wearing a grass bikini in Sports Illustrated Swimsuit, Chandra North was born in Dallas and attended Southern Methodist University, where she was spotted and approached by a male model over summer break. After signing with the Kim Dawson Agency, North started modeling, moved to New York to audition for the New York City Ballet company, but instead continued modeling. According to Fashion Model Directory, North has appeared on the cover of Vogue, Elle, Marie Claire and Harper’s Bazaar, among many other magazines. She’s walked the runway for Chanel, Christian Dior, Dolce & Gabbana, Givenchy, Gucci, Hermès, Oscar de la Renta and Ralph Lauren, among other design giants. Queen of cool Vivienne Westwood even picked her as the face of her Boudoir fragrance.
click to enlarge

Chandra North is a '90s supermodel and we can't think of a higher title.
Vittorio Zunino Celotto/Getty
Le’Nard “Nardi” Meyers
Le’Nard Meyers is so much more than a model. A former wide receiver at Tarleton State University, where he graduated with a degree in business management and administration in 2015, hoped to become an NFL player. But with a microfracture and torn meniscus in his right knee, which failed to heal after surgery and rehab, he became an entrepreneur instead. He’s now a celebrity barber — which means he travels to clients instead of working in a barber shop — and the CEO of Energy Check, a designer clothing company. He also graces the runway for DFW’s best brands and has appeared in Zales commercials.
click to enlarge

Le’Nard “Nardi” Meyers is so much more than a model.
Crystal Chatmom Photography


Erin Wasson
Irving-born Erin Wasson is perhaps Dallas’ most interesting model. She lived in a Dallas artist collective helmed by sculptor, curator and tastemaker David Quadrini. She met her French restaurateur husband, Barth Tassy, at a gay bar in Venice, California. She won the Fashion!Dallas/Kim Dawson Model Search in 1997 and acted in Abraham Lincoln: Vampire Hunter in 2012. She is one of the highest-paid models in the industry and has said she is inspired by “homeless people and their style.” Wasson has worked with famed photographer Nan Goldin, appeared on the covers of Esquire, Vogue, Elle, Allure and Harper’s Bazaar, been the face of Michael Kors and designed boots for Texas-based luxury boot brand Lucchese.
click to enlarge 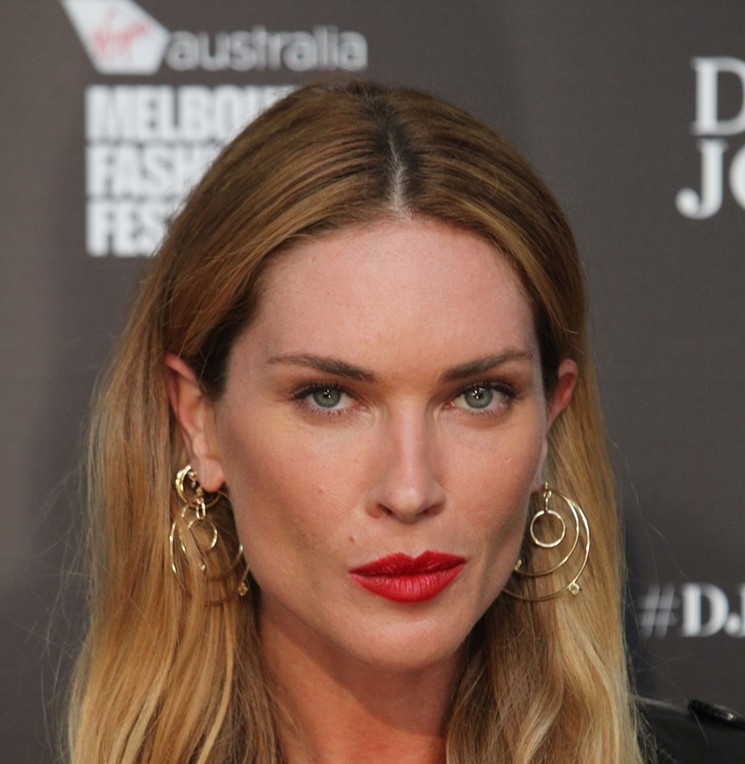 Kellie Stewart
Kellie Stewart’s modeling career began when she won Miss Texas Teen in 2014. The Fort Worth native went on to model for hair, makeup and dress companies before ending up at GUESS. She’s appeared in InStyle and Cosmopolitan and has also appeared on Fifth Avenue in New York, buses in London, and billboards in Los Angeles. She’s also been dubbed “GUESS’s Next ‘It’ Model.”
click to enlarge

Kellie Stewart is GUESS’s newest model.
courtesy GUESS?, Inc.
Roxy Lynece
A self-described “astral visionary” and “muse mama," Roxy Pryor — aka Roxy Lynece — is certainly a multi-talented fashion figure. Signed to One Management Los Angeles, she’s been modeling for more than eight years, gracing everything from tropical-inspired swimsuits to cowboy hats — as well as participating (almost) in America’s Next Top Model, making it almost to the top 14. Originally from Chicago but now based in Dallas, she’s also a professional photographer with a stunning portfolio. Lynece's self-portraits, especially, represent a provocative collision of model and photographer, two professions normally kept separate.

The stunning Roxy Lynece is as talented behind the camera as she is in front of it.
Karlo X. Ramos
KEEP THE DALLAS OBSERVER FREE... Since we started the Dallas Observer, it has been defined as the free, independent voice of Dallas, and we'd like to keep it that way. With local media under siege, it's more important than ever for us to rally support behind funding our local journalism. You can help by participating in our "I Support" program, allowing us to keep offering readers access to our incisive coverage of local news, food and culture with no paywalls.
Make a one-time donation today for as little as $1.