An artist's rendering of the Karen Awards, the annual recognition in the annoying and tiresome arts. Danny Gallagher
Most award shows are miserable because they're minefields for scrutiny. The hosts' entire history and social media posts are vetted. The results in each category are critiqued and thoroughly analyzed in a long list of subcategories. Will Smith is there.

They're just a mess, and they often mean little more than a chance to gain ratings in exchange for handing out paperweights and swag bags. The only instances in which similar money, time and dedication have been allocated to absolutely nothing include maybe football, cryptocurrency and the Cats movie.

That's why we've invented the Karen Awards. It's the only awards ceremony in today's culture in which you can make fun of everyone in every category for almost any reason, and the results are just as meaningless as the Oscars or the ESPYs, but also inscrutable. For instance, this year's top Karen is a white guy. How do you start a protest over that? You can't unless you're, you know, Kanye.

The Karens are a recognition of the best (or, rather, the worst) in the arts of interfering and escalating. The best part is that they don't even get an award. They just get the title they deserve for making life around them a little bit worse through their entitlement. 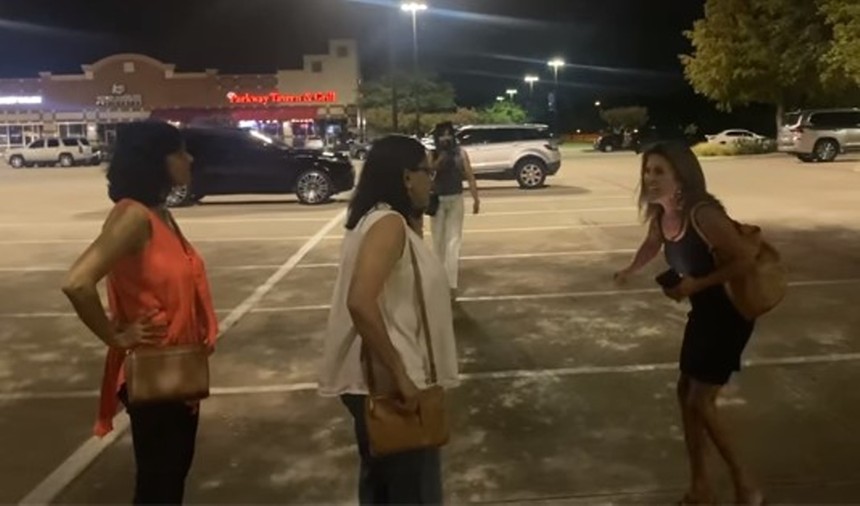 Esmeralda Upton, right, berates a group of Indian American women outside of a Plano restaurant in a video captured on a smartphone.
Screenshot from Facebook
Worst Karen Who Got Arrested: Esmeralda Upton
It takes a true Karen to get offended at the sound of someone using a foreign language in her presence. This Plano woman took being an entitled, racist person to pre-Alex Jones/Kanye levels back in August when she starting berating a group of women outside a restaurant. She then assaulted the women and got arrested for it.

Upton went after a group of women with insults like "curry-ass bitches" and "these fucking Indians" because she was offended that they were speaking to each other in the restaurant's parking lot. We're not saying "alleged" because the whole incident was caught on camera and posted to Facebook, including when Upton started trying to slap one of the women in the face while doubling down on her racist language and even threatening to shoot them. Police arrested and charged Upton on two misdemeanor counts of assault and terroristic threat, and at least one of the women she targeted slapped back with a civil lawsuit. 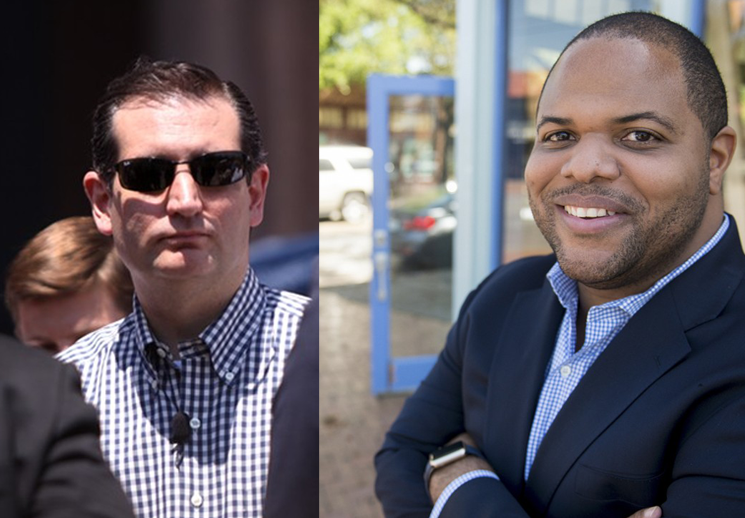 The first happened in March when Cruz pitched a hissy fit in Montana's Bozeman Yellowstone International Airport because he missed his flight. Since shutting down the government wouldn't help him in this instance, he berated two airline employees working the counter who regret every choice they made that day. Someone captured the whole thing on video. He even pulled the classic "Don't you know what I am?" card, a question Cruz really shouldn't want anyone to answer. Things got so bad that someone from the airport had to call police to calm him down, presumably by reading Ayn Rand to him until he finally fell asleep.

The following month, Johnson emulated Cruz's Karen-ing when he took to Twitter to whine about a Southwest flight back to Dallas from Washington, D.C. He complained that the "counter folks are not allowing anyone to even check a bag or receive a boarding pass who isn't wearing a mask." Then he topped it off with the closing argument: "Never seen power tripping quite like it. Shameful." He didn't try to throw around his title or ask to speak to a manager because Twitter has a character limit. When Dallas Love Field tried to clarify the updated law that masks are optional on Twitter, he made it worse by tweeting back with the ol' "This is still a nation of laws" and the "keep it 100" emoji. 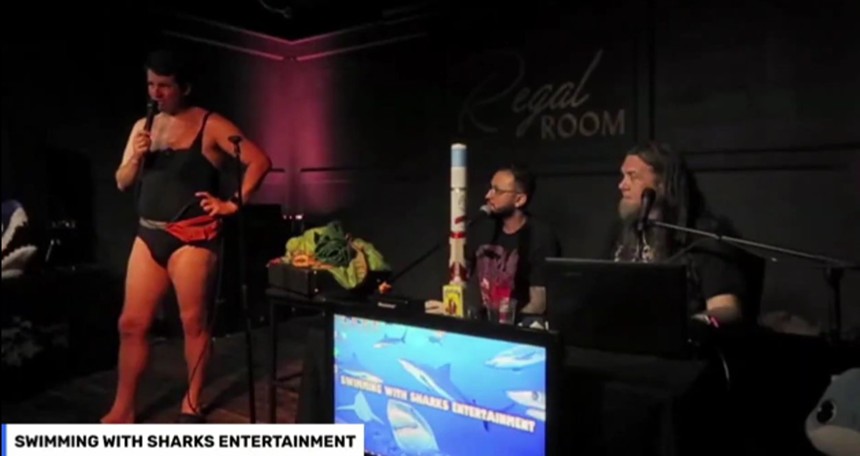 A show booked by comedian Noah "Shark" Robertson, right, got a noticeable amount of backlash when Alex Stein was put on the bill.
Screenshot from YouTube
Worst Unfunny Karen: Alex Stein
Being an unfunny Karen takes a special kind of unawareness. You not only have to be entitled and unhinged but you also have to be rude and unoriginal while trying and failing to be funny at the same time. One Dallasiite has all that going for him.

Human troll, failed reality show villain and world-class interrupter Alex Stein calls himself "Primetime #99 Alex Stein" because wearing an off-the-rack suit and saying Tucker Carlson is your father isn't douchey enough. He has achieved notoriety by inserting himself into situations where people don't want him to be  because he loves to make a scene. One example: crying about being discriminated against while protesting at a drag show and harassing performers walking back to their cars while screaming about how they're "exploiting little children."

Steins spends the rest of his time screaming at city council meetings and doing standup in women's clothes about how society won't let him become a female swimmer or have an abortion or thinking he's Borat by shoving a camera and his shit-eating grin in people's faces at polling places on Election Day or openly harassing Rep. Alexandria Ocasio-Cortez on the steps of the U.S. Capitol. He became a lock-solid winner for the award when Glenn Beck liked him enough to give him his own show on The Blaze.

Alex got his wish. He screams about wanting to be identified as a woman so we got him a name-tag that says Karen. You’re welcome. 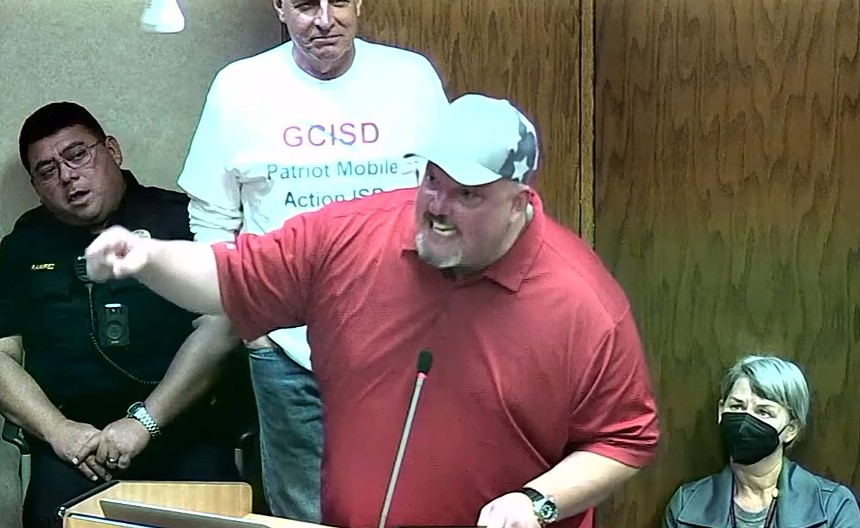 A parent speaking to the Grapevine/Colleyville ISD board had a MAGA meltdown.
Screenshot from YouTube
Worst School Karen: The Grapevine/Colleyville Independent School District
Schools are another perfect gathering place for Karens, but this year an entire school district's leadership wins the prize for doing something only a herd of Karens threatening to call the police over a barbecue couldn't accomplish.

The Grapevine/Colleyville Independent School District (GCISD) went deep in the red with new leadership from GCISD board vice president Shannon Braun, who promised on a right-wing blog that she planned to eliminate 18,500 vendors that "poisoned the minds of children" without specifying the what, how or why.

Then the district starting implementing sweeping book bans that included the annual Scholastic Book Fair and curriculum directions that eliminated lessons of "meritocracy or traits such as a hard work ethic are racist or sexist" and "the delivery of slaves and the advent of slavery" in the United States. The moves inspired a crowd of critics and supporters including one MAGA father who bellowed, "Keep winning so much, we'll keep coming. You know what? We're gonna keep coming so hard, the only thing these woke-tards got to figure out is whether it's on their face, back, butt or thigh! Whooo! Get some! Thank you." Paxton inserted himself and the state — because we elected him on the wrong side of some huge issues — in limiting transgender people's access to gender-affirming treatments in a legal order that prompted Gov. Greg Abbott to instruct the Texas Department of Family and Protective Services (DFPS) to investigate families seeking gender-affirming treatment for their kids as child abuse.

His report on statewide custodial deaths neglected to mention a Dallas County inmate who killed himself even though he was on suicide watch. He hinted that he would not be above revisiting the state's outdated sodomy laws in the wake of Roe vs. Wade's destruction, and he sued the Biden Administration over new guidelines designed to protect doctors who must perform emergency abortions. And on and on and on.

Paxton wins. There's no way we mixed up the envelopes with La La Land this year.
KEEP THE DALLAS OBSERVER FREE... Since we started the Dallas Observer, it has been defined as the free, independent voice of Dallas, and we'd like to keep it that way. With local media under siege, it's more important than ever for us to rally support behind funding our local journalism. You can help by participating in our "I Support" program, allowing us to keep offering readers access to our incisive coverage of local news, food and culture with no paywalls.
Make a one-time donation today for as little as $1.