Do Real DeLoreans Drive as Well as the One in Ready Player One? We Asked Local Owners.

Parzival, played by Tye Sheridan, steps into a 1982 DeLorean DMC-12 that looks like Doc Brown's time machine from the '80s sci-fi comedy Back to the Future. courtesy Warner Bros. Pictures
The new Steven Spielberg movie Ready Player One, based on the popular adventure novel by Ernest Cline, takes movie audiences to a not-to-distant future when gamers log on to a massively multiplayer online (MMO) game called The Oasis to be whatever their pop-culture-loving hearts desire.

The main character, Wade Watts, played by actor Tye Sheridan, dresses up as a virtual kid named Parzival who dons the clothes of his favorite '80s movie characters and races in a movie car mashup of the Ecto-1 from Ghostbusters, KITT from Knight Rider and the DeLorean DMC-12 time machine from Back to the Future.

The movie pits Parzival against a mega-corporation that's hell-bent on controlling The Oasis by finding the secret Easter egg hidden in the game. One of the first legs of the Easter egg hunt features a race in which Parzival whips his DeLorean around a virtual race track.

There's no chance a stainless steel beauty could even compete in such a race, says Robert Martin, a chemist and IT expert who owns a DeLorean.

"The acceleration's not great," Martin says. "It's like any early '80s classic car, so it's still got creaks and groans here from time to time. The factory spec curb height and the lower suspension and springs with the handling. ... If you drag race a Prius with it, the Prius might beat ya."

Of course, Parzival's DeLorean only exists in a virtual world. The real DeLorean, built and manufactured in the early '80s by famed car designer John DeLorean, wasn't built for speed. The car, one of the most iconic vehicles of the decade, was built for style.

"It's a little bit less pretentious than something like a Lamborghini," says Robert "Videobob" Moseley, the owner of Bob's Prop Shop in Duncanville, which builds replicas of film and TV cars. "For instance, in the movie The Wedding Singer, the bad guy is seen driving this pretentious car. I suppose in 1985 before Back to the Future, you would have perceived that to be a pretentious car driven by some douchebag drivers. But after Back to the Future and because of nerd culture, it's no longer perceived this way." 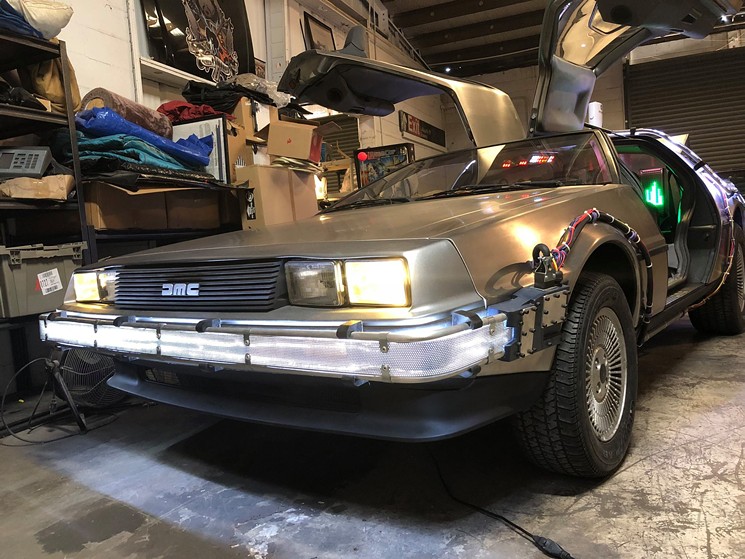 Robert "Videobob" Moseley, owner of the movie and TV replica car garage Bob's Prop Shop, has bought, restored and built DeLoreans into the iconic time machine from Back to the Future.
courtesy Bob's Prop Shop
The DeLorean still looks like some kind of future car with its stainless steel exterior, red and yellow brake lights, and gull-wing doors.

"You're not buying it for performance," says Carl "Dash" Matthys, a Keller resident who works as a credit risk manager and owns a fleet of collectible cars. "You're just buying it because it's a cool car."

Long before Moseley started building movie car replicas for a living, he decided to buy the first of many DeLoreans after seeing a group of car builders attempt to turn one into a hovercraft on the Discovery Channel reality show Monster Garage. He found a seller who tossed him the keys and told him he could take it for a test drive.

"It drives like a go-kart," Moseley says. "Even though it's not that fast, it still feels fast. That made it a poor seller because it was $21,000 in 1981, and you could buy a high-end Italian car for that price. John DeLorean's concept wasn't to make it a fast car. It was supposed to be an ethically conscious car."

The car was also made before some major advancements in automotive technology that we often take for granted.

"You gotta have some guns on ya," Moseley says. "There's no power steering, no power anything. And the front wheels are smaller than the back wheels, and this has become a real problem because there's no company that makes both in the same series. So you have to buy two different sets of tires."

Maintaining the car also requires regular upkeep. The DeLorean has more hoses than most cars because of its unusual layout. Martin says the rubber hoses can wear away over time and the gasoline can go bad if you don't drive it enough to move it through the system.

"It's got miles of hoses, so the one time I got stranded, it's because of one of those hoses," Martin says. "It's one of those early fuel-injection systems where if you don't drive it with some regularity, you'll have problems. Just keep fresh fuel running through it because modern fuel, especially with ethanol additives, have a shorter shelf life." DeLorean owner Robert Martin of Arlington drives his beloved car in local parades and sometimes to work.
courtesy Robert Martin
But it doesn't require as delicate of a touch as fancier cars, Matthys says.

"Shocks wear out, bearings wear out and alternators wear out," he says. "It's just regular maintenance like any other car. It's not as finicky as Porsche or BMW. It's a good, reliable car. I could get in that thing and drive to Canada, and I know it would make it there."

Of course, a DeLorean isn't meant to be kept in a warehouse or a garage.

"Functionally, it's purely a looks car," Martin says. "The performance is fun in terms of handling, but if you want a speed car or a sports car, there are better options for the money."

Moseley says the typical DeLorean that hasn't been modified can get up to 130 mph and reach 60 mph in 16 to 17 seconds, but it's not the performance that turns heads.

"I've had people run out in the middle of the street and stand in front of me so I can't go, just so they can take a picture of the car," he says.

"It's a cult following," he says. "It's that especially now that Back to the Future is 30 years old. A lot of people my age remember that as a kid, and it was such a cool thing when you saw one on the movie screen and it came out of Doc Brown's van. It was a kick-ass car, and it doesn't look dated. It's something out of the '80s, but it's so futuristic, it looks like it came out today. It's so far ahead of its time that it still holds the test of time.

"Ready Player One may set up a whole new generation of people who are into this car."