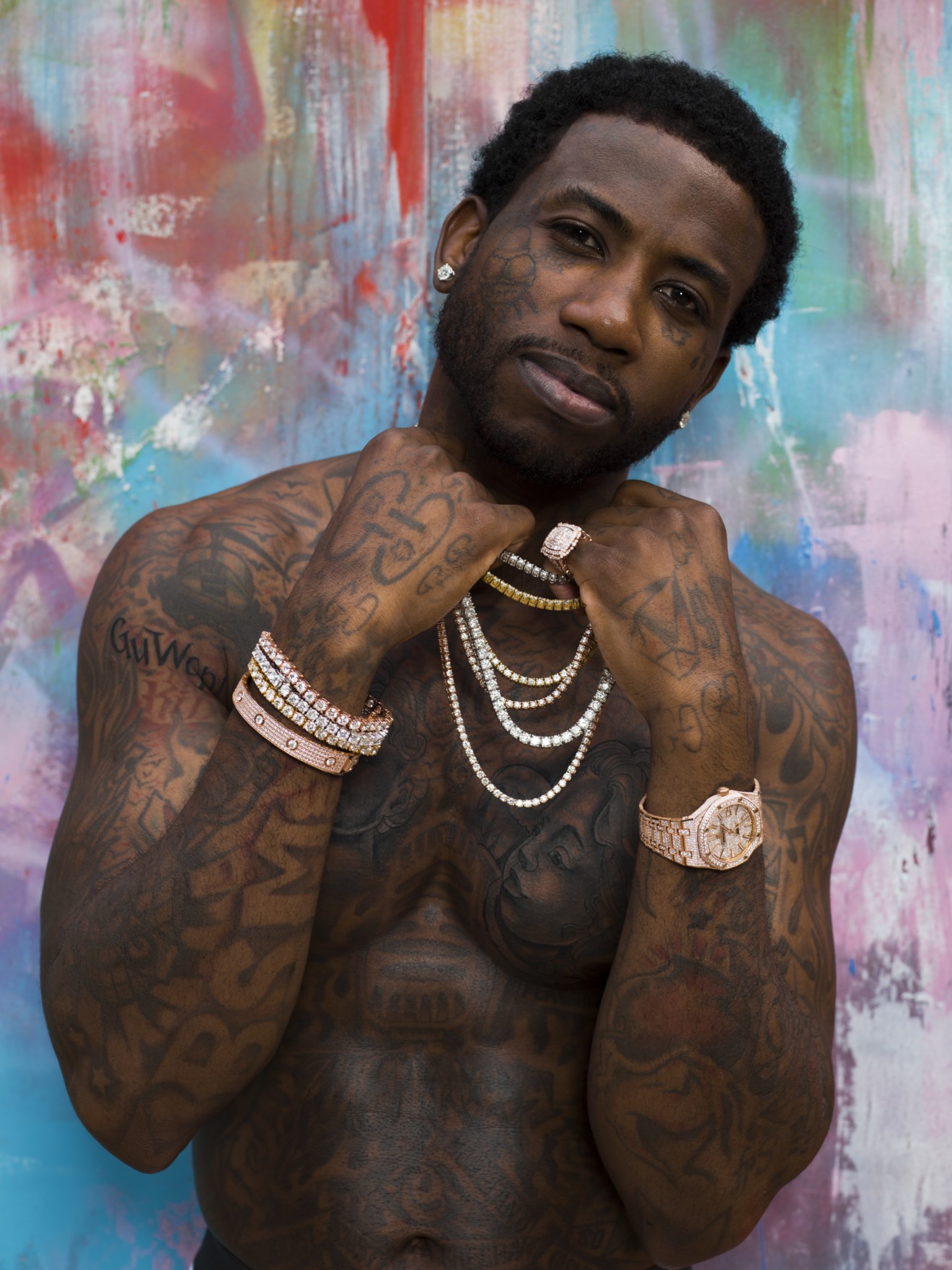 Gucci Mane performs Sunday, June 5, at Wild Acre Live in Fort Worth. Jonathan Mannion
It's looking like a mostly mellow week, North Texas. For your concert calendar, things kick off with just a touch of jazz as experimental rock band Steely Dan gets things going in Fort Worth and Tim Cappello heats things up in the heart of Deep Ellum. Also starting Thursday is the WTFemme!? podcast's first festival, FemmeFest, which goes through Saturday. On Friday night, Neko Case brings her retrospective tour down Greenville Avenue while Anika hosts a dark dance party at Cheap Steaks. In Denton that night, Upsetting and Genius Christ give Denton a farewell before a short tour. Saturday, the ol' dirty basement in Denton comes roaring back to life while Kenny Chesney fills AT&T Stadium. Gucci Mane plays Fort Worth for the first time ever on Sunday and The Pavilion at Toyota Music Factory hosts a night of late '90s nostalgia next Tuesday. Let's get this summer going!
Steely Dan
6 p.m. Thursday, June 2, at Dickie's Arena, 1911 Montgomery St., $39.50+ at ticketmaster.com

After a two-year wait, jazz-rock troubadours Steely Dan will be bringing their Earth After Dark tour to the Dickies Arena on Thursday with Denton's own jazz collective Snarky Puppy providing opening support as special guests. Steve Winwood was originally scheduled to open, but he dropped out due to the pandemic and scheduling conflicts. Steely Dan found great success in the 1970s with hits such as “Reelin’ in the Years” from its debut Can't Buy a Thrill, but it wasn't long after that album that the band decided to expand the experimental jazz elements of its music. The hits, such as “Rikki Don’t Lose That Number” and “Peg”  kept coming, making Steely Dan one of the most respected bands in popular music. Steely Dan lost original member Walter Becker in 2017, but his longtime partner in music Donald Fagen has been keeping the act alive backed by a crew of talented musicians.
Tim Cappello
7 p.m. Thursday, June 2, at Three Links, 2704 Elm St., $25 at the door

American multi-instrumentalist, composer and vocalist Tim Cappello is known primarily for his saxophone work supporting Tina Turner in the 1980s and '90s, as well as his performance in The Lost Boys covering The Call's "I Still Believe." Outside of his famous supporting roles, Cappello has been a longtime composer for television and film, lending his musical talent to A&E documentaries on subjects such as The Rat Pack, Lana Turner and Jerry Lewis. For all his years in and just outside of the spotlight, Cappello only released his first solo album in 2018, Blood On the Reed, for which he toured extensively up until the pandemic hit. Cappello returns to Three Links in Deep Ellum Thursday night with opening support from DJ crew, Unprotected Sax and synth-punk duo Little Beards.
FemmeFest 2022
8 p.m Thursday, 6 p.m. Friday, 2 p.m. Saturday, June 2-4, at Rubber Gloves, 411 E. Sycamore St., $10+ at prekindle.com

Celebrating its fourth birthday, Denton's WTFemme!? podcast hosts its first FemmeFest at Rubber Gloves. Created to help better answer the question “What does being femme mean?” the three-day event  celebrates the artists, musicians, performers, vendors, and of course, attendees who make the podcast and the Denton arts community so great. Festival-goers can look forward to music, food, art and all things femme including Queer Variety Showcases, dance workshops, improv and a live recording of the WTFemme!? podcast. All the proceeds for the weekend will be split between the Denton Bail Fund, which offers monetary support to low-income community members who cannot afford to pay their bail, and The R4K Fund, which supports North Texans impacted by breast cancer. Ursa Minor, No Good Babies, Lovesick Mary and more will be providing the soundtrack.
Anika
7 p.m. Friday, June 3, at Cheap Steaks, 2613 Elm St., $15 at etix.com

Annika Henderson is a founding member of Mexico City-based post-punk band Exploded View. For her solo, Berlin-based project, Anika, the artist recently released her second album, Change, along with a video for its title track directed by Sven Gutjahr, who also directed the video for recent single “Finger Pies.” Anika's first solo album in over a decade, Change, is an intimate creation fraught with anxious reflections on global chaos. Having built on solid electronic soundscapes reminiscent of Boards of Canada, coupled with the singer's Nico-esque voice, Anika's made Change an album worth returning to again and again. Anika will have opening support from El Paso band Lesser Care and Houston band Don't Get Lemon.
Neko Case
7 p.m. Friday, June 3, at Granada Theater, 3524 Greenville Ave, $41 at prekindle.com

Singer-songwriter Neko Case has always been difficult to pin to any genre. Her work has run the gamut of indie-rock, alt-country, Americana, pop and art rock. Since 2000, the singer has split her time between her solo career, indie-rock band The New Pornographers and a handful of other bands including case/lang/veirs in which the singer worked with k.d. lang and Laura Veirs. Most recently in her solo work, Case released her seventh solo studio album in the summer of 2018, Hell-On. An alternative country album, Hell-On was met with near universal acclaim for its intimate songwriting and its incredible production. For the album, Case took on the production duties herself alongside Franz Ferdinand producer Björn Yttling. Case is currently touring in support of her career-spanning retrospective album, Wild Creatures, which also includes an essay, track commentary and artwork by Laura Plansker.
Upsetting
7 p.m. Friday, June 3, at Andy's Bar, 122 N. Locust St., $9 at prekindle.com

If you haven't heard Upsetting since its days on State Fair Records, you're missing out. The band has been a North Texas favorite since it was known by its pop-punk name Teenage Sexx. But, as the years have passed, their young singer/guitarist Caleb Lewis has aged and the band's membership has grown to accommodate second guitarist Drew Kee, so the band has expanded its punk sound to include more math-rock, pushing them in the direction of emo-revival bands like The Hotelier and Modern Baseball. Friday night's show will be a send-off for the band, which will be making a short tour through Texas in the coming week with Denton's Genius Christ. Friday night's show will also see performances by riot grrrl band Homewrecker & the Bedwetters, noise rock band Starfruit and Girlo.
Kenny Chesney
5 p.m. Saturday, June 4, at AT&T Stadium, 1 AT&T Way, $25+ at seatgeek.com

Singer Kenny Chesney is inarguably one of the most successful crossover country artists in the last three decades. With over 20 albums and over 40 songs making an appearance in Billboard's Top 10 list, Chesney has sold over 30 million records around the world. Part of his continued success is the close relationship he maintains with his fans. In the days when even nosebleed seats can run close to 100 bucks, Chesney's concert at AT&T Stadium is offering fans tickets at only $25 apiece. His most recent album, Here and Now, came out in May 2020 and became Chesney's 16th Top 10 album on the strength of its first two singles, the title track and "Tip of My Tongue." Chesney's performance in Arlington this Saturday will have opening support from pop country duo Dan + Shay, country rock band Old Dominion and country bluegrass singer Carly Pearce.
ODB-day Boogie
8 p.m. Saturday, June 4, at Graffiti Pasta, 118 W. Oak St., $10 at the door

If you hadn't heard the news, J&J's Pizza in Denton has been closed for almost a year now, and in its place stands Graffiti Pasta. What also lives on in the wake of J&J's is the legendary ol' dirty basement, lovingly referred to as the ODB, which has been hosting shows since even before J&J's took over. The venue has hosted a few shows leading up to the big ODB-day Boogie event Saturday night. Five bands will take the basement floor that night, including the notorious symphonic brass punk The Wee-Beasties who hold the 10 o'clock spot in the lineup. Also playing that night is party-punk band ¿Everything Is Temporary?, fusion band Strong Work, pop-punk band 11:83 and rock band FarlaVae.
Gucci Mane
7 p.m. Sunday, June 5, at Wild Acre Live,1734 E. El Paso St., $48+ at defytickets.com

Atlanta rapper and trap music pioneer Gucci Mane is coming to Fort Worth for the first time ever thanks to the folks at Fortress Presents and DeFy tickets. The show will take place at Fort Worth's newest home for live music, Wild Acre Live, which is located about 100 yards away from Wild Acre Brewing Co. on East El Paso Street. Gucci Mane has released over 70 mixtapes in his career, documenting all the trials and tribulations of living, dying and surviving on the streets of Atlanta, searching for redemption and finding a sense of peace. The rapper has struggled publicly with the law, opioid addiction and his weight, but emerged a new man when he was released from prison for a 2013 gun charge after going to rehab and dedicating his life to healthier decisions. Gucci Mane released his 15th studio album Ice Daddy last summer sounding reinvigorated and ready to take on anyone who would dare deny his status as a hip-hop pioneer.
Barenaked Ladies
7 p.m. Tuesday, June 7, at The Pavilion at Toyota Music Factory, 300 W. Las Colinas Blvd., $43+ at livenation.com

Canadian band Barenaked Ladies have been thought of as a something of a joke act in the world of American pop-alt-rock since their breakthrough hit single "One Week." While the band has released plenty of singles in the last 35 years, none have had quite the same impact as "One Week" — except maybe the theme song they provided for The Big Bang Theory. The band's deep cuts, however, reveal that the band is far more than a group of merry pranksters, with songs that show great emotional depth an snarky social commentary. Coming through Irving next week, Barenaked Ladies bring with them two bands from the '90s with whom they shared the radio waves when the band was known for "Old Apartment" instead of "One Week." Gin Blossoms and Toad the Wet Sprocket will be providing the opening support for this night of '90s nostalgia.
KEEP THE DALLAS OBSERVER FREE... Since we started the Dallas Observer, it has been defined as the free, independent voice of Dallas, and we'd like to keep it that way. With local media under siege, it's more important than ever for us to rally support behind funding our local journalism. You can help by participating in our "I Support" program, allowing us to keep offering readers access to our incisive coverage of local news, food and culture with no paywalls.
Make a one-time donation today for as little as $1.