In Honor of Pink's World Tour, Some of Her Greatest Moments 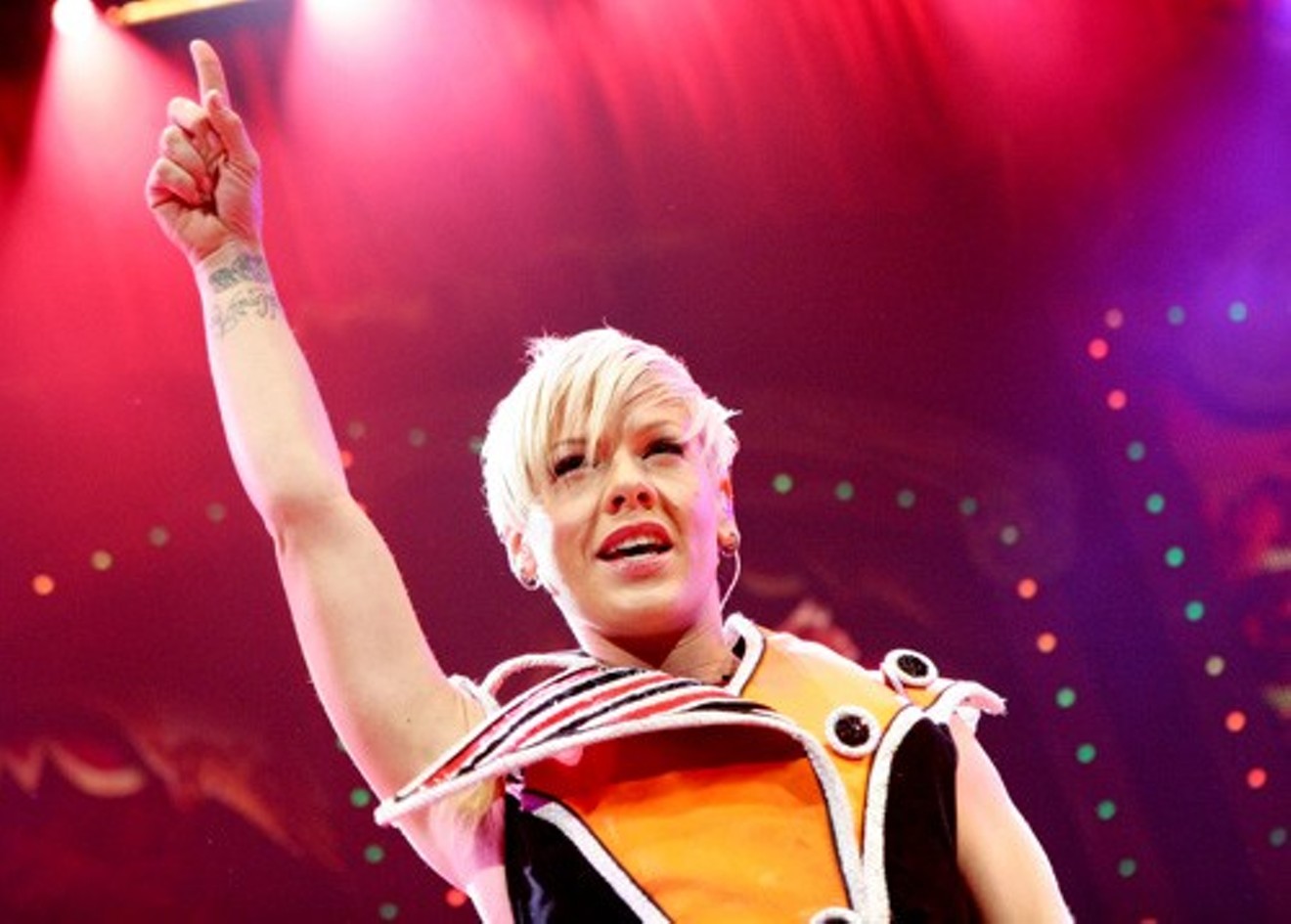 P!nk will make three stops in Texas in 2023. Rachel Parker
Shortly after we heard that Pink would be delivering what will surely be an emotional tribute to Olivia Newton-John at this year’s American Music Awards, she announced a new nationwide tour in 2023. While she revealed last year that she would be hitting major European festivals such as BST Hyde Park, Werchter Boutique and Pinkpop Festival as part of her Carnival Tour, her North American visits are sure to inspire an even greater interest.

Tickets are going fast, and Dallas music fans may have to make a bit of a trek in order to catch Pink in concert. The singer will appear at the Alamodome in San Antonio, Minute Maid Park in Houston and Globe Life Field in Arlington at the very end of September 2023. While it’s somewhat disappointing that she didn’t manage to slip in an appearance at the American Airlines Center, 2023 is already set to be a massive year for Dallas concerts with visits by Taylor Swift, Blink-182, Ed Sheeran, Bruce Springsteen and Arctic Monkeys over the course of a packed 12 months.

However, Pink’s Carnival Tour isn’t a solo effort; Brandi Carlile, Pat Benatar and Neil Giraldo are all expected to appear at various venues. Considering how massive Hurts 2B Human was when it debuted in 2019, Pink certainly had to find a way to continue raising our expectations.

Pink’s open, idiosyncratic personality has made her a uniquely personable pop icon. It’s possible that her trailblazing career set the trend for an entire generation of pop stars. Her vocals aren’t just astonishing due to the notes she’s hitting; it feels like every lyric is delivered with genuine emotional sincerity. We often criticize celebrities for their plasticity, but Pink is remarkably open about her life, music, sexuality, and mental health during her appearances in the public spotlight. She serves as an inspiration to artists like Christina Aguilera, Adele, Kelly Clarkson, Katy Perry, Victoria Justice, Demi Lovato and her other great female contemporaries. Here are just a few of the moments that made us fall in love with Pink.

Pink Freaks Out Over Her Celebrity Crush
Pink has contributed to the soundtracks for many popular films, including the 2016 live-action fairy tale adventure Alice Through The Looking Glass. While she contributed an inventive cover of Jefferson Airplane's “White Rabbit,” Pink’s biggest achievement on the project was getting to meet her celebrity crush, Johnny Depp. During a promotional tour on Jimmy Kimmel Live, Pink received a surprise visit from the Mad Hatter himself. Her overwhelmed expression is how any of us would feel if we met our childhood idol. Pink Stops a Show Mid-Performance to Help a Fan Grieve
Any artist of Pink's magnitude is bound to be bombarded with fan requests and crazy signs. Considering how massive her stage shows are, Pink could be forgiven for missing any fan's attempts to get her attention. However, she stopped her 2018 show in Brisbane after noticing a fan holding a sign that read “My name is Leah — I’m 14 years old. I lost my beautiful Mum last month. I would LOVE a hug … Please!” She took the request to heart, and took a personal moment to help this teenager cope with her loss. Pink Protests Sexism in Norwegian Handball
For some ridiculous reason, the Norwegian women's beach handball team was fined 1,500 euros for wearing “improper clothing” during a 2021 match. The team refused to wear the bikini bottoms that were issued, and chose to wear the same attire worn by their male counterparts. Apparently the Norwegian Handball Federation took issue with this, but Pink offered to personally pay the fines. She said that she was “very proud of the Norwegian female beach handball team for protesting sexist rules about their uniform.” Pink Takes Out a Billboard in Support of PETA
Pink has been open about her support of animal rights and the work that PETA does to raise awareness. PETA started a social marketing campaign in 2015 to protest the exploitation of animals for luxury clothing with the "I'd Rather Go Naked Than Wear Fur" campaign. While this cause may have slipped by otherwise, Pink called attention to it when she took out a 90-foot billboard in the middle of New York's Times Square. Pink Explores “Beauty With an Edge”
Covergirl has been both criticized and praised for its advertising campaigns. While the brand has been more open in recent years to different body types, it’s also been called out for promoting traditional beauty standards. Pink set a bold new tone for Covergirl in 2013 when she launched the “beauty with an edge” campaign. Pink’s Generous Donations to Autism Speaks
While many celebrities put their names on charitable causes without any vested interest, Pink took part in the Los Angeles Celebrity Chef Gala and made a surprise appearance at the end of the event. There was nothing about her contributions that felt impersonal; she donated iPads to low-income families that were specifically designed to fit their needs. Pink Takes a Frank Look At Motherhood in a Personal Documentary
Pink is generally pretty open with her fans, but she gave her deepest insights into her own career last year in the Amazon Prime Original documentary Pink: All I Know So Far. Although there’s a fair amount of archival footage, the film explores how Pink balances her role as a mother with being one of the most in-demand pop artists in the world.
Pink Lampoons Celebrity Activism in Popstar: Never Stop Never Stopping
Lonely Island brought its humorous viral videos to the big screen with the musical mockumentary Popstar: Never Stop Never Stopping. Andy Samberg stars as “Conner4real,” a selfish pop icon who is desperate to cash in on any popular trend. The film really works because of the celebrity cameos, and Pink appeared as herself for a duet of the original song “Equal Rights.” Pink Called Public Attention to the Australian Bushfire Victims
In 2020, a huge bushfire threatened Australia and devastated the environment. Given Pink’s history of charitable donations and her interest in environmentalism, it’s not surprising that she was one of the first celebrities to draw public attention to the crisis. In addition to donating to the Red Cross Bushfire Appeal, she helped circulate support phone lines on social media to help the victims find resources.