What You Missed at the DOMA Showcase Kwinton Gray joined his siblings and Cure for Paranoia onstage. Malen Blackmon
The Dallas Observer Music Awards showcase took place this Saturday night in Deep Ellum and, though we nominated the acts, they exceeded even our own expectations. Over 40 nominated bands played in various locations. The streets were already exciting. Present were the usual weekend crowds, but members of the Denton Krampus Walk were roaming the streets displaying their best yuletide horror. We've compared notes to select the ultimate highlights. The Grays and Cure for Paranoia


Kwinton Gray showed the crowd why he won Best Keyboardist in 2017. His left hand slid across one electric keyboard while his right hand did the same on a separate keyboard. At times during his set with the Kwinton Gray Project, he utilized a third keyboard that was positioned in front of him. What a show-off. Malen Blackmon

The Kwinton Gray Project includes Best Bassist nominee KJ Gray, and the brothers added another sibling, Best Female Singer nominee Kierra Gray, into the mix. Already this was a promising lineup, but then, this greedy bunch went and added Cure for Paranoia to create a joint performance, ending up with the most exuberant — almost vulgar — display of local talent. As Cameron McCloud's words rattled along with singer Stanley Mongaras' fluttering vocals, the polyphony of jazz and hip-hop grooved magically as the group jammed video game and TV show tunes. Eva Raggio

Anyone you ran into on Saturday had only one word, "Mattie," to sum up their favorite show. And with good reason. The singer/rapper took the outdoor stage at Club Dada in green hair and green face paint, yet there was nothing "green" about it. MATTIE is a young, but seasoned, performer, and her mystical haunting words were enhanced by the slow drama in her movements and that of her dancers, contorting along to her message. Part concert, part performance art, her set was purely intense and unmissable. Eva Raggio


The bill at Club Dada

Holding an audience’s attention is hard to do any night, but it can be even harder during DOMAs. With so much freedom and so many options on the musical buffet, many DOMA-goers understandably choose to take small bites of everything. That’s partly why Flower Child’s performance at Club Dada — a magnet for star power all night — was so impressive. The soulful singer/rapper (who is up for Best New Artist on Tuesday night) and her ensemble held court both inside the club and out. During their performance of her new single “Autumn Leaves,” passersby on Elm Street could be seen smushing their faces against the small window next to the stage, enraptured. Whether or not Flower Child takes home the title this year, her dynamic, polished performance last night was all the confirmation we need that she is not merely a rising star, but a star, period. Caroline Pritchard

Rock isn’t the dominant genre on the air waves anymore, but you wouldn’t have known it Saturday in Deep Ellum. Nick Snyder and Mean Motor Scooter gave some of the best performances of the night, both on the outdoor stage at Club Dada. Shortly after 9, Fort Worth’s Mean Motor Scooter got the crowd going with a playfully angsty performance of TV Baby (up for Best EP) that called to mind the Violent Femmes. An hour later, Best Guitarist nominee Nick Snyder — accompanied by a bassist and drummer — kept the momentum going with his blues-inflected wailing. The trio seemed relaxed but worked efficiently, for a performance that was both startling and charming in its power. The Woodstock-ready onlookers who packed in around the stage ate up every lick, and we walked away comforted that rock ’n’ roll is safe from extinction for another year. C.P.

I saw some amazing performers, but the most memorable was Helium Queens. Chelsey Danielle, Poppy Xander and Shara Franklin each perform so intricately and stand out on an individual basis, but at the same time, their chemistry truly carried the show. They play the characters of terrestrial ambassadors for extraterrestrial beings, but even if you find that gimmicky, the set oscillated between experimental cuts and outright pop bangers. They also laid their merch on one of the monitors, given that the merch table at Club Dada couldn’t accommodate 14 performers. Garrett Gravley 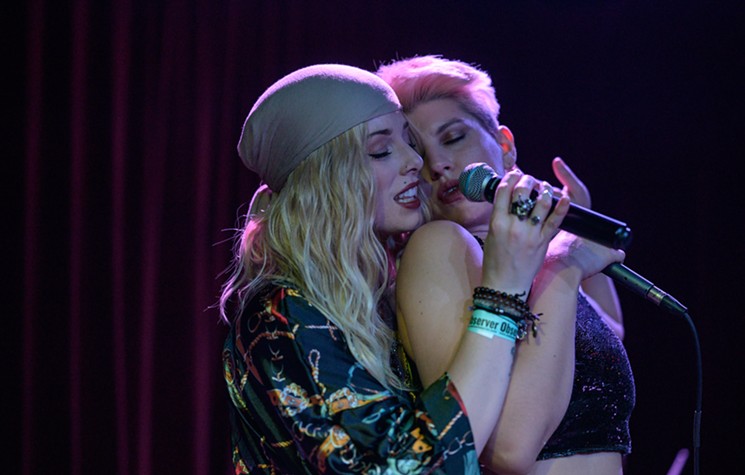 There was double trouble in PriMadonna.
Mike Brooks

The PriMadonna set was one for the ages. Lead singer Adrian Lea Valhalla sported a floral silk robe and head scarf while she danced around the stage and sang some of Madonna’s most memorable records. If you closed your eyes and listened, you would have thought it was actually Madonna onstage. But even with your eyes open, it would have been hard to tell the difference. People had their toes right on the edge of the stage in Club Dada stuck in a trance as they watched her fluid movements and silk robe flow effortlessly. Her band member, pianist Poppy Xander, a past DOMA winner and she is up for more this year, as Best Keyboardist and with a couple of nominations with her Helium Queens bandmates: for Best Live Act and Best Electronic Act. Malen Blackmon

The striptease by ASS

The vocalist of American Shit Storm (ASS) greeted us with a meta striptease. He unbuttoned his black pants with buttons on the side, and as he ripped them off, he revealed another pair of pants underneath, essentially teasing a striptease. G.G.

The fact that you couldn’t blame the sound guy

The new country acts who made us think hard

Frankie Leonie provided the soundtrack to me remembering how much I hate the taste of Fireball, and how bad a chaser Lone Star is. Five people stuck around watching attentively as Kirk Holloway was doing a line check 30 minutes before his set. I had to leave to catch other acts, but if people were that entertained by Holloway’s mic check, just imagine how enjoyable his actual set must have been. G.G.

Seeing Dahlia Knowles/Lorelei K posing for pictures around Reno's patrons who were detached from all the action was like seeing a Renaissance painting in real life. G.G.

Rosegarden Funeral Party closed out an excellent bill at Reno's. As singer Leah Lane told the crowd, this was their last DOMA show before moving to California. And they weren't going to leave without giving the crowd something to remember them by. Lane stood on the drums, high above the crowd, as Aaron Mirelles from Sub-Sahara doused water on the audience. Members from other bands on the bill joined the stage, as the group's constant photographers, Erin Shea Devany and Velma Hernandez, took turns on the mic with Lane. Drummer Dylan Stamas took a stage dive while a small, mostly considerate, mosh pit formed in the front. A day after the show, the band revealed in a Facebook post, that on Friday, the night prior to their DOMA performance, they had been driving home from a gig in Fort Worth when they made a sharp turn in their van, which caused it to flip and to begin "skidding sideways in the opposite lane." None of the passengers were hurt, and they brought their newfound appreciation of life to a particularly deadly set. The van, however, did not fare well, and the band set up a GoFundMe to be able to repair their touring van. In three hours, they had reached two-thirds of their goal. This means, that Rosegarden's Saturday set was just mere hours after they cheated death. Lucky for us all, there was a party, but, no funeral. E.R.

See the best photos of the 2019 DOMA showcase here.
KEEP THE DALLAS OBSERVER FREE... Since we started the Dallas Observer, it has been defined as the free, independent voice of Dallas, and we'd like to keep it that way. With local media under siege, it's more important than ever for us to rally support behind funding our local journalism. You can help by participating in our "I Support" program, allowing us to keep offering readers access to our incisive coverage of local news, food and culture with no paywalls.
Make a one-time donation today for as little as $1.
Dallas Observer Staff