10 Best Concerts of the Week: Barry Manilow, They Might Be Giants, Walk The Moon and More 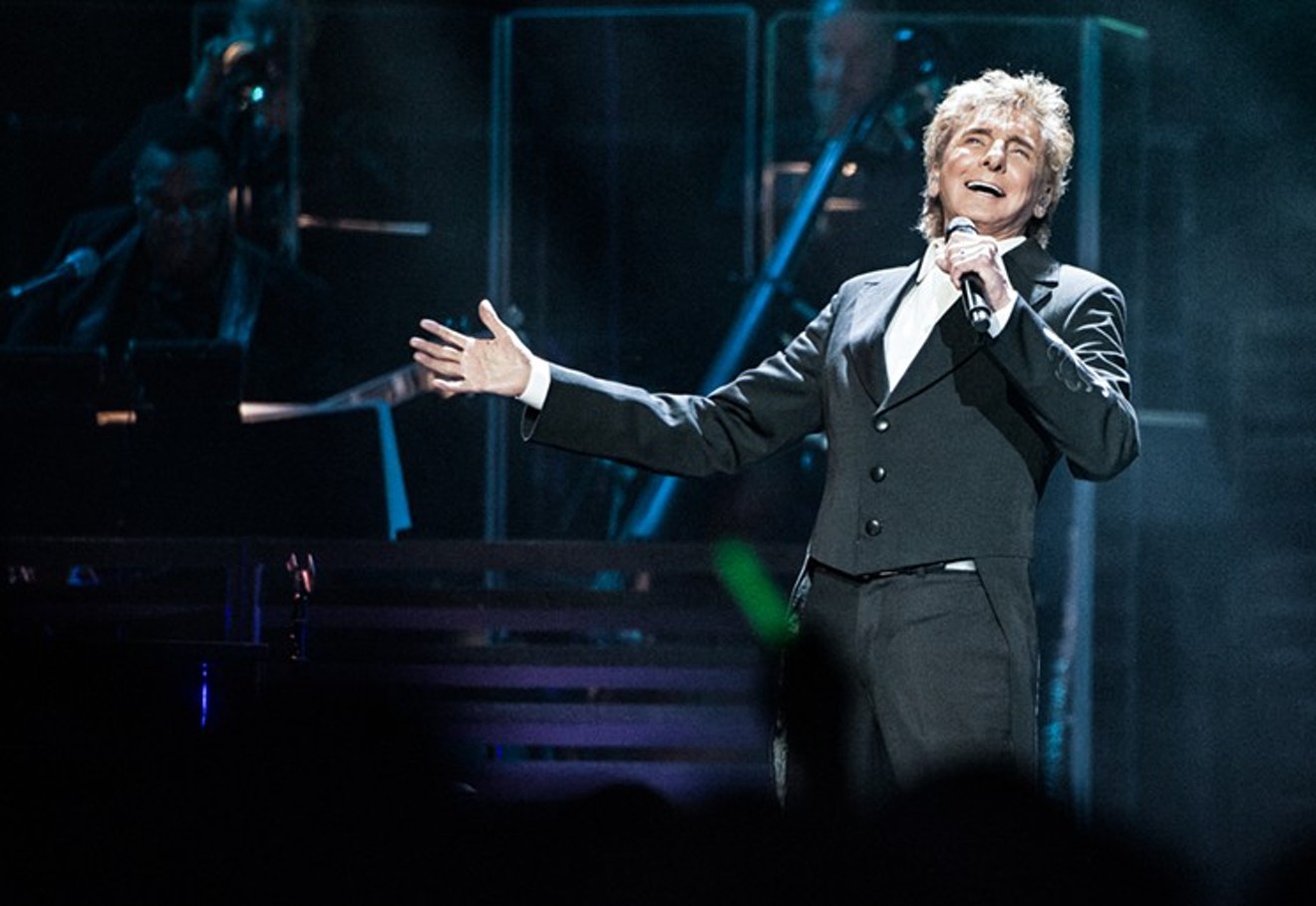 Let Barry Manilow swoon you with all the hits Thursday night at The Pavilion at Toyota Music Factory. Mike Brooks
It's a pretty impressive week of music to round out the month whether you're in the mood for an over-the-top crooner with a longer than 50-year career or you're itching to find a new local favorite (for free) in Deep Ellum. If you're bummed that Say Anything's Max Bemis had to cancel the band's tour because he's sick, you can still catch some great shows from Børns, Barry Manilow, Black Taffy, John Maus and plenty of others.

Lauv is a Los Angeles-based singer-songwriter with writing credits for Demi Lovato and Charli XCX, but he doesn’t have an official album. Nonetheless, the 23-year-old is an international sensation because of a Spotify playlist titled "I met you when I was 18," which comprises “The Other” and the global hit “I Like Me Better.” The latter earned more than 100 million plays on the music platform and more than 10 million views on YouTube. Those impressive stats landed the soulful vocalist an opening slot on the Asia dates of Ed Sheeran’s Divide Tour at the end of 2017, and Lauv has announced plans to headline shows in Australia, New Zealand and Europe starting in March. But first he’ll play an intimate show at the House of Blues’ Cambridge Room for his loyal stateside fans. Those able to snag tickets should cherish the moment; Lauv is on a fast track to stardom thanks to his hopelessly romantic ballads fusing R&B and indie-pop. Mikel Galicia


Børns
7 p.m. Thursday, Feb. 1, House of Blues, 2200 N. Lamar St., 214-978-2583 or houseofblues.com/dallas, $30-$49.50 A lot of today’s music sounds something like mid-'80s pop with the sharpness, contrast, saturation and sugar content cranked way up, and Børns sounds something like the late '70s variation on that theme. While he certainly looks backward for inspiration, his records have that genetically modified, test-tube-grown goodness we’ve come to expect from major modern radio acts. Elliot Wright

Despite his fame and success, Barry Manilow has never been taken seriously — not by self-consciously “serious” listeners and critics, anyway. Manilow does not suffer from self-consciousness, and it’s why he’s enjoyed such a broad and, at times, devoted fan base for more than half a century. Revisit mega hits like “Mandy” or “Copacabana,” and you’ll find plenty of emotional indulgences and simple-sugar hooks, but you’ll also find an immensely underrated talent for arrangement. It’s no accident he’s composed for artists as big as Bette Midler and been praised by the likes of Frank Sinatra and Bob Dylan. His music might scan as corny or sappy, but really it’s just genuine and uninhibited — more so than we’re accustomed to in modern music. The late writer David Foster Wallace once remarked that “what passes for hip … is really some kind of fear of being really human, since to be really human is probably to be unavoidably sentimental and naive and goo-prone.” If we’re to take those words to heart, there are few artists alive as unabashedly human as Barry Manilow. Jonathan Patrick

Tennis has a knack for making the old new again. When the husband and wife duo of Patrick Riley and Alaina Moore burst onto the music scene in 2011, they instantly became the darlings of the blogosphere and college radio with their dreamy indie-pop tunes and retro aesthetics. That album, Cape Dory, won the hearts of music lovers across the country who learned the couple wrote it after returning from a yearlong sailing trip on the Atlantic. For their most recent and fourth album, Yours Conditionally, the couple turned to the same method and set sail for the Sea of Cortez along Mexico’s coast. They returned with music channeling the ’70s even further. Moore’s voice is strikingly reminiscent of Stevie Nicks, but it still feels like Tennis. Mikel Galicia

2017 was a whirlwind year for Dua Lipa. The 22-year-old U.K. pop singer released her debut, self-titled album and instantly saw breakout success with the single “New Rules,” which sailed to No. 1 in the United Kingdom, helping her finish the year as Spotify's most-streamed female artist from the U.K. Stateside, “New Rules” caught fire on YouTube, and American audiences are starting to get hip to the singer’s superstar prowess. 2018 is shaping up to be huge for Lipa; she’s teamed up with high-profile producers such as Jack Antonoff, Diplo and Chris Martin, and is rumored to have a duet with Ariana Grande on the way. Couple that with recent news that she is the first female artist to receive five Brit Awards nominations— for best album, best female artist, best video, best single and breakthrough artist of the year — and consider yourself lucky if you snagged tickets to this performance at the South Side Ballroom. Mikel Galicia

Swedish singer-songwriter José González is best known for his covers. After releasing his stripped-down version of “Heartbeats” (originally performed by fellow Swedish group The Knife), González’s 2003 solo debut, Veneer, became an instant classic in his native country. His music quickly made its way across the Atlantic after his first U.S. release in 2005, and TV shows and movies that featured González’s music further urged on this popularity. Since then, he’s gone on to make impressive acoustic renditions of tracks by Joy Division, Massive Attack and Bruce Springsteen under the banner of folk rock group Junip. In 2015, his third studio album, Vestiges & Claws, moved away from the minimalism of his earlier work, a change well received by fans and critics. Hearing González’s haunting vocals bounce off the walls and into your ears, no matter whose song he’s singing, is a treat. Nicholas Bostick


John Maus
9 p.m. Friday, Feb. 2, Club Dada, 2720 Elm St., 214-742-3400 or dadadallas.com, $13/$15
Until last year's Screen Memories, it had been six years since synth-pop intellectual John Maus released an album. The years weren't wasted, though. Maus created a modular synth from scratch that he used on the album and earned his doctorate in political science. Ever the displayer of emotional musical performances, Maus has also been dubbed a professional existentialist. Diamond Victoria

John Flansburgh and John Linnell have been playing as They Might Be Giants since 1982, and they’ve had no reason to stop. More so than any other band, They Might Be Giants’ music has made being into science and history cool. The band, known equally for its adult and children’s hits, will play a sold-out show at the Kessler, followed by a free show at Good Records the next day. For the set list, They Might Be Giants have more than 20 albums’ worth of material to choose from, including the recently released I Like Fun. Eric Grubbs

Cincinnati pop-rock group Walk The Moon is using this year's Press Restart Tour to do just that: restart and enter a new phase of its existence as a band. The band has been out of the limelight for the last two years as frontman Nicholas Petricca cared for his ailing father. Walk the Moon’s new album reflects those shifted priorities; it dials the energy back a bit and offers more contemplative lyrics. Even so, the band tore through an appearance on Dick Clark's Rockin' New Year's Eve, revving up the crowd and sporting its trademark war paint. Walk the Moon also has big plans for this tour, including a collaboration with creative content maker FragmentNine, which has provided a live-action spaceship and laser lights to the show. Jeff Strowe