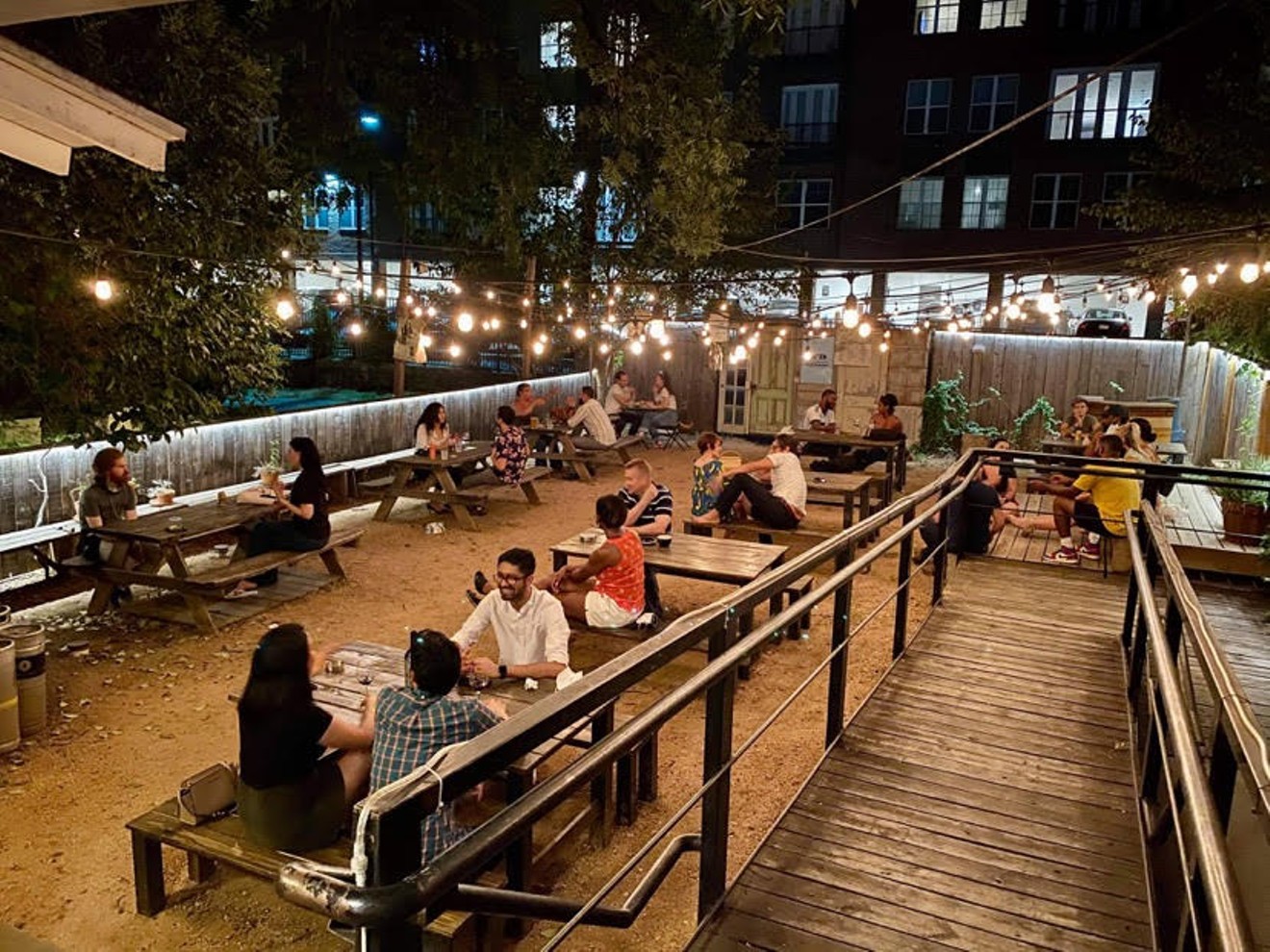 The patio tables at Wild Detectives will also be sneeze-guarded to help prevent the risk of COVID.-19 Javier Garcia del Moral
Most venues are trying their best, and some are even doing it right. Still, the words “COVID safety and precautions” have become the new “thoughts and prayers”; they may be filled with good intentions, but the practical results amount to a placebo effect at best.

Any weekend drive-by glance around Dallas music venues tells us that despite these well-meaning intentions to comply with safety precautions, people who are drinking are not good at maintaining social distance at bars (color us shocked). It’s not entirely venue owners’ faults that patrons won’t keep a distance — and certainly not their employees’, who are just trying to get by and do their jobs without getting berated by anti-maskers.

While music venues have weathered shutdowns, major losses and specific (near impossible) reopening rules, The Wild Detectives has a solid plan to keep crowds from mixing.

Before the pandemic, the bookstore/bar and North Oak Cliff gem hosted a regular roster of literary events, performances such as Shakespeare in the Bar and live music on its large patio.

The music series, which begins Thursday,  will have a capacity limited to 42 people per event, while all tickets will be numbered and seating will be assigned.

The tables are split with sneeze guards and benches that only seat two people from the same group (meaning they arrived together). This way, Garcia del Moral says, patrons will have no contact with anyone outside of their own party.

The tables are set six feet apart with full service provided, eliminating the need for parties to approach the bar.

“One of the main things of this initiative is to support the artists and the people that need live performances to make ends meet."  – Javier Garcia del Moral

The venue is accessible through the outdoor gates. The indoor bookstore is still open for business for patrons wearing a face mask.

To ensure that groups stay separated, Wild Detectives is not selling individual tickets. The minimum purchase is two tickets per table, so single patrons are not paired through seating with groups from separate households. If you decide to attend solo, you'll still need to pay for two tickets ($30).

“It works pretty much like a reservation restaurant on a patio,” Garcia del Moral says.

The proceeds to all shows go to the artists, sound engineers and bookers.

“One of the main things of this initiative is to support the artists and the people that need live performances to make ends meet,” he says.

The series’ focus is on music acts, such as local performers CAMÍNA, Lorelei K, Ginny Mac and Def Rain, who are playing separate dates in October.

"The idea is to have a performance every Thursday," Garcia del Moral says. "Right now, all the shows booked are music, but we expect to add theater, book presentations and discussions."

Through clever marketing and a loyal customer base, the boozy bookstore has managed to endure the last six months.

"Obviously, the pandemic hit us really hard," Garcia del Moral says, "but thanks to the new online shop and the travel agency prank we did, we were able to stay afloat during the shutdown."

The prank he's referencing was Wild Detectives' announcement last September that they would be turning their business into a travel agency. And the claim wasn't entirely false; they merely advertised the company as a service that allowed readers to "travel" through books, allowing them to pick a destination (such as New York) through their website and matching them with a book whose plot would take them there.

Wild Detectives reopened at the end of June, and patrons have been compliant and responsible, Garcia del Moral says.

"All in all, we can't complain considering the difficult times we are all going through," he says. "We are now very excited to have found a way to do live events without compromising safety, and we hope this can be a sustainable way until we can go back to pre-pandemic formats."
KEEP THE DALLAS OBSERVER FREE... Since we started the Dallas Observer, it has been defined as the free, independent voice of Dallas, and we'd like to keep it that way. With local media under siege, it's more important than ever for us to rally support behind funding our local journalism. You can help by participating in our "I Support" program, allowing us to keep offering readers access to our incisive coverage of local news, food and culture with no paywalls.
Make a one-time donation today for as little as $1.