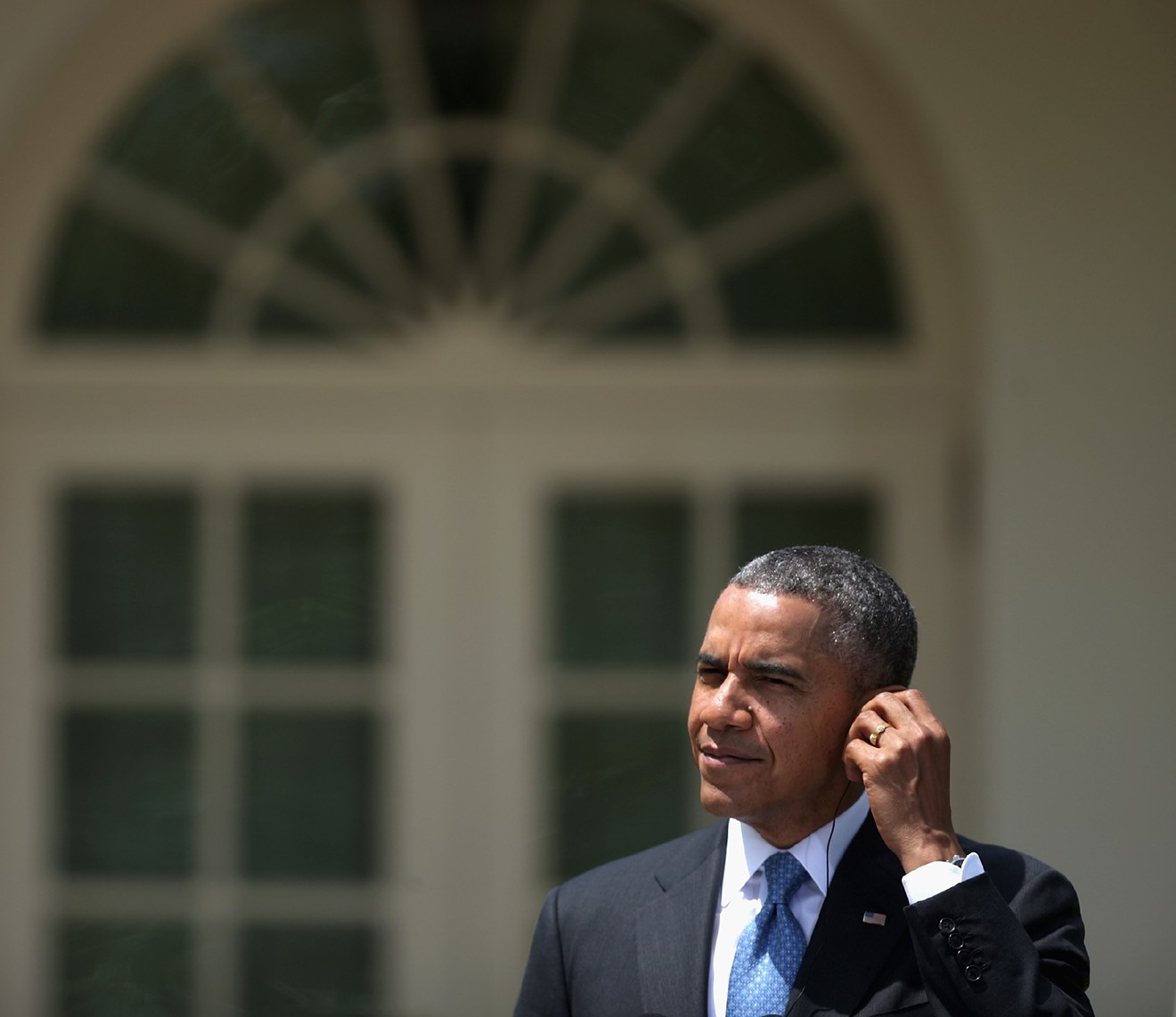 Former President Barack Obama pictured either talking to secret service or jamming some Leon Bridges. Chip Somodebilla/Getty
If your new landlord comes into your house once a month and dumps a frothy bucket of garbage on your bed, it makes any landlord that doesn’t pour trash where you sleep look like Desmond Tutu. It also helps bolster the previous landlord’s image when they have better taste in music and periodically convey that through the magic of playlists.

In case you’re somehow not following this vivid allegory, former President Barack Obama is the landlord that doesn’t defile the place where you spend one-third of your life. Obama was far from perfect, but he at least signifies a long-forgotten period of American history when the Oval Office was occupied by a constitutional scholar instead of a reality TV star who had sex with someone who had sex with Ron Jeremy.

On Monday, the former president shared his summer 2020 playlist. Periodic playlists have been something of a tradition during his post-president years, and they have each been a hodgepodge of hits new and old.

“Over the past few months, I’ve spent a lot of time listening to music with my family,” he said on Twitter. “I wanted to share some of my favorites from the summer — including songs from some of the artists at this week’s @DemConvention.”

Artists on this playlist who are playing the Democratic National Convention include Billie Eilish, John Legend, Billy Porter, Maggie Rogers, Common, Jennifer Hudson, and North Texas’ own Leon Bridges and The Chicks. The playlist also contains cuts from some of Obama’s longtime favorites such as Stevie Wonder and Bob Dylan, in addition to newer names like HAIM, Childish Gambino and Megan Thee Stallion. Among the 53 selections are some surprising numbers by comparably esoteric indie darlings, including Princess Nokia and Tank and The Bangas.

As we lay in our garbage-soaked beds with nothing but bittersweet memories of a more dignified era in American politics, let’s look back at some of Obama’s previous playlists as we rank them from best to worst (which, to be honest, is still pretty decent.)

On the other hand, this playlist brings us back to a simpler time when Low Cut Connie’s inclusion gave them a brief but significant career boost. It’s also impossible to go wrong with the Rolling Stones, Sly & the Family Stone, The Isley Brothers, Stevie Wonder and Howlin’ Wolf, but what’s perhaps most surprising is that Bob Dylan’s most punk song ever (“Tombstone Blues”) is the fourth track.
2.End of Year 2017
2017 was a year that saw noteworthy releases from the likes of Kendrick Lamar, Chris Stapleton, SZA and Harry Styles, and this playlist serves as a proper recognition of this fact. There’s little filler to be found here, but we would have gone with a different Bruce Springsteen song. Not that “Born in the U.S.A.” isn’t worthy of celebration, but “Badlands” or “Cadillac Ranch” would have been way better bookends.
3.Summer 2016
As this playlist’s selection of Leon Bridges and Gary Clark, Jr. clearly proves, Obama has a soft spot for newer artists who rekindle the old traditions of blues and R&B. He also gives due recognition to the latter genre’s pioneers by including Nina Simone and Aretha Franklin.

Fiona Apple is certainly a nice touch, but the playlist could have benefitted from better Beach Boys and Miles Davis songs than those selected (“Good Vibrations” and “My Funny Valentine,” respectively.) Obama could have at least opted for a deep cut on the former’s album Pet Sounds, or anything from Davis' albums Kind of Blue, Sketches of Spain or Bitches Brew.

Been waiting to drop this: summer playlist, the encore. What's everybody listening to? pic.twitter.com/mqh1YVrycj

Obama’s loyalty to what Dan Quayle once called “the great state of Chicago” is on-the-nose with his frequent inclusion of Chance the Rapper on these playlists, but for this one, he saw fit to include BJ the Chicago Kid.

If you asked us last year where we stood on this playlist, we would have probably given greater praise, but the luster of Lil Nas X’s “Old Town Road” and DaBaby’s “Suge” have been worn out at this point. Still, big ups are due for Obama’s inclusion of The Highwomen, Mavis Staples and Sharon Van Etten.
KEEP THE DALLAS OBSERVER FREE... Since we started the Dallas Observer, it has been defined as the free, independent voice of Dallas, and we'd like to keep it that way. With local media under siege, it's more important than ever for us to rally support behind funding our local journalism. You can help by participating in our "I Support" program, allowing us to keep offering readers access to our incisive coverage of local news, food and culture with no paywalls.
Make a one-time donation today for as little as $1.