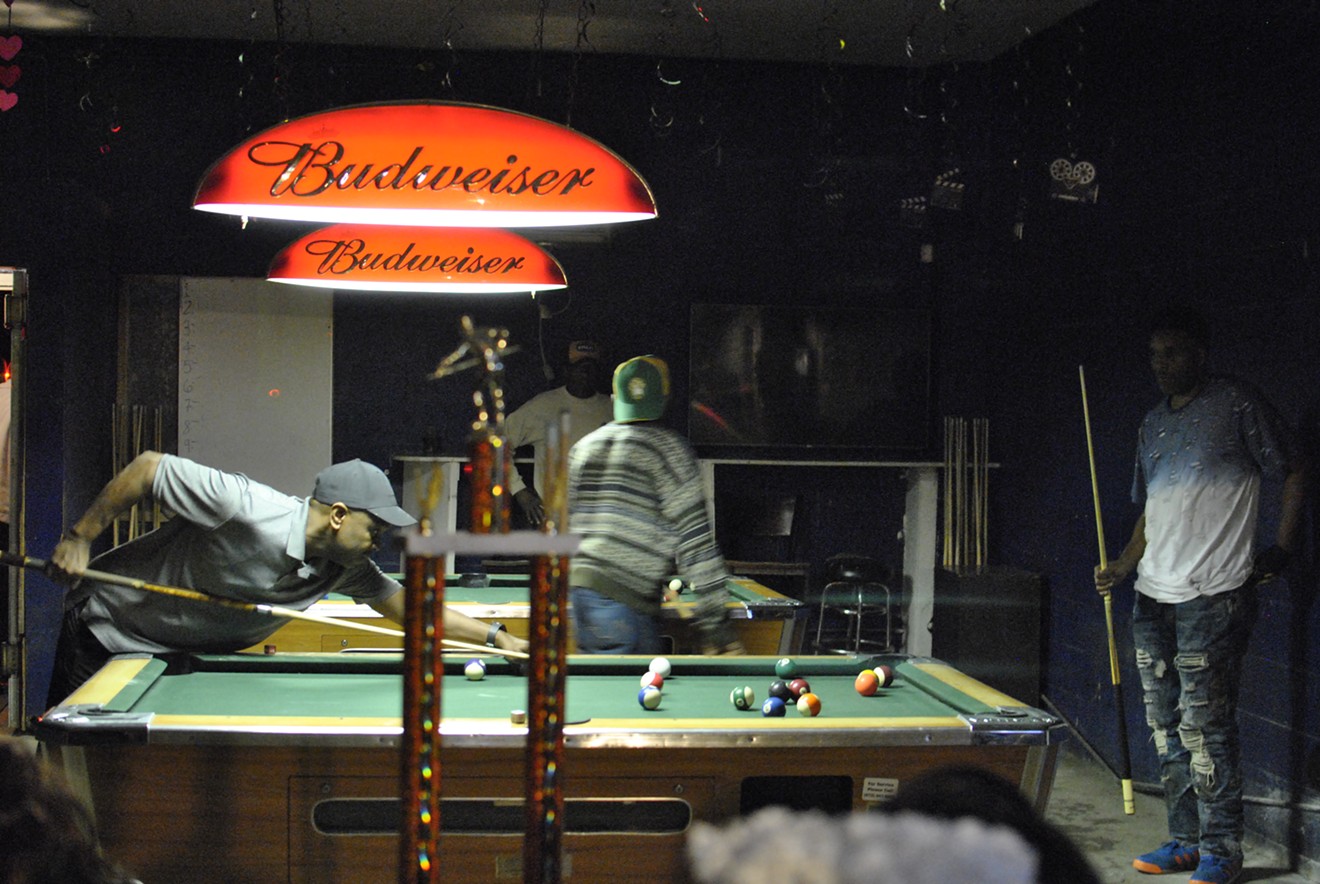 The House That Jock Built has been a home away from home for many in South Dallas. Brittany Nunn
For decades The House That Jock Built has been more than just a club; it has been a second home to many in South Dallas. By day it’s a youth hangout spot, and by night it’s a dance club/pool hall for adults. But after surviving 45 years in business, Dallas construction and internet rumormongering could now be its undoing.

Raymond and Frances Jacques opened The House That Jock Built in South Dallas in 1972. At the time it was located around the corner on Hatcher Street, until the mid-’80s when they moved it to where it sits today at the corner of Starks and South Central Expressway.

Raymond Jacques had a big vision for the club. He wanted to help his community, to provide a safe place for both children and adults to hang out and have fun, which was something he didn’t have growing up. He grew up in Bonton, one of the poorest and most crime-stricken communities in Dallas. In the 8th grade he dropped out of school to start working in order to help support his family, which was so impoverished people called him “Rags.”

“They called him that because they were so poor his clothes were always real raggedy,” his daughter Pamela Jacques explains. “He always had to work hard to help out and help raise his other brothers and sisters. He had a giving heart.”

As an adult, he wanted to expand his impact beyond his family. “During the day, he was a truck driver,” Pamela says. “He delivered meat, and then my mom was a cafeteria worker in James Madison High School. They both cleaned buildings at night until they raised enough money to open the business.” She was only 10 when her parents opened the club, but she hasn’t forgotten what it was like to witness her dad turn his vision for the club into a reality.

The House That Jock Built became a home away from home for many young people, and Raymond — who was known for his big, booming voice that quieted youngsters with ease — effectively raised several neighborhood children. They served soul food all hours of the day and night, to both paying and nonpaying customers. “If someone was hungry — didn’t matter who they were — if they needed food, they could come and it was always open to them,” Pamela says.

There was live music in the evenings. Raymond loved giving up-and-coming talent a place to play and develop an audience. The Dallas-based American Blues Singer Z. Z. Hill got his start playing there in the ’70s and early ’80s. More recently, Raymond helped his grandson and Pamela’s son, Vaylan Jacques, to launch his hip-hop career as V-Dogg Da Rebel. Vaylan starred in two independent films and is best known for his work with Layzie Bones of Bone Thugs N Harmony.

Raymond died in 2008, but he left his legacy and the club to his children. “They keep it going the same way he ran it today,” Pamela points out. Patricia Ann Jacques helped her dad run the club for 20-plus years before he died, and she primarily runs it now, along with her sister Cynthia Jacques and Wanette McDonald.

However, that has been harder and harder to do in recent years. For the first year after Raymond passed away, business slowed down. His children were able to revamp the club, but they had to make some changes. They cut back on hosting live bands, so most nights are driven by a DJ instead. When Raymond was alive, he served beer and he also allowed people to bring their own drinks. It became too expensive to renew the alcohol license after he died, so now the Jacques family operates the club as BYOB only.

Then in 2013, the Texas Department of Transportation and the City of Dallas proposed plans to construct a roadway ramp connecting Interstate 45 and United States Highway 175. The project, called S.M. Wright Project, began last summer, and by 2019 the highway connector will be creeping right by the club. It will be above them and a touch to the north. “Everything will be over us and around us,” McDonald says, so they shouldn’t have to close or move the club, but the repercussions of the construction is another story.

Starting around the first of the year, there has been a steep drop in business. “A lot of people came through and thought we were closed,” McDonald points out. “It only takes one person to say it, like on Facebook or something, and then other people see it and word gets around. We’ve been trying to get the word out that we’re not closed.”

It has been an uphill battle, especially since Yelp also states the location is closed. The owners were unaware of this until we asked how long their Yelp page has misidentified the club’s status. The club doesn’t have a Facebook page, so as far as anyone on the internet can tell, the location is closed — except it isn’t.

“The newer crew that we’ve had since daddy died, they’ve moved on because they thought we were closed,” McDonald says. “We still have a few of the regulars that come in the evening time.”

They’re doing what they can to drum up business. They host activities like bingo and card games. They recently held a pool tournament between the South Side Kings and the Band of Brothers, and they continue to have live bands whenever they can. Whether or not the Jacques family will be able to pull the club out of another dip in business is yet to be determined, but they have done it before. “We’re just trying to keep his legacy going,” McDonald concludes.