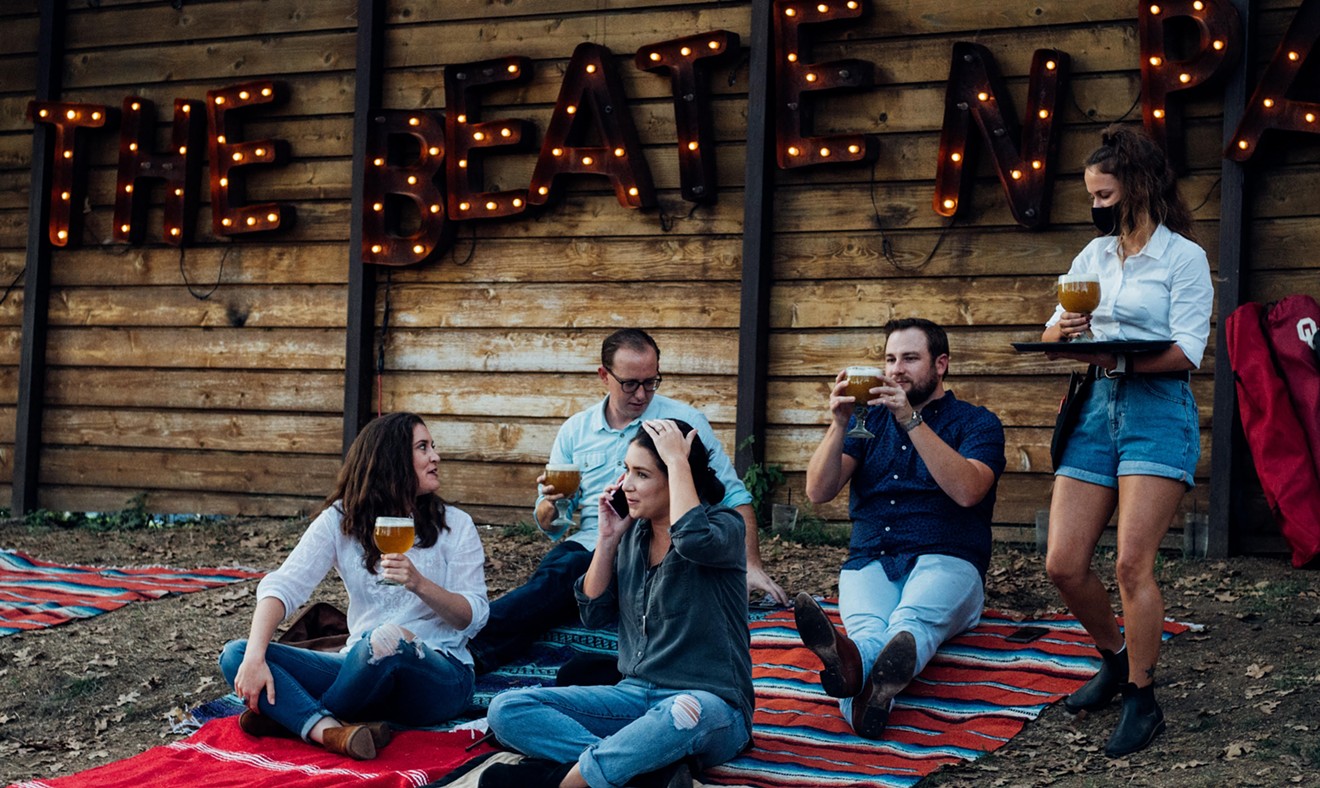 How safe are socially distanced concerts? We found out at The Rustic's new live music series series. James Coreas
Pre- and post-pandemic worlds greeted each other in an awkward handshake-turned elbow bump at the first concert of The Rustic’s Safe Sounds Music Series on Thursday night.

On their website, the popular Uptown restaurant and music venue describes their new endeavor as an “intimate, seated dinner” where guests can “experience live music in [a] socially distant and safe environment.”

In the press release, The Rustic’s creator Kyle Noonan says, “At The Rustic, music is part of our DNA, and we are proud to offer this series as a way to support musicians during these difficult times.”

The only thing that seemed difficult at Thursday night’s inaugural sold-out show was the understanding of mask rules and etiquette. Otherwise, the living felt pretty easy. With squinted eyes, one could almost make out some semblance of normal life.

Servers were in top form, delivering trays of food and drink with all the professionalism and choreographed grace of Daddy Warbucks’ staff welcoming Annie to her new mansion home.

The new drink special, Rustic Waters, is essentially their take on hard seltzer. Your spirit of choice gets dressed up with bitters and a twist of citrus and is served with a bottle of club soda on the side. It’s a refreshing pick to sip while waiting for the afternoon sun to subside. At last, the sky grew dark and an autumn chill set in.

QR code menus and server call buttons on each table aimed to create a more seamless experience, though the servers were so attentive, the buttons were rarely needed.

For those in the mood for a quintessential Texas-chic experience in Dallas, The Rustic delivers the best. You’d be hard-pressed to think of a better way to usher in cooler weather than munching on tempura-fried cactus with spicy ketchup and sipping local craft beer in a giant glass goblet.

In terms of safety protocol, the staff made an effort to keep surfaces clean and safe by wiping down tables and door handles with rags and bottles of cleaning solution.

Due to the number of picnic tables in the outdoor space, the scene couldn’t exactly be described as intimate. However, the spacing appeared to work. Tables essentially acted as social bubble containers when guests were seated. It became clear why standing room shows remain out of the question at this point in the pandemic.

Around the perimeter of the yard, stylish Mexican-style blankets marked designated lawn seating.

The Rustic staff wore uniform black masks, designed to stay in place. There’s nothing more frustrating than a mask that keeps slipping down and constantly needs to be readjusted, and the venue seems to have avoided this problem.

Guests, on the other hand, lacked the same level of uniformity both in mask style and in their commitment to wearing them.
click to enlarge

Concerts are back on at The Rustic.
James Coreas

Rules for The Rustic’s Safe Sounds Music Series clearly state that “guests will only be allowed to walk around when entering, exiting or going to the restroom in which they must be wearing a mask.”

At least 10% of attendees had a hard time complying with this rule. A variety of methods of rebellion could be observed, including, but not limited to: ear dangling, chin hammocking, crumpled up in hand and altogether absent. One man demonstrated a bewildering first, holding one end with his fingers and the other (kid you not), pinched between his lips.

While it’s likely difficult and potentially dangerous for staff to try to enforce mask rules, a few noncompliant guests appeared to receive some gentle coaching from one of the senior staff members.

If a live music event is going to work anywhere during a pandemic, it’s going to work at The Rustic. Their spacious outdoor seating area allows for open air socialization. The sound quality is clear no matter where you are situated in the venue, and the volume level is always appropriate.

As for the music itself, while the quality met the venue’s usual high standards, audience reception was lukewarm at best.

Supporting act Mike Randall entertained early arrivers with an assortment of original music and cover songs, served up with a side of endearing wit. His two children sat quietly on the side of the stage until called up to accompany him on his last two songs. This was obviously as adorable as hell.

Folk singer-songwriter Thomas Csorba, who filled the opening slot before the headliner, offered insightful storytelling with a softer touch. Sadly, the audience failed to pay him the attention he deserved.

Headliner Jason Boland and The Stragglers certainly had some fans present, evident on the few occasions he invited them to sing a few measures on their own. In those moments, a moderately enthusiastic chorus of voices rose briefly above the chatter.

Mostly, attendees continued to socialize amongst themselves even throughout the headlining act. Occasionally, heads would turn toward the stage, bob up and down and mouth lyrics along with the band. One creative fellow pretended to dance with his date while both stayed seated, ending his bit with a tender dip.

By far the most robust audience response followed Boland’s hit, “Somewhere Down in Texas.” Overall, though, the atmosphere could only be described as tame and indifferent.

Hopefully, this display is not representative of the future of live music and the virus will someday release its grip on society. But until it’s safe to return to traditional concert-style events, we must come to a widespread understanding of proper safety protocols and demonstrate a higher level of respect for musicians, staff and fellow patrons.

Venues and musicians are clearly ready to provide rich and enjoyable experiences for audiences again. However, a cultural shift is needed so that we can continue to have nice things like The Rustic’s Safe Sounds Music Series.

Practice Safe Sounds for yourself with the excellent Grady Spencer & The Work and Blue Water Highway on November 5. Tickets are on sale now.
KEEP THE DALLAS OBSERVER FREE... Since we started the Dallas Observer, it has been defined as the free, independent voice of Dallas, and we'd like to keep it that way. With local media under siege, it's more important than ever for us to rally support behind funding our local journalism. You can help by participating in our "I Support" program, allowing us to keep offering readers access to our incisive coverage of local news, food and culture with no paywalls.
Make a one-time donation today for as little as $1.