‘I’d Like to Speak With the Manager!’ A Journey Through North Texas Venues’ Social Media Reviews 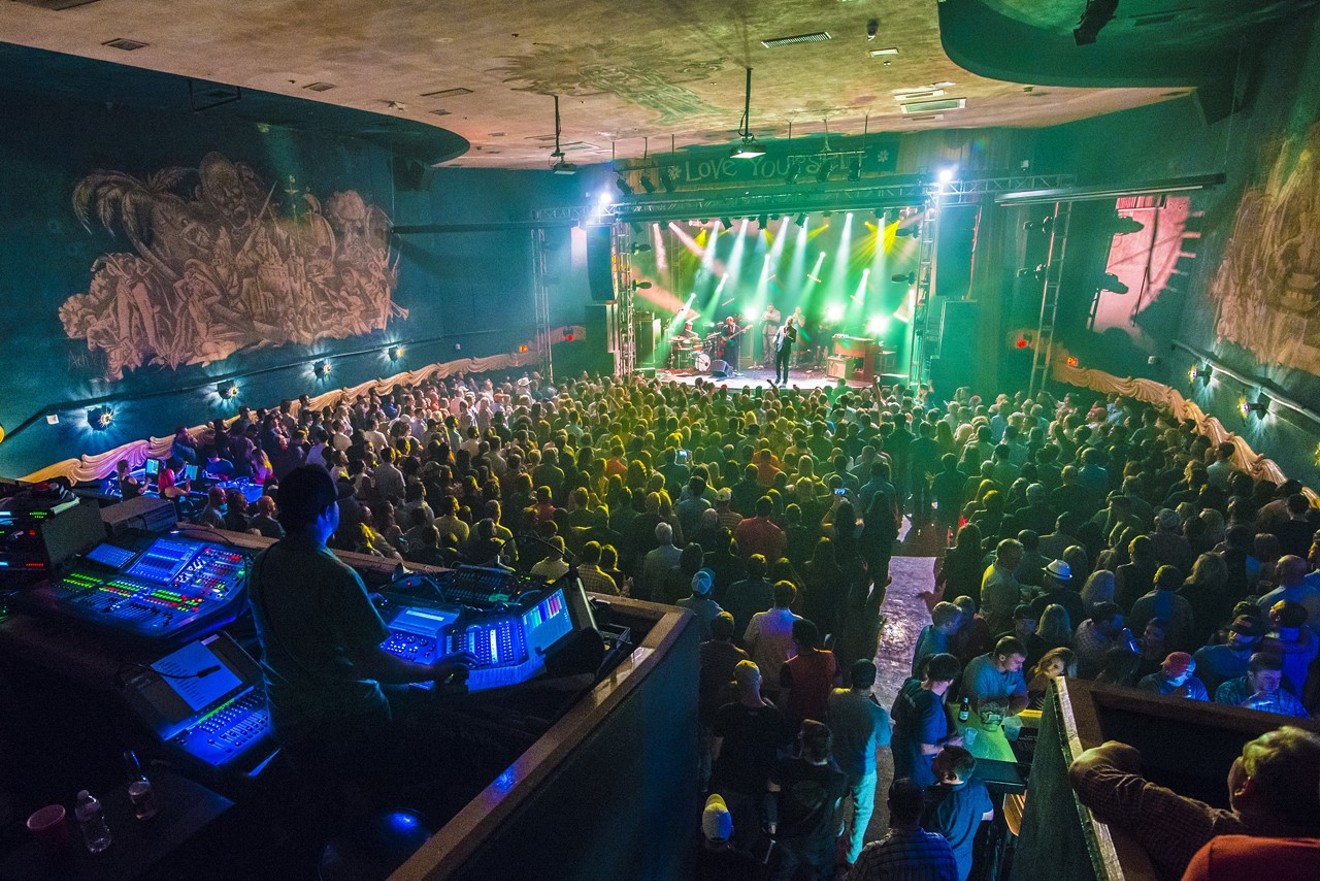 The Granada Theater is one of the Dallas venues that received confusing feedback on social media. Can Turkilymaz
Opinions — everyone has them. Some, like those that are constructive or well-intentioned, can make a positive difference. On the other hand, too many folks fire off hot takes with all the care of someone tossing a bag of trash into the dumpster. And, just like dumpsters contain the discarded remnants of refuse, our social media platforms serve as an amazing receptacle of the innermost and most profound of thoughts.

One of the most frequent targets of opinion barbs are our local music venues. Whether the performer onstage was a smashing success or a boring dud, attendees often feel the need to air their grievances over some perceived or imagined slight. Whether the bartender failed to smile enough, the bathroom lacked the properly scented soaps or the parking lots proved too far away to navigate, some people won’t think twice about griping. Sure, there are legitimate reasons to vent: Venues tripling the price of a bar tab or blatantly drunk fans left free to plow their way through the crowd are two examples of when to file a complaint. But, much of what passes for wall commentary is downright hilarious. With these thoughts in mind, let’s take a look at some pointed and interesting comments patrons have left on the social media walls of local music venues.

Three Links: “A Ragamuffin Hipster Bar.”
Three Links in Deep Ellum is decidedly old-school. With its minimal space, tightly cornered stage and open-windowed setup, it can be a place where you start the night out with some live music or close things down later with gnarly punk rock. The venue's centralized location on Elm Street also makes it a good place to gawk. Facebook commenter Matt sees the benefits of this arrangement, calling Three Links the “greatest bar in the great nation of Texas. If you like punk rock, cheap alcohol, and a good time. It should be the first stop on a night out and a last spot before calling it a night.” Fellow enthusiast Tara Belle agrees, but takes things even further: “Who tf doesn’t like this venue. If you don’t you’re a pussy. Get rekt!” There ya go, Tara Belle! On the other end of the spectrum, though, is Facebook commenter Scott. He seems a little confused and a bit contradictory as he begins with a backhanded compliment: “I'm surprised how trashy this place became. That's not necessarily a bad thing. In its first incarnation as a new live music venue in the dawn of Deep Ellums rebirth the place was new shabby chic, with great bands.” He quickly shifts gears and expresses displeasure with what he perceives is the bar's misguided direction: “Now the place has become a ragamuffin Hipster bar, still with bands, and perhaps even busier.”

The Granada Theater: “A Dance Floor is a Wood Floor That is Specifically Designated as Such.”
One of the crown jewels of the Dallas music scene, Greenville Avenue’s converted movie theater dates to the 1940s, with modern upgrades designed to keep that vintage style intact. They book a wide range of genres and tend to attract true music aficionados. Sometimes that can backfire on a venue. Here’s commenter Albert: “So many good things about this venue. It's a perfect size hall, the angle of the floor gives great site lines, the bar staff is always nice, great photography of shows, prices are reasonable, but the killer to this whole deal is the sound of the room is horrendous. I've been to a few dozen shows over the years and the acoustics are just consistently bad and for me it's just become a deal breaker for choosing to attend a show there or not. The Sundown at the Granada actually has better sound. Please invest in improving this.....please.” In a later thread, commenters Dusty N Miranda and Adam opine back and forth on the interpretation of a dance floor. Dusty: “Too bad they don't have a dance floor Went to see Sam Riggs last night our first time had to dance in the middle of people and get them to spread out and made our own. Will go back again but definitely would have had a lot more fun if people weren't on 'our' dance floor. Lol.” Adam: “The whole floor is a dance floor!” Dusty: “Yes I understand they have “wood flooring” that does not make it a dance floor. A dance floor is a wood floor that is specifically designated as such. Aka a roped off or sectioned area to do just that DANCE and normally we add an element to the floor to aid in movement such as powder floor wax.” To his credit, owner Mike Schoder goes out of his way to interact in a measured and respectful manner with his commenters. He calmly explains any misunderstandings, apologizes for any perceived misjudgments and corrects people with factual statements. With great things comes great responsibility, and in the case of customer service, Schoder is truly doing God’s work.

“He then said he was going to expose himself to the crowd and urinate in a beer bottle.” — Nora Sue from the internet.


Double Wide: “Ever See Art Made Out of Toilets?”
Nearly all of the Deep Ellum venue’s ratings on Yelp are stellar. Most comment on the eclectic vibes, the pleasant diversity and the laid-back, helpful bar staff. Another favorite is the YooHoo YeeHaw, the legendary “white trash” influenced take on a White Russian. As commenter Michaela states, the drink is “a taste of your childhood and adulthood mixed together.” Double-Wide wears its dinginess on its sleeve, so if you’re a dive bar beginner and a little nervous about taking your first steps inside, allow Terri J. to persuade you: “Ever see art made out of toilets? Ever danced with a guy with one leg but four teeth? THEN YOU AIN'T LIVIN' PADRE! Chances of seeing the real life Wooderson? Pretty good. Better in Austin, but not unheard of. Chances of hearing 'get 'er done'? Almost definitely. Chances of loving every second? Absolute.”

House of Blues: “What Great Communication Skills and Positive Attitude This Young Lady Has!”
It’s easy to take jabs at the venerable House of Blues, and its corporate structure is a good start. The commercialized swag, the barrage of professional advertisements displayed on all screens and the solemnity of the décor are all good points to pick on. A trip to any of their many U.S. locations can feel like a trip to the Mall of America. Nevertheless, the company's industry clout has the status to snag consistently strong touring bands so often that you have to take the plunge sometimes to see someone you truly want to see. This is also another venue that earns bonus points for having a responsive customer service team that takes time to respond professionally to the barrage of social media comments sent their way. HOB even took the time to respond to Yelper Shannon B., a patron who seemed to be a bit confused as to what type of “establishment” she was frequenting: “My husband and I have never visited a House of Blues until recently. We did not know what to expect! Our server Lexi can best be described as a box of chocolates ... at first you don't know what chocolate you're about to eat ... and we weren't sure what type of experience we were about to have with Lexi but we were VERY pleased. What great communication skills and positive attitude this young lady has!! She had us laughing the entire time! On a side note her makeup was quite impressive but I must point out that my eyebrows are slightly better than hers....We look forward to coming back to HOB for a concert soon. (Hopefully Lexi is there) give that little lady a promotion :D”

Take these comments for what you will. There will always be dissatisfied customers and those who try to make mountains out of molehills. If a location receives consistently negative reviews, then there is usually cause for concern. Otherwise, like The Dude says in The Big Lebowski, “Well, you know, that’s like just your opinion, man.”
KEEP THE DALLAS OBSERVER FREE... Since we started the Dallas Observer, it has been defined as the free, independent voice of Dallas, and we'd like to keep it that way. With local media under siege, it's more important than ever for us to rally support behind funding our local journalism. You can help by participating in our "I Support" program, allowing us to keep offering readers access to our incisive coverage of local news, food and culture with no paywalls.
Make a one-time donation today for as little as $1.