For Ducado VeGA, the Stars Aligned in Dallas Funk-rocker Ducado VeGA says his inclusion in Deep Ellum 100's live show in honor of the neighborhood's 150th anniversary celebration showed him how much he missed being on stage. Jason Janik
Believe it or not, Ducado VeGA began his music career as a band nerd.

"I started out playing tenor sax in junior high school, he says with a laugh. "I moved to piano in high school, and guitar. Most of the instruments I play are self-taught. From there, I just kinda went crazy."

It's hard to picture the great funk-rocker from Shreveport, Louisiana, marching in straight lines in a neatly pressed band uniform. The beauty of his music lies in his powerhouse performances and daring sound, paying homage to greats like Led Zeppelin and Prince from beat to beat. But it's hard to deny the influence that such a disciplined music study had on Vega, who's a Dallas Observer Music Award winner and Deep Ellum 100 finalist. 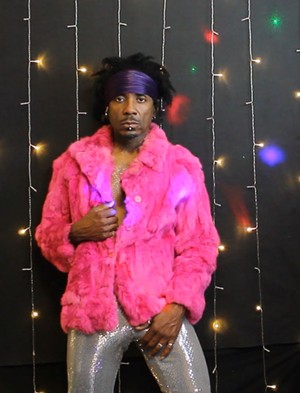 Ducado VeGA is a Dallas artist now.
Blu Deville
"I had a little bit of an advantage because when I started playing sax in junior high, I was learning music theory," VeGA says. "I had a little bit of piano because my mom was like 'you need to learn piano.' As far as learning instruments, they weren't teaching me what I wanted. So I just ditched it and kind of taught myself and my interest in everything exploded."

VeGA has tried to gain a musical foothold in some other big music cities, such as Detroit, Nashville and Atlanta, but Dallas — and particularly Deep Ellum — are the places that called to him since he watched his older brother Kevin perform a pantomime act of an Isley Brothers song that made him want to sing and make music for real.

"I always felt like I'm supposed to live in Dallas," he says. "It was defaulting back to that feeling as a kid and man, it just fell into place."

He first came to Dallas in 1993, and things started slowly as he recorded and experimented with his sound until he found his space in the local scene.

"Boom, it was like the clouds opened up and it was like your time," he says. "The stars aligned."

A set at Poor David's Pub introduced him to Jeremy “Pan Blanco” Piering of The Effinays, sparking a collaboration that would send him on his merry musical way.

"Me and Jeremy got to be friends in MySpace," VeGA says. "Jeremy from The Effinays gave me the invite to open for them and from there it just, again, the stars aligned."

The Ducado VeGA brand name got its official kick-off from that show, where he was paired up with people such as singer (and his future wife) Zenya Vi in 2010, following it up with a DOMA win in 2011 for Best Funk Group.

"We were different," VeGA says. "It's a funk-rock band, so we incorporated funk elements in everything from Prince to Zeppelin-ishness and some Stevie Ray [Vaughan] and [Jimi] Hendrix. We just threw it in a pot and we were about the clothes and style. It was crazy, cool music and everyone had their own personality in the band, and it all works. I think Dallas was ready for some craziness like that."

Things cooled down in 2017 when Vi was diagnosed with breast cancer, or the "C-word" as they prefer to call it, and both artists took a two-year break. Vi beat the disease, but she decided to take a behind-the-scenes role in music with a focus on recording for film and TV projects.

"It threw a monkey wrench into everything," he says. "Everything changed. So I stopped performing live and started DJing, which has been really cool and created a whole new life for me as [DJ] Ducado VeGA."
VeGA had another medical roadblock in 2020 before the pandemic when he broke his hip and femur from a bad fall but still went "back on stage in a week," he says. "People think I'm completely insane."

VeGA recently released a new single called "Underwater"; the video hits on Feb. 3. He also returned to live shows as one of Deep Ellum 100's 10 artists chosen to perform and record a live set for an album honoring Deep Ellum's 150th anniversary.

That concert reminded him how much he missed the immediacy and impact of performing for a live audience.

"It was an amazing night," VeGA says of the Deep Ellum 100 concert in October, which included Stone Mecca and Labretta Suede & the Motel 6. "I got to be in the company of some phenomenal musicians. I realized how much I missed that. I've seen musicians online but never met them in person. It was like so much love. I missed this, and I can't ever step away from it again."
KEEP THE DALLAS OBSERVER FREE... Since we started the Dallas Observer, it has been defined as the free, independent voice of Dallas, and we'd like to keep it that way. With local media under siege, it's more important than ever for us to rally support behind funding our local journalism. You can help by participating in our "I Support" program, allowing us to keep offering readers access to our incisive coverage of local news, food and culture with no paywalls.
Make a one-time donation today for as little as $1.