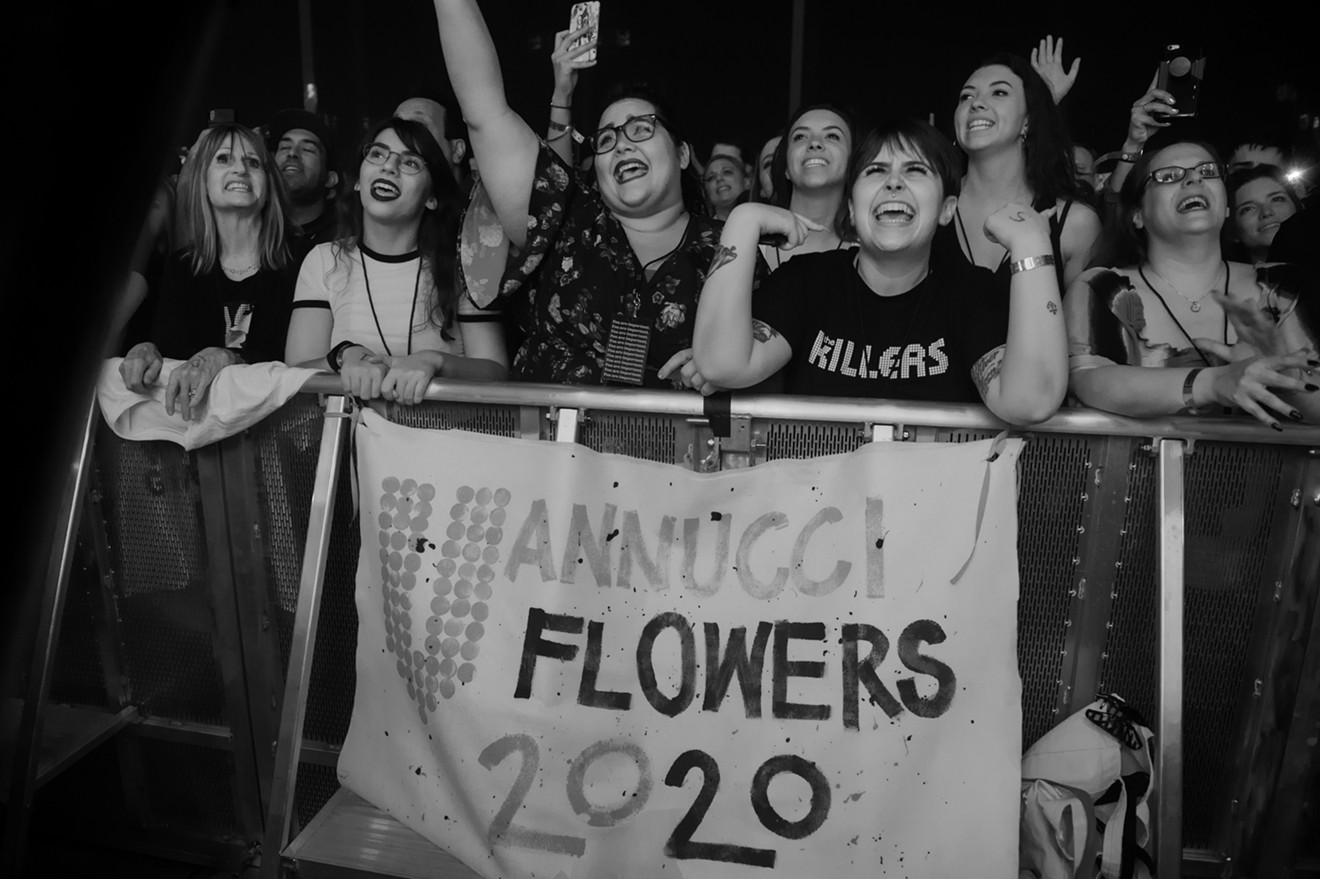 Rob Loud
Apropos to its suburban location, the Killers concert at Toyota Music Factory on Saturday was a family affair. Whether it was the children in attendance or the fact that lead singer Brandon Flowers is Mormon, the show felt like a PG-rated, family friendly rock concert.

Some of the kids in the audience looked to be fans of the Killers, watching the stage wide-eyed, while others were clearly dragged to the concert by their parents. The latter group spent time crawling on the floor between patrons to gather confetti or ribbon dancing with streamers shot from canons on the stage.

Flowers and crew ran through a handful of songs off last year's Wonderful, Wonderful. It's not a bad album, but it doesn't have the bangers and stirring lyrics that characterized the Killers' early work. “The Man” is infuriatingly paternalistic with basic bro lyrics, to boot: “I got gas in the tank/I got money in the bank/I got news for you baby, you’re looking at the man.”

A faux tower emblazoned with "Irving" flanked the big screens, a distracting and permanent reminder that Texas can be overly kitschy at times.

But as eye-roll-worthy as the lyrics are, it was hard to be mad at Flowers on Saturday night. The Las Vegas resident did his hometown proud and was delightfully showy. He stirred the audience into a frenzy by gyrating his hips and throwing his arms in the air, asking the audience for more.

The Killers seemed obsessed with gender Saturday evening. An oversized male symbol fronted the keyboard, on which Flowers played a smattering of songs, while female gender symbols fronted the mic stands for the three backup singers.

And the confusing imagery didn't stop there. Black-and-white stills of cowboys and Native Americans danced across the screen for “This River is Wild,” an acoustically muddy track that Flowers introduced by saying, “There's nothing wrong with the small town I grew up in [in Utah], but I'm busting my ass up here so I don't have to go back.”

It was even worse that a faux water tower emblazoned with “Irving” flanked the big screens, a distracting and permanent reminder that Texas can be overly kitschy at times.

The Toyota Music Factory is a fairly new venue, and a few challenges during the Killers' show suggest it's still working out a some kinks. 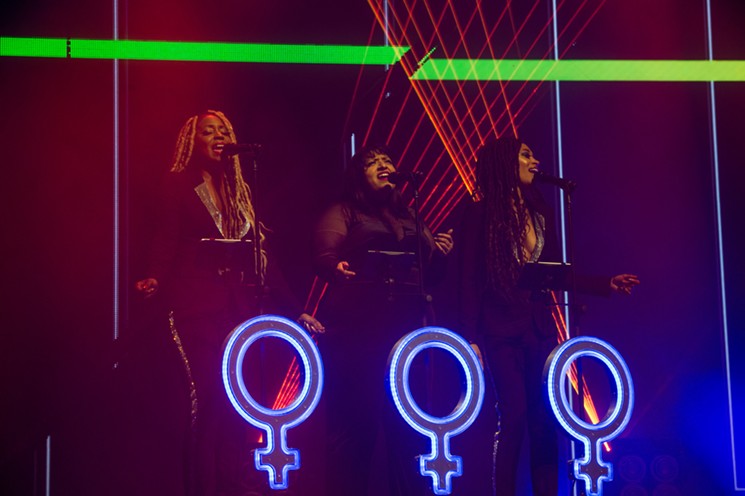 The Killers show was full of confusing imagery.
Rob Loud
The box office, among a row of fast-casual restaurants, closes soon after the headliner goes on, which frustrates latecomers.

On Saturday, some of the parking garage elevators closest to the venue were out of order, forcing concertgoers to climb three or four flights of stairs to reach their cars at the end of the evening.

The stage can be difficult to see from the pit area. The layout is a lot like Gexa Energy Pavilion, except that the area near the stage is standing room only. The ticketed seats are where Gexa’s lawn would be.

The upside of the design is that Saturday's sold-out show, which had a capacity of 4,000, never felt crowded. There was plenty of breathing and dancing room toward the back of the pit, and the large bar areas — which are close to the seating — were blissfully line-free during the show.

Some of the Killers' songs Saturday suffered from sound quality issues Google and Yelp reviewers have noted, but thankfully, the hits were spared. It's been a while since the Killers had a top 40 hit, so it's easy to forget they had so many. "Smile Like You Mean It,” “For Reasons Unknown,” “Read My Mind,” “All These Things That I’ve Done” and “Human” sounded as good and clear as the recorded versions. 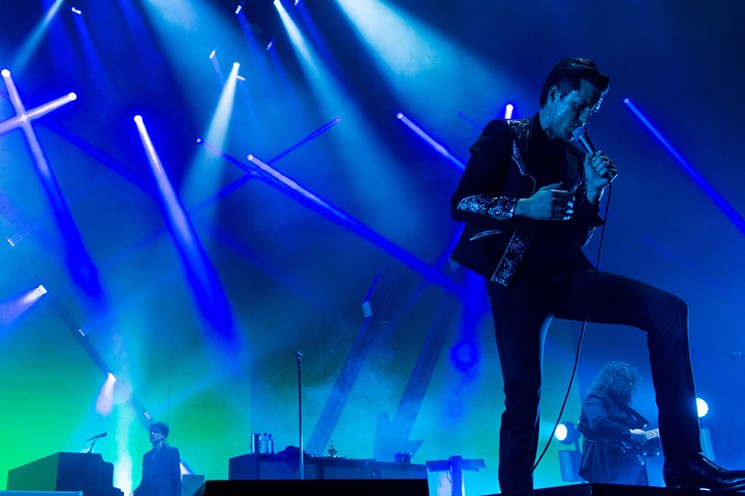 The capacity for fan participation wasn’t lost on the hardworking band, which often allowed the audience to fill in the vocals during choruses. During "All These Things That I've Done," the last song in the Killers' set, the band played backing music while the crowd chanted, “I’ve got soul but I’m not a soldier,” for an interminable amount of time. When it ended, a patriotic shower of red, white and blue streamers blasted from canons onstage.

After “All These Things That I’ve Done,” the drummer threw his sticks into the crowd, and the band left the darkened stage. The Killers eventually came back, but not before Flowers changed into a rhinestone-encrusted gold blazer and matching iridescent pants.

He looked like Elvis incarnate for the four-song encore, during which the Killers played “The Calling" (off Wonderful, Wonderful); “Andy Was a Star,” which Flowers said they used to play at Trees in Deep Ellum; “When You Were Young”; and their breakout hit from almost 15 years ago, “Mr. Brightside," which closed out the show.

“Mr. Brightside,” has stayed in the U.K.’s top 100 charts since it was released in 2004. The Killers left mainstream popularity almost a decade ago, but diehard fans walk among us and are keeping their legacy alive, as evidenced by the sea of Irving concertgoers decked out in Killers T-shirts and singing every word in the darkened arena.