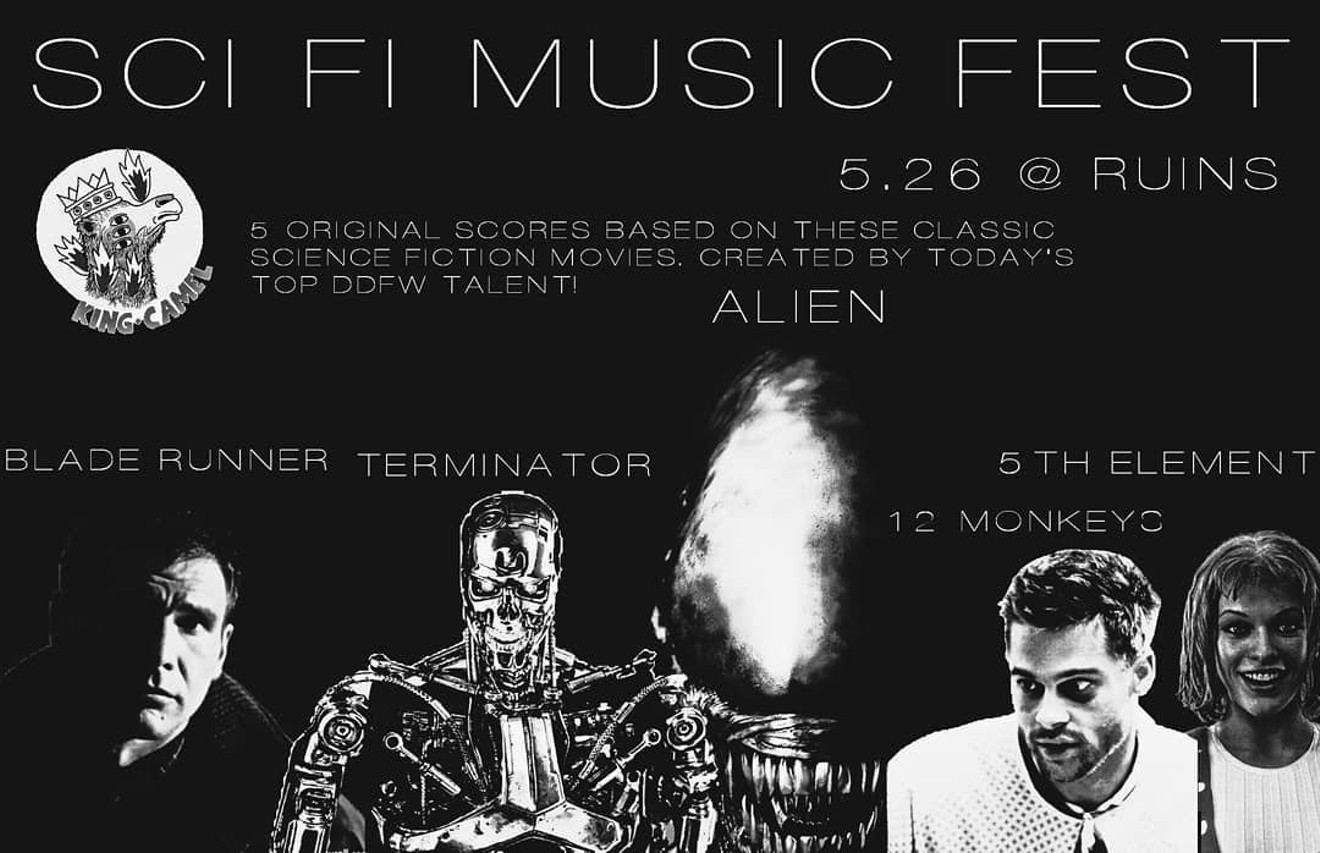 While some might have thought it would be another year before he delivered, that wasn't the case. In less than three months, Brown announced on social media that he was already at it again.

Last week, Brown gave fans the first hint of what was to come.

"We are pleased to announce SCI FI MUSIC FEST!!!" a social media post read. "We will have five acts, all specifically chosen by us from some of the greatest ddfw bands! All going down at our new spot RUINS on 5.26!"

Today, the Observer is announcing the full lineup of the five supergroups that will perform original music inspired by five classic science-fiction films: Blade Runner, Terminator, Alien, 12 Monkeys and The Fifth Element.

Sci Fi Music Fest will follow a similar format as Damn Fine Music Fest. Brown has selected five teams of musicians who have never played together, and each team will create a 25-minute original score based on one of the movies.


"I've always been a huge science-fiction and fantasy nerd. All these films, and many more, I've always celebrated as some of my favorites." – Jeff Brown

"I've always been a huge science-fiction and fantasy nerd," Brown says. "All these films, and many more, I've always celebrated as some of my favorites."

Although Brown had been mulling over the idea of another concept show, the prospect of producing them too frequently gave him some cause for concern.

"I didn't want to undermine the uniqueness of the shows," he says, "but I knew I could do something different using awesome sci-fi movies and new artists."

Brown has also decided to use a different venue for this massive event. While Damn Fine Music Fest was at Three Links, Sci Fi Music Fest will be at Ruins, which will open in April.

King Camel’s Locked & Loaded concert series has been at Armoury D.E., and hosting this new festival at Ruins is a way for Brown to continue the relationship and promote the venue.

“I wanted to put a show together that will pack it out so I can introduce DDFW to the newest and one of the coolest venues,” Brown says.

On the list of musicians are some familiar faces from Damn Fine Music Fest, including Dead Mockingbirds’ Kenneth Pritchard and Bargoyles’ Adam Locklear. But there are plenty of fresh faces, such as Michael Ortega of Aztec Death and Taylor Smith of Loafers.

There is also sure to be a bit of friendly rivalry among bands.

“Just a heads up, it's gonna be way dope,” Brown says.